Tunes for a Monday Morning
This animal body

Making sense of the more-than-human world 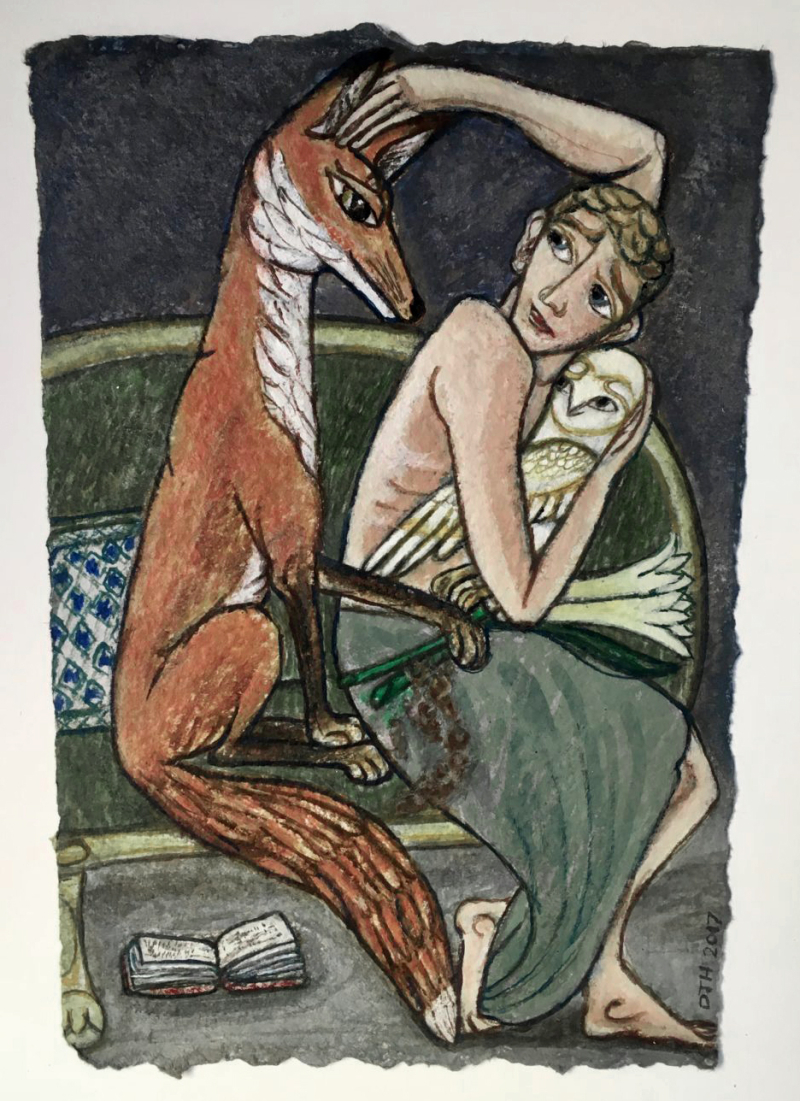 From The Spell of the Sensuous: Perception and Language in a More-Than-Human World by David Abram:

"A story must be judged according to whether it makes sense. And 'making sense' must be here understood in its most direct meaning: to make sense is to enliven the senses. A story that makes sense is one that stirs the senses from their slumber, one that opens the eyes and the ears to their real surroundings, tuning the tongue to the actual tastes in the air and sending chills of recognition along the surface of the skin. To make sense is to release the body from the constraints imposed by outworn ways of speaking, and hence to renew and rejuvenate one's felt awareness of the world. It is to make the senses wake up to where they are." 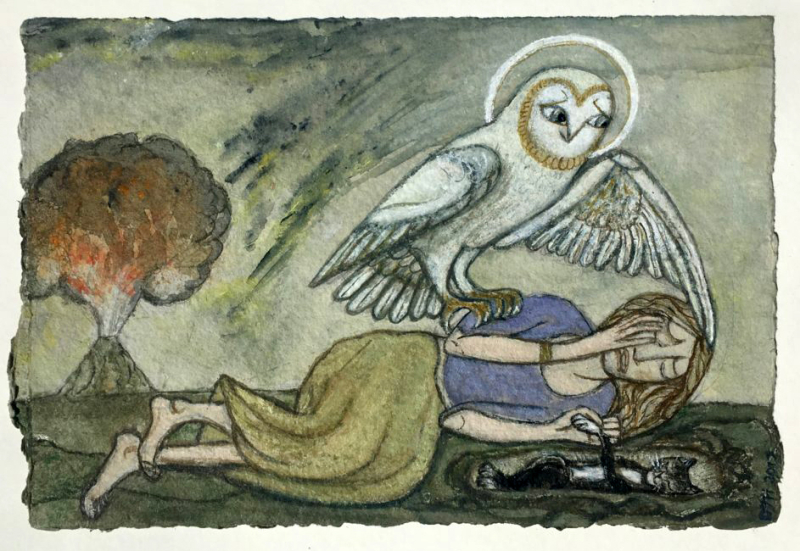 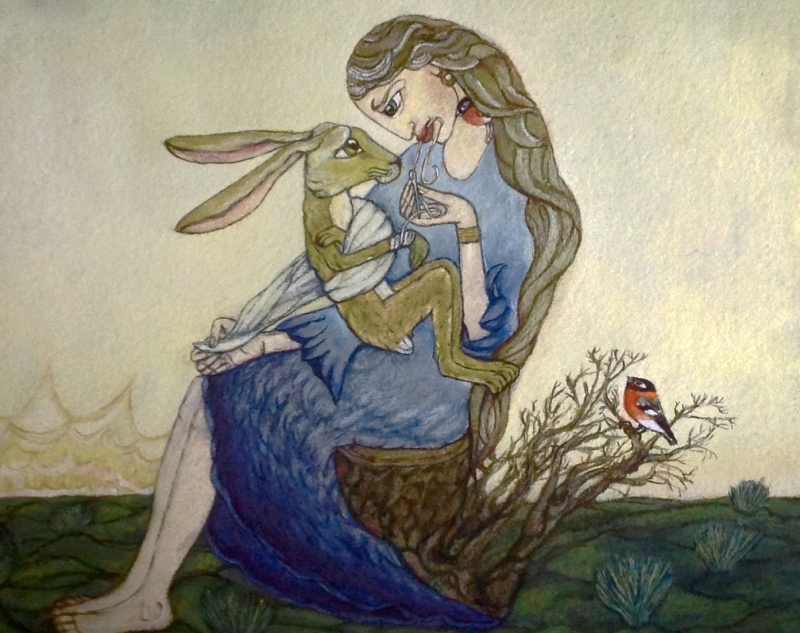 "Humans, like other animals, are shaped by the places they inhabit, both individually and collectively. Our bodily rhythms, our moods, cycles of creativity and stillness, even our thoughts are readily engaged and influenced by seasonal patterns in the land. Yet our organic attunement to the local earth is thwarted by our ever-increasing intercourse with our own signs. Transfixed by our technologies, we short-circuit the sensorial reciprocity between our breathing bodies and the bodily terrain. Human awareness folds in upon itself, and the senses -- once the crucial site of our engagement with the wild and animate earth-- become mere adjuncts of an isolate and abstract mind bent on overcoming an organic reality that now seems disturbingly aloof and arbitrary." 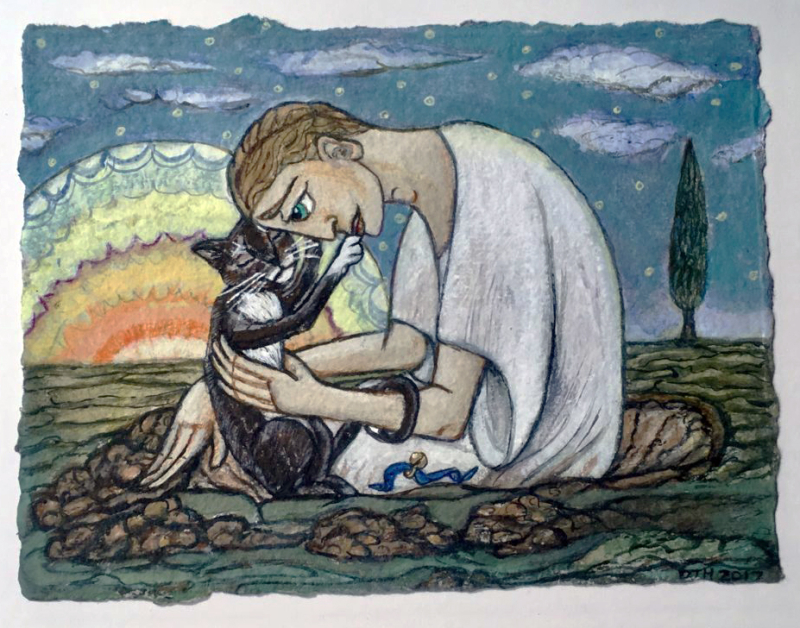 "The practice of realignment with reality can hardly afford to be utopian. It cannot base itself upon a vision hatched in our heads and then projected into the future. Any approach to current problems that aims us toward a mentally envisioned future implicitly holds us within the oblivion of linear time. It holds us, that is, within the same illusory dimension that enabled us to neglect and finally to forget the land around us. By projecting the solution somewhere outside of the perceivable present, it invites our attention away from the sensuous surroundings, induces us to dull our senses, yet again, on behalf of a mental idea.

"A genuinely ecological approach does not work to attain a mentally envisioned future, but strives to enter, ever more deeply, into the sensorial present. It strives to become ever more awake to the other lives, the other forms of sentience and sensibility that surround us in the open field of the present moment. For the other animals and the gathering clouds do not exist in linear time. We meet them only when the thrust of historical time begins to open itself outward, when we walk out of our heads into the cycling life of the land around us. This wild expanse has its own timing, its rhythms of dawning and dusk, its seasons of gestation and bud and blossom. It is here, and not in linear history, that the ravens reside." 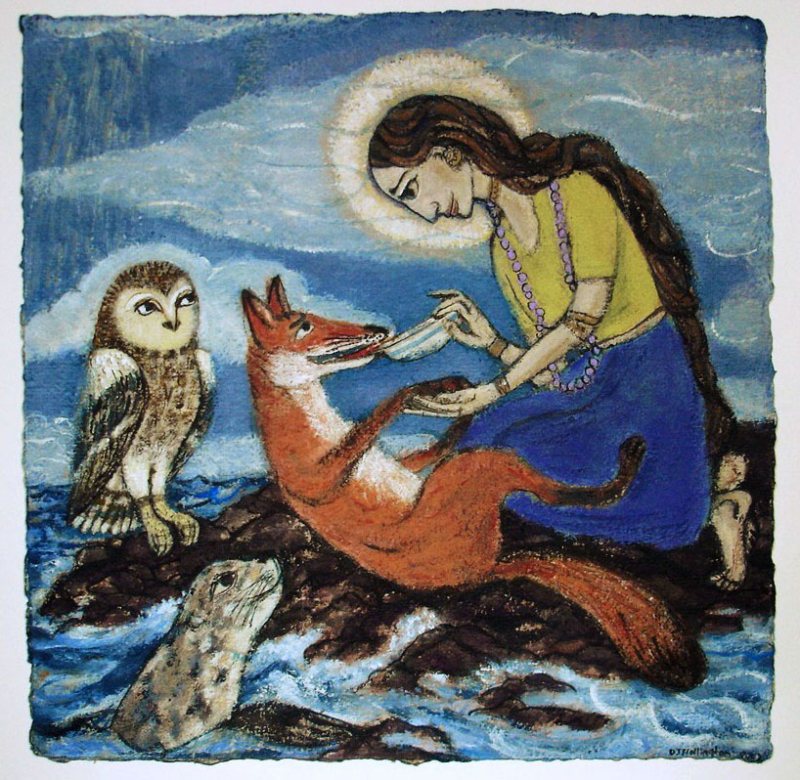 The marvelous art today is by British painter David Hollington. He studied at Harrow School of Art and at Central Saint Martins College of Art & Design in London, and is now represented by The Rowley Gallery.

"Animals and birds are messengers, healers and protagonists within the narrative structure of my paintings," he says. ""I feel closely connected to forms of Shamanism where a channel is opened between the human world and the world of animals. I can't control this process when I am drawing, objects that are undetermined, shift and change shape until I begin to understand what the message is that I am receiving. At this point a key animal will appear and take the lead, this will be one of my trinity - the fox, the hare or the owl (often white). Once the animal or bird has taken the lead it will engender the possibility of including a mortal or god, sometimes a Hindu or Celtic deity. Then the tone of the painting will crystallise, this can take a considerable time, sometimes months, but once it does I begin to see in colour and feel the time of day the story is taking place."F

Follow this link to read his wonderful meditation on the fox in folklore, literature, and art. 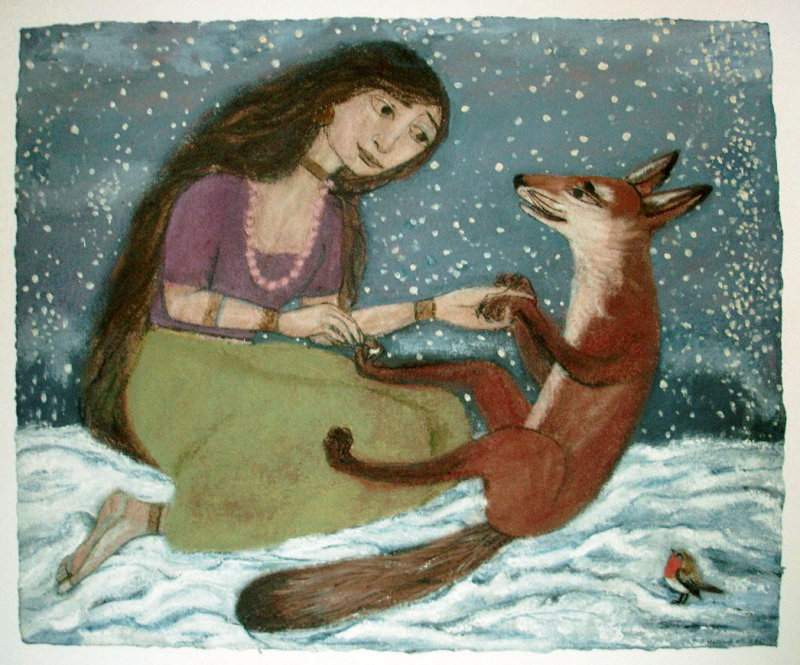 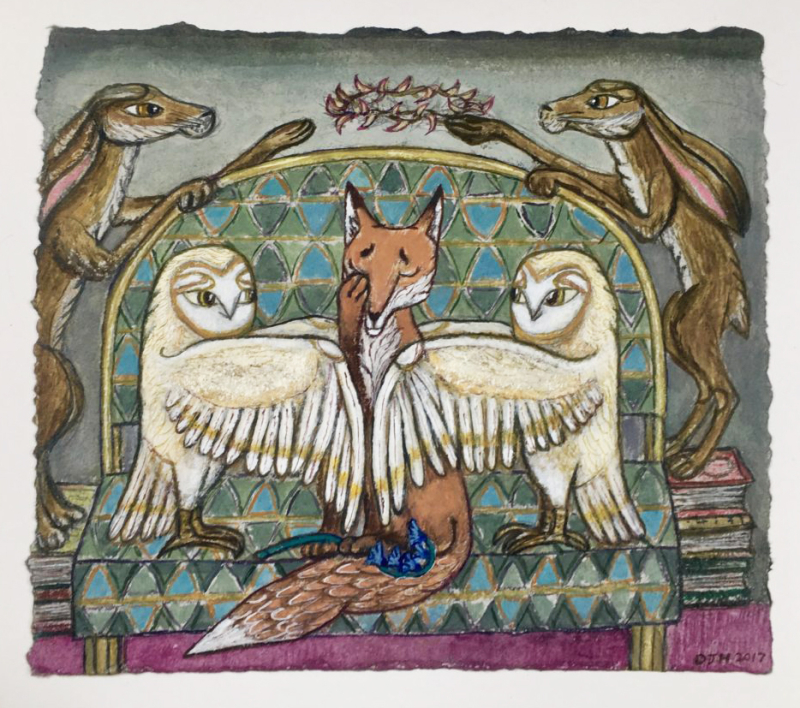 Words & Pictures: The passage above is from The Spell of the Sensuous by David Abram (Vintage, 1996), a book that has had a strong impact on my work since I first read it upon publication, and that I return to often. I highly recommend it, along with David's follow-up book, Becoming Animal. The titles of David Hollington's beautiful pictures can be found in the picture captions. All rights to the text and art above reserved by the author and artist.

what lovely images. thank you!