The Pre-Raphaelite aesthetic:
an alternative view
The art of creating a life 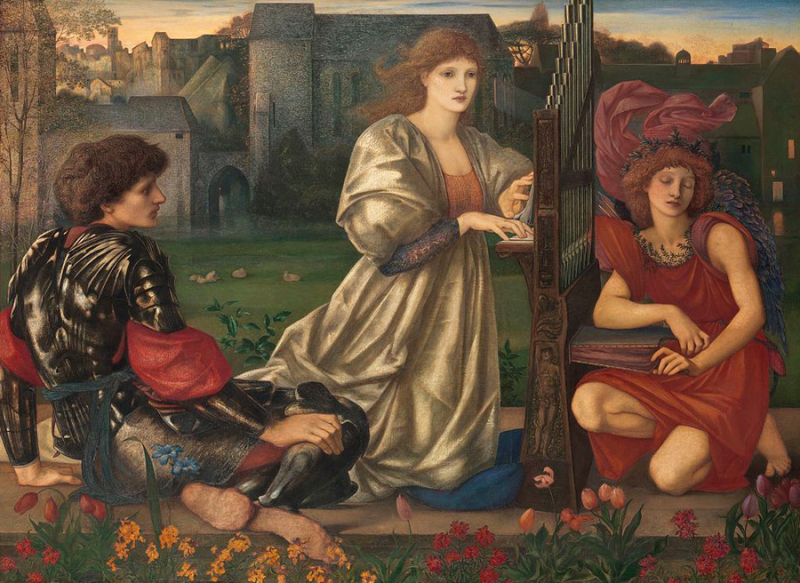 In her charming little book Three Houses, novelist Angela Thirkell looks back on the houses of her late-Victorian childhood -- including The Grange, an 18th century house in North End Lane in West Kensington, London, the home of Angela's grandparents: Pre-Raphaelite painter Edward Burne-Jones and his wife Georgie. 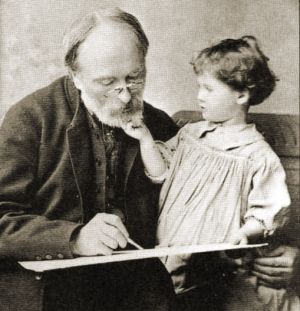 "On Sunday my grandparents kept open house," Angela remembers. "Two or three extra places were laid at lunch for any friends who might drop in, but whoever came, I sat next to my grandfather. I was allowed to blow into the froth of his beer, 'to make a bird's nest,' or to have all the delicious outside from the mashed potatoes when they had been browned in the oven. If, disregarding the truth, I said that at home my toast was always buttered on both sides, my statement was gravely accepted and the toast buttered accordingly. There can have been few granddaughters who were so systematically spoiled as I was and it is a legend that the only serious difference of opinion which ever arose between Gladstone and Burne-Jones was as to which of them spoiled an adored granddaughter more." 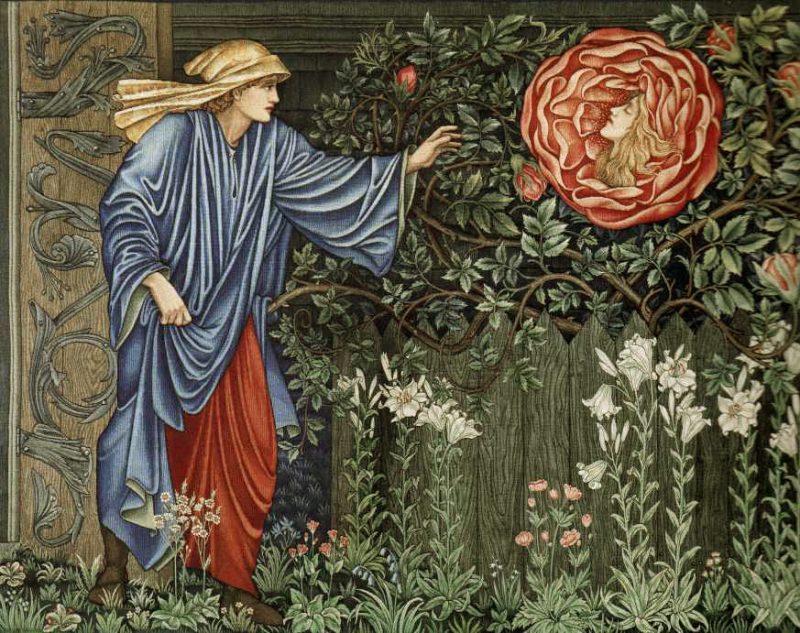 After lunch, the children were left to their own pursuits: to explore the house, play games in the garden, or sneak into her grandfather's Garden Studio: a long, white, rough-cast building between the orchard and the road.

"It was a little alarming to us: the red-tiled entrance and steps which led down to the furnace-room where we were never allowed to go and where anything, one felt, might live; the iron grills in the floor to let in the warm air for winter days; the tall narrow slit in the outer wall through which the larger finished pictures were passed. Sometimes those pictures went to exhibitions, but more often straight to the friend or patron (in the very best sense of the word) who had commissioned them and was content to wait for years if need be for the perfect expression of the artist's mind. 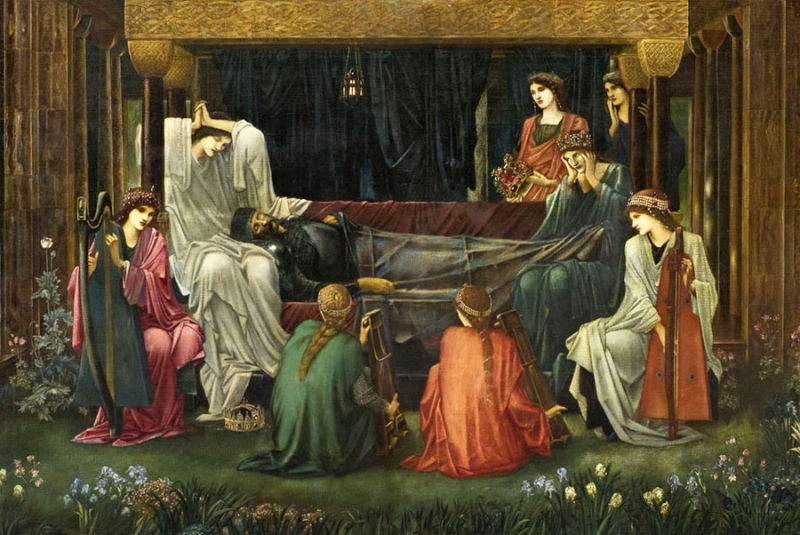 "In this studio there was a very high set of steps with a higher and lower platform on which the artist worked at the upper portions of his pictures. I remember sitting on these steps, my head wrapped in a many-colored piece of silk and bound with a coronet, while my grandfather made studies of crown and drapery for one of the mourning queens in the great unfinished picture of Arthur in Avalon which is now in the Tate Gallery. 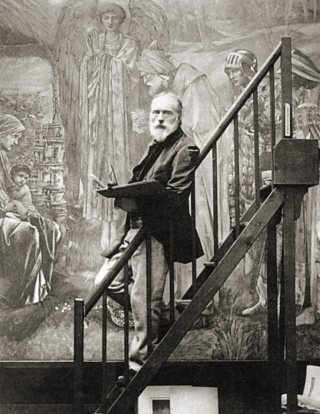 "Because there is a certain likeness between the little girl who wore the coronet and some of her grandfather's pictures, she has also been asked whether she sat to him. As far as I can remember he never used me for a model except on that one occassion when I wore the crown and veil. Nor in any case could he have drawn me often, as I was not yet eight years old when he died.

"Neither did my mother who was a pure 'Burne-Jones type' sit to him much. The curious thing is -- and it ought to open a fresh field of inquiry into heredity -- that the type which my grandfather evolved for himself was transmitted to some of his descendants. In his earlier pictures there is a reflection of my grandmother in large-eyed women of normal, or almost low stature, as against the excessively long-limbed women of his later style. But the hair of these early women is not hers, it is the hair of Rossetti's women, the masses of thick wavy hair which we knew in 'Aunt Janey,' the beautiful Mrs. William Morris. When I remember her, Aunt Janey's hair was nearly white, but there was still the same masses of it, waving from head to tip. To anyone who knew her, Rossetti's pictures -- with the exception of his later exaggerated types -- were absolutely true. The large deep-set eyes, the full lips, the curved throat, the overshadowing hair were all there. Even in old age she looked like a queen as she moved about the house in long white draperies, her hands in a white muff, crowned by her glorious hair." 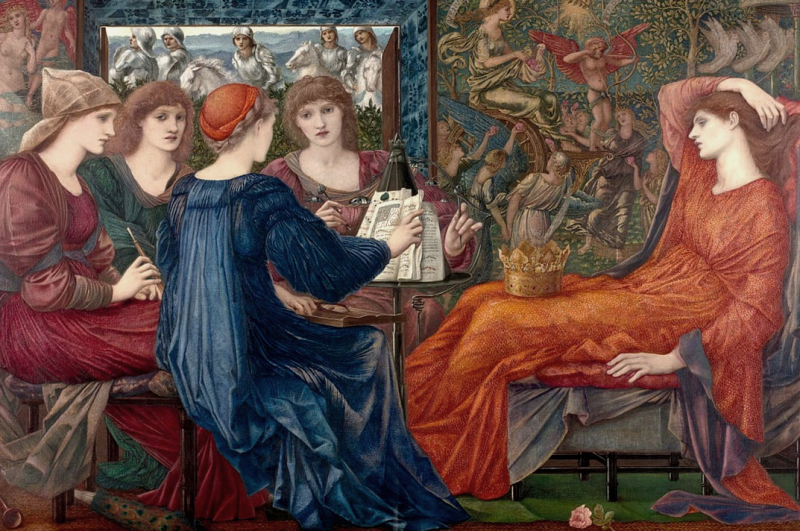 Sometimes after Sunday lunch at The Grange, the children were put into a carriage "and taken to other gardens with studios in them, where our parents would talk and pace the paths, and we would play among rose trees and apple trees and the very sooty creeping ivy peculiar to London gardens. 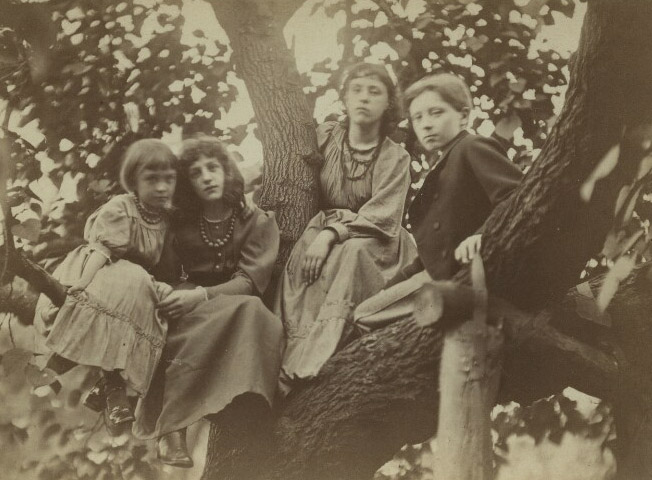 "All through the long afternoons the gardens waited for us. Draycott Lodge, where the Holman Hunts lived; Beavor Lodge and the Richmonds; the Vale, home of the de Morgans -- all bricks and mortar now. Melbury Road, even then only a ghost of its old self where the Princeps used to have their friends in a yet more golden age, and where the Watts still lived. Grove End Road, with Tadema's stories which were so difficult to understand until his own infectious laugh warned you that he had reached the point, the agate window and the brazen stairs. Hampstead, Chelsea, Hammersmith, gardens were waiting for us everywhere and people who made noble pictures and were constant friends." 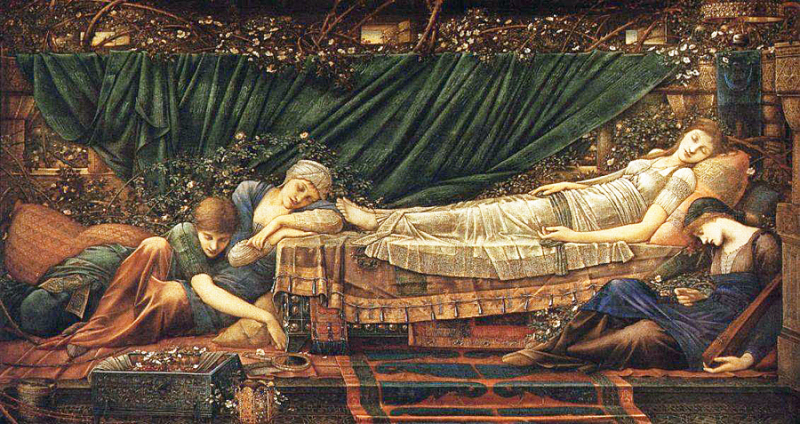 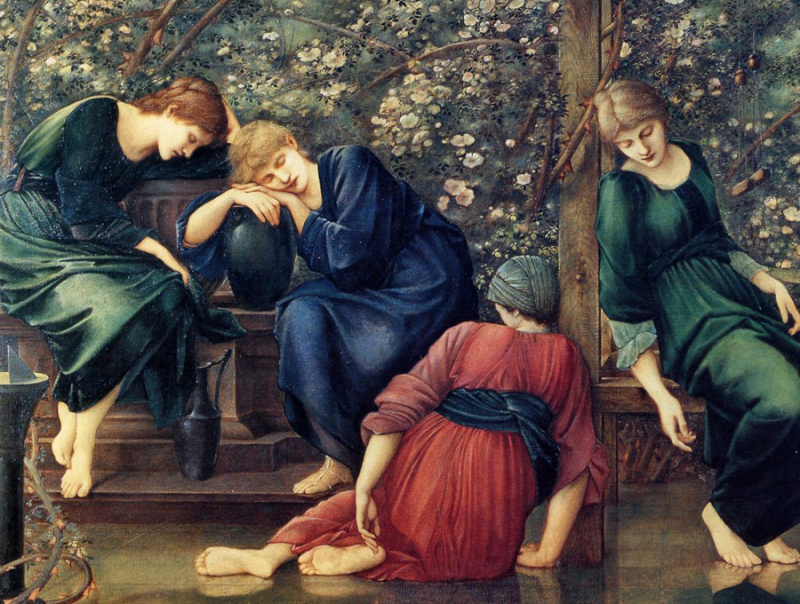 Although the circle of mythic artists here in Devon isn't quite so illustrious as the one Angela grew up in (Burne-Jones and his friends were, by then, among the most celebrated artists of their time), her words make me wonder what younger generations here in Chagford will remember about their myth-rattled, paint-spattered, faery-haunted parents and grandparents. And if any of them will write about it one day.

If they do, I hope they will be kind. 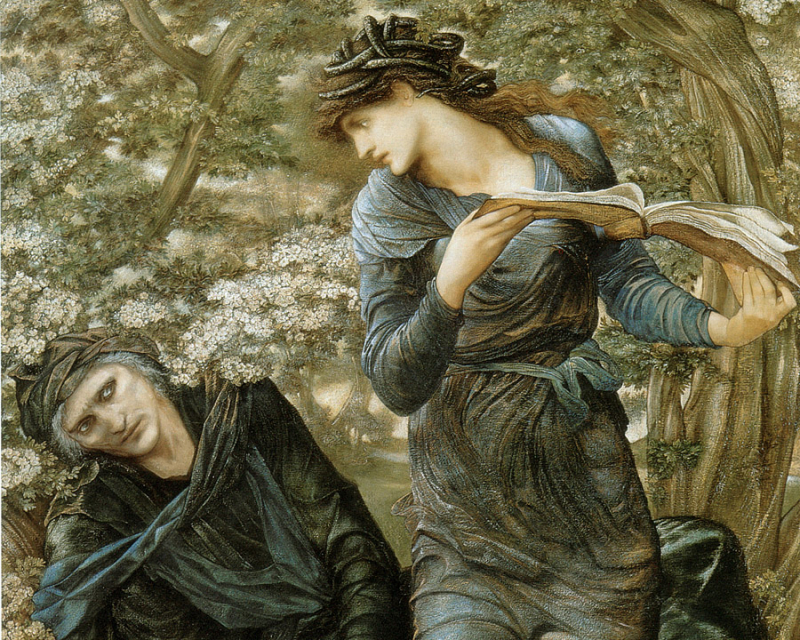 The passage above is from Three Houses by Angela Thirkell (Oxford University Press, 1931); all rights reserved by the author's estate. The paintings and photographs are identified in the picture captions. (Run your cursor over the images to see them.)

Beautiful reflection between your Devon life and those of the Pre-Ralphs to which I can relate as I write odd and different tales my Pacific Island ancestors just out of the crib might find ... odd. I too hope they will be kind in their assessment.

This a wonderful insight on the domestic workings of the Pre-Raphaelites' artistic circle. I love the photo of Burne-Jones' working on 'The Star of Bethlehem'. It's one of my favourites of his work and as it hangs in the Birmingham Art gallery I go over to see it and other Pre-Raphaelite art on a fairly regular basis. Did you know it's actually a huge watercolour/gouache painted on paper? Apparently, Burne-Jones didn't like the smell of oil paint! Bit of a drawback for someone following his career path!

I find these links between our lives and the lives that have gone before us so fascinating. It one of the main reasons I love the Mythic Arts field.

The Birmingham Art gallery's collection is extraordinary, isn't it? It's been too long since I've been up there, though. Perhaps another road trip is in order...

I'm fascinated by the "Birmingham group" of artists and their contribition to the Arts & Crafts movement. I have a post about it in the works -- but I've also got a busy couple of weeks ahead, so I'm not sure when I'll get it done and up.

I love the smell of oil paint -- but I shared my Tuscon studio for years with a sculptor friend, Beckie Kravetz, who was allergic to it, so I used a water-based oil paint there instead. Since I use my oil paints very thinly, almost like they are watercolors (a technique I learned years ago from Tom Canty), I didn't find much difference between the water-based oil paints and the proper oil paints, other than the fact that the latter dried more quickly and so I had to work with them more quickly too.

I've never tried gouache; have you?

I hope your own writing and art is thriving, Stuart.

No, gouache is a total mystery to me. I wonder if the gum base makes it as viscous as it sounds. My medium is acrylic so I find oils equally mysterious and arcane. An artist friend of mine waxes lyrical about the brilliance of oil-based colours, but I can see little difference between them and the acrylic paints I use.

At the moment I'm working hard on both writing and art. All being well I have a mini exhibition coming up in the spring and I'm working flat out in an attempt to get stuff ready for that.

Have you noticed a downturn in the art market in your area? I was at an event in the Midlands in September where I, literally, made an eighth of what I'd made at the same venue the year before. I think Brexit is having an effect, but perhaps things will bounce back soon.

Writing remains variable. I'm wading through a couple of rewrites at the moment. But still, I'm lucky to work in the fields I love, even if the arrival of the gas/electricity bill fills me with dread.

Yes, we've definitely noticed a downturn in the art market. Brexit is already affecting the economy, and people are afraid to spend, not knowing what "fresh hell" (as Dorothy Parker would surely have described Brexit) we'll wake up to tomorrow.