Away with the Birds
Women's March 2018

A parliament of owls 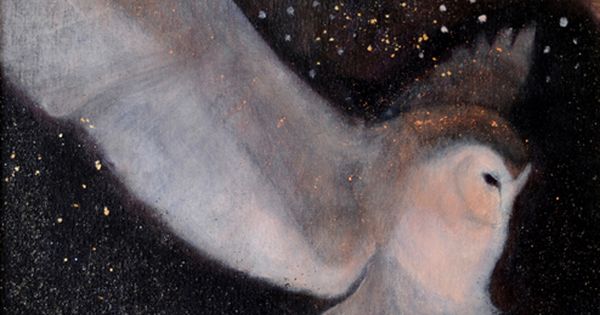 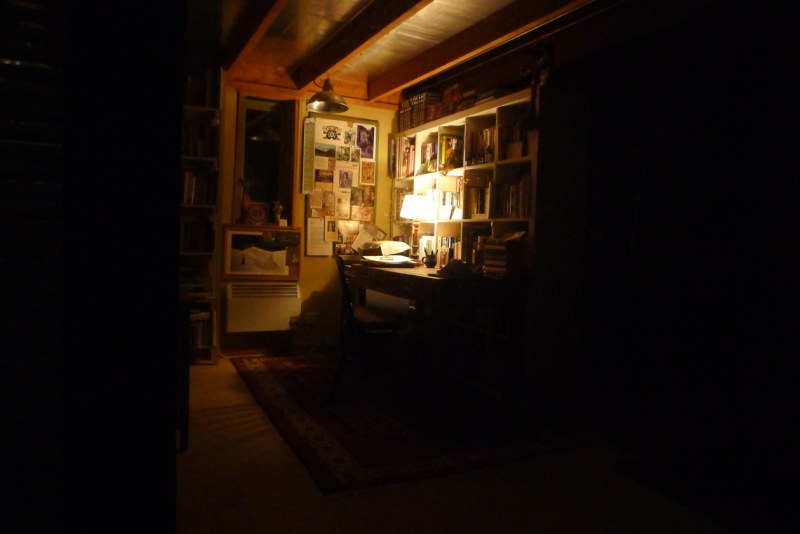 This post was first appeared here a year ago, and is reprinted today by request. It goes out to all who struggle with the short days and long nights of winter....

At this time of year the mornings are dark, so I climb the hill to my studio on a pathway lit by moonlight and stars. I unlock the cabin, light the lamps, and Tilly settles sleepily on the couch. Behind us, the oak and ash of the woods are silhouettes cut out of black paper; below, the village lies in a bowl of darkness, the outline of the moor on its rim. I can hear water in the stream close by, and owls calling from the woodland beyond. The sun rises late, the days are short, and the owls are a regular presence.

In the myths and lore of the West Country, the owl is a messenger from the Underworld, and a symbol of death, initiation, dark wisdom. She is an uncanny bird, a companion to hedgewitches, sorcerers, and the Triple Goddess in her crone aspect. There are owls in the woods all year long, of course, but winter is when I know them best: as I climb through the dark guided by a small torch, and my dog, and the owls' parliament. 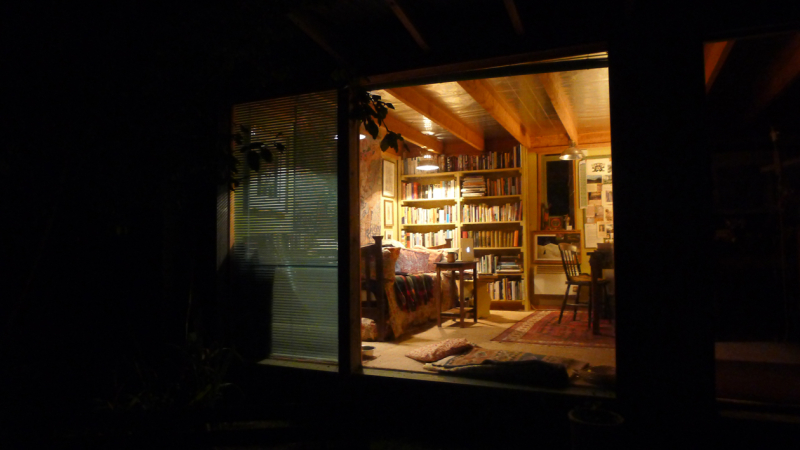 In her essay "Owls," Mary Oliver writes of her search for the birds in the woods near her home -- describing her quest, and the passage from winter to spring, in prose that takes my breath away: 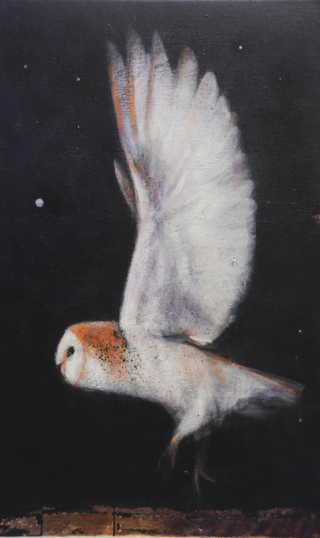 "Finally the earth grows softer, and the buds on the trees swell, and the afternoon becomes a wider room to roam in, as the earth moves back from the south and the light grows stronger. The bluebirds come back, and the robins, and the song sparrows, and great robust flocks of blackbirds, and in the fields blackberry hoops put on a soft plum color, a restitution; the ice on the ponds begins to thunder, and between the slices is seen the strokes of its breaking up, a stutter of dark lightning. And then the winter is over, and again I have not found the great horned owl's nest.

"But the owls themselves are not hard to find, silent and on the wing, with their ear tufts flat against their heads as they fly and their huge wings alternately gliding and flapping as they maneuver through the trees. Athena's owl of wisdom and Merlin's companion, Archimedes, were screech owls surely, not this bird with the glassy gaze, restless on the bough, nothing but blood on its mind.

"When the great horned is in the trees its razor-tipped toes rasp the limb, flakes of bark fall through the air and land on my shoulders while I look up at it and listen to the heavy, crisp, breathy snapping of its hooked beak. The screech owl I can imagine on my wrist, also the delicate saw-whet that flies like a big soft moth down by Great Pond. And I can imagine sitting quietly before that luminous wanderer the snowy owl, and learning, from the white gleam of its feathers, something about the Arctic. But the great horned I can't imagine in any such proximity -- if one of those should touch me, it would be the center of my life, and I must fall. They are the pure wild hunters of our world. They are swift and merciless upon the backs of rabbits, mice, voles, snakes, even skunks, even cats sitting in dusky yards, thinking peaceful thoughts. I have found the headless bodies of rabbits and bluejays, and known it was the great horned owl that did them in, taking the head only, for the owl has an insatiable craving for the taste of brains. I have walked with prudent caution down paths at twilight when the dogs were puppies. I know this bird. If it could, it would eat the whole world.

"In the night," writes Oliver, "when the owl is less than exquisitely swift and perfect, the scream of the rabbit is terrible. But the scream of the owl, which is not of pain and hopelessness, and the fear of being plucked out of the world, but of the sheer rollicking glory of the death-bringer, is more terrible still. When I hear it resounding through the woods, and then the five black pellets of its song dropping like stones into the air, I know I am standing at the edge of the mystery, in which terror is naturally and abundantly part of life, part of even the most becalmed, intelligent, sunny life -- as, for example, my own. The world where the owl is endlessly hungry and endlessly on the hunt is the world in which I too live. There is only one world." 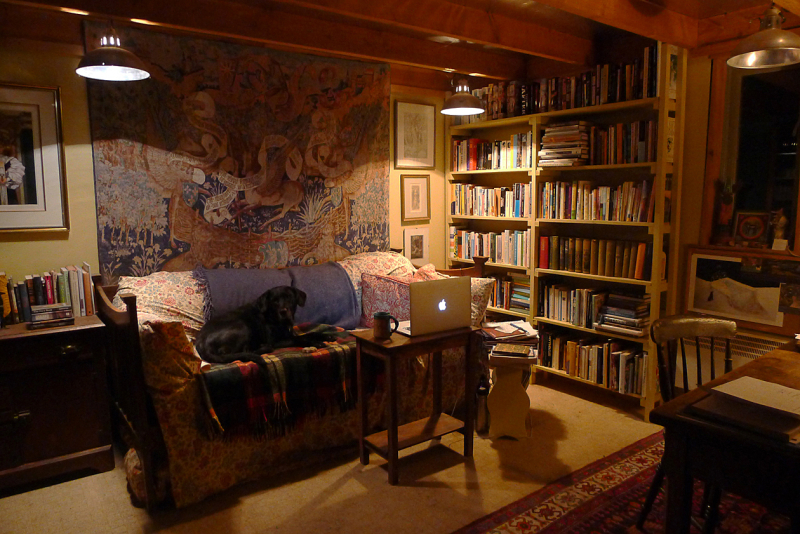 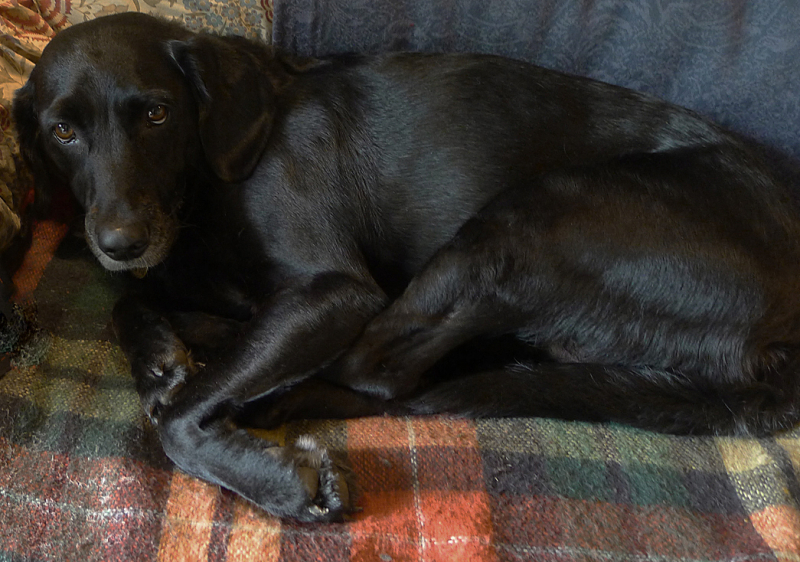 Like Oliver, I strive to create and inhabit a "becalmed, intelligent, sunny" life -- fashioned from ink and paint, old storybooks, and rambles through the hills with the hound -- but darkness, mortality, and mystery are the flip side of that coin. I remember this during the winter months, on the dark path up to my studio. I remember it when my body fails and death glides by on a horned owl's wings; it does not come to my wrist, not yet, thank god, but some day it must, and it will. I remember it when the dark daily news intrudes on my studio solitude, demanding response, outrage, activism. I resist the dark. My life has known too much dark and I want no more of it. I'm a creature of dawn...but the nightworld is our world too. There is only one world.

"Most people are afraid of the dark," writes Rebecca Solnit (in a beautiful essay on Virginia Woof). "Literally, when it comes to children; while many adults fear, above all, the darkness that is the unknown, the unseeable, the obscure. And yet the night in which distinctions and definitions cannot be readily made is the same night in which love is made, in which things merge, change, become enchanted, aroused, impregnated, possessed, released, renewed. 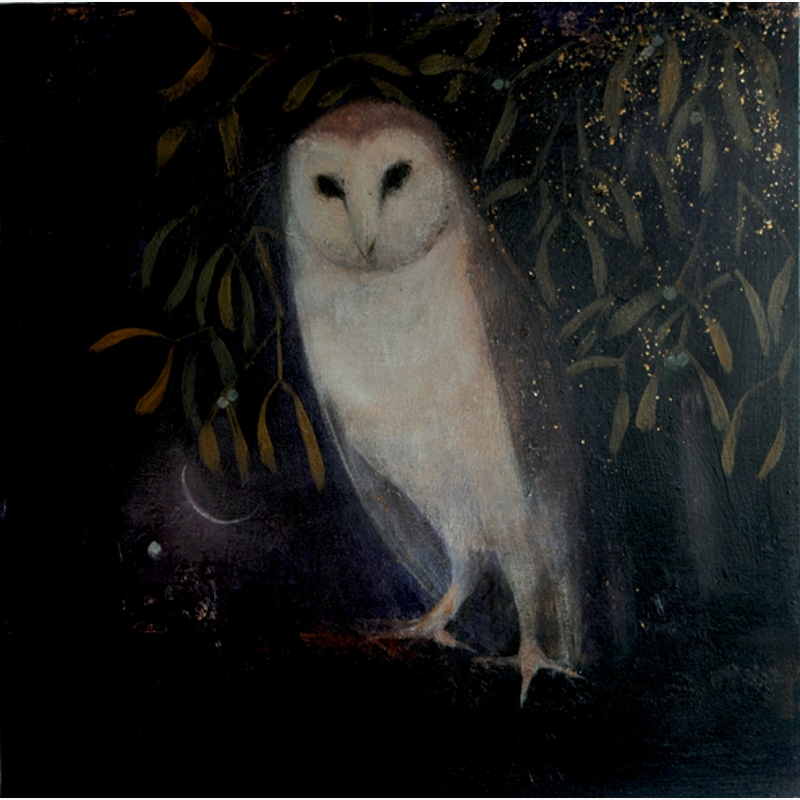 "As I began writing this essay," Solnit continues, "I picked up a book on wilderness survival by Laurence Gonzalez and found in it this telling sentence: 'The plan, a memory of the future, tries on reality to see if it fits.' His point is that when the two seem incompatible we often hang onto the plan, ignore the warnings reality offers us, and so plunge into trouble. Afraid of the darkness of the unknown, the spaces in which we see only dimly, we often choose the darkness of closed eyes, of obliviousness. Gonzalez adds, 'Researchers point out that people tend to take any information as confirmation of their mental models. We are by nature optimists, if optimism means that we believe we see the world as it is. And under the influence of a plan, it’s easy to see what we want to see. It’s the job of writers and explorers to see more, to travel light when it comes to preconception, to go into the dark with their eyes open.' "

That is indeed our job. So I climb through the dark, and open myself to its beauty, its terrors. And I sit down to write. 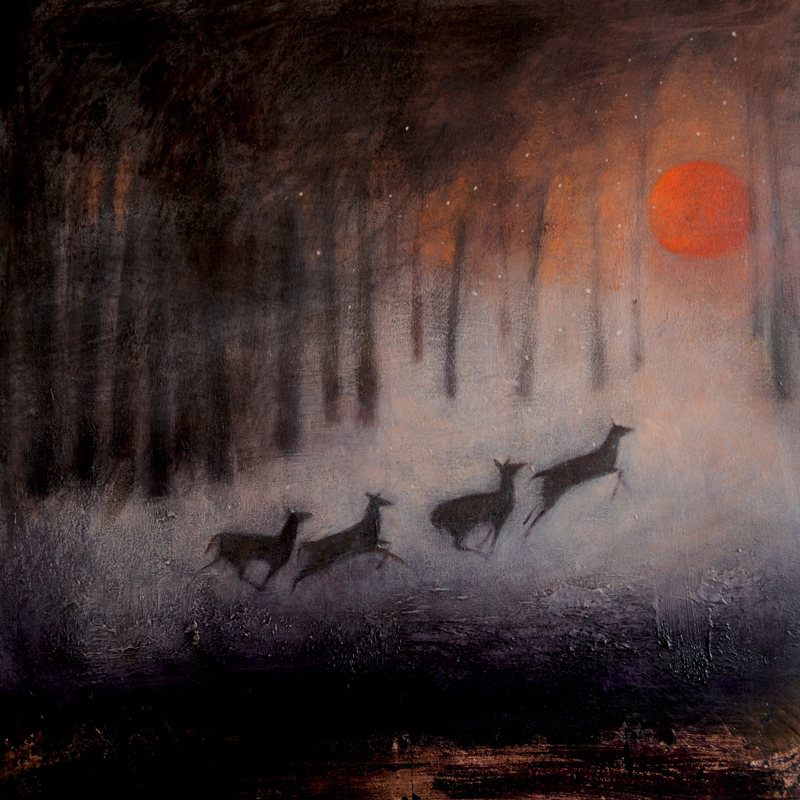 The art today is by Catherine Hyde, an extraordinary painter based in Cornwall. Catherine trained at Central School of Art in London, and has been exhibiting her work in galleries in London, Cornwall, and father afield for over thirty years. In 2008 she was asked to interpret Poet Laureate Carol Ann Duffy’s fairytale The Princess’ Blankets, which won the English Association’s Best Illustrated Book for Key Stage 2 in 2009. Her second book, Firebird written by Saviour Pirotta,  was awarded an Aesop Accolade by the American Folklore Society in 2010. Her third book, Little Evie in the Wild Wood written by Jackie Morris, is a twist on the Red Riding Hood fairy tale. She both wrote and illustrated The Star Tree, which has been nominated for the 2017 Kate Greenaway Award and shortlisted for the 2017 Cambridgeshire Children’s Picture Book Award. I recommend all four books highly.

Regarding her work process, she says: "I am constantly exploring the places between definable moments: the meeting points between land and water, earth and sky, dusk and dawn in order to capture the landscape in a state of suspension drawing the viewer to the liminal spaces that lie between dream and consciousness.” 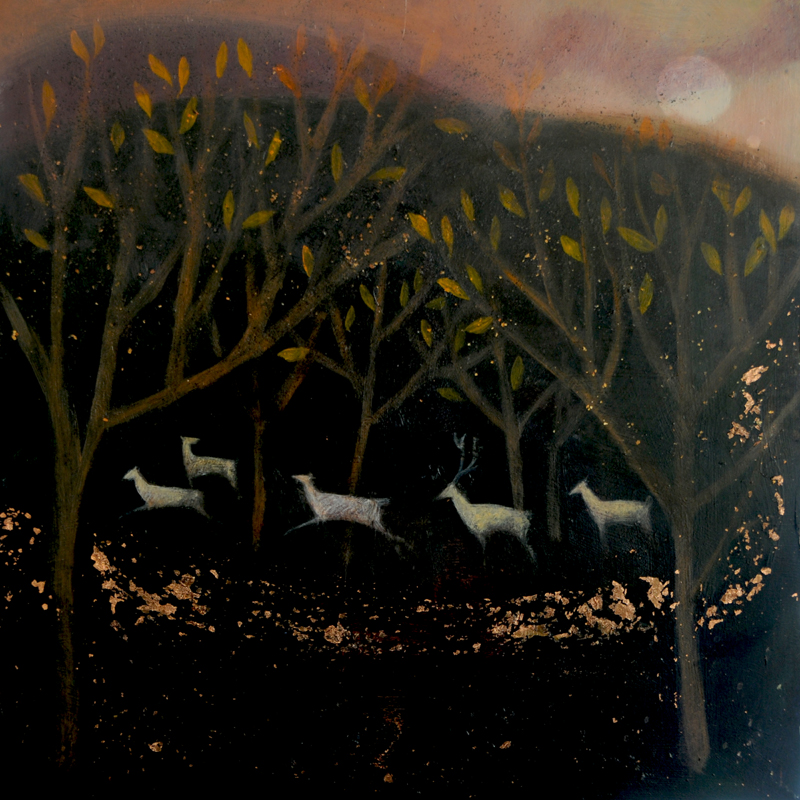 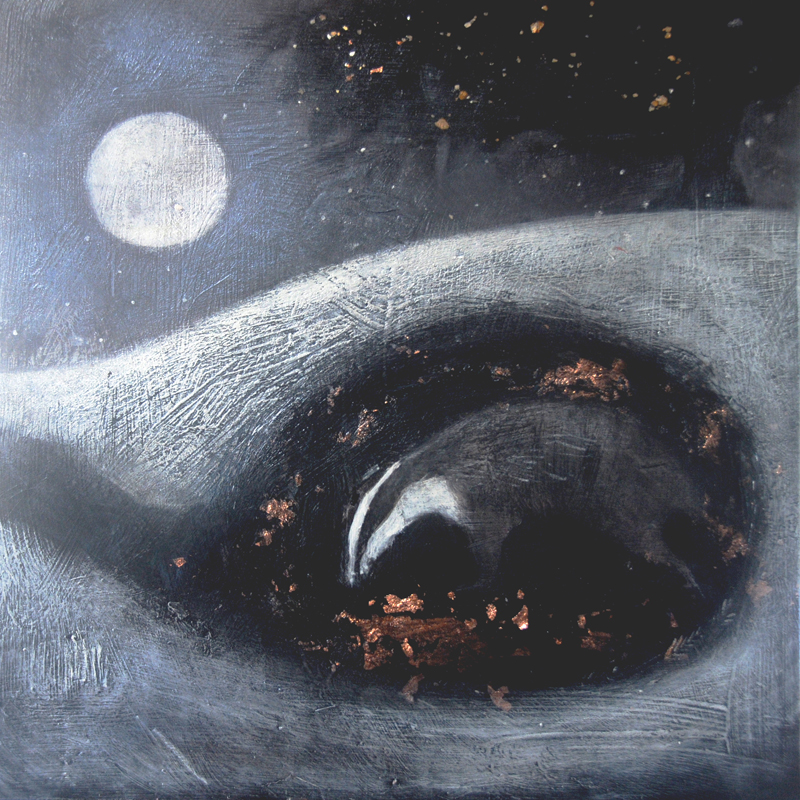 The passage by Mary Oliver is from "Owls" (Orion Magazine, 1996). The passage by Rebecca Solnit is from "Virginia Woolf’s Darkness: Embracing the Inexplicable"  (The New Yorker, 2014). The poem in the picture captions is from New & Selected Poems by Mary Oliver (Beacon Press, 1992). All right reserved by the authors. The paintings by Catherine Hyde are: a detail from The Falling Sar, The Wild Night Ascending, The Soft Hush of Night, The Running of the Deer, The Golden Path, and The Sleeping Earth. All rights reserved by the artist.

in Birds, From the archives, Illness & healing, Night | Permalink | Comments (5)

We are a birding family, especially owls. My book, OWL MOON, is about a father (my late husband) taking his child (our daughter Heidi, herself now a leader of owl watching trips) on a winter night exploration in the woods. So this post was extremely meaningful AND comforting to me.

Owl Moon is one of my favorite books in the world.

Nice, Jane. I will go to the library and find OWL MOON. When I find it, I will think of you and your family.

I think you've brought me a new awareness, reading all these wonderful words, sliding through these images poetic. I think often of moving away from our dualistic ways of thinking, black-white, right-wrong, light-dark. Now I'm lingering on the cusp, feeling the depth of how our poor words try to take me to the dark, the emotional, intuitive places, where my own senses are tuned differently. This I will continue to explore, hand-holding between my adult and child selves. I've re-read this post already, and will do so again. Mmmm.

I have Catherine's calendar for this year - oh, such dark beauty!