Little gods of the field
A parliament of owls

Away with the Birds

Two years ago, in a Monday Tunes post, I recommended Away With the Birds by Hanna Tuulikki. This week, while we're on the subject of birds, I'd like to look closer at this powerful, unusual composition and performance project. Tuulikki, of English and Finnish heritage, studied environmental art at The Glasgow School of Art and is now based in Edinburgh, where she creates interdisciplinary works deeply rooted in myth, folk history, and the natural world.

In an interview by Sharon Blackie, Tuulikki explains:

"Away With the Birds/ Air falbh leis na h-eòin is a multi-artform project exploring the mimesis of birds in Scottish Gaelic song poetry, and at its heart is a vocal composition written for a ten-person female vocal ensemble. The score reinterprets archive recordings, texts, and living traditions, weaving together fragments of songs and poems that are imitative of birdsong into a textural tapestry of sound. Over five movements, the music journeys through communities of waders, seabirds, wildfowl and corvids, evoking sea, shoreline, cliffs, moor and woodland habitats. Within the composition, there is never a soloist -- rather, each vocal part contributes to the whole. The ensemble sing the sea, the winds, and the motion of birds -- wading on the shoreline, swooping before cliffs, and beating skeins, calling to mind the ecotones were species meet.

"Two years ago, on the Isle of Canna, in the Hebrides, we performed the composition within the harbour -- along the shoreline, in the water, and on a skein-shaped platform -- with speakers set up, to amplify and drift the voices across the water to the audience, mingling and interacting with the sounds of the island. As the music ebbed and flowed, my intention was to create a space for listening and for becoming present, for tuning into a sonic continuum that reaches into the 'more-than-human' world. 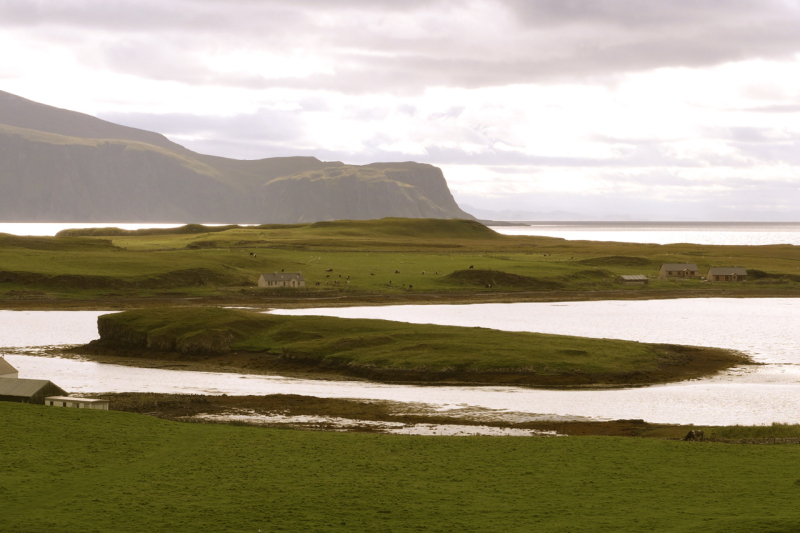 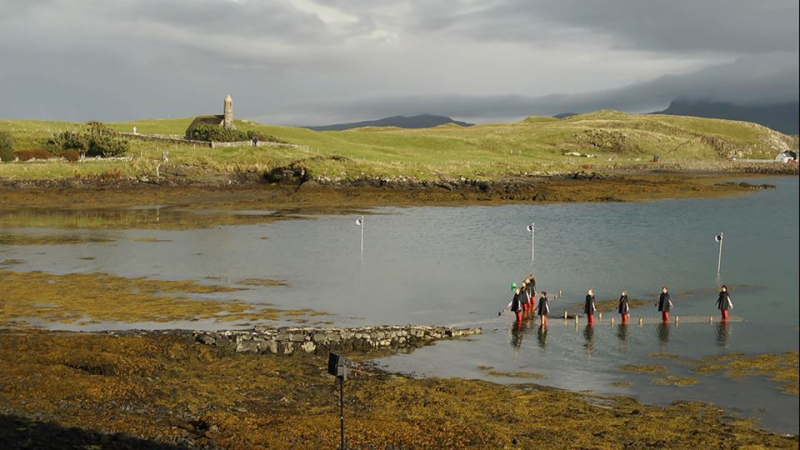 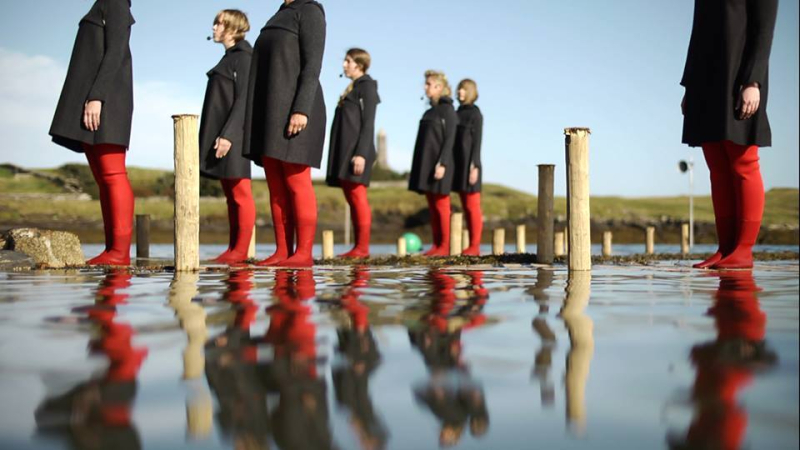 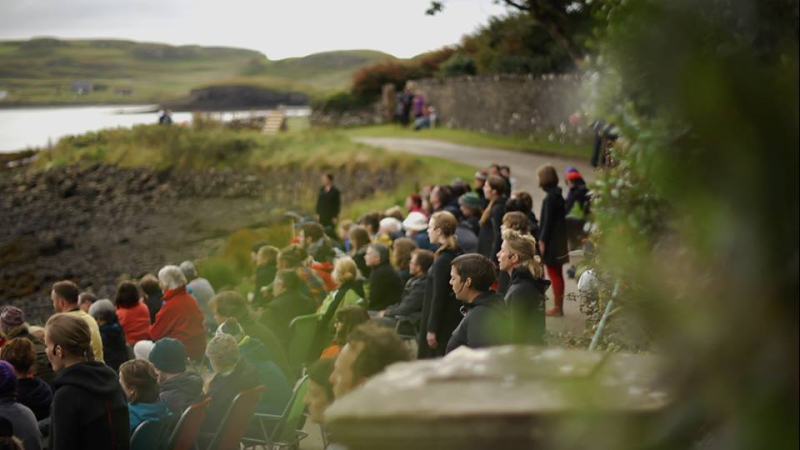 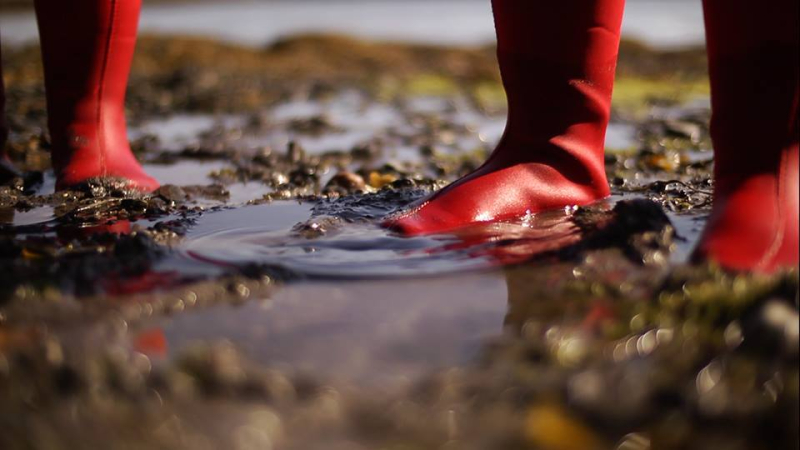 "The idea for the work emerged from my interest in music from around the world, and noticing that in cultures where people have intimate connection with the land, they are also good mimics of the sounds around them -- their music seems to grow directly out of the sounds of the environment....

"Ethnomusicologist Ted Levin describes this tradition as 'sound mimesis' -- the use of sound to represent and interact with the natural environment and the living creatures that inhabit it, and more broadly the exploration of 'representational and narrative dimensions of sound-making.' He describes a spectrum of sound mimesis ranging from 'sound' to 'song,' from iconic imitation to stylized evocation, and symbolic metaphor or representation. It's my belief that our music, and perhaps even our language, have their origins in 'sound mimesis,' evolving from our listening to the sounds of the animate landscape. And so I began to seek out a musical tradition like this, closer to home.

"I decided to focus particularly on birds because of my childhood interest in them, but mostly because I am deeply affected by their sounds! The complex musical patterns of songbirds never fail to impress, the haunting calls of the waders across the water move me, and the chattering vocalizations of certain seabirds make me laugh! I listen in awe at this more-than-human music." 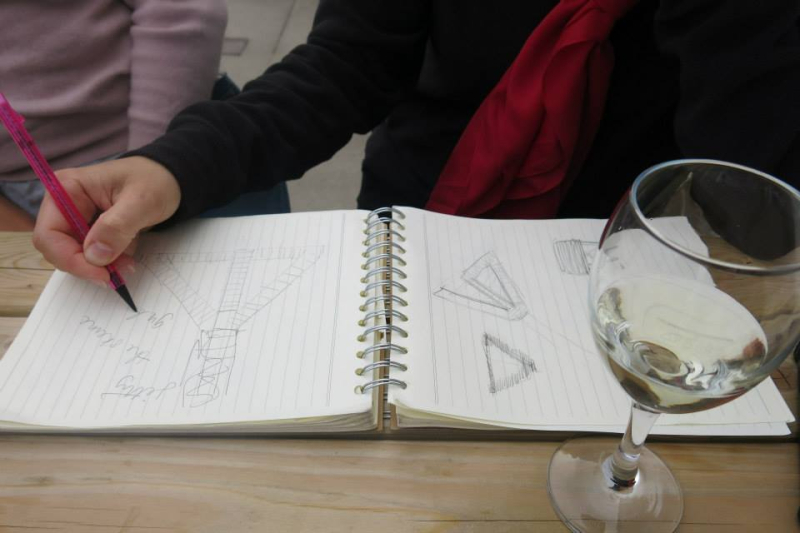 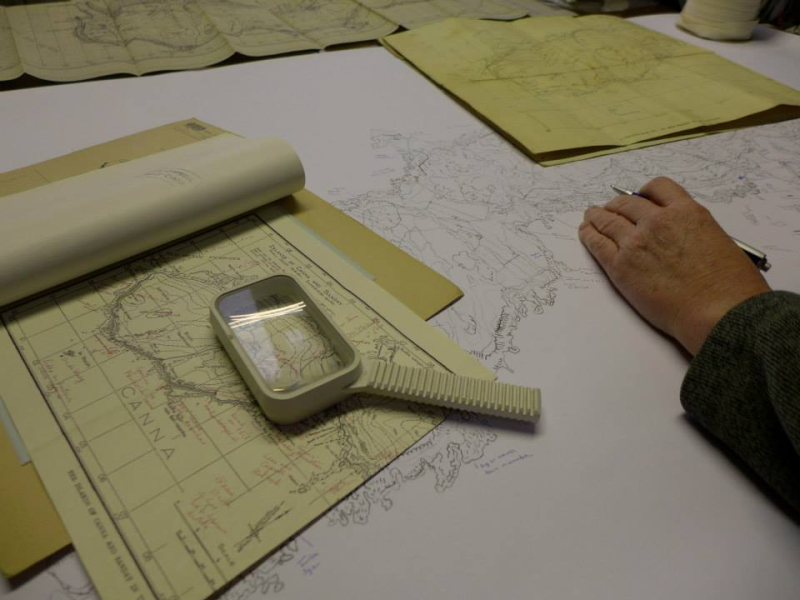 "When I began to investigate traditions in the English-speaking world, I found only two songs imitative of actual bird sounds -- 'The Cuckoo' and 'The Blackbird,' which are actually of Irish and Manx origin. There are plenty of songs about birds -- for example, 'The Birds in the Spring' or 'Polly Vaughn' -- but it appears that the only symbolic and representational aspect of mimesis remains here.

"As my search continued, I discovered a wellspring of Scottish Gaelic tradition, preserved mainly in the Western Isles, which seems to reach deeper into mimesis, perhaps because people's intimacy with the land was maintained for longer. The songs and poem imitate the sounds and evoke the movements of various species of birds -- mainly waterbirds -- which is indicative of the Western Isles landscape. There are songs of seabirds that nest on cliffs -- kittiwakes, guillemots, Manx shearwaters, Leach's storm petrels; waders such as oystercatchers and redshanks; wildfowl such as whooper swans and geese; and poems of corvids and cuckoo. The bird-sounds ghost through the melody of the songs, expressed in the words, vocables (non-lexical sounds) and rhythms and, collected together, reveal a spectrum of mimesis: some are directly imitative and others are more stylized. I think Gaelic lends itself to the mimesis of birds, because I believe the language has evolved through a close relationship with the land and its community of sounds. 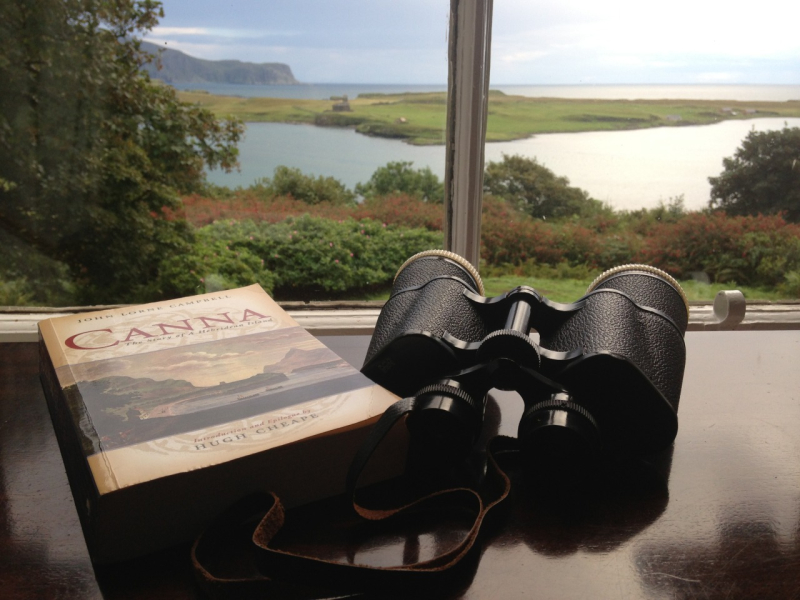 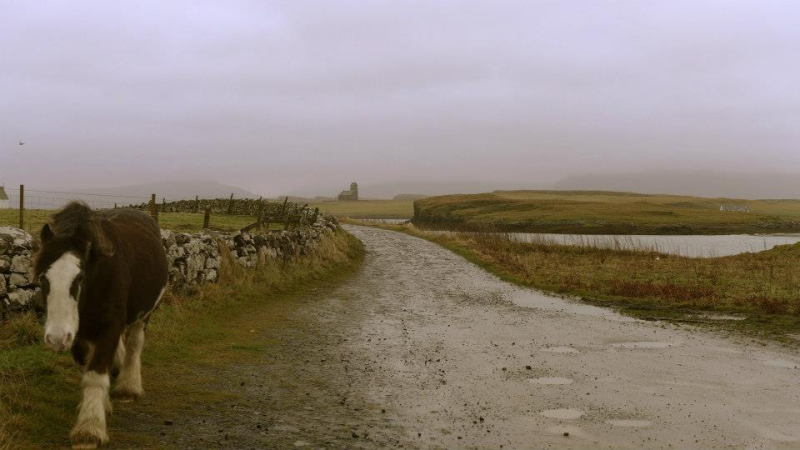 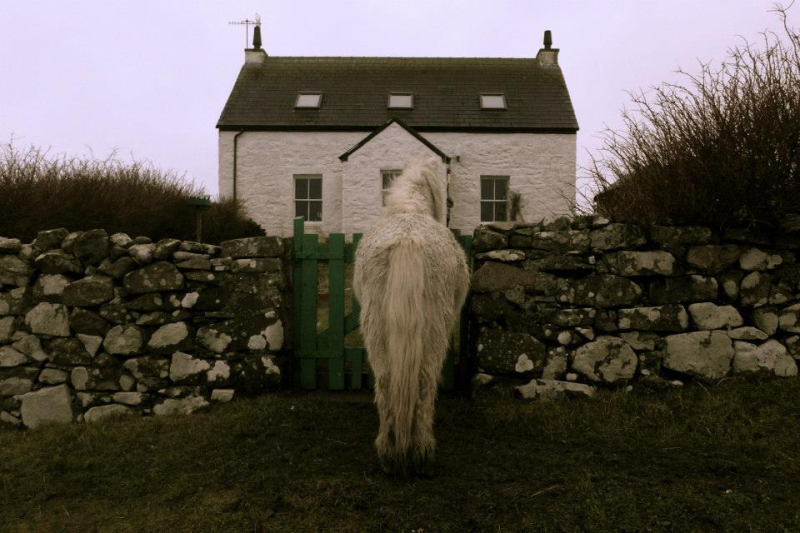 "As well as imitating the birds, the songs carry symbolic and cultural meaning. One thing that I love about them, and it came as a surprise to me when I realized it, is that they are nearly all matrilineal -- either sung by women, from a woman's perspective, or about women. From work to leisure, birth to death, the songs have a social function rooted in women's activities and domains -- songs about the men out hunting the seabirds on the cliffs, and waulking songs about love; to magico-religious songs such as those about the redshank, a keening song to sing the departed safely over to the spirit world, and the oystercatcher, who does St. Bride's work of caring for children. As much as this project is about birds, and ancient traditional culture, it is also about women and, in the same way that Gaelic culture preserved sound mimesis, I often wonder about the significance of how women's songs appear to have also preserved those older traditions.

"These two aspects, the ecological mimesis and the matrilineal, became the conceptual and compositional framework for the piece, from the macro to the micro, from the wider shape of the project, to minute details. It is no coincidence that the piece is called Away With the Birds, with its double meaning! Contained within this musical portrait of the inter-relationship between bird and human is the recognition of a lineage 'outside' the written word, that stretches back to early hunter-gatherer cultures, for whom bird-calls and animal cries had magico-religious symbolism -- like the slay-toed fowlers who scaled the cliffs of St. Kilda, and the women who bore the song-poems." 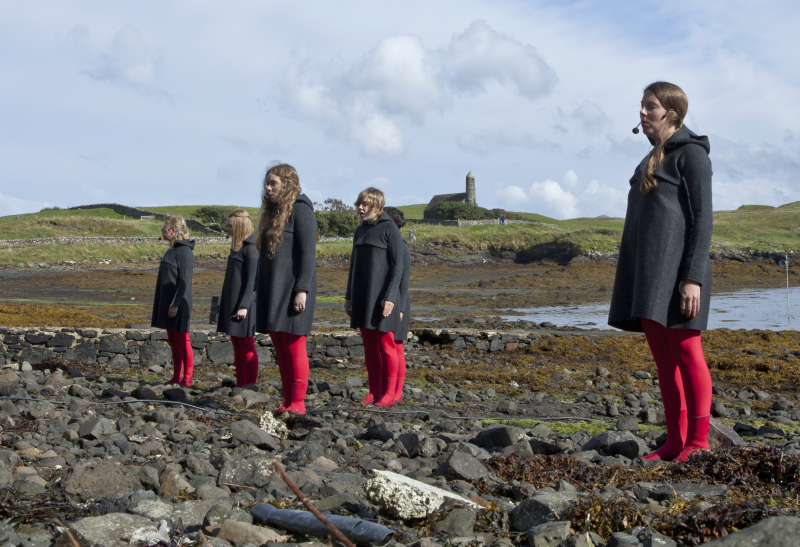 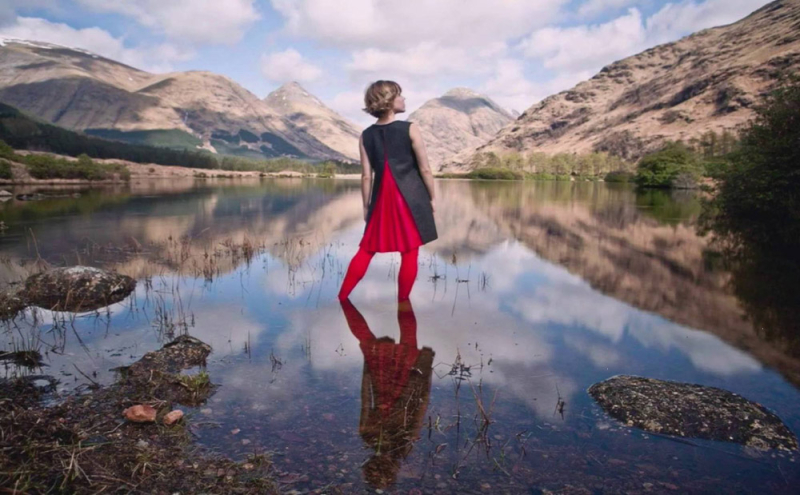 To read Sharon Blackie's interview with Tuulikki in full, seek out the March 2017 issue of EarthLines Magazine. The magazine has stopped publication, but backlist issues are still available and I highly recommend them.

Related posts: When Stories Take Flight (myths & folklore of birds) and The Speech of Animals.

I kept waiting to see/hear if a bird reacted.

I adore the red bird thing though can't figure out how to send it to my FaceBook page.

Jane,
If you listen to the whole video and let the other related vids come up, you ought to see a SHARE link in the upper right-hand corner. Copy and paste it to your FB page. Hope this helps. Mokihana

As a life-long bird lover - my father first took me birding as a toddler - I've been loving every single one of these bird posts over the last couple of weeks, Terri. But as a musician living by the sea in the Canadian Maritimes I am especially agog, enchanted and inspired by Away With the Birds. How I wish I could have seen the performance! I will explore the website offerings and Ms. Tuulikki's other work. Thank you SO much for this introduction to it.