A parliament of owls
Tunes for a Monday Morning 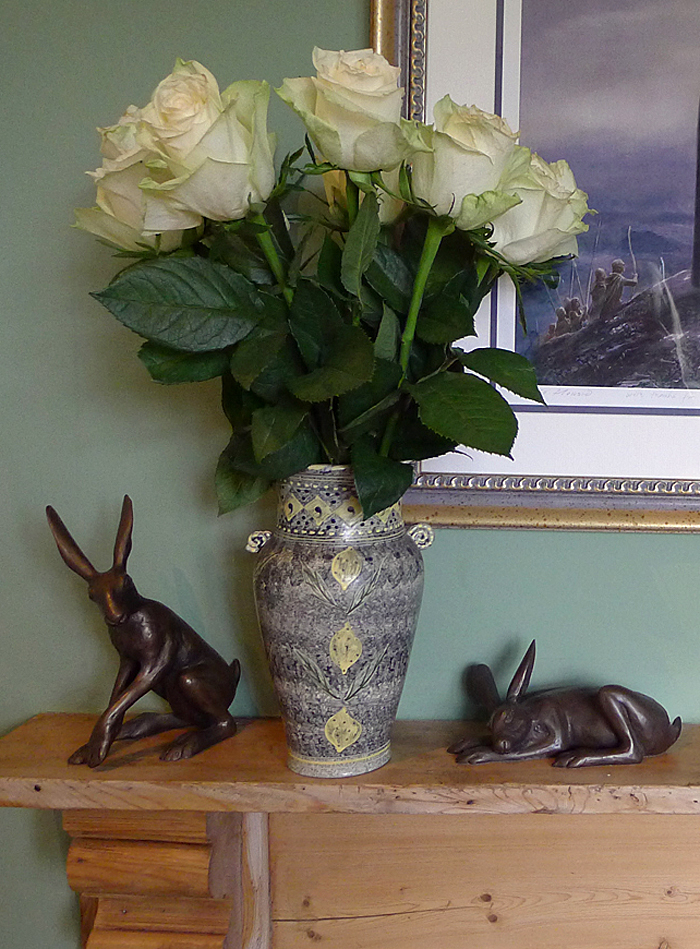 Sending love, solidarity, and flowers (in suffragette white) to everyone who is participating in the Women's March in the United States (today), the United Kingdom (tomorrow), or wherever else in the world you are gathering. I'm grateful for you all.

In 1922, writer & activist Winifred Holtby wrote in a letter to The Yorkshire Post:

"I am a feminist because I dislike everything that feminism implies. I desire an end to the whole business, the demands for equality, the suggestion of sex warfare, the very name feminist. I want to be about the work in which my real interests lie, the writing of novels and so forth. But while the inequality exists, while injustice is done and opportunity denied to the great majority of women, I shall have to be a feminist. And I shan't be happy till I get ... a society in which there is no respect of persons, either male or female, but a supreme regard for the importance of the human being. And when that dream is a reality, I will say farewell to feminism, as to any disbanded but victorious army, with honour for its heroes, gratitude for its sacrifice, and profound relief that the hour for its necessity has passed."

Like Holtby, I would prefer to focus on "the writing novels and so forth," but the work of social change is far from done. I am proud to call myself a feminist, today and every day. 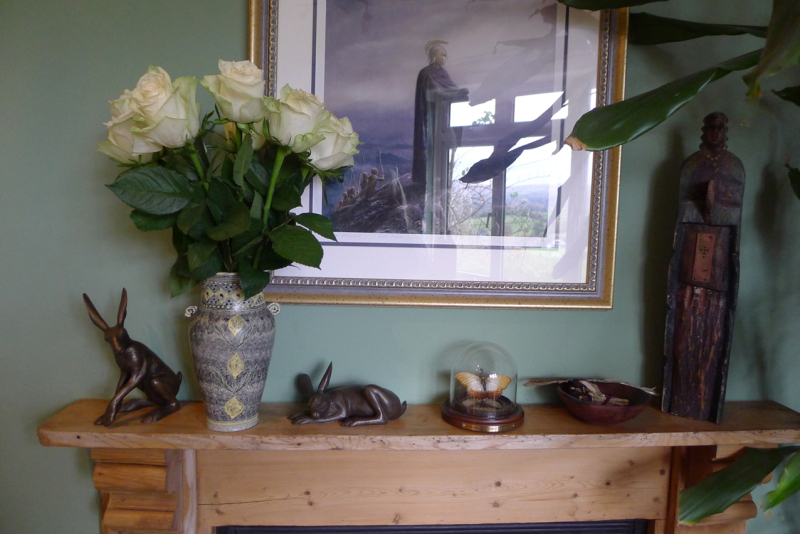 The white roses were given to me by my British mother-in-law on the day of the American election in 2016. She knew how much it meant to me to vote for a woman candidate, and how devastated by the outcome I was. The picture on the wall is by our friend and neighbor Alan Lee: the cover image for JRR Tolkien's posthumous book The Children of Húrin. Howard posed for the central character in the picture some years ago, and we treasure it.

It's been a long long battle for what is good and true and this is a lovely post Terri. Onward...

To that happy day when no negative and no campaigning 'ism' of any sort exists, both because we have grown as a people and reject such horrors as racism and also because our society is finally so well balanced there's no longer a need for such movements as feminism.

We came early because we had to,
because the sky was slate,
because parking would become a problem,
because some patriarch-in-the-making
had a bullhorn until a woman,
twice his size took it from him,
the way a mother extricates a drum
from the hands of an unruly child.

We came early but not early enough,
because we had to park blocks away,
extending the march by a quarter mile,
abandned it in a lot that warned
not to park, which we ignored,
and found friends and made friends
until the march actually began.

We came late but not too late,
because the sun shone wanly
as if doing us a favor,
but at the end of the line,
which was the complaint section
and that exactly fitted our mood,
so we shouted, waved signs,
felt comforted by the nearness
of neighbors just like us.

We left early because the puddles
of melting snow made walking hard,
not waiting to hear all the speeches,
and the songs, but having read
over a thousand signs, and shouting
till we were hoarse with history
and the thought that we showed
the children amongst us that protest
was community and moment

which in the end would not be denied.

Yes, and we sang as we gathered, and greeted each other because we were neighbors. Thanks Jane for your poetry of the day. I stood behind a sign that said "Feminist is my favorite 'F' word" in bright Pussy Pink. There weren't as many Pussy Hats this year, but people were asking where they could get one. HA!

Thanks, Barb--my pussy hat shaded into purple as befit my age!

Such a marvelous poem that shows the need, the challenge and determination of this march. I like the way you interject the weather not only as part of the real scene but also as a metaphoric element in the progression of this event.
Despite the fact that the "sky was slate", a hardness that reflected an immovable horizon, a threat of storm there is also the idea of something that will be newly written, something to be remembered. And yes, "the sun shone wanly" but it gave glints of hope, affirmation. And those last lines are so inspiring --
We left early because the puddles
of melting snow made walking hard,
not waiting to hear all the speeches,
and the songs, but having read
over a thousand signs, and shouting
till we were hoarse with history
and the thought that we showed
the children amongst us that protest
was community and moment

which in the end would not be denied.

Yes, it showed empowerment, the strength of unity among those committed to
a cause. Thank you for this, it is very moving!

My thanks, Wendy--and yes "slate" was meant to double itself for color and for the image of what can still be written. You are always a deep critic and for that I treasure your thoughts.

It was a moving place to be. Though at times we hardly moved!