Wild Neighbors
The sea of stories Today's theme is highwaymen (and their bold female counterparts) in British balladry. It's a subject of particular interest to me, for I've recently learned that I'm very, very distantly related to one John Clavell (1601-1643), known in his day as the "poetical highwayman" -- a robber, a rogue, and the author of "A Recantation of an Ill Led Life." *  These songs of scofflaws and ne'er-do-wells are dedicated to Ellen Kushner and the writing team of the Tremontaine series. If you're following these fabulous stories online, or have read the new anthology, Tremontaine, then you'll know why.

Above: "Shoot Them All" by Pilgrims' Way, whose new album, Stand & Deliver, is entirely devoted to highwaymen and brigands. "Shoot Them All" is their exuberant rendition of a traditional song known variously as "The Undaunted Female," "The Staffordshire Maid," and "The Serving Girl and the Robber."

Below, a really lovely version of "The Newry Highwayman" by Kim Lowings and The Greenwood, from their new album, Wild & Wicked Youth. The song is also known as "The Flash Lad," "The Rambling Blade," and "Adieu, Adieu."

Above: "Alan Tyne of Harrow" by James Fagan & Nancy Kerr. The exact history of this 18th century broadside ballad is a contested one, but it's probably a variant of an older Irish song, "Valentine O'Hara."

Below: "Turpin Hero" by Jake Bugg (audio only). This too is an 18th century ballad, but based on a known historical character. As A.L. Lloyd explains: "Dick Turpin, an East End butcher’s boy, commenced his wild career by stealing cattle in West Ham and selling the beef, door to door. Pursued by the law, he took to housebreaking and highway robbery. Things became hot, he retired, got into a squabble over a gamecock, was arrested, unmasked, and hanged on April 6, 1739."

Above: "Sylvie," a song also known as "Sovay" and "The Female Highwayman." Collected in Oxfordshire in 1911 by Cecil Sharp (but certainly much older), it was popularized during the '60s folk revival by a beautiful rendition from Pentangle. The version above was recorded for a forthcoming album of ballads by Rachel McShane, with her band The Cartographers. She stitched the song together, she says, "from lyrics found in dusty old books and websites and wrote a new melody and arrangement."

Below: "The Highwayman," written by Alfred Noyes in 1906, with new music composed by Canadian harpist and music scholar Loreena McKennitt (audio only). It's from her gorgeous sixth album, The Book of Secrets (1997).

Some other good songs about highwaymen: "Salisbury Plain" (Maddy Prior does a good version on Lionhearts, and Lisa Knapp on Wild and Undaunted); "Jack Hall" (Sam Carter sings this one on Live at Union Chapel); and Adam Ant's cheeky "Stand and Deliver" (from the New Romantic era of '80s rock).

The art in this post is from a children's book version of "The Highwayman" by Alfred Noyes, illustrated by Charles Mikolaycak (1937-1993). 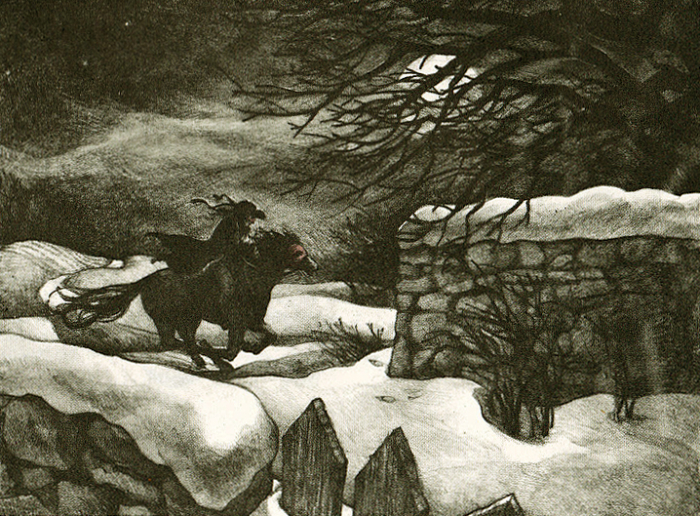 *Although it's not known where the Clavell family originated (some say the Celtic region of Spain), John Clavell's branch setttled in Dorset, England, while mine lived in the French Alps, near Grenoble, before fleeing to Switzerland and the Netherlands during the Reformation. My many-times-great-grandfather, George Craft Clavel, sailed on a Dutch ship to Philadelphia as child in 1737, where he was sold to a button factory owner to help pay for the family's passage. He paid off the bond after five year's work, rejoined his family, and became a farmer and Indian trader on what was then the remote Pennsylvania frontier.

As Danielle Barlow just reminded me, there's also a lovely edition of Noyes' "The Highwayman" illustrated by Charles Keeping.

Thank you, Terri, for including Loreena McKennitt's The Highwayman. I knew you would, though! :)

She's extraordinary. I admire her work so much.

I have long loved the Mikolaycak HIGHWAYMAN, Chuck was a dear friend, I often stayed at the apartment in NY where he and his wonderful wife Carol lived. Their guest bed was a mattress on top of his flat files! So I literally slept on his art. We did two picture books together TAM LIN and LULLABY SONG BOOK. he did a cover of one of my novels. He died way too young. I miss him still. There were so many more books we wanted to do together, so much more art in him. He breathed it like air. Thanks for showcasing some of his art, Terri.

Oh, excuse me! Excuse me? You left out THIS!

Proving once and for all that he really does have twelve fingers, six on each hand. Whosh!

He played at Smith once and David and I went, bagging two seats in the second row, close enough for spit to sparkle on our collars,and we just rose up in our seats at each after each piece he played. And when he sang Vincent the crowd went wild. And all be-dewed, so did we!

Have you ever read "The Middle Window" by Elizabeth Goudge? This one gives me the chills.

Awesome, my next story is involves Highwaymen (and women). Its a time-travel romance but modeled after the Greek myth of Persephone, mixed with picaresque adventures, Jungian and Freudian themes.

Linda Ronstadt and EmmyLou Harris did this version of "Loving the Highway Man" on their c.d. The Western Wall. It has haunted me. https://www.youtube.com/watch?v=cZnFUiJmeX0

You're related to a Poetical Highwayman...?????

When I pick my jaw up off the floor, I'll have a listen to this music - which looks entirely wonderful.

Maybe it's because I've been binge watching Outlander lately, but I've been thinking about Highwaymen a lot. I think if I had to choose a single CD to take with me to a desert island, it might be Book of Secrets. Here's another song on the Highwayman theme that speaks to me as well:

Then there's Roberta Rogow's whole album "Heroes and Villains (& Some In Between​.​.​.​.​)", here: https://robertarogow.bandcamp.com/