It begins with noticing
Sentences & Mermaids 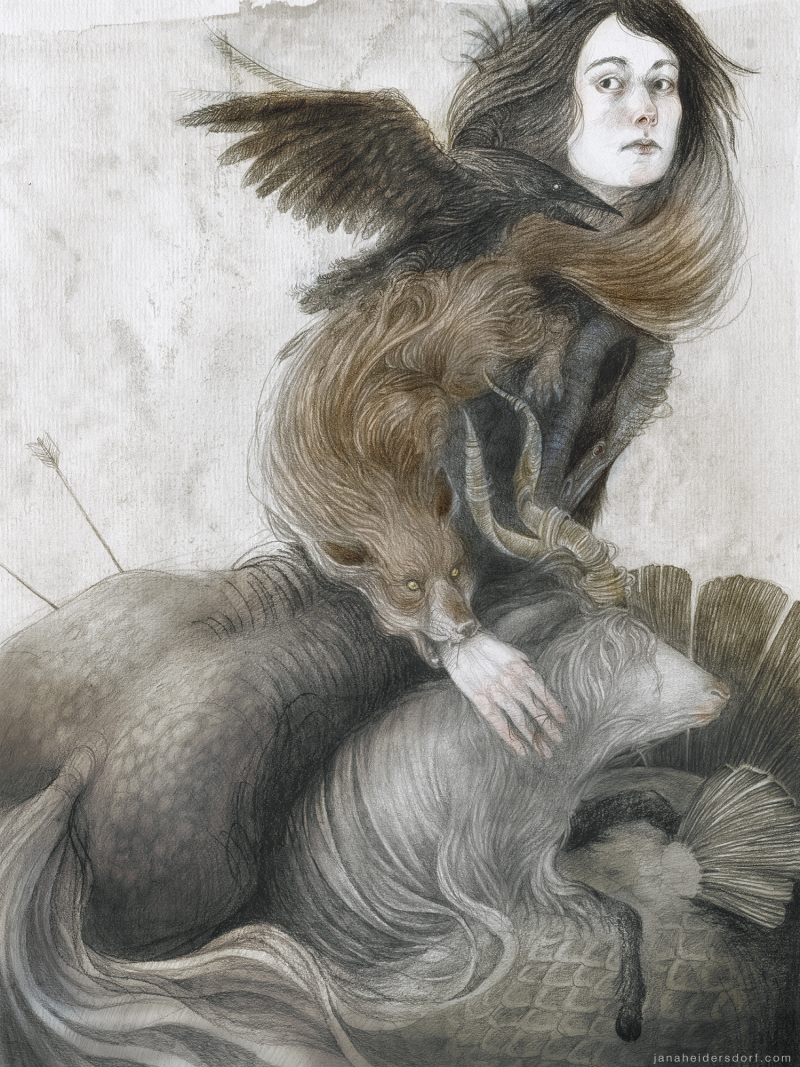 "Writing is a mysterious process, and this vagueness about it makes it into a mystique. Writing is so various; it rises up from so many curiously undetectable springs, it has so many contradictory intentions, and critical judgement swings so wildly that what is good writing in one decade is execrable in the next.

"Like every mystique, it has its sets of shibboleths, its injunctions and freedoms, some of them true or untrue, helpful or harmful, and a good many constitute a systematic discouragement for the beginning writer. Let me mention a few of these myths. 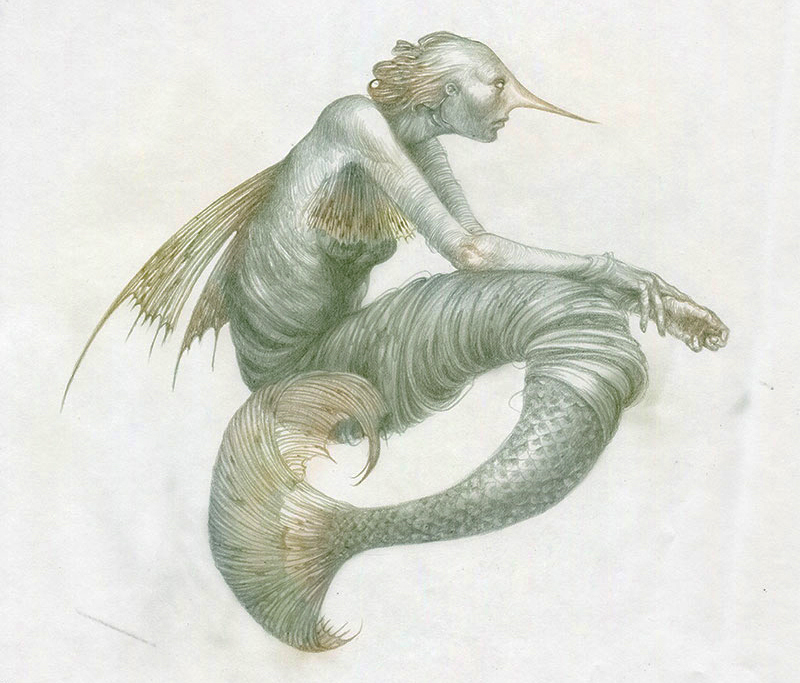 "Writing is a performance. This statement has the impact of aphorism, and aphorism is something we must fix with a wary eye. It sounds good; therefore it must be true. Most writers will say that writing is a matter of groping your way to some kind of truth, an act of exploration. Joan Didion plainly said that she writes so she can know what she is thinking, and V.S. Pritchett, a writer I particularly admire, said that he wrote so he could feel out the surface of what he is and where he lives. Notice the implicit modesty of these statements. And notice the moderate though not unintelligent voice. And notice how these assessments remove the burden some writers feel that they must make every word shimmer and every insight dazzle. Survey the whole field of fiction and you will see that pyrotechnics are only a small part of it. There is a great deal of moving people around and listening to what they are saying. 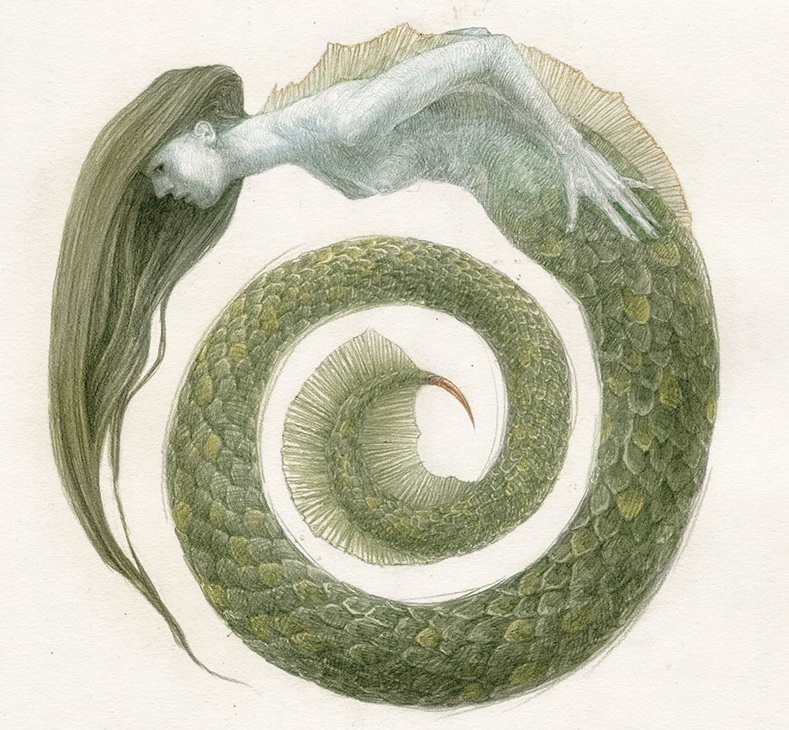 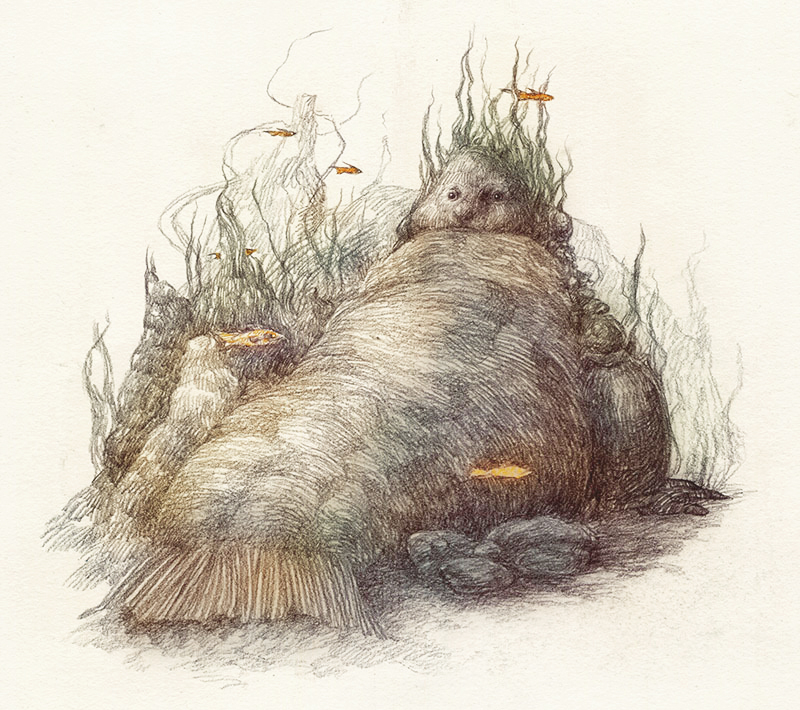 "Another injunction, a double one this time. All fiction is a form of autobiography. And the command: Write about what you know. This is a serious problem for a beginning writer since there's a good chance he undervalues what he knows and a good chance, too, that he doesn't want to risk exposure. Writers of course draw on their own experiences, but the fact is, few draw directly. As Alice Munro wrote in an essay entitled 'What is Real' in the magazine Canadian Forum, she requires for her fiction a portion of actual experience that acts as a kind of starter dough -- I'm assuming you're familiar with bread-baking terminology. John Irving, a writer I have grave reservations about, said in an essay that his writing comes out of the act of revising and redeeming actual experience. Pritchett goes all the way, saying a fiction writer's first duty is to become another person. "One of the most discouraging admonitions is this: Don't write until you have something to say. How often have you heard that one? Clearly everyone has something to say, whether she writes it down or not. You don't get to the age of six without knowing fear or intense happiness. You don't get to the age of twelve without having suffered. You don't arrive at eighteen without knowing what it is to love someone or, just as painful, not to love someone. Everyone has something to say; it may not be codified or arranged in the neat linear patterns of philosophy or the point of view of political commitment or as a moral conviction, but the raw material is there, the 'something' to write about. 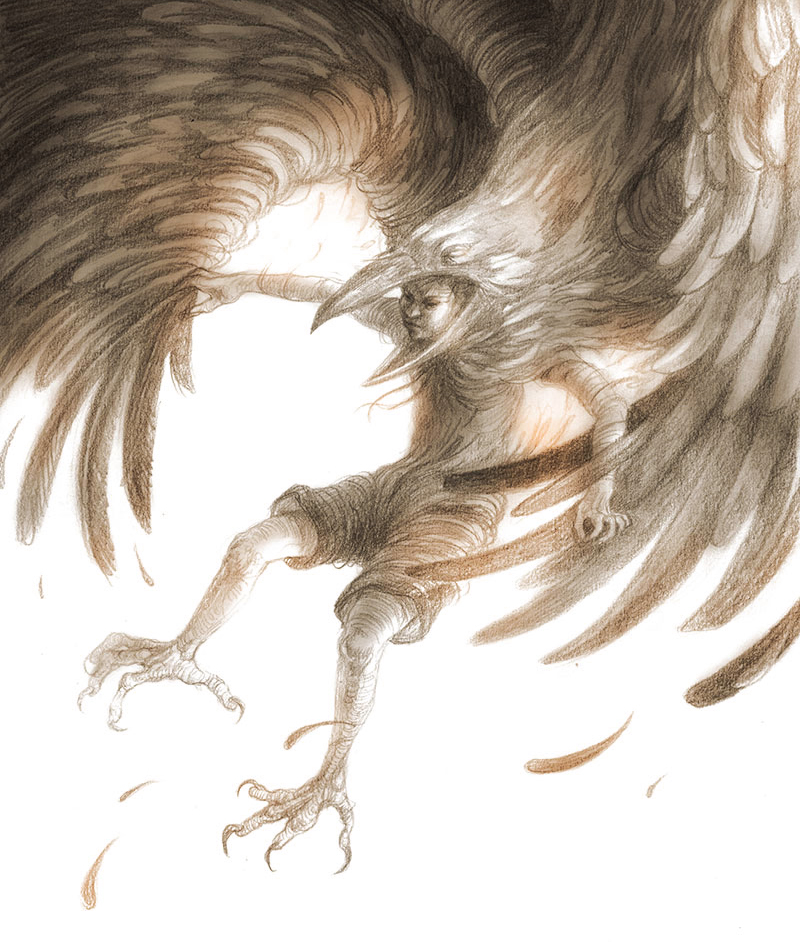 "There's a novel in everyone. You've heard this one. It's a myth that has suffered misinterpretation. There probably is material enough and more in every life, but does this mean that anyone, given time, can write a novel? Time is what you sometimes hear people say they need. In fact, I have heard of one writer who got so tired of hearing people say 'I'd write a book if I had the time,' that when he came to write his autobiography he titled it I Had Time. Time isn't enough. Skills of observation and skills of language (attention to rhythm, extension of vocabulary and distortion of syntax) are required. A feeling for structure. Stamina -- for it takes an extraordinary effort to write even a bad novel or completed short story.

"Finishing has always seemed important to me. The end of a story is as important as the process. The feeling of completion, however imperfect, is what makes art -- when we feel something being satisfied or reconciled or surrendered or earned." 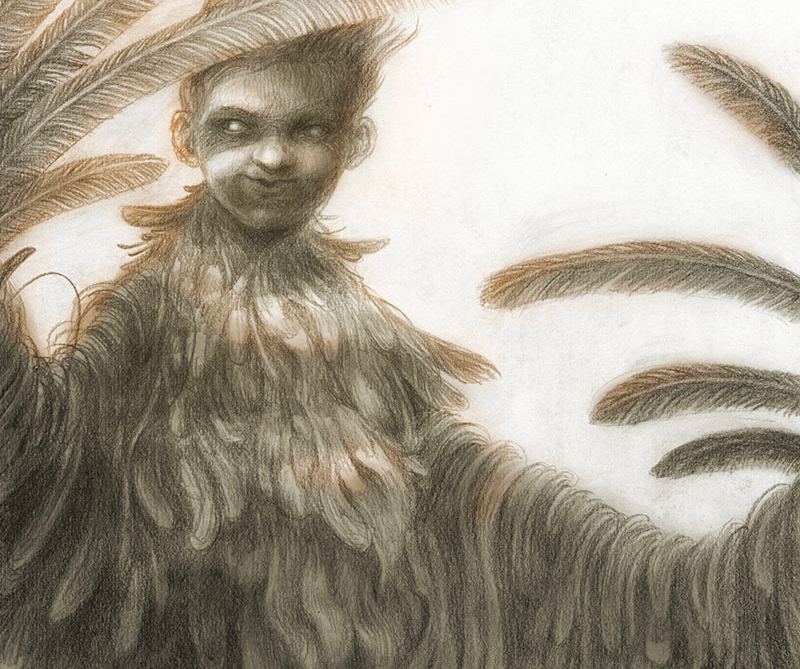 The imagery today is by Jana Heidersdorf, a young illustrator and animator in Germany whose art is inspired by folklore, fantasy literature, and the natural world. Her work is filled with animals, birds, and various forms of aquatic life, viewed through the lens of myth, surrealism, and the darker side of fairy tales. "There is mystery in unpredictability and wildness," she says. "I have an undeniable romantic side that idealizes the rawness and chaos of nature, especially opposed to our need as humans to categorize and order everything. One of the reasons I primarily like to draw animals, or at least non-humans such as mermaids, is that we cannot apply our set morals to them. They can be scary or dangerous, but never evil. That’s something that fascinates me."

To see more of her magical art, please visit her website and Tumblr page. 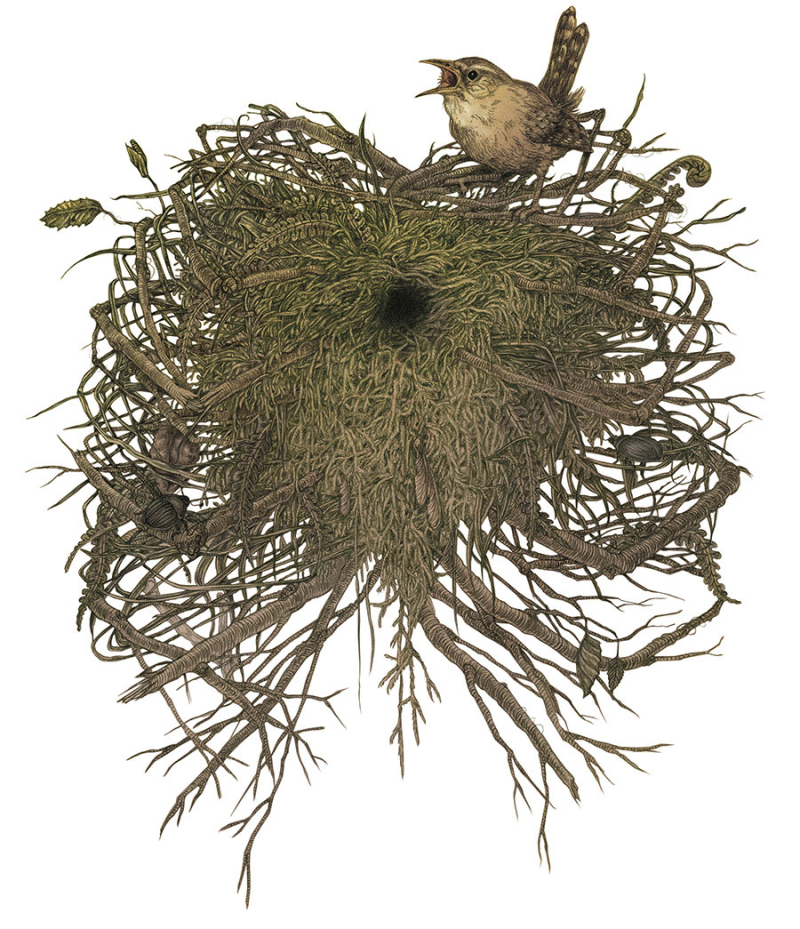 Words: The passage above is from Startle and Illuminate: Carol Sheilds on Writing, edited by Anne and Nicholas Giardini (Random House Canada, 2016). All rights reserved by the author's estate.

Pictures: Jana Heidersdorf's art above includes illustrations from her "Raven Brothers" series, inspired by the Grimms' fairy tale The Seven Ravens, and from her "100 Mermaids" project. Identification can be found in the picture captions. (Run your cursor over the images to see them.) All rights reserved by the artist.

What a wonderful, encouraging post for a writing person. Creation *is* a mysterious and indefinable process, yet one of the worst shibboleths is that writing somehow belongs or is exclusive to an elite group of people, who hold the power to define who is or is not a writer by standards they have themselves created. Yet we do long for the inclusion of others whom we admire, so I feel a glow of affirmation at this statement in particular: "...it takes an extraordinary effort to write even a bad novel or completed short story." Yes, it really does, and is a worthy accomplishment in itself, regardless of whether or not one seeks the imprimateur of "being published."

Birth is not mysterious
to the mother whose body
is cradle and cafe.

Who listens for breath,
feels a whale swimming
in the sea of her.

Sends hand signals
against her skin,
is rewarded with a kick.

So why this mystery
about writing something down?
Just open your mind

Take a gulp of air,
bear down hard,
and push.

"a fiction writer's first duty is to become another person." V. S. Pritchett

And in speculative fiction, I think it becomes important to experience a taste of the surreal through extending one's imagination from a common experience, event/idea or from existing myth and its origins. I often fid myself digging beneath the surface of the obvious and allowing that
"muse of taste" to let me sample what is there and its magic possibilities. Can we become what we crave if only momentarily? I believe that is possible through probing the mysterious aspect of something unknown, unfamiliar or new. The inspiration that comes from tasting the content can lead to diverse
options and scenarios, unexpected surprises and creations.

A few months ago, I went to A Japanese restaurant that was beautifully decorated with a mural of sea and cliff, trees, herons and yes, a hint of water spirits in the rising waves. The food was authentic and home cooked, ( nothing like the sort you find in the chain restaurants dominating the food court at the mall or the fast take-out on the boulevard. This was exceptionally delicious and beautifully prepared in presentation. I had never tasted anything like the lemon roll I ordered, a combo of white fish& salmon rolled up in a seaweed with bits of eel, kelp/spinach, crab and white rice. Fresh lemon halves also garnished this dish, served in a beautiful black-lacquered box.

This taste of the far east and that of myth ink-washed on the walls, let me imagine myself as another creature, an undine or even the Japanese counter-part of a water fairy, the Yosei, also the name of the restaurant, " The House Of Yosei." It led to several poems about a mermaid and selkie but also one about the process ,itself, of tasting the strange magic of inspiration that lets us evolve into another realm, re-creating ourselves through speculative art.

The Muse Of Taste

In "The House Of Yōsei",
she is widespread, swirled
along the wall
in an ink wash

of sea & sky, an overhang
of fir trees and herons
protruding from the cliff;

and on a customer's table
( one of many)
she is laid out
in a black lacquered box.

Her shape rolled
into a blend of crab, salmon and eel,

and at her hips
two lemon slices ( halved),

When consumed , she will claim
the soul of a woman

who has been
all field and woods, roots and feet
inspiring her to shift --

to sea and sand, coral and fins.
.the voice of an undine
singing in the tides. the moonlit hush

Once again, Terri, you have given us wonderful views of writing and encouragement. The art is magical and breathtaking, allowing me to identify as a writer and woman with the perspective of its artist. Many thanks for this.

I think you have just beautifully described the miracle of a story or poem's birth, and what a perfect analogy to that of the child in the womb and the mother inspired by what she carries, by what has been created waiting to be delivered into a voice, living and breathing work of art.

So why this mystery
about writing something down?
Just open your mind

Take a gulp of air,
bear down hard,

Exactly, love that idea of "opening the mind and taking a gulp of air, the courage of life, the breath of risk, and then the resolve to bear down and except what is destined to come out, to be.

Thank you for this,
very much enjoyed your perspective on the creative process.

Big grin. I had a wonderful time with this poem. It is about the third iteration. Not sure if it needs more work. Will know that next week or next month.

Really--you have opened up a can of mermaids, Wendy on the subject of "you are what you eat!" I enjoyed this poem enormously. SO visual and smart.

By the by, I went a very different way with the mermaid and wrote the first three drafts of a picture book called "How to Spot A Fairyafter seeing those amazing pictures.

Oops, I mean "How to Spot A Mermaid!!! Tired after having done taxes all day long. Sigh.

Thanks so much for sharing your ideas on this work and taking the time to read it. I deeply appreciate what you think and also believe your picture book on "how to spot a mermaid" will be marvelous!! I wish you much inspiration, creative energy and success with this new endeavor. It also sounds not only like alot of hard work but also some imaginative fun!!

I'd love to read that Picture Book, Jane. I hope we get to see it someday! <3 Lovely poems everyone. Mermaids are my first love.