Storytelling: the eye and the ear 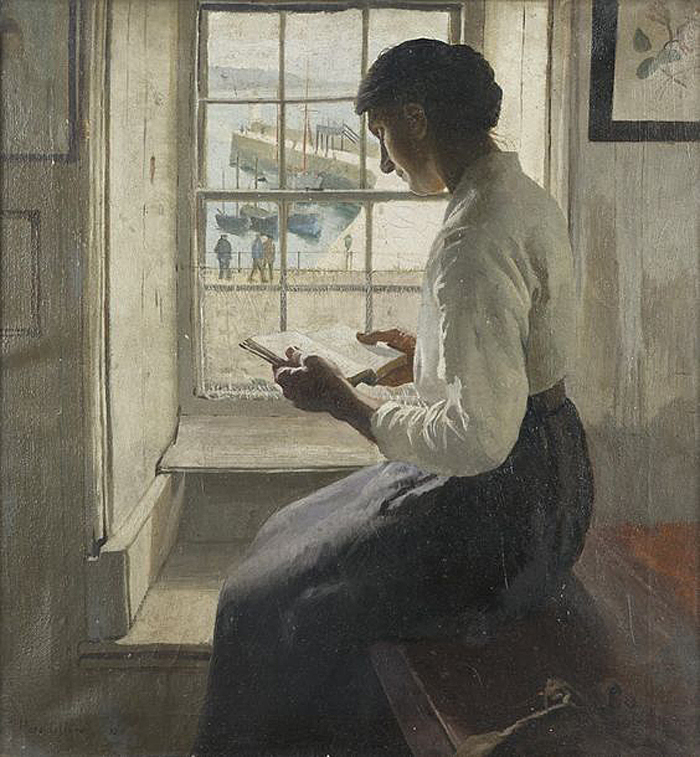 From Touch Magic: Fantasy, Faerie and Folklore in the Literature of Childhood
by Jane Yolen:

"Ancient man took in the world mainly by listening, and listening meant remembering. Thus humans both shaped and were shaped by the oral tradition. The passage of culture went from mouth to ear to mouth. The person who did not listen well, who was tone deaf to the universe, was soon dead. The finest rememberers and the most attuned listeners were valued: the poets, the storytellers, the shamans, the seers.  In culture after culture, community after community, the carriers of the oral tradition were honored. For example, in ancient Ireland the ollahms, the poet-singers, were more highly thought of than the king. The king was only given importance in times of war.... 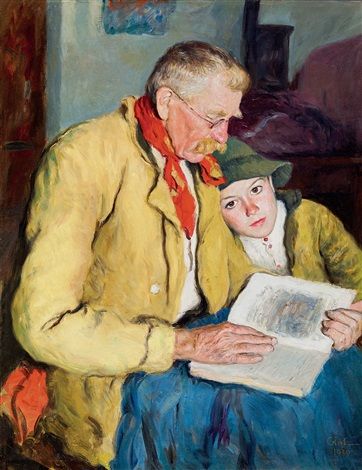 "But the eye and ear are different listeners, are difference audiences. And the literary storyteller is one who must bring eye and ear into synchronization. But it is a subtle art. Just as the art of typography has been called 'the art invisible,' subliminal in the sense that it changes or manipulates the reader's perceptions without advertising its own presence, so, too, the art of storytelling in the printed book must persuade and capitvate. It must hold the reader as the spoken tale holds the listener, turning the body to stone but not the mind or heart."

"The difficulty for me in writing," says Toni Morrison, " -- among the difficulties -- is to write language that can work quietly on a page for a reader who doesn’t hear anything. Now for that, one has to work very carefully with what is in between the words. What is not said. Which is measure, which is rhythm, and so on. So, it is what you don’t write that frequently gives what you do write its power." 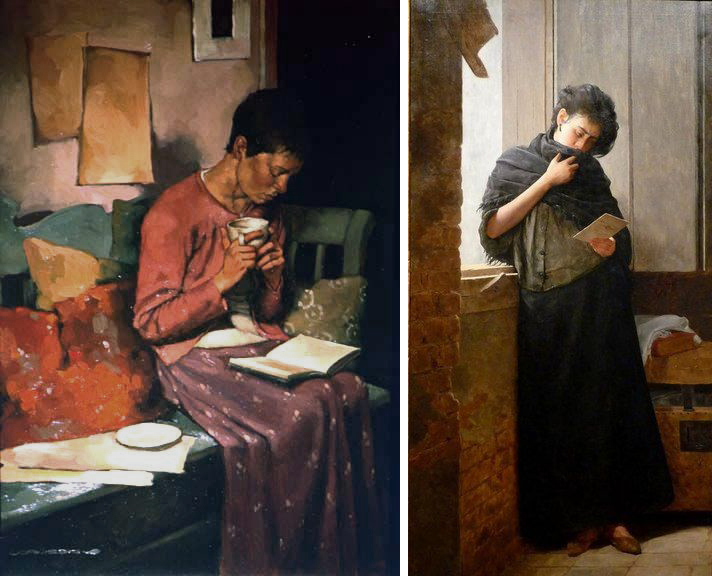 In an essay on writing Ann Patchett notes: "One method of revision that I find both loathsome and indespensible is reading my work aloud when I'm finished. There are things I can hear -- the repetition of words, a particularly flat sentence -- that I don't otherwise catch. My friend Jane Hamilton, who is a paragon of patience, has me read my novels to her once I finish. She'll lie across the sofa, eyes closed, listening, and from time to time she'll raise her hand. 'Bad metaphor,' she'll say, or 'You've already used the word inculcate.' She's never wrong." 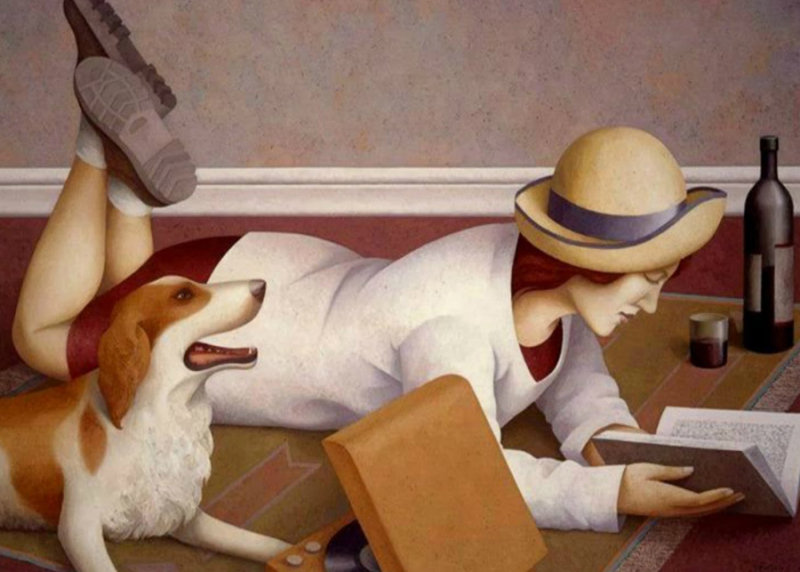 "I've always tried out my material on my dogs first," John Steinbeck once wrote. "You know, with Angel, he sits there and listens and I get the feeling he understands everything. But with Charley, I always felt he was just waiting to get a word in edgewise. Years ago, when my red setter chewed up the manuscript of Of Mice and Men, I said at the time that the dog must have been an excellent literary critic." 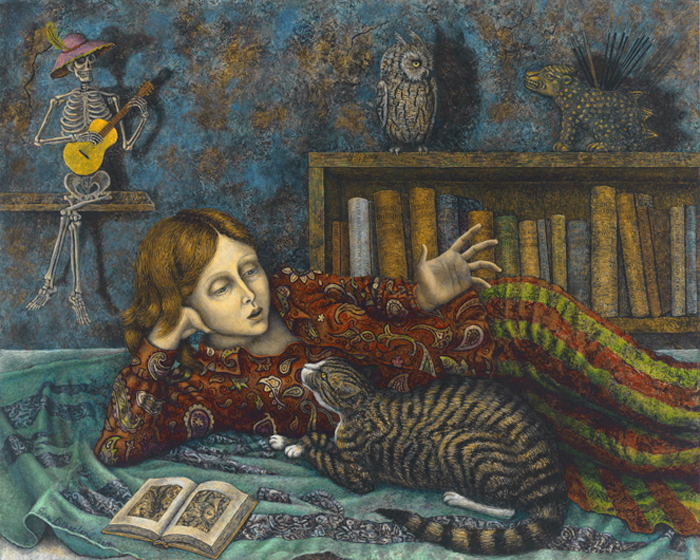 Words: The Jane Yolen passage above is from her essay collection Touch Magic (Philomel Books, 1981), which I highly recommend. The Toni Morrison quote is from "The Art of Fiction No. 134" (Paris Review, Fall 1993). The Ann Patchett quote is from "The Getaway Car, " published in her delightful essay collection This is the Story of a Happy Marriage (Harpers, 2013). The John Steinbeck quote is from The Journal of a Novel: the East of Eden Letters (Viking, 1969). Pictures: The paintings are by Harold Harvey, Oszkár Glatz, Robert Lorusso, José Ferraz de Almeida, Fabio Hurtado, and Gina Litherland, invidually identified in the picture captions. (Run your cursor over the images to see them.)

in From the archives, On reading, On writing | Permalink | Comments (7)

everything about this post is purrfectly poignant, the listening, the reading out loud and the splendid painting 'Conversation with a Cat' by Gina Litherland

My cat, Mr B, always helped me with writing. Whenever I read things aloud to hear the rhythm and music of a piece, he'd come into the room to see who I was talking to, and then when he found there was no one with me, he'd climb onto my lap and stare at the screen as I scrolled down, occasionally patting at the screen as the words slid away. He'd also create new words by walking over the keyboard, as I may have said before. My favourite was 'Magumfawumf'which I've always thought would make a great name for a dragon, especially if the said dragon lived a in a dark and damp hole that smelt of sewage...

Anyway, changing the subject, I mentioned in the earlier post 'Reading, telling, awakening' that I'd read a short story featuring Shakespeare, but couldn't remember the title or the author. Well, 'filkferengi' has been kind enough to post that it was called 'The Immortal Bard' and was written by the great Asimov! I'm so pleased that such a giant of Sci-Fi had similar views as my own when it came to the more ridiculous interpretations and theories put forward by some academics and critics. He also gave a link in the post to a site that gives an outline of the story and the reasoning that inspired it.

This is exactly the post I needed to read today. I am not good at writing a quiet kind of language. My natural voice is as dense as the forest I grew up in, but not many people can wade through it. And yet to me simple language clatters noisily in my brain. I was taught that one should write so that the reader doesn't even see the words, such as Toni Morrison said above, but that is perhaps one of the hardest things to do.

I have always loved the story tellers, those of ancient Ireland, American Indian, and on and on. Where did the bible come from, story tellers? In the days when I could I went to every story telling festival I could get to and I fostered story telling contests in the library.

I'm a she, but you're very welcome; I'm glad it helped.

Huge apologies! I don't normally make such assumptions; very remiss of me!

The paintings are really beautiful, they just take your breath away.