Tunes for a Monday Morning
For Halloween: At the Death of the Year

The Blessings of Otters 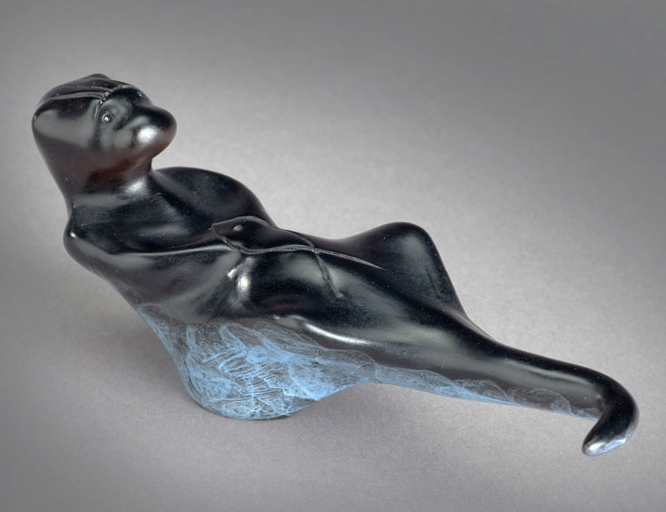 I'm re-posting this piece from 2015 not only because it reminded me of mythographer Martin Shaw's recent video on the subject of blessings (which I recommend), but also because it is one that I keep thinking about in this angry, divisive political climate. As the Indian sage Ramana Maharshi once said when asked how we should be treating others: "There are no others."

One of the mythic borderlands I'm especially drawn to (as evidenced by my writing and art over the decades) is the place where humans and animals meet: as neighbors, as cousins who speak each other's language, as shape-shifters in each other's skins. 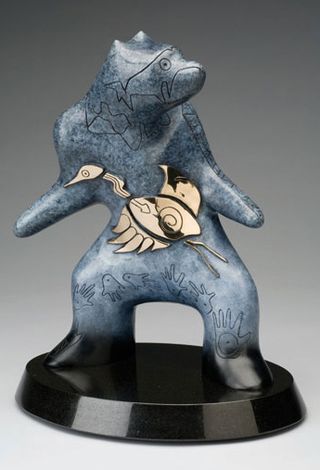 In "Voyageur," a gorgeous essay by Scott Russell Sanders, the writer and his daughter watch otters during a camping trip in the geographic borderlands between Minnesota and Ontario. What was it that kept him riveted to the spot, watching the animals with such intense fascination? What did the otters mean to him, and what did he want from them?

Not their hides, not their meat, not even a photograph, says Sanders, "although I found them surpassingly beautiful. I wanted their company. I desired their instruction -- as if, by watching them, I might learn to belong somewhere as they so thoroughly belonged here. I yearned to slip out of my skin and into theirs, to feel the world for a spell through their senses, to think otter thoughts, and then to slide back into myself, a bit wiser for the journey.

"In tales of shamans the world over, men and women make just such leaps, into hawks or snakes or bears, and then back into human shape, their vision enlarged, their sympathy deepened. I am a poor sort of shaman. My shape never changes, except, year by year, to wrinkle and sag. I did not become an otter, even for an instant. But the yearning to leap across the distance, the reaching out in imagination to a fellow creature, seems to me a worthy impulse, perhaps the most encouraging and distinctive one we have. It is the same impulse that moves us to reach out to one another across differences of race or gender, age or class. What I desired from the otters was also what I most wanted from my daughter and from the friends with whom we were canoeing, and it is what I have always desired from neighbors and strangers. I wanted their blessing. I wanted to dwell alongside them with understanding and grace. I wanted them to go about their lives in my presence as though I were kin to them, no matter how much I might differ from them outwardly." 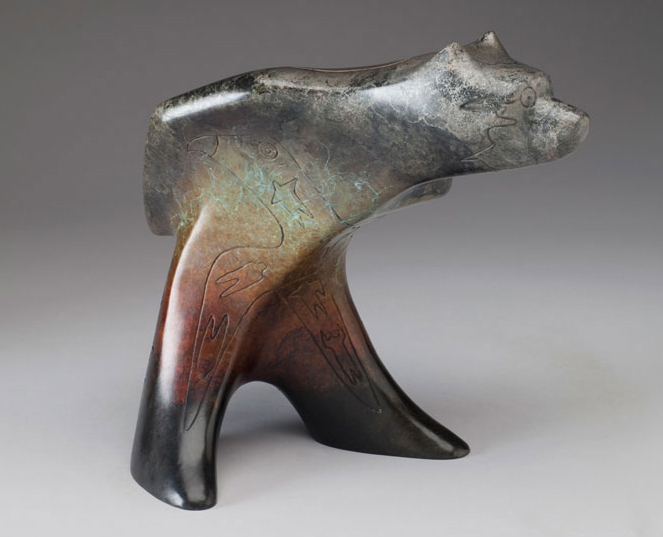 Later in essay, Sanders writes about two loons who wake him in the middle of the night, "wailing back and forth like two blues singers demented by love," and the bald eagle who watches their progress down the river from its perch on a dead tree's branch. What did the eagle see, he wonders?

"Not food, surely, and not much of a threat, or it would have flown. Did it see us as fellow creatures? Or merely as drifting shapes, no more consequential than clouds? Exchanging 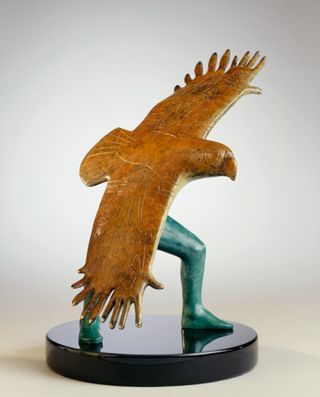 stares with this great bird, I dimly recalled a passage from Walden that I would look up after my return to the company of books: 'What distant and different beings in the various mansions of the universe are contemplating the same one at the same moment! Nature and human life are as various as our several constitutions. Who shall say what prospect life offers to another? Could a greater miracle take place than for us to look through each other's eyes for an instant?'

"Neuroscience may one day pull off that miracle," Sanders continues, "giving us access to other eyes, other minds. For the present, however, we must rely on our native sight, on patient observation, on hunches and empathy. By empathy, I do not mean the projecting of human films onto nature's screens, turning grizzly bears into teddy bears, crickets into choristers, grass into lawns; I mean the shaman's leap, a going out of oneself into the inwardness of other beings.

"The longing I heard in the cries of the loons was not just a feathered version of mine, but neither was it wholly alien. It is risky to speak of courting birds as blues singers, of diving otters as children taking turns on a slide. But it is even riskier to pretend we have nothing in common with the rest of 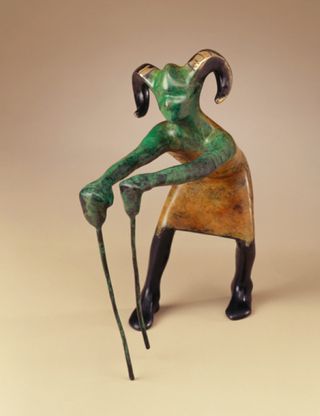 nature, as though we alone, the chosen species, were centers of feeling and thought. We cannot speak of that common ground without casting threads of metaphor outward from what we know and what we do not know.

"An eagle is other, but it is also alive, bright with sensation, attuned to the world, and we respond to that vitality wherever we find it, in bird or beetle, in moose or lowly moss. Edward O. Wilson has given this impulse a lovely name, biophilia, which he defines as the urge 'to explore and affiliate with life.' Of course, like the coupled dragonflies that skimmed past our canoes or like osprey hunting fish, we seek other creatures for survival. Yet even if biophilia is an evolutionary gift, like the kangaroo's leap or the peacock's tail, our fascination with living things carries us beyond the requirements of eating and mating. In that excess, that free curiosity, there may be a healing power. The urge to explore has scattered humans across the whole earth -- to the peril of many species, including our own; perhaps the other dimension of biophilia, the desire to affiliate with life, could lead us to honor the entire fabric and repair what has been torn." 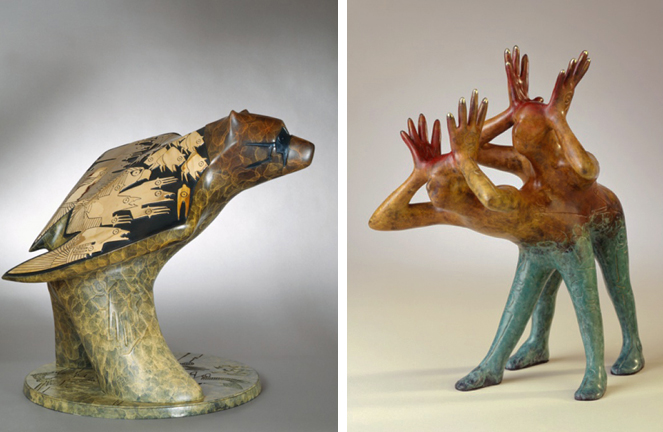 In the conclusion of his essay, Sanders points out that the fellowship of all creatures "is more than a handsome metaphor. The appetite for discovering such connections is also entwined in our DNA. Science articulates in formal terms affinities that humans have sensed for ages in direct encounters with wildness. Even while we slight or slaughter members of our own species, and while we push other species toward extinction, we slowly, 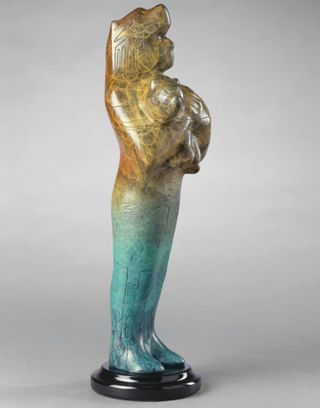 painstakingly acquire knowledge that could enable us and inspire us to change our ways. Only if that knowledge begins to exert a pressure in us, and we come to feel the fellowship of all beings as potently as we feel hunger and fear, will we have any hope of creating a truly just and tolerant society, one that cherishes the land and our wild companions along with our brothers and sisters.

"In America lately, we have been carrying on two parallel conversations: one about respecting human diversity, the other about preserving natural diversity. Unless we merge those conversations, both will be futile. Our efforts to honor human differences cannot succeed apart from our effort to honor the buzzing, blooming, bewildering variety of life of earth. All life rises from the same source, and so does all fellow feeling, whether the fellow moves on two legs or four, on scaly bellies or feathered wings. If we care only for human needs, we betray the land; if we care only for the earth and its wild offspring, we betray our own kind. The profusion of creatures and cultures is the most remarkable fact about our planet, and the study and stewardship of that profusion seems to me our fundamental task."

The sculptures pictured here are by the New Mexican artists Gene & Rebecca Tobey, who worked for years in a fertile partnership creating scuptures, paintings, and drawings inspired by nature and the mythic symbolism of the North American continent. (The titles of the pieces can be found in the picture captions.) Gene died of leukemia in 2006, but Rebecca carries on their beautiful work. Please visit the Tobey Studios website to see more of their collaborative art, and the Rebecca Tobey website for her current pieces. 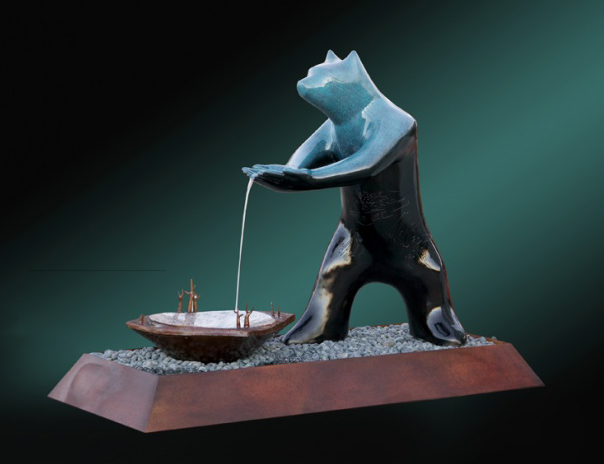 The passages by Scott Russell Sanders above are from "Voyageurs," an essay in Writing from the Center  (Indiana University Press, 1997), highly recommended. All rights to text & imagery above reserved by the author and artists. Many thanks to Ellen Kushner for the opening quote by Ramana Maharshi (1879-1950). For more otters, go here.

in From the archives | Permalink | Comments (0)