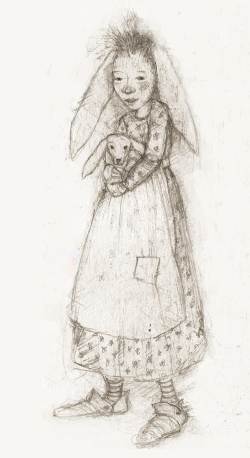 I've always loved the idea of a holiday dedicated simply to being thankful for the good things in our lives. "Gratitude unlocks the fullness of life," writes Melody Beattie. "It turns what we have into enough, and more. It turns denial into acceptance, chaos to order, confusion to clarity. It can turn a meal into a feast, a house into a home, a stranger into a friend. Gratitude makes sense of our past, brings peace for today, and creates a vision for tomorrow."

On this Thanksgiving day, I am thankful for readers -- for all who share my love of books, and make it possible for writers to keep on writing. Especially for you, dear people: for those who read every single Myth & Moor post, and those who drop in just once in a while; for those who share thoughts and poems in Comments section, and those who prefer to just read and stay silent; for those who come here for discussions of books and art, and those who really just come for Tilly (and I know, via the mail I receive, that there are quite a few of the latter!). I'm grateful for every reader here, and this is for you.

Here are a few of the other things I'm grateful for, today and every day: 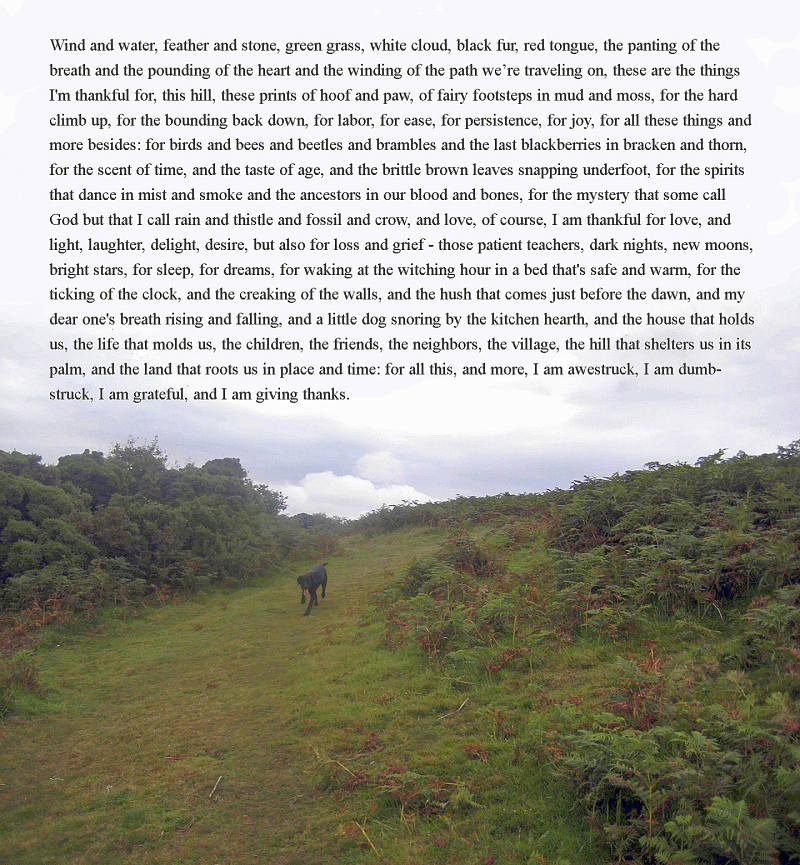 Pictures:  The drawing of a bunny girl and friend is from one of my sketchbooks. The picture of me and Tilly was taken by Ellen Kushner. Related posts: "The secular sacred" and "A democracy of species."

Amongst all the gratitude shared by All, I an grateful for you, Terri, and your wonderous world of love and wild imaginings. Happy Thanksgiving. xx

Happy Thanksgiving to you and thank you for all the wonderful photos, essays, poems, paintings and perspectives you give us each day. We are so blessed and enriched by your continuous efforts to present us with diverse ideas and such interesting info on the world beyond our ordinary lives and how that world affects our immediate presence in real time. I loved your essay on Thanksgiving and think it is absolutely beautiful. The imagery and language so engaging and intense with beauty And yes, I too, am so thankful and intrigued by those " spirits that dance in the mist and smoke" and "those ancestors" that stir in our bone and blood". I love to inhale the green presence of ferns, the dampness of rain and loam, the raw cry of the crow and raven, to immense myself in the breadth of sky and field, the secrets of the desert and mountains. Your essay captures so much of what I personally feel and revere!!

About a decade ago around Thanksgiving, I had seen a story on PBS about an 18th century midwife, named Martha Ballard, who kept a meticulous journal about her patients, treatments, weather conditions and everyday events in her life. The entries were written from a very pragmatic perspective, direct and to the point. Yet, in one particular passage , which the show emphasized, her tone changed. She recorded the night her barn burned down and in the middle of the story's account, she interjected a rather strange statement concerning the tragic event with the erupting destruction it incurred. She mentioned , out of the blue, that her daughter had turned 18 that day. Normally, from our modern perspective that would seem a distant thought during the onset of flames and charring timber. However, this was the 18th century and a lot children died under the age of one or if not that early, by five. So in a season when fruit and crops where gathered, when leaves flamed in color but held a brief time of bloom, this birthday celebrating her child's entrance into womanhood was miraculous, a gift from nature and God. And though part of Martha's farm was destroyed, she still recognized this offering of life and acknowledged with awe and gratitude, her girl's full growth into a bride and future mother. And on this day of thanksgiving, I realize that despite the setbacks, sorrows and challenges we struggle to survive, overcome, there are the blessings of being alive and interacting with those we love and need. This poem is about Martha Ballard and her daughter from a reflective stance. She is standing in front of her rebuilt barn and reminiscing about that night in October when everything seemed lost and yet found through a sudden realization, Hannah's adult presence.

The barn extends its length
from road to hilltop
overlooking the river.

Its wall
rests on the edge of twilight
wearing a season patched by leaves.

A cloak of rags,
the foliage reminds me
of one I grabbed in another life
watching fire turn
this building to skeletal timber.

I stood silent
clutching a quilt, hearing livestock
trample the fence -- but thought
only of my daughter's age.

She had turned 18 that day
fair, tall enough
to pull herbs from the kitchen ceiling.

Her arm reached long and smooth
like a shaft of moonlight through the room
whenever she prepared
supper late and birds were hushed
in the field by evenings shadow.

Her life had flourished
beyond cradle to dower chest,

a young bride
waiting to build her first home

while part of mine
was burning down.

At that moment,
nothing mattered but Autumn
offering Hannah, who had grown
to harvest womanhood.

((((Terri and her kin)))) Thank you so much! Love seeing you and reading your Thanksgiving words.
One * Faithful* Grateful* Reader

Happy Thanksgiving to you and yours, please give Tilly a pat for me. I enjoy all you post here. One of me many things I am thankful for.

And many, many thanks to you too for this wonderful resource.

A day without reading? Nah.

Terri, I am very grateful for your writing and blog. Your grateful piece is so lovely. Reading it brought both joy and thoughtfulness to me today. Thank you.

Thanks so very much Terri for all the things you shared here for so many years!

You should be writing picture books, too, Wendy. That is a stunningly beautiful poem and the last verse:

"At that moment,
nothing mattered but Autumn
offering Hannah, who had grown
to harvest womanhood."

is so perfect a round up of the midwife's story, I am holding the words in my mouth even now, five minutes after first reading the poem.

Loss, that patient teacher,
who sits by the bedside
in the mid night.

Who whispers his name into her ear
as she falls asleep
on his side of their big bed.

Who leaves open his favorite book,
slides his photograph
between the leaves.

Who says his name aloud
into the empty house,
so that the echoes return it.

Who places an extra setting
at Thanksgiving dinner
for the one who can not come.

Until at last the one
who has been left behind
goes ahead.

Your gratitude post is perfect. I am simply thankful for you,Terri, and how you think and what you write and your keen eye and heart. I am thankful for the wonderful pictures of where you live, the walks, and all the little nooks and crannies in the woods that have me imagining who lives in them. :) And I am thankful for Tilly. :) Blessings on the wind and across the sea.

Thank you Terri, for your presence in the world. Your blog continues to be such an inspiration to me. I love today's photos--especially the one with you and Tilly sitting near a stream. Those moss covered stones look just like my beloved Catskills. And I love the message on that mug full of flowers. Blessings of health, ease and love to you.

thank you so much Jane

As always, I am very touched by your beautiful comments and deeply appreciate your continual interest I my work, your perspective and counsel!! Picture books, indeed, is a very intriguing possibility. Thank you for the suggestion and wishing you and yours a very peaceful and blessed holiday!.

This poem moves me so very deeply and again, is beautifully written with memory and poignant reflection. I cry as I read these lines

Who leaves open his favorite book,
slides his photograph
between the leaves.

Who says his name aloud
into the empty house,
so that the echoes return it.

Who places an extra setting
at Thanksgiving dinner
for the one who can not come.

they haunt my heart and I think you handle this with such delicate mastery and grace. And yes, "Loss" is a patient teacher and you could not have chosen a more perfect image or description. Thank you for sharing this, it is incredibly beautiful and moving!

Thank youm Brenda-Dianne. I hope your Thanksgiving Day was a good one.

I agree with Jane. I'd love to see your words out in the world in many forms, and this is such a touching and visual poem.

And this is somewhat off the subject of poetry, have you watched the UK television program "Call the Midwife"? I'm not a huge tv watcher, but I absolutely love this series -- although I admit that when it was first described to me (nurses? nuns? women in labor?), I was dubious. I love it because it chronicles the social history of London's East End from the post-War years onward; because it's all about women; and because in contrast to the daily news (Trump in America, Brexit here), it's so lovely watching people dedicated to lives of service, and quiet domestic joys.

Same to you, Kathryn, from the hills of Devon.

Thank you for being here so long and so regularly, Mokihana. I'm so thankful for your companionship on this long road into the mythic realms.

Tilly has been duly patted. Thank you for your sweet words, Lisa.

Years ago, I went through a period of several months in which I couldn't read at all due to the concentration-killing properties of an illness, and it was profoundly disturbing. Listening to audiobooks or using other media helped a little, but being unable to read myself made me feel like an entirely different person. Although it made me appreciate books even more, I don't recommend the experience!

Thank you Lin,and thank you Tororo. I'm glad you both found your way here.

Yes, that is exactly what I meant by image of loss as a patient teacher -- but of course you've expressed it more fully and beautifully than I ever could.

I have David in my thoughts today. And send you love.

The same right back at you, Judith! I hope your work is going well, and look forward to seeing you back in Devon one of these days. Much love to you and yours.