On awe, ethics, and elders
Tunes for a Monday Morning 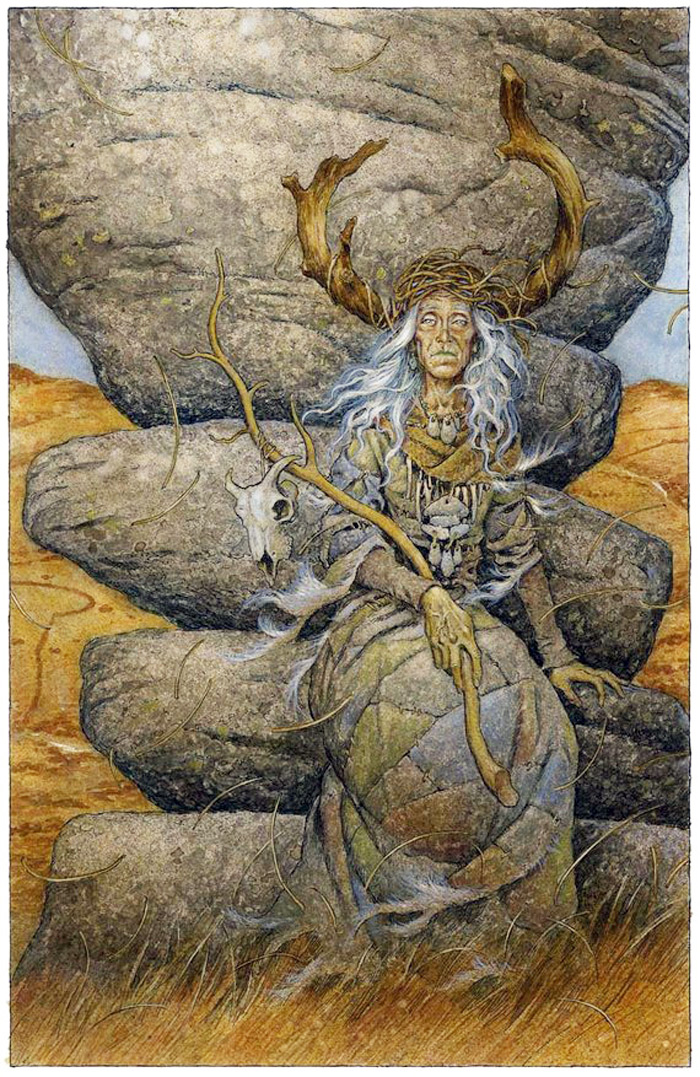 From A Circle of Quiet by Madeleine L'Engle:

"I am part of every place I have ever been: the path to the brook; the New York streets and my 'short cut' through the Metropolitan Museum. All the places I have ever walked, talked, slept, have changed and formed me. I am part of all the people I have known.  There was a black morning when [a friend] and I, both walking through separate hells, acknowledged that we would not survive were it not for our friends who, simply by being our friends, harrowed hell for us. I am still every age I have ever been. Because I was once a child, I am always a child. Because I was once a searching adolescent, given to moods and ecstasies, these are still part of me, and always will be. Because I was once a rebellious student, there is and always will be in me the student crying out for reform.

"Far too many people misunderstand what putting away childish things means, and think that forgetting what it is like to think and feel and touch and smell and taste and see and hear like a three-year-old or a thirteen-year-old or a twenty-three-year-old means being grownup. When I'm with these people I, like the kids, feel that if this is what it means to be a grownup, then I don't ever want to be one. Instead of which, if I can retain a child's awareness and joy, and be in my fifties, then I will really learn what it means to be a grownup. I still have a long way to go." 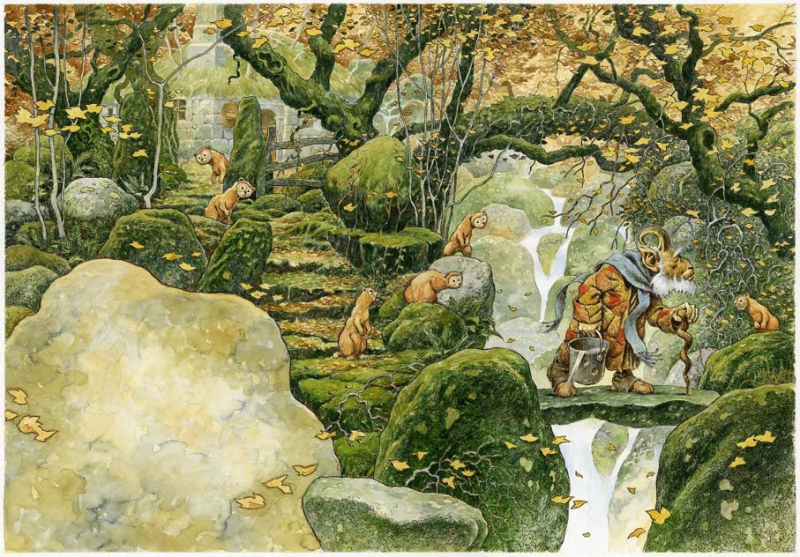 From an interview with Ursula K. Le Guin:

"The whole process of getting old -- it could have been better arranged. But you do learn some things just by doing them over and over and by getting old doing them. And one of them is, you really need less. And I’m not talking minimalism, which is a highly self-conscious mannerist style I can’t write and don’t want to. I’m perfectly ready to describe a lot and be flowery and emotive, but you can do that briefly and it works better. My model for this is late Beethoven. He moves so strangely and quite suddenly sometimes from place to place in his music, in the late quartets. He knows where he’s going and he just doesn’t want to waste all that time getting there. But if you listen, if you’re with it, he takes you with him. I think sometimes about old painters -- they get so simple in their means. Just so plain and simple. Because they know they haven’t got time. One is aware of this as one gets older. You can’t waste time." 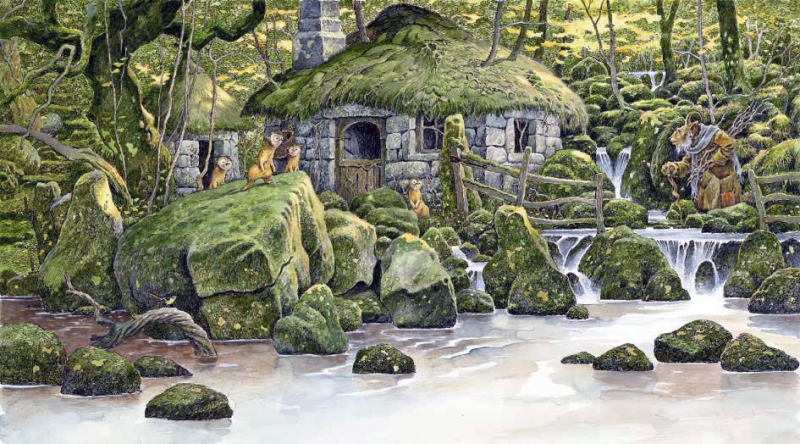 From an interview with Barry Lopez:

"Up until recently, the phrase 'my work' meant solely what I was writing. Now I'm not sure what it means. I feel a sense of urgency, a sense of national threat. Because of that I've become more involved in the past few years with higher education, with public presentations and collaborative work, with 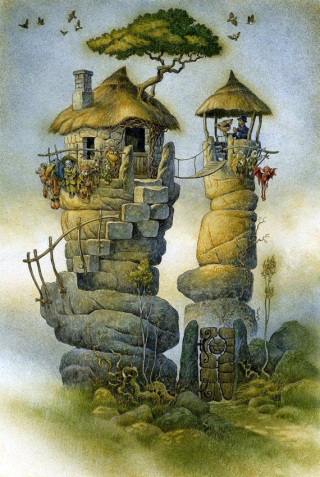 trying to advance the work of younger writers. I have to be honest with you and say I have doubts about doing these things. I feel the weight of an enormous amount of experience, travel experience in particular, which I've not written about. Sometimes I worry that without my knowing it a half-formed story will leave my imagination, as if it'd become impatient. For someone who's not a social activist, I seem suddenly to be up to my neck in such things....Maybe what I'm really working on, by writing autobiography and pursuing what I suppose is an effort at public service, is grappling with my own reputation as a writer and what to do with it. A curious thing can happen to you as a writer. You go along in your twenties and thirties and forties, writing books and articles. Then people really want to talk to you, they want to know what kind of book is coming next. They have expectations. If their perception -- your reputation -- makes you self-conscious, or anxious, it can ruin your work.

"I've seen an ambivalence emerge in some writers as they enter their fifties. You ask yourself, what am I really up to here? In a very small way I've become something of a public figure in my fifties. If you find yourself in this position, what are you supposed to do? The answer -- for me -- is to take it for what it's worth. Lend your name to worthy causes and help younger writers. Read other people's manuscripts. Try to open doors for young writers who are devoted to story and language, and who have serious questions about the fate of humanity. You say to yourself, once older writers gave to me (or didn't); now, regardless, I have to see who's coming along and how I can help them."

Lopez wisely adds: "But you must draw a line in all this, too, to protect your own writing time." 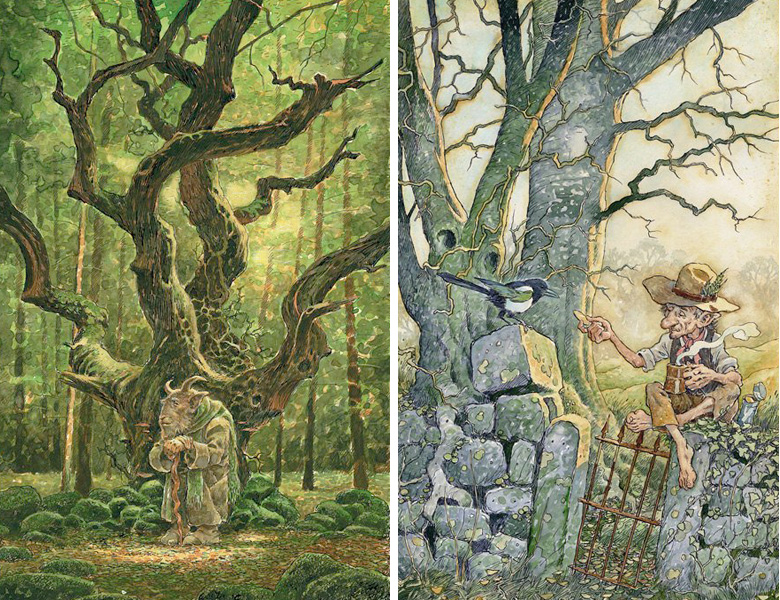 The art today is by our friend and neighbor David Wyatt, one of Britain's premier book illustrators (as well as the great love of Tilly's life). These paintings are from his deeply magical Mythic Village and Old Goat series.

"I grew up in West Sussex," he says, "drawing a lot and messing around in rivers a lot. Nothing has changed much, except I do them on Dartmoor now."

To see more of David's work, please visit his beautiful website and charming illustration blog. His prints are available here. 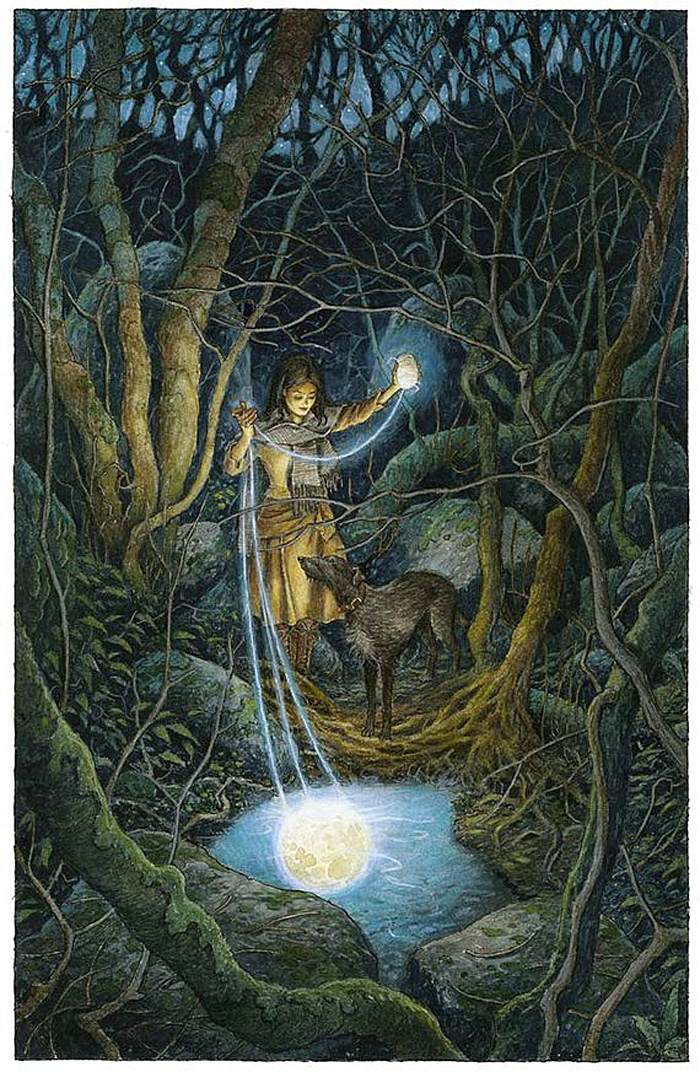 The passages above come from: "Ursula K. Le Guin: The Art of Fiction No. 221" by John Wray (Paris Review, Fall 2013),A Circle of Quiet by Madeleine L'Engle (Harper San Francisco, 1972 ), and "The Big River: A Conversation with Barry Lopez on the McKenzie River" by Michael Shapiro (Michigan Quarterly Review, Fall 2005). All rights reserved by the authors.

In his free hand

IN place
AT the edge
My mate and I did come.
TO a cross roads
FROM within
Perplexed and knotted.

An Old Goat
met us
UP ahead
A pail of
water in his free hand.
Left us
with the pail.

I have so loved the week's blog offerings. I who am a read-each-post kind of reader, read this one and then let your magical way with text and images lead me to David Wyatt's Old Goat Series of paintings. Ahh.

My husband and I are playing with making a gift to give to a Goat (a Capricorn) for her birthday coming soon. A card game for a goat. This post inspires me and makes me smile with possibility.

Signed with love,
An Old Nanny

All this week, I loved the sayings, wisdom, art and theme of the posts on your blog. Thank you so much for these views on age, weather, ethics, artistic perspective and simply dealing with the world around us through the sage and accomplishment of others.

As I grow older, I am learning to accept the fact that we become more vulnerable not only to the elements but to the challenges of our maturing condition. And acceptance is an important part of that process; and also realizing that despite measures taken to retain youth, keep limber, control bp, cholesterol and other metabolic factors, nothing serves as a guarantee against the inevitable. There are no magic pills, rituals, potions, chants, or blessings to combat this. It simply happens.

The Woman Who Always Looked Over Her Shoulder

When balance betrayed the dancer
and her body slipped in the tub,
despite the use of shower gel
and nonksid mat, she thought --- how
can this happen to me?

Way before menopause
she cremated those cravings
for sugar and salt. Hiked trails
and swam in mountain lakes.

Her cabinet was the mount
of olives, cans of black, glass
crewets of virgin oil -- extra light.

She always launched her pale shoulder
as a look-out point, voice humming
herbs and omega threes, a novena
for optimal health.

So gracefully her hand
circled the fish, perfuming sole
with sweet basil, tarragon and dill.

And still, this morning happened
but nothing was broken. The bath
did not become a porcelain casket;

and mourning now becomes
The Lady. Her cosmetic face shocked
discovering how loss
has no preference. No ritual. No altar.

Love the idea of journeying within, of coming to terms with oneself or selves ( in the case of a paternship) as we age. And there within, is the guardian spirit, the keeper of self-knowledge in the metaphoric shape of the goat. He hands you both the pail of water and it not only becomes the mirror or well of self reflection, realization. When we search for answers, ideas or meaning, we conjure him only to find there is more wondering and thinking to do. Lovely poem, and one I very much enjoyed.

Yes, yes. There is always more even after climbing as goat. Thank you for your kind response Wendy.

And to the Dancer ... ain't it the truth that even after novena (love the novena for optimal health!) the goddess is an equal opportunity diva. Only one way out and its the poetry of noticing that makes for so much wealth. Nicely done Wendy.

Mokihana: reads like a marriage between a tarot card, full of deep swirlings and a prophet's puzzle, both of which lead us into deeper probings of self.Not on the actual level, but the mystic. Take a look indeed.

how loss
has no preference. No ritual. No altar.

A marriage between a tarot card and prophet's puzzle ... scry the pail's water... Yes!
Thank you for the view, Jane.

I Had two years of tap and one year of ballet. I think it only helped to a degree my sense of balance, maybe a little confidence. Not much more but still I do love the ballet. Anyway, thanks so much for commenting. As always I appreciate your interest in my work. It means a lot!

Thanks so much for reading and commenting on this poem, Mokihanna, I deeply appreciate it! And yes, there is only one way out!