The logos of the land: living, working, and writing fantasy while rooted in place
Something to do with love

The language of the animate earth 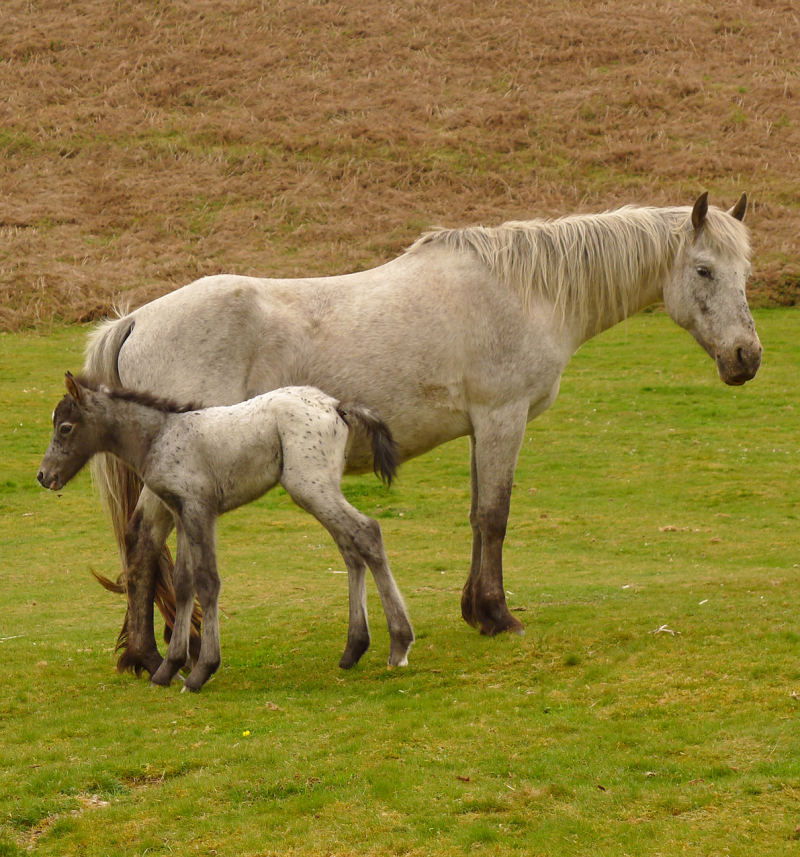 From The Spell of the Sensuous: Perception & Language in a More-Than-Human World by David Abram:

"The sense of being immersed in a sentient world is preserved in the oral stories of indigenous peoples --in the belief that sensible phenomena are all alive and aware, in the assumption that all things have the capacity for speech. Language, for oral peoples, is not a human invention but a gift of the land itself. 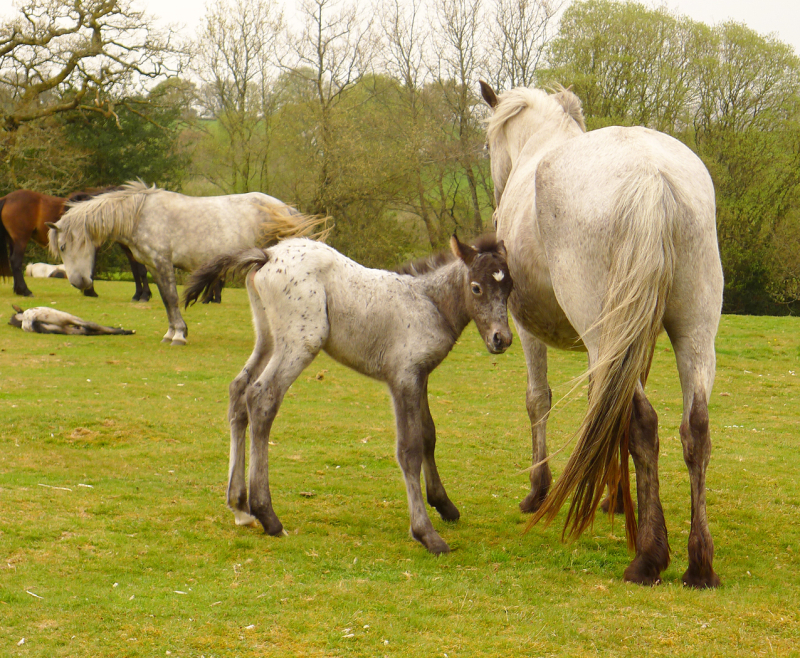 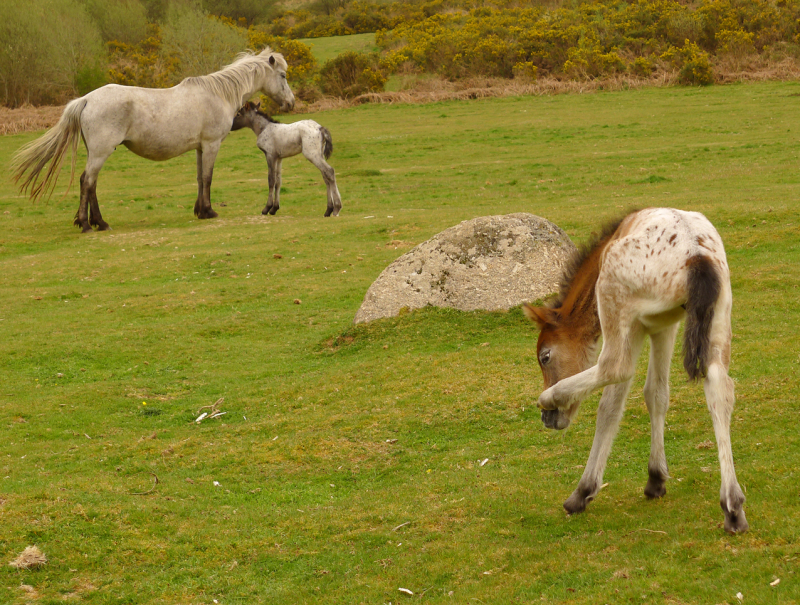 "I do not deny that human language has its uniqueness, that from a certain perspective human discourse has little in common with the sounds and signals of other animals, or with the rippling speech of the river. I wish simply to remember that this was not the perspective held by those who first acquired, for us, the gift of speech. 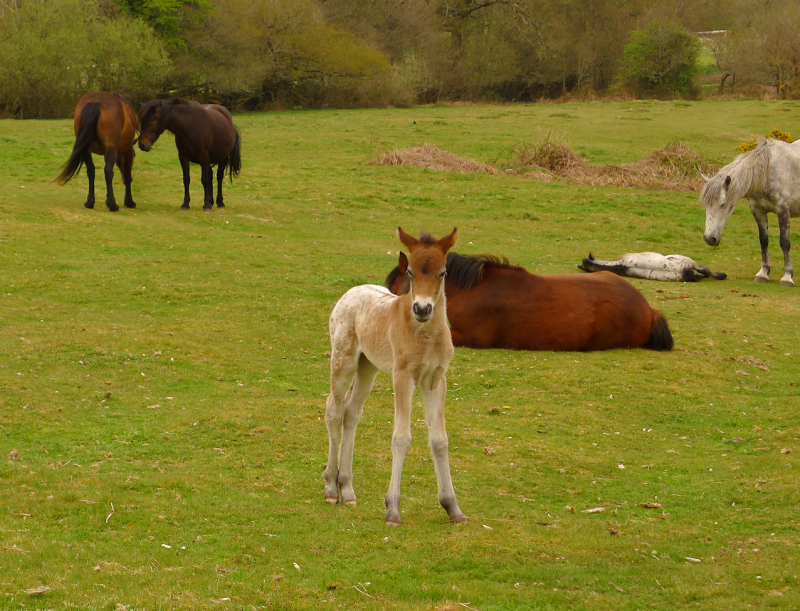 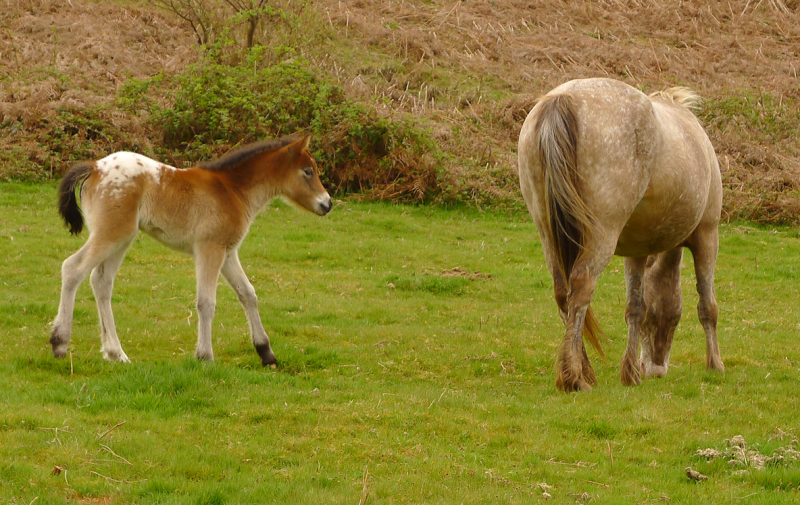 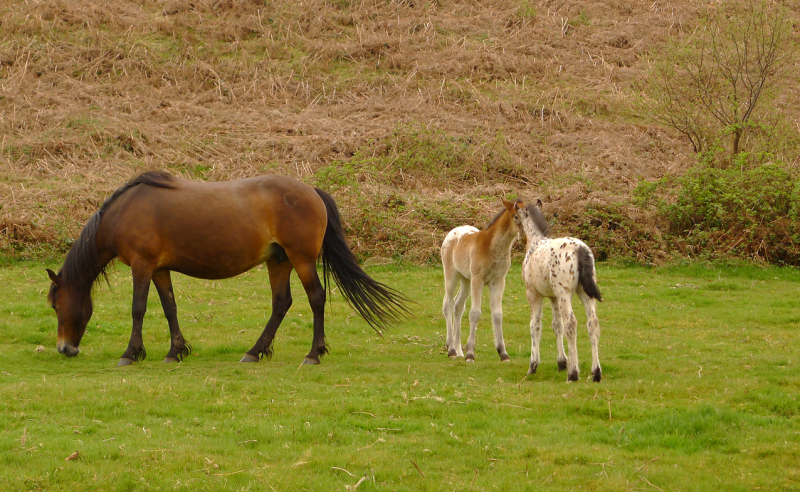 "Human language evolved in a thoroughly animistic context; it necessarily functioned, for many millenia, not only as a means of communication between humans, but as a way of propitiating, praising, and appeasing the expressive powers of the surrounding terrain. Human language, that is, arose not only as a means of attunement between persons, but also between ourselves and the animate landscape. 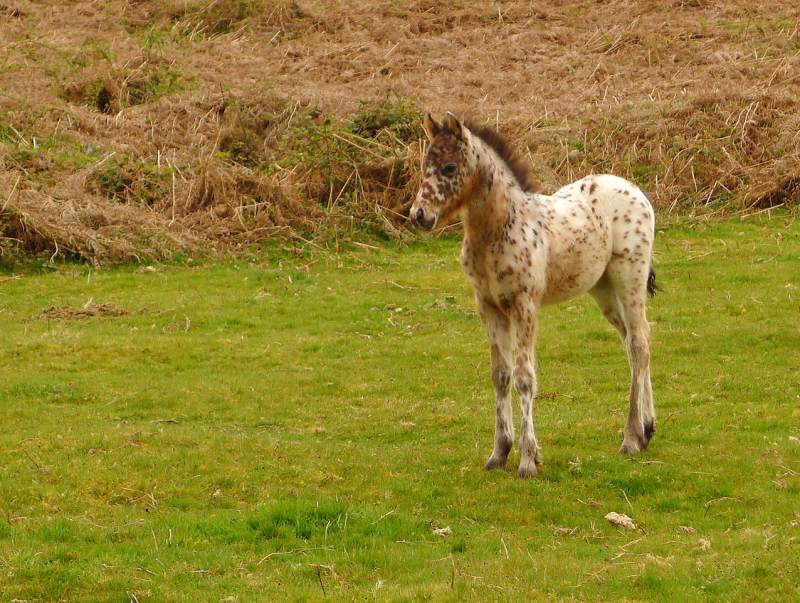 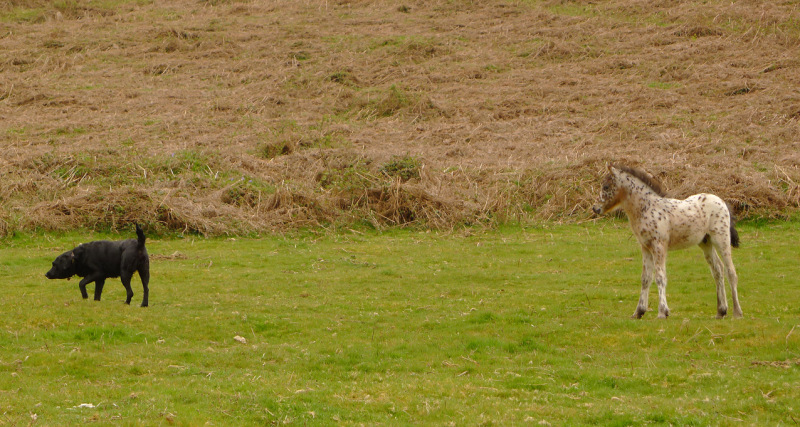 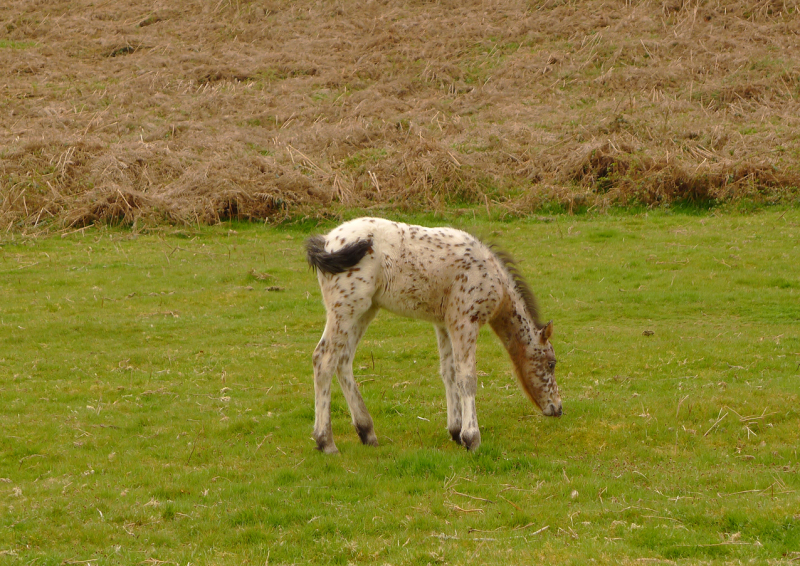 "The belief that meaningful speech is a purely human property was entirely alien to those oral communities that first evolves our various ways of speaking, and by holding to such a belief today we may well be inhibiting the spontaneous activity of language. By denying that birds and other animals have their own styles of speech, by insisting that the river has no real voice and that the ground itself is mute, we stifle our direct experience. We cut ourselves off from the deep meanings of many of our words, severing our language from that which supports and sustains it.

"We wonder then why we are so often unable to communicate even among ourselves." 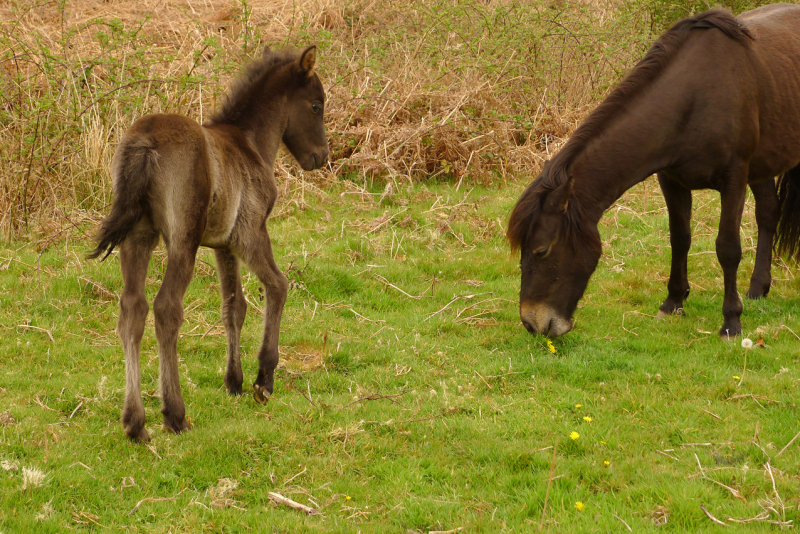 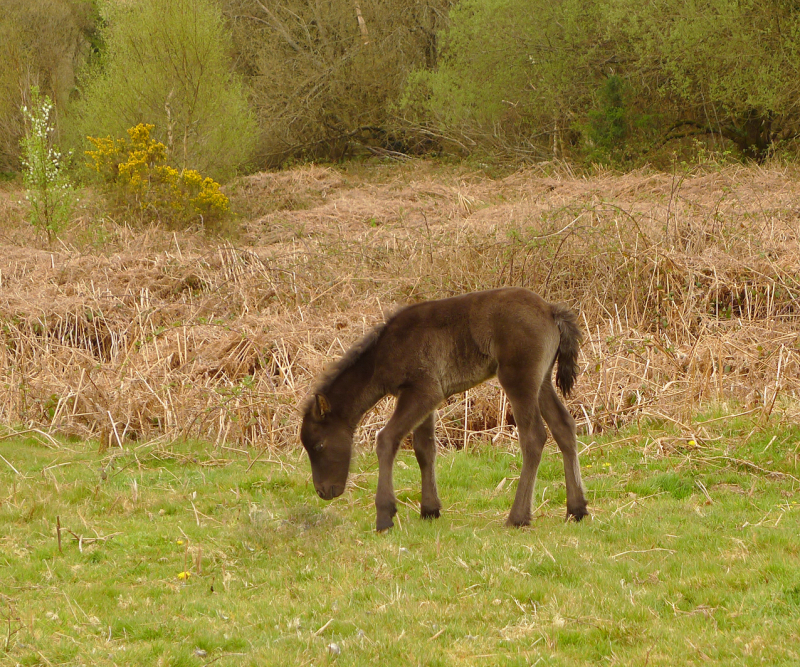 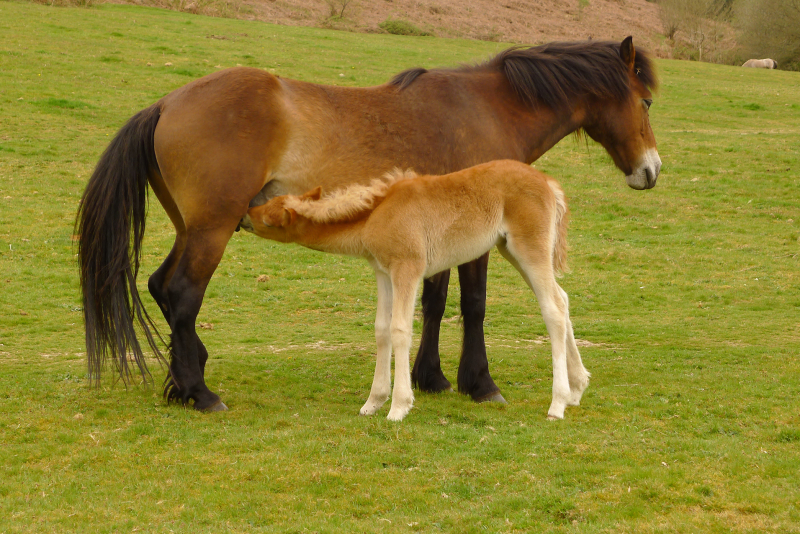 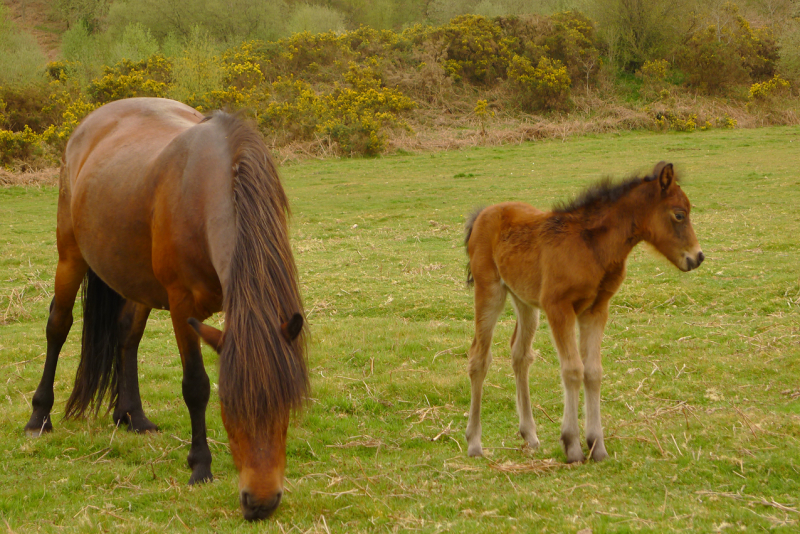 The pictures today are of our local Dartmoor pony herd and their newborn foals. (The last time I posted pony photos here, the mares were still pregnant.) These semi-wild ponies travel between the hills of Chagford (full of tender green grass for grazing) and the open moor; the sheltered slope of our village Commons is where they come to give birth each year. It's been a good season for the ponies: we've counted ten new foals in all. I watch the movement of the herd across the valley from the windows of my hillside studio, and the hound and I make daily visits to the Commons to check on the foals' progress. They are exquisite. 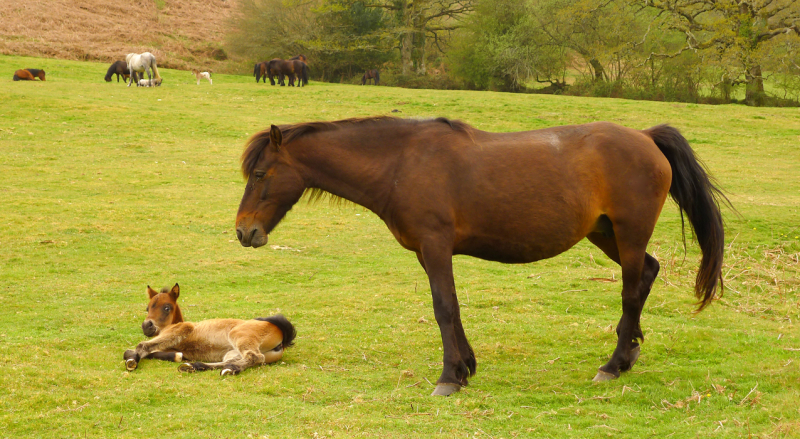 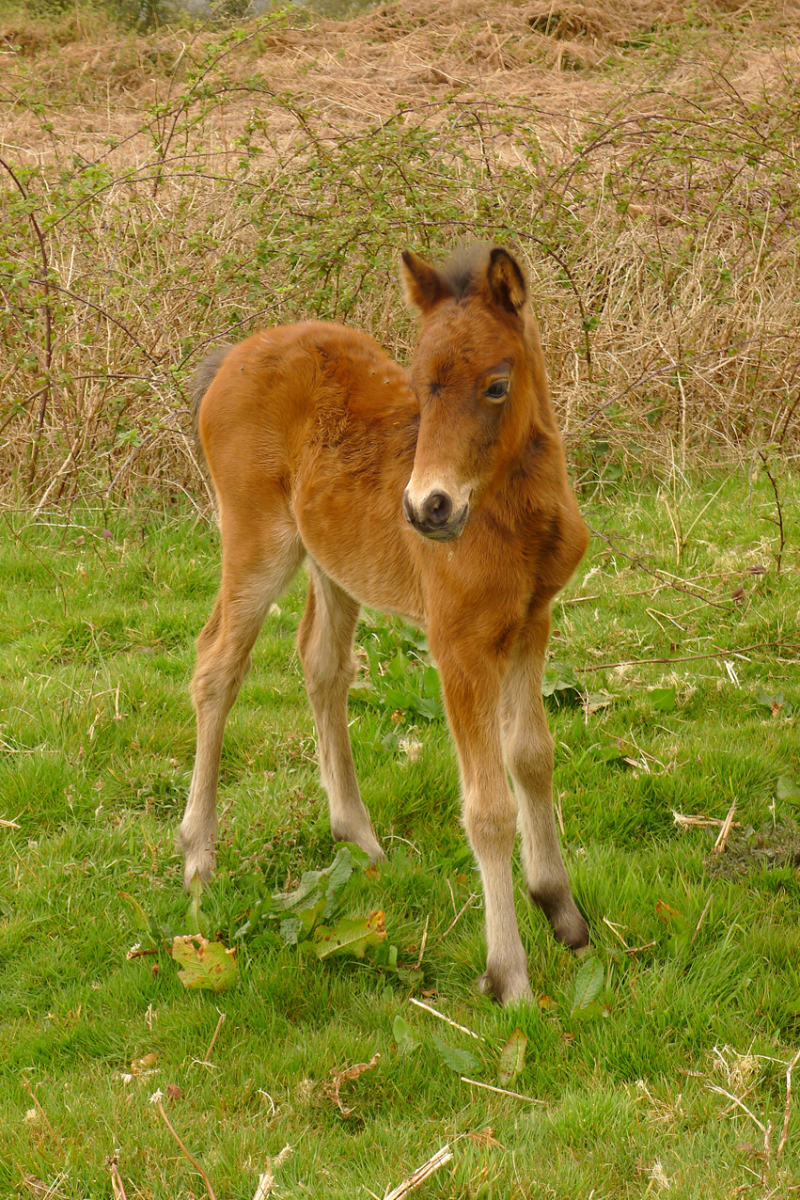 Words: The passage above is from The Spell of the Sensuous by David Abram (Vintage, 1996). The poem in the picture captions, "A Blessing" by James Wright, is from Above the River: The Complete Poems & Selected Prose (Wesleyan University Press, 1990). All rights reserved by the authors. Pictures: Photographs of the new crop of foals on the village Commons, taken shortly after they were born, earlier this spring. More recent photos to follow.

Related posts: Living in a storied world, Animalness, Relationship & reciprocity, and The speech of animals.

Once again, I have something new to ponder and reflect on after reading your blog. Thank you!

Yesterday I felt like everything outside was talking to me. The wind was ruffling the grass and flowers. What was outside was also inside me, waving and dancing. It was all conscious and better than any language.

A beautiful and timely post, Terri. I am enchanted by the ponies and the poem in the picture captions has slayed me.

Thank you for this post. Have you read the book Wisdom Sits in Places: Landscape and Language Among the Western Apache by Keith H. Basso? I think you would find it interesting.

Isn't that James Wright poem lovely? It's one of my favourites.

Yes, I read it years ago, when I was living in Apache country in Arizona. It's a truly wonderful book. David discusses it in Spell of Sensuous too.

Hi Terri, I've been meaning to add a comment and thank you so many mornings when I 'drop by' your site ... it's usually when I arrive at work (cambridge ma) and am sipping my first cup of coffee and am soon distracted. Anyway, your gorgeous photos (these horses and foals are exquisite and so dear) and your words, thoughts, promptings are balm for my being in this crazy world. So, thank you!!

so beautiful and thank you (((Terri)))

Sara and Mo: You're welcome. It's such a pleasure to share these delightful foals...and I have more photos that I'll post in the days ahead.

I still remember the import of this book although it's been at least 15 years since I read it. Words have meaning in so many ways.

Very interesting site. Is it possible to subscribe to the blog, to receive it by email, please?