The community of the forest
Tunes for a Monday Morning

When you enter the woods... 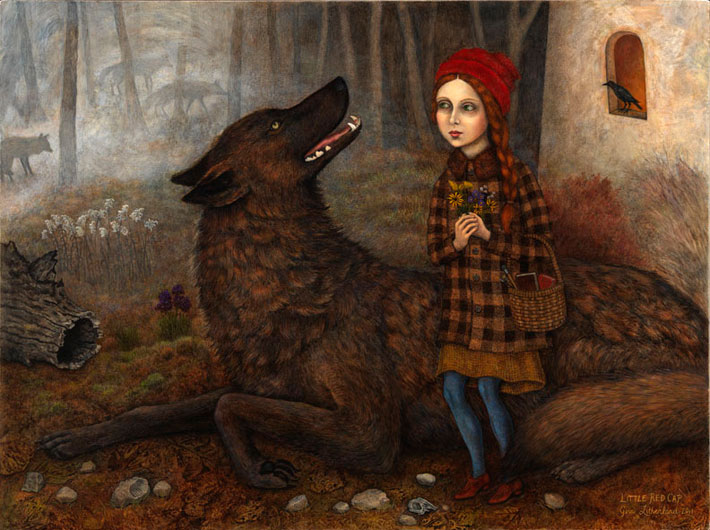 "When you enter the woods of a fairy tale, it is night and trees tower on either side of the path. They loom large because everything in the world of fairy tales is blown out of proportion. If the owl shouts, the otherwise deathly silence magnifies its call. The tasks you are given to do (by the witch, by the stepmother, by the wise old woman) are insurmountable -- pull a single hair from the crescent moon bear's throat; separate a bowl's worth of poppy seeds from a pile of dirt. The forest seems endless. But when you do reach the daylight, triumphantly carrying the particular hair or having outwitted the wolf; when the owl is once again a shy bird and the trees only a lush canopy filtering the sun, the world is forever changed for your having seen it otherwise.

"From now on, when you come upon darkness, you'll know it has dimension. You'll know how closely poppy seeds and dirt resemble each other. The forest will be just another story that has absorbed you, taken you through its paces, then cast you out and sent you back home again."

- Elizabeth J. Andrew (On the Threshold) 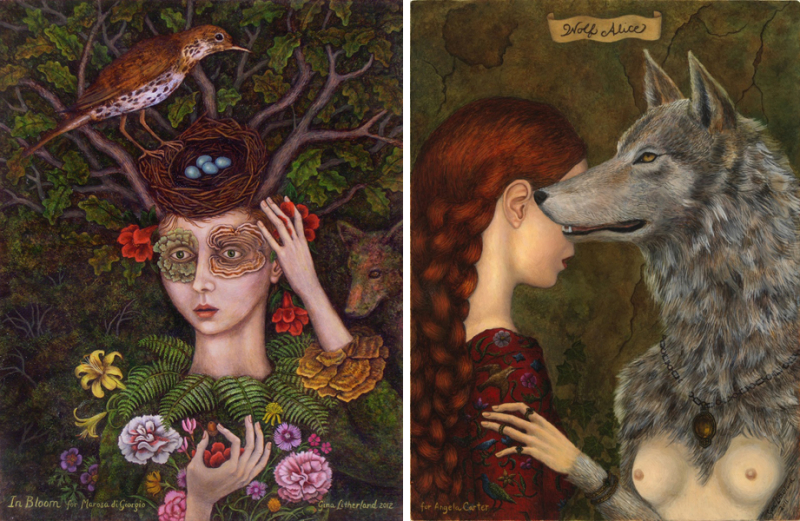 "Step across the boundary and the trespass of story will begin. The forest takes a deep breath and through its whispering leaves an incipient adventure unfurls. The quest. In the lull -- not the drowsy lull of a lullaby but the sotto voce of a woodland clearing, scented with story as it is with with wild garlic -- this is the moment of beginning, the pause on the threshold before the journey. So many tales begin here, hard by a great forest...."

- Jay Griffiths (Kith: The Riddle of the Childscape) 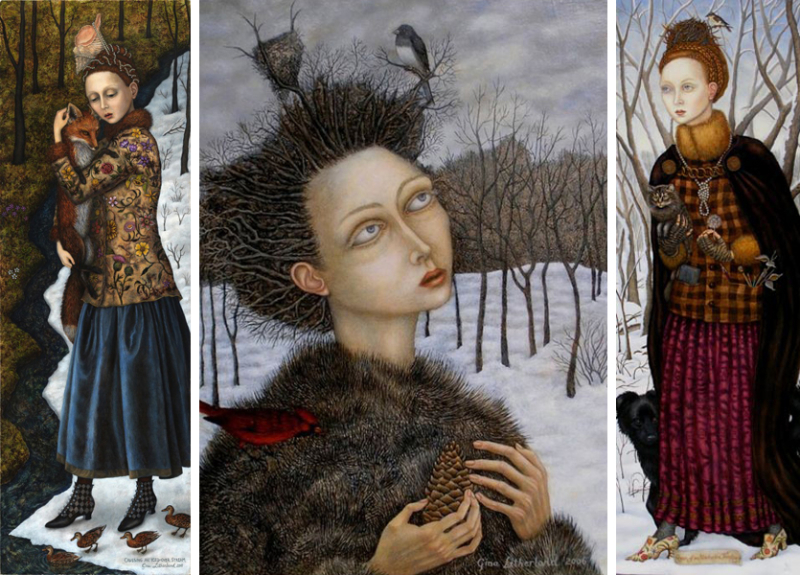 "I did not want to think about people. I wanted the trees, the scents and colors, the shifting shadows of the wood, which spoke a language I understood. I wished I could simply disappear in it, live like a bird or a fox through the winter, and leave the things I had glimpsed to resolve themselves without me." 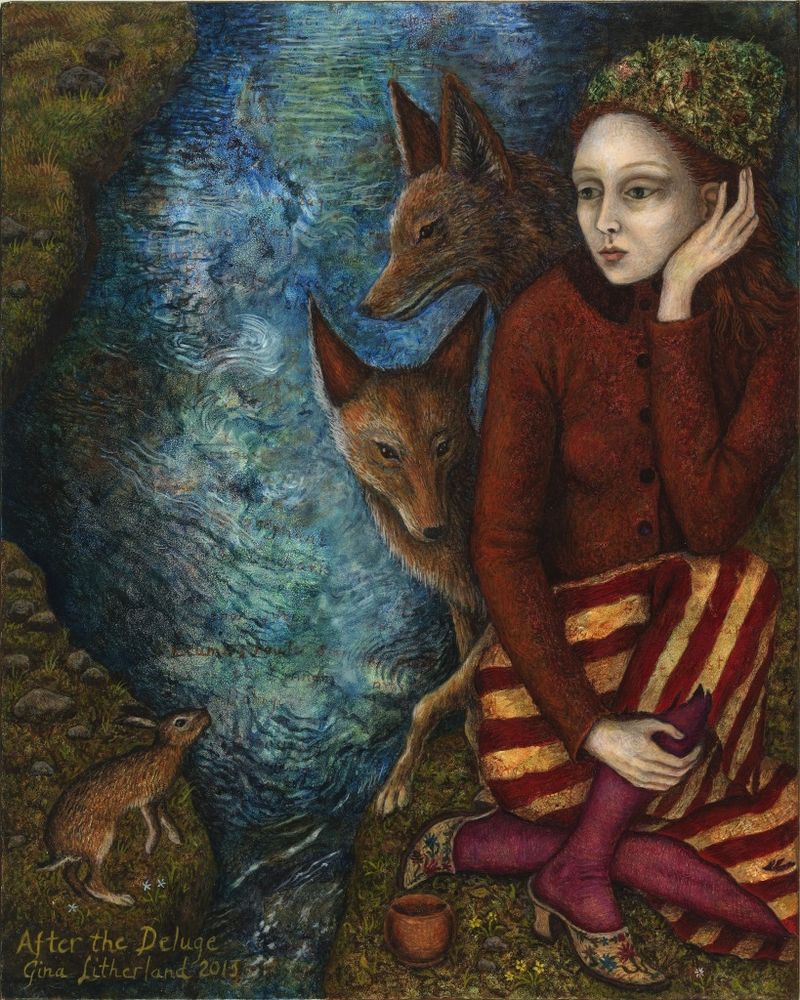 "It’s not by accident that people talk of a state of confusion as not being able to see the wood for the trees, or of being out of the woods when some crisis is surmounted. It is a place of loss, confusion, terror and anger, a place where you can, like Dante, find yourself going down into Hell. But if it’s any comfort, the dark wood isn’t just that. It’s also a place of opportunity and adventure. It is the place in which fortunes can be reversed, hearts mended, hopes reborn."

- Amanda Craig (In a Dark Wood) 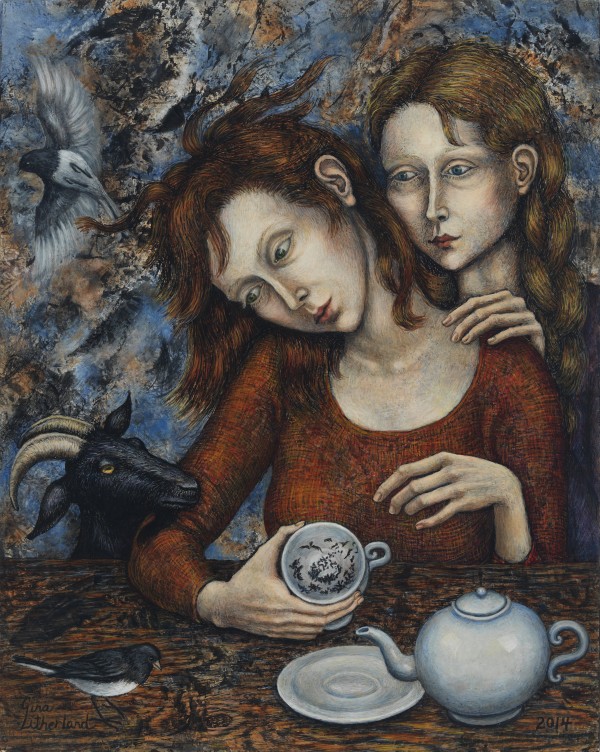 -  Catherynne M. Valente (The Bread We Eat in Dreams) 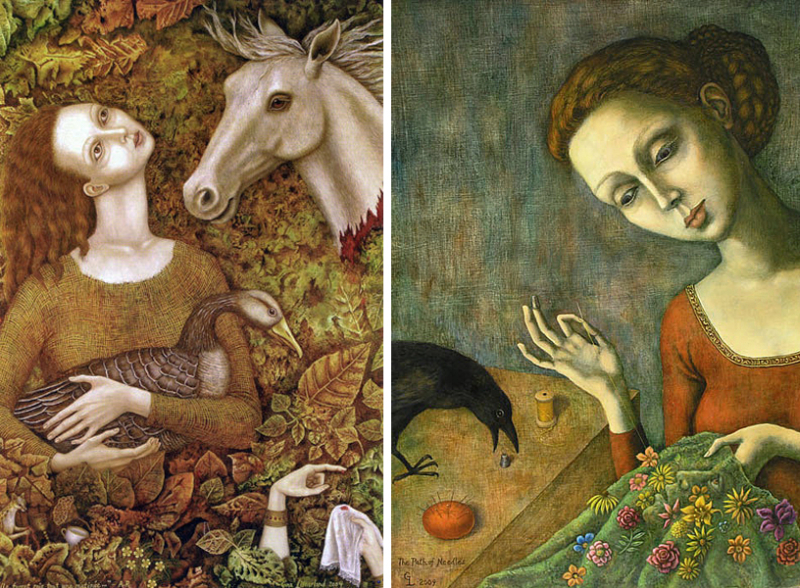 "What if we turned the old nursery rhymes and fairytales we all know into feral creatures once again, set them loose in new lands to root through the acorn fall of oak trees? What else is there to do, if we want to keep any of the wildness of the world, and of ourselves?" 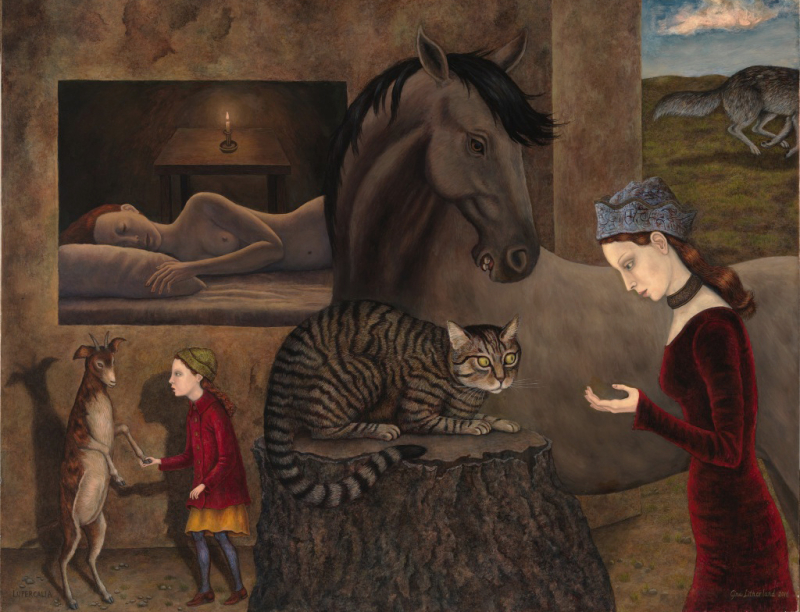 The fairy-tale-infused art today is by American painter Gina Litherland. Born in Gary, Indiana, she received a BFA from the School of the Art Institute of Chicago in 1984, and has exhibited in museums and galleries throughout the United States. 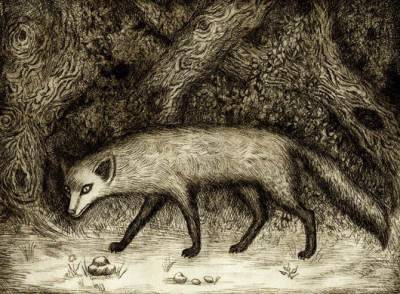 "I have always been interested in the interplay between myth, the natural world, and the domain of dreams and memory," she says. "As a child, I spent many hours exploring natural wooded areas and empty lots inhabited by multitudes of insects and wildlife. This, along with a fervent interest in reading, particularly fairy tales, laid the foundation for my current investigations as an artist. Much of my work is inspired by folklore, myth, and literature reflected in my own personal preoccupations, specifically themes of desire, femaleness, the natural world, the human/animal boundary, children's games, ritual, intuition, and memory. The painting techniques that I use, traditional indirect oil painting techniques similar to those used by fifteenth century Sienese painters, combined with textural effects created by using various tools other than the paint brush, allow me to create a detailed, layered, and complex surface of images recreating the experience of looking at the forest floor with its rich blanket of diverse matter in various stages of decay. Suddenly, an object emerges and comes sharply into focus."

Go here to read an interview with the artist by Don LeCoss, and here to see her work in the "Hidden Rooms" show at Corbett vs. Dempsey in Chicago, 2016. 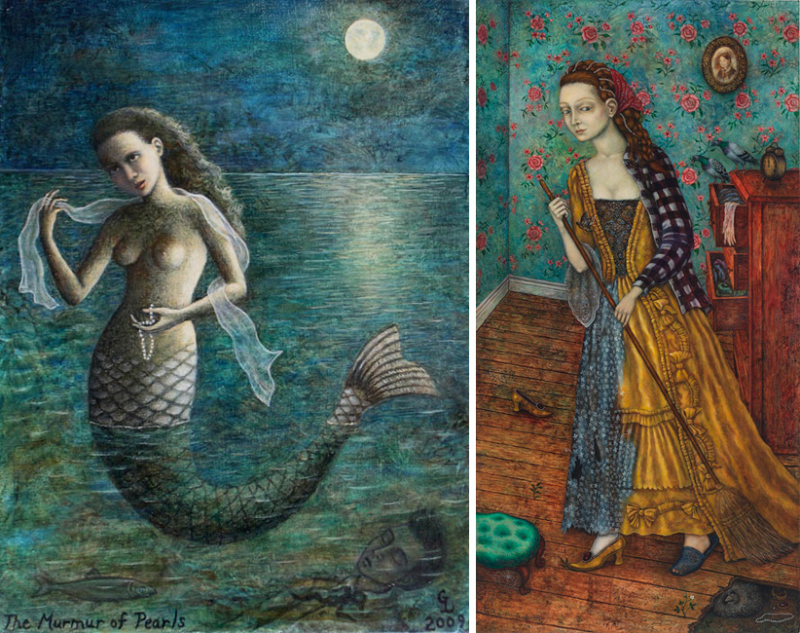 The art by Gina Litherland is: Little Red Cap, In Bloom, Wolf Alice (inspired by an Angela Carter story), Crossing an Iced-over Stream, a wintery figure (title unknown), Queen of An Uncharted Territory,  After the Deluge, Reading the Leaves, Goose Girl, The Path of Needles, Lupercalia, fox drawing, Murmur of Pearls, Housekeeping, and Bird Funeral. All rights to the text and art above reserved by the authors and artist.

in From the archives | Permalink | Comments (8)

This week's blog on the life, habits and character of trees has been breathtaking to say the least. I was entranced with not only the gorgeous photos but the excerpts from the novels and the other writers. I have always felt a closeness with the woods and especially certain kinds of trees. Back home in New York, it was the apple, the chestnut, birch and pine. Here in the high desert, it is the Palo Verde, the Joshua and the desert pine. I think all of us who connect to nature, feel that deep sense of mystery and power that is associated with plants and trees. They are guardians of the forest, gatekeepers to dreams, and places of sanctuary for the wild creatures that inhabit them.

Even when living in an urban setting, there is a need to reconnect with the green world and its spiritual sense of power --whether it be healing, a sense of calm or the need to remember the beauty of our roots, our sense of wildness. Lately, I have been reading about "hedge witches" and "urban witches" and their continual quest to understand the healing and magical properties of that other world, the forest, woods, nature whatever you wish to call it. Also, its sense of transformation and the natural bridges or links it offers through certain creatures that exist in or visit both worlds. Much of the information, spells/prayers/wisdom etc.. they inherit comes from their own ancestors who practiced the craft and passed it on from one generation to another. Others learn by an inner calling to explore and risk the boundaries of their everyday experience by opening their minds to an inventive if not wild imagination. This fascinates me and while reading this quote from Wednesday's blog by Barbara Kingsolver

"And for all that, trees are things to us, good for tables, floors and ceiling beams: As much as we might admire them, we’re still happy to walk on their hearts. It may register as a shock, then, that trees have lives..."

I was inspired to finish a poem I was working on about an apprentice/urban witch who learns to recognize not only how her identity evolved; but also through the intervention of a fox ( who suddenly appeared in her citified world) that even the stone and wood objects around her still retain the memory of their natural origins. How the secrets of their once, primal landscape echo throughout their re-shaped purpose and composition.

Mist hangs over the river
as I clip herbs on the terrace,
a garden of window boxes, and ask the moon
for her support.

Her face is half-veiled
by darkness as she stares
at the city's skyline and listens
to the bone song of old
buildings echoing their stories
through the Autumn dusk.

Brick, granite, brownstone--
my ancestors lived
in all three kinds
hungering for the night
so they could stir their potions
and induce dreams
that would transport them elsewhere

while their neighbors went to sleep
hearing carriage wheels roll
over cobblestones -- and watched
a street lamp flare. Its flame glittering
within the glass cocoon
like a Luna moth.

A thought left by my sisters
who manipulated place and time.
They learned early how to bind
themselves to the spirit of plants
and the intuition of stars
from virgin to swan.

I 'm still learning how
to turn off my phone, focus
on what the sheer stillness
can invoke --

a deep breath, a glance
at plant troughs, ceiling beams or floors,
the slate tiles on roof
and courtyard walk -- where a fox
comes from her unseen lair
telling me how they still haunt (ingrained)
with secrets from her world of trees and rocks,

Again, thank you so much for these fabulous essays and perspectives. They truly enrich and inspire us.

Lovely, Terri, you have made a refuge for the soul.

He's just a stop-action figure,
a herring, red or otherwise,
put there for you to stumble upon,
gratuitous transition-maker.
You do not have to outwit him,
only outlast him.
Note how tatty his fur is,
how he scratches viciously
at his meager chest.
How even the fleas
have begun to desert him.

Think he is the enemy?
Think again.
He is a puppet in the hands
of a magic teller.
He is a presumed nemesis,
a shadow of a shadow,
no realer than Punch,
with teeth of cardboard.
He can not hurt you
unless you let him.

Cut the the rope that binds you,
that umbilical the story
has tied to your ankle,
an anchor of tradition.
Rise up, leave.
He can not catch you,
he can only follow,
but like the shadow he is,
he will not be able
to eat you up.

A Me Too moment artfully wrapped around mist, moon, skylight, virgin, swan.

Absolutely a great title followed by a great poem! Indeed, the wolf, creature of fear, predator of the unsettled, the timid, the unsure, is only as menacing as we or they allow him to be. His terrorizing presence is rather illusionary when measured against our human ability to reason, outwit and resolve dilemmas and difficult situations. These lines define his truthful ability to threaten every skillfully, precise and clever --

He is a puppet in the hands
of a magic teller.
He is a presumed nemesis,
a shadow of a shadow,
no realer than Punch,
with teeth of cardboard.
He can not hurt you
unless you let him.

Thank you for sharing,
much enjoyed this one!
Wendy

I really like the way you summed up this poem of mine and appreciate the advice on where to send out some more poems. As always, your input and counsel are very much appreciated and valued!!

Again, many thanks
Take care,
Wendy

I loved your post and your choice of art in the post. If you are enchanted by the mysteries of ancient forests then I wonder whether you have ever paid a vist to Puzzlwood in the Forest of Dean?