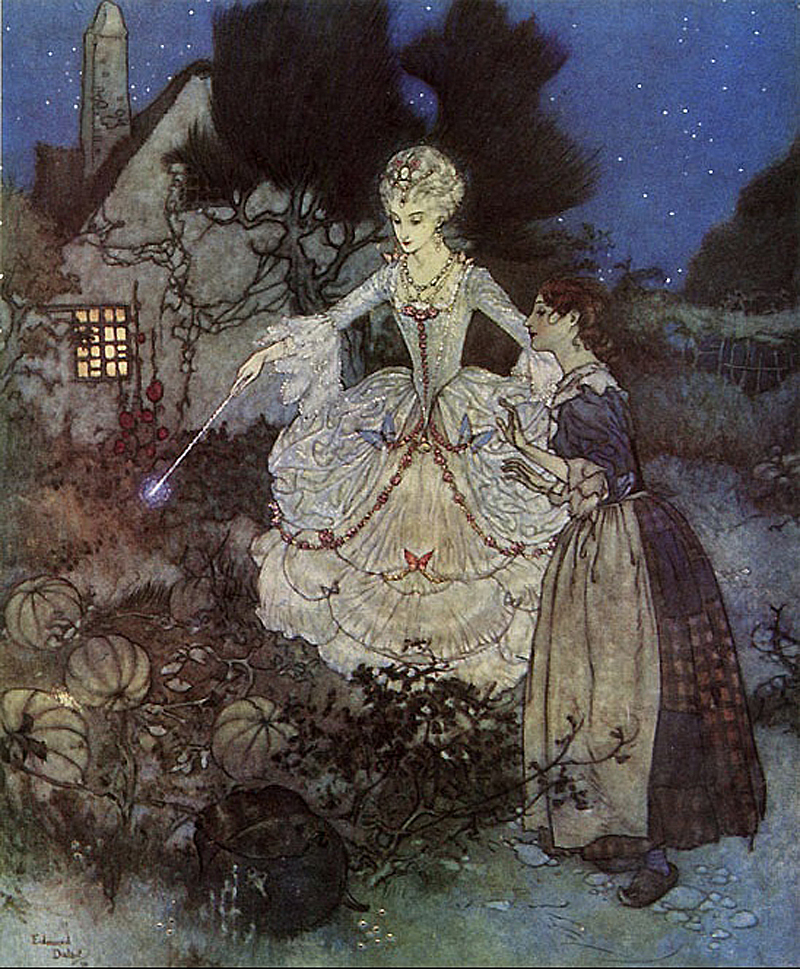 In her seminal collection Touch Magic: Fantasy, Faerie & Folklore in the Literature of Chilhood, Jane Yolen discusses the "changeling life" of fairy tales as they travel from teller to teller, country to country, and century to century. Here she reflects on Cinderella in her various guises: 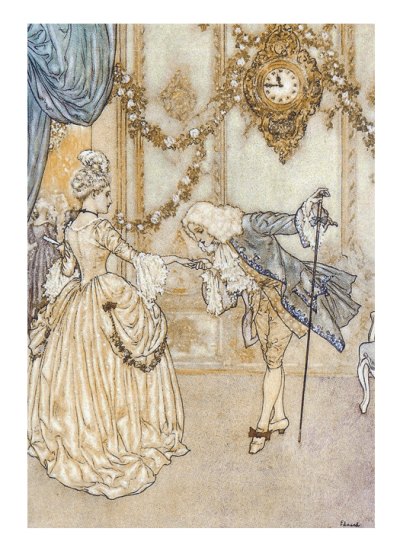 "The story of Cinderella has endured for over a thousand years, first surfacing in a literary source in 9th-century China. It has since been found from the Orient to the interior of South America, and over five hundred variants have been located by folklorists in Europe alone. This best-loved tale has been brought to life  over and over so many times, no one can say for sure where the oral tale truly began. But as Joseph Jacobs, the indefatigable Victorian collector, once said of a Cinderella story he printed, it was 'an English version of an Italian adaptation of a Spanish translation of a Latin version of a Hebrew translation of an Arabic translation of an Indian original.' That is certainly an accurate statement of the hazards of folk-tale attributing: each reteller has brought to a tale something of his or her cultural orientation. The Chinese admiration for the tiny 'lotus foot' is preserved in the Cinderella tale, as is the 17th century European preoccupation with dressing for the ball.

"But beyond the cultural accoutrements, the detritus of centuries, Cinderella speaks to all of us in whatever skin we inhabit: the child mistreated, a princess or highborn lady in disguise bearing her trials with patience, fortitude, and determination. Cinderella makes intelligent decisions, for she knows that wishing solves nothing without the concomitant action. We have each of us been that child. (Even boys and men share that dream, as evidenced by the many Ash-boy variants.) It is the longing of any youngster sent supperless to bed or given less than a full share at Christmas. And of course it is the adolescent dream. 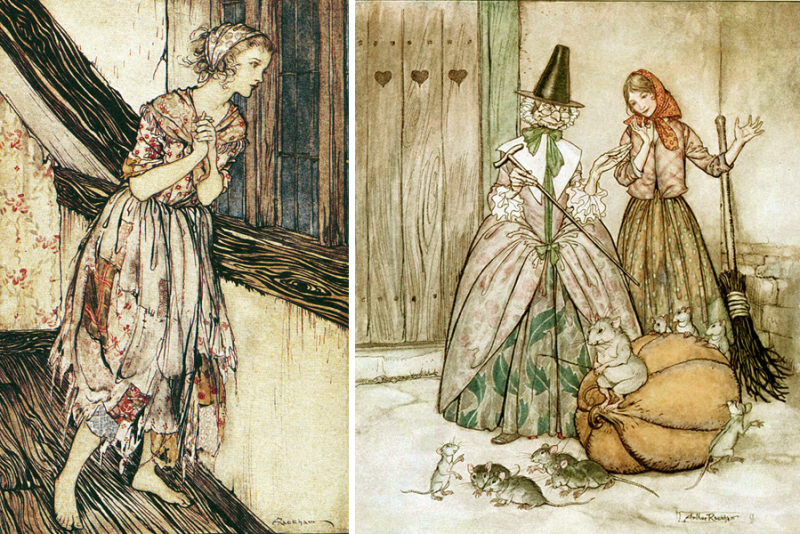 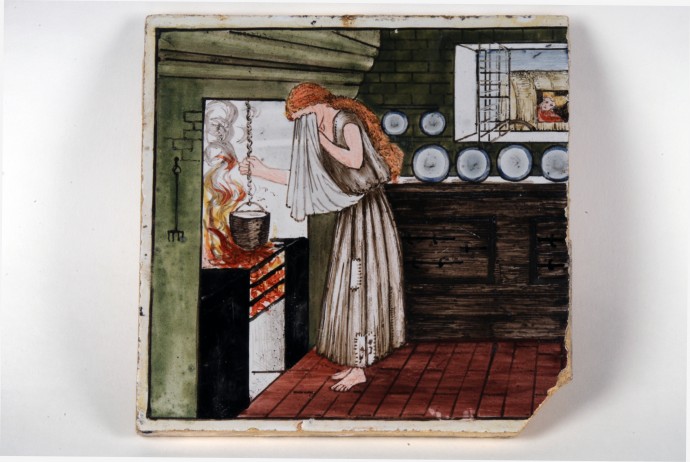 "To make Cinderella less than she is, an ill-treated but passive princess awaiting rescue, cheapens our most cherished dreams and makes mockery of the magic inside us all -- the ability to change our own lives, the ability to control our own destinies. 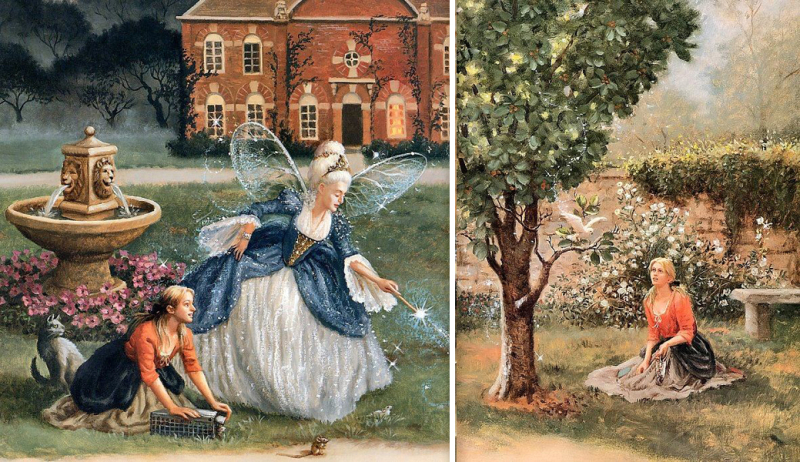 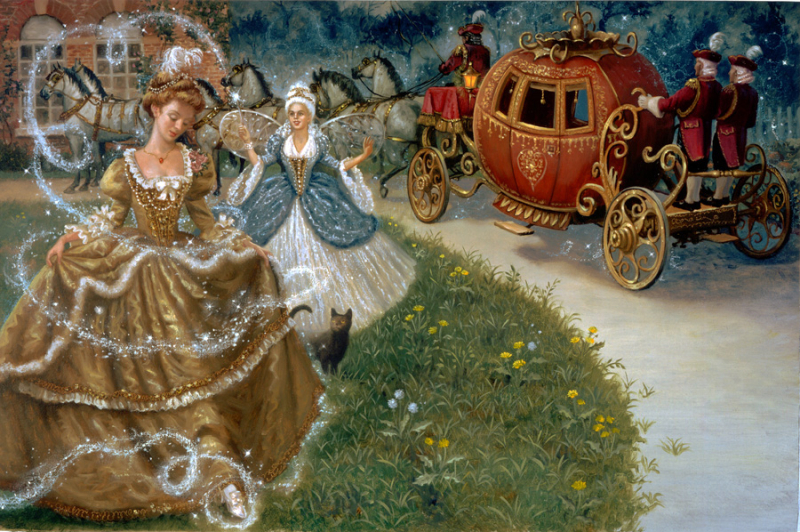 "In the oldest of the Cinderella variants, the heroine is hardly catatonic. In the Grimm 'Cinder-Maid,' though she weeps, she continues to perform the proper rites and rituals at her mother's grave, instructing the birds who roost there in the way to help her get to the ball. In 'The Dirty Shepherdess' variant and 'Cap  o' Rushes' from France, '...she dried her eyes, and made a bundle of her jewels and her best dresses and hurriedly left the castle where she was born.' Off  she goes to make her own life, working first as a maid in the kitchen and sneaking off to see the master's son. Even in Perrault's 17th-century 'Cendrillon, or The Little Glass Slipper,' when the fairy godmother runs out of ideas for enchantment, and was at a loss for a coachman, 'I'll go and see,' says Cendrillon, 'if there be never a rat in the rat-trap, we'll make a coach-man of him.' 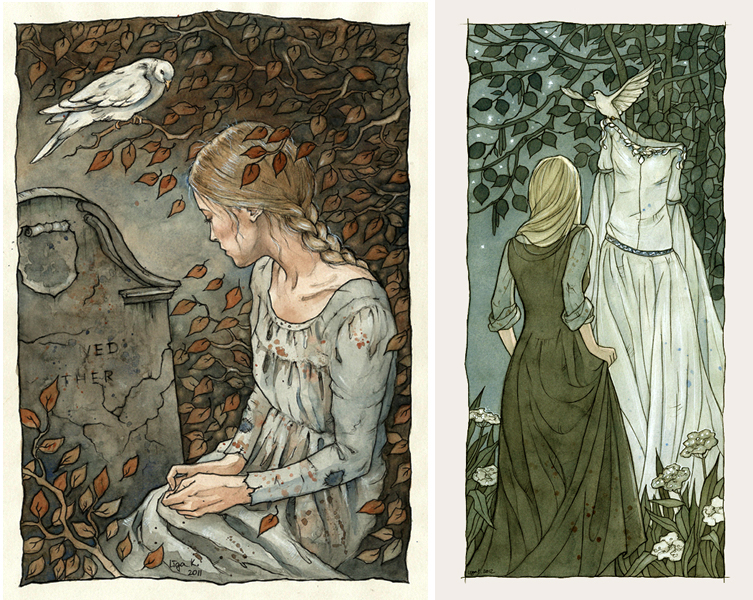 "The older Cinderella is no namby-pamby forgiving heroine. Like Chesterton's children, who believe themselves innocent and demand justice -- unlike adults who know themselves guilty and look for mercy -- Cinderella believes in justice. In 'Rushen Coatie' and 'The Cinder-Maid,' the elder sisters hack off their toes in order to try and fit the tiny shoe, and Cinderella never stops them. Her telltale birds warn the prince:

"Does Cinderella comfort her maimed sisters? Nary a word. And, in the least bowdlerized of the German and Nordic variants, when the two sisters attend the wedding of Cinderella and the prince, 'the elder was at the right side and the younger at the left, and the pigeons pecked out one eye from each of them.' Did Cinderella stop the carnage -- or the wedding? There is never a misstep between that sentence and the next. 'Afterwards, as they came back, the elder was on the left, and the younger on the right, and then the pigeons pecked out the other eye from each. And thus, for their wickeness and falsehood, they were punished with blindess all their days.' 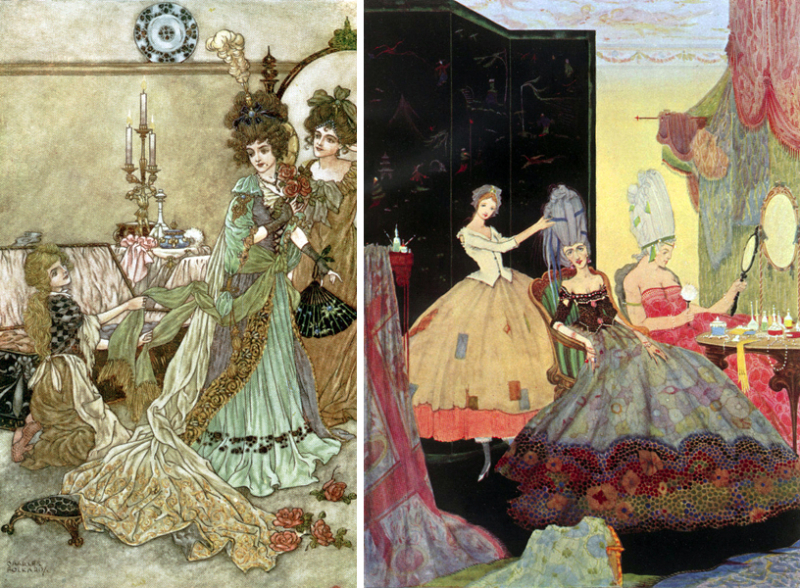 "Of course, all this went into the Walt Disney blender and came out emotional pap. In 1950, when the movie Cinderella burst onto the American scene, the Disney studios were going through a particularly trying time. Disney had been deserted by the intellectuals who had championed his art for some time. Because of World War II, the public had been more interested in war films than cartoons. But with the release of Cinderella, the Disney studios made a fortune, grossing $4.247 million in the first release alone. It set a new pattern for Cinderella: a helpless, hapless, pitiable, useless heroine who has to be saved time and time again by the talking mice and birds because she is 'off in a world of dreams.' It is a Cinderella who is not recognized by her prince until she is magically back in her ball gown, beribboned and bejeweled. 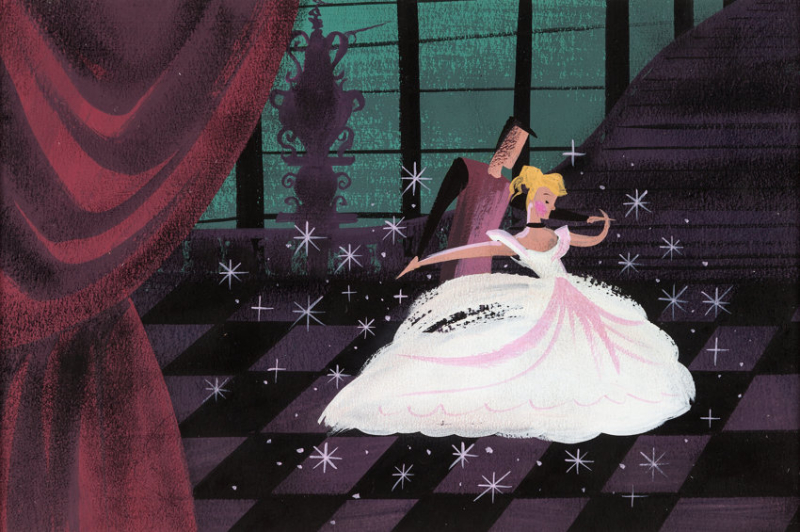 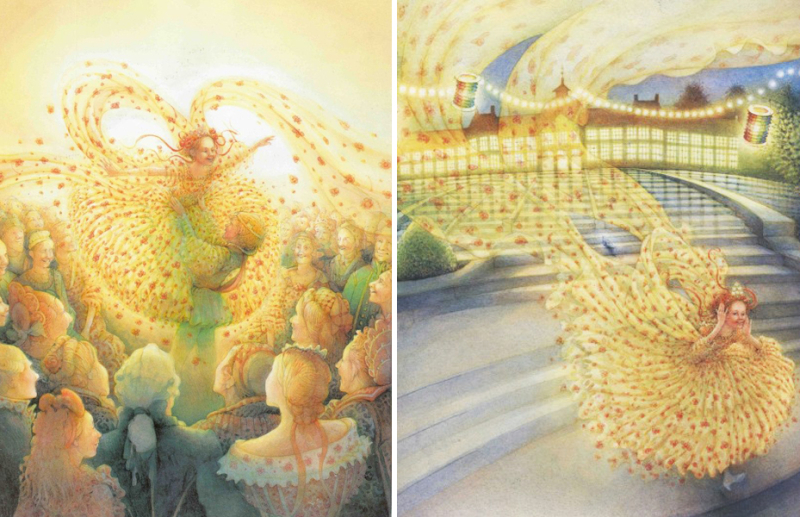 "Poor Cinderella. Poor us. The acculturation of millions of boys and girls to this passive Cinderella robs the old tale of its invigorating magic. The story has been falsified and the true meaning lost -- perhaps forever." 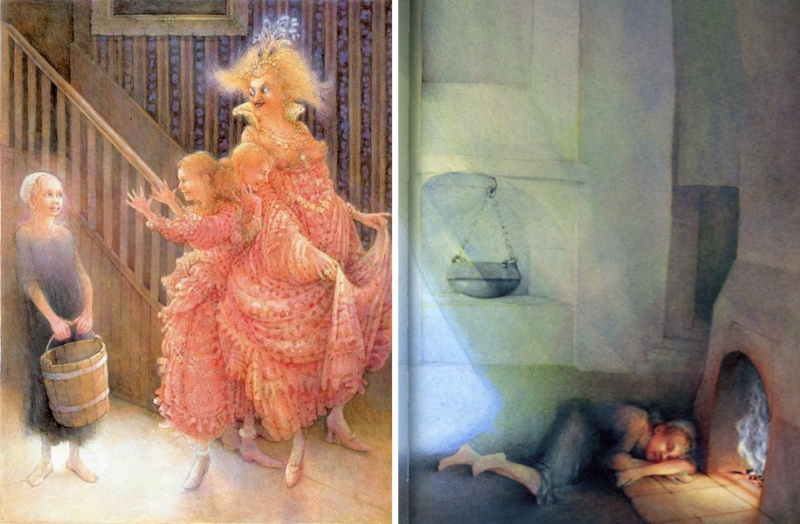 If you'd like to know more about the history of Cinderella and it's many variants, my essay on the subject is online here: Cinderella: Ashes, Blood, and the Slipper of Glass. 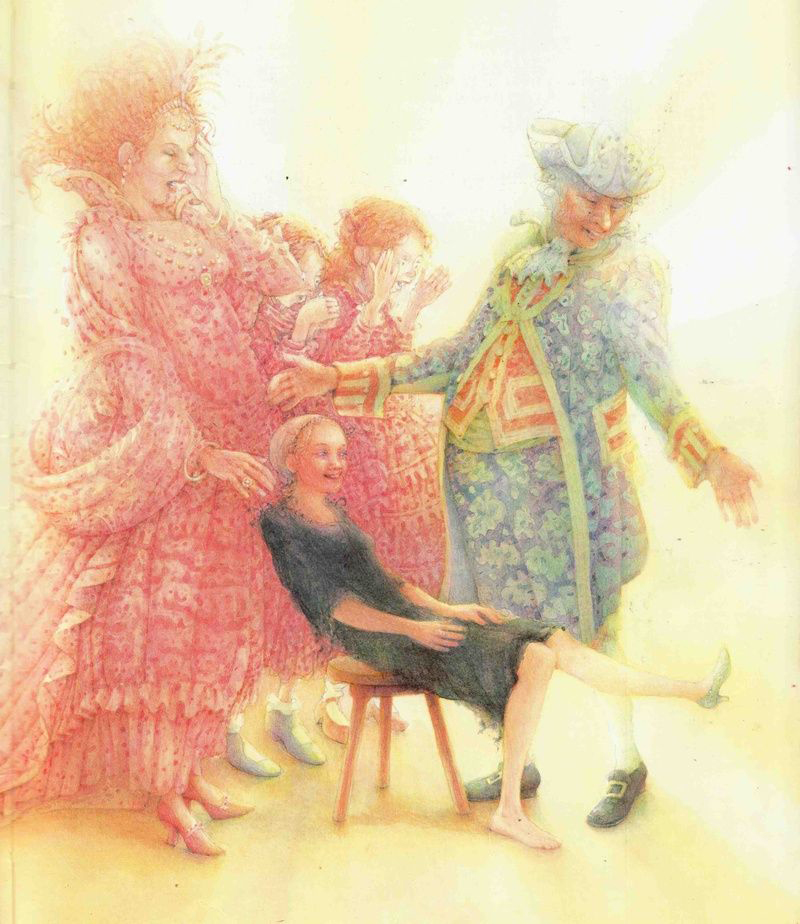 Pictures: The Cinderella art above is by Edmund Dulac, Arthur Rackham, Edward Coley Burne-Jones, Ruth Sanderson, Liiga Klavina, Jennie Harbour, Charles Folkard, Harry Clarke, Mary Blair, and Loek Hoopmans. Each image is identified in the picture captions. (Hold your cursor over the pictures to see them.) Words: The passage above from "Once Upon a Time" by Jane Yolen, published in Touch Magic: Fantasy, Faerie & Folklore in the Literature of Childhood (Philomel, 2981; August House, 2000), which I highly recommend. All rights to the text above are reserved by the author and artists.

Diseny did be-saccharine the fairytales into vanilla pablum for the consumption of "the children" - but I was a child who grew up on the original Grimm and Andersen. I also had a dose of the Disney Princess movies and I do have a soft spot for some bits of some of them - but mostly as I grew older they became sickeningly sweet and tiresome, and oddly annoying (the pink! blue! dress controversy at the end of Aurora's story while the tiny fairy godmothers squabble over it... the thing makes some people smile fondly and I just want to smack them all with a rolled up newspaper and tell them to quit it...). And it all broke for me when The Little Mermaid was made - because I LOVE Andersen's original story and there's little left of it here. (given the current brouahaha over that I have to underline that it has always mattered to me far less what the Little Mermaid physically looked like than what she carried inside of her and the Disney version, no matter what her outside varnish was, simply failed to carry that weight for me. it was FLUFF. and I hated it that they fluffified that story...)

I read the original gory versions of Cinders. I have to admit I liked the soul of that girl far more than I cared for the Disney dreamer - despite the visual eye candy of bibbidi bobbidy boo and all that. I've always looked for substance over style, yes, even as a kid, even in my fairy tales.I sometimes think that children raised on the older grittier versions of the tales probably stand a batter chance out in the real world...

I actually find the Disney animated Cinderella to be an interesting mix of both the German and French versions. She has animal helpers to show her closeness to nature, as well as her industry (she made them clothes) and kindness. She attempts to fix her birth mother's old dress, but is kept occupied by her step-mother/sisters with endless work. The animals help her, altering the old dress into something more fashionable (mirroring Cinderella getting a dress from the tree planted on her mother's grave or in various versions, from animals clearly meant to represent a mother's love).

Far from being the solution to the problem, her step-sisters destroy her dress. Demoralized, she runs into the garden where the French version takes over and another mother substitute, her fairy god-mother shows up.

Throughout the film, she's patient with her stepmother/sisters, though she clearly displays mild exasperation with them.

The newer live action Cinderella does great damage to her character. She shows no irritation and is a complete doormat on a level I didn't know was possible in a modern film.

The Disney versions aside- my favorite film version is The Glass Slipper, starring Leslie Caron. Not only was she brunette, she was often rebellious. Her god-mother was possibly a fairy, but also quite possibly a thief. I still enjoy the animated Disney version, but I'd rather watch Leslie Caron raise hell and dance on a giant cake any day.

I too enjoyed the Leslie Caron film more than the Disney version, but then I deeply dislike Disney's. My reasons why are in this essay:

Disney is in my black books for gutting and infantilizing everything he touched -- Alice, Pooh, Sleeping Beauty, Cinderella, and Mary Poppins, to name the worst offenders. He has much to answer for what he's done to the psyches of millions of American girls.

That is an excellent version and a favorite of mine. "Windowsill."

Another great version is "More than a miracle" with Sophia Loren and Omar Shariff. Not an exact version and the prince is a bit abusive and Cinderella is a bit of a B but a really interesting take. Plus Sophia and Omar in period late Renaissance clothing.

If I want something really off, there's always Cinderfella with Jerry Lewis.

The worst by far was The Little Mermaid.

I avoided the Cajun version of The Frog Prince because of what they had done to The Little Mermaid.

I can think of plenty of fairy tales they could do but I shudder to think how awful they would be "Disneyfied."

They seem to have lost steam or interest in doing full length animated fairy tales any more. Or they're just too cheap. Now they're converting all of them to live action. Gee, anyone can do that. Disney used to be on the cutting edge of animation. Pretty soon they'll be like Sears, once a leader and having failed to keep up with the times and technology, falling behind and eventually losing the market. Will they ever be bankrupt? Probably not in my lifetime. But will they dominate film animation? Nope. Not even owning Pixar will save them. They'll have their vault of past glory and aging amusement parks that more and more people won't be able to afford to go to. They'll start to shrink. With cable, NetFlix, Hulu, etc. not even owning a major network will save them.