Spells and tunes for a Monday Morning
The stories we live

The stories we choose 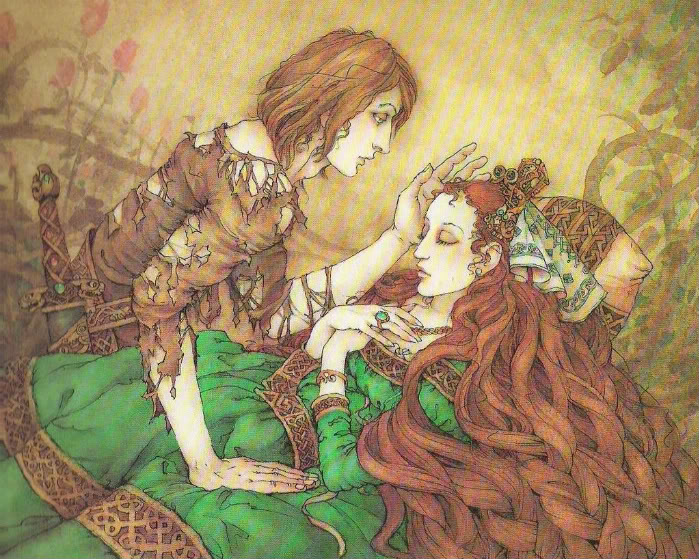 From "Sharpening an Imagination With the Hard Flint of a Fairy Tale" by Alice Hoffman (author of Practical Magic, Second Nature, The Story Sisters, etc.):

"I read fairy tales early on. They terrified, delighted, disgusted and amazed me. They were far more grown-up than any other children's books I read, scarily so at times. Like most children, I could feel the disturbing aspects of the stories even if I couldn't intellectually understand or articulate their underlying meanings. Still, I knew. I shivered. I thrilled to them. I learned. Everything in them rang true: the unspoken sexuality (a woman loves a beast, a girl is nearly eaten by a wolf, a frog wishes to be the husband of a princess), the violence (bad mothers, absent fathers, foul murders), the greed (the house of candy, the cage of gold). 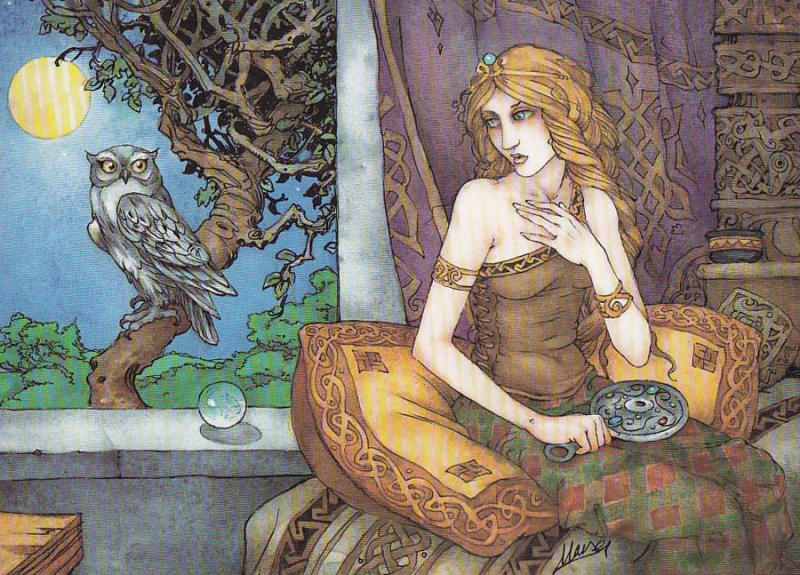 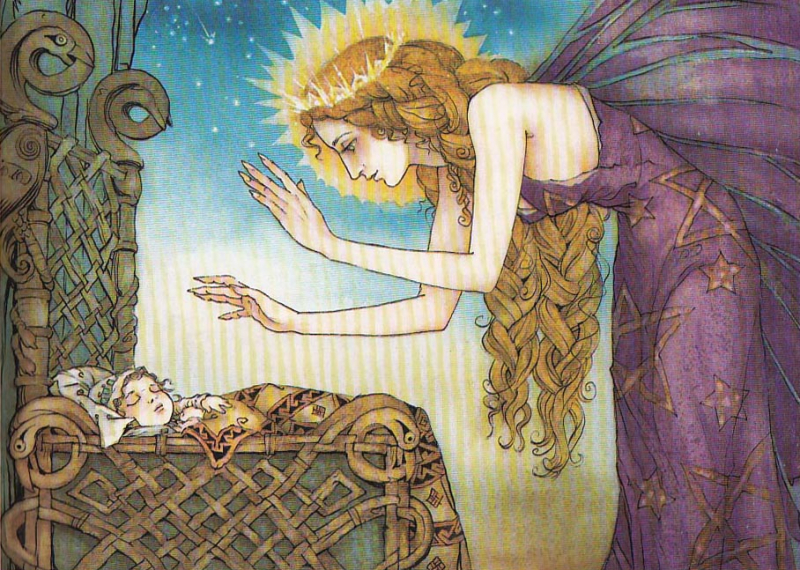 "I didn't realize it, of course, but the tales were allowing me to examine fear, anxiety, desire, sorrow. It was a dangerous world, but truer to reality than anything else we were allowed -- those safe books with their happy endings. How could the trivial nature of the here and the now compare with journeys in which heads or hands were suddenly chopped off, bones were tied in silk and buried under trees, foolish brothers became swans, and a traveler might suddenly be beset by cruel spells, horses' heads that could speak and other twists of fate and circumstance? 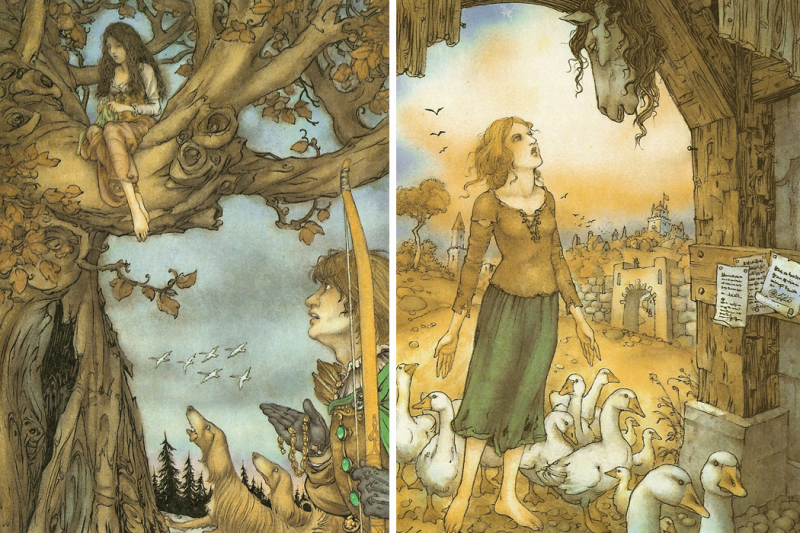 "Why such tales should feel more real to me and to most child readers than 'realistic' fare is both a simple and complex phenomenon. Fairy tales tell two stories: a spoken one and an unspoken one. There is another layer beneath the words; a riddle about the soul and its place in the greater canvas of humanity. Surely every child who reads Hansel and Gretel feels that he or she, too, is on a perilous path, one that disappears and meanders, but one that must be navigated, like it or not. That path is childhood: a journey in which temptations will arise, greed will surface, and parents may be so self-involved that they forget you entirely.... 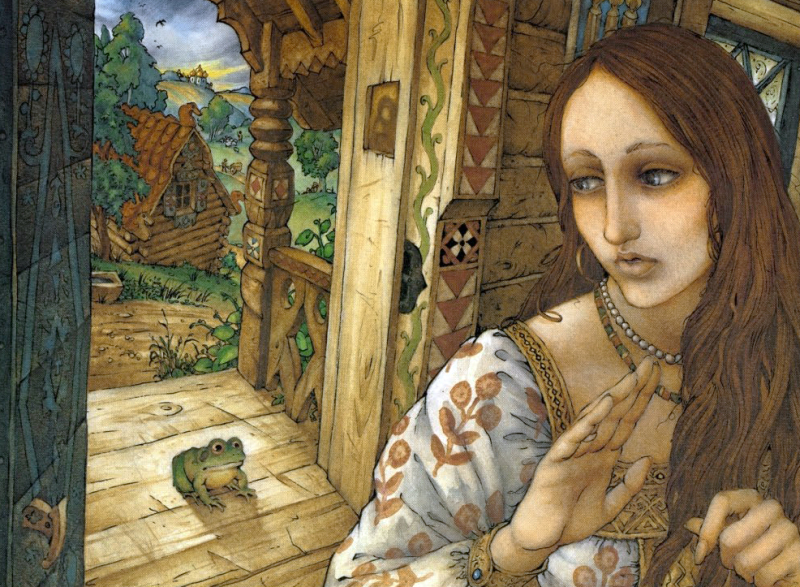 "Do people choose the art that inspires them -- do they think it over, decide they might prefer the fabulous to the real? For me, it was those early readings of fairy tales that made me who I was as a reader and, later on, as a storyteller. For me, there was no examined life without an imagined life. Just as a person is more exposed by his dreams than by his casual conversation, the imagination reveals more about one's soul than the concrete. My impulse as a beginning writer was not to write about my own life but to create another life entirely. 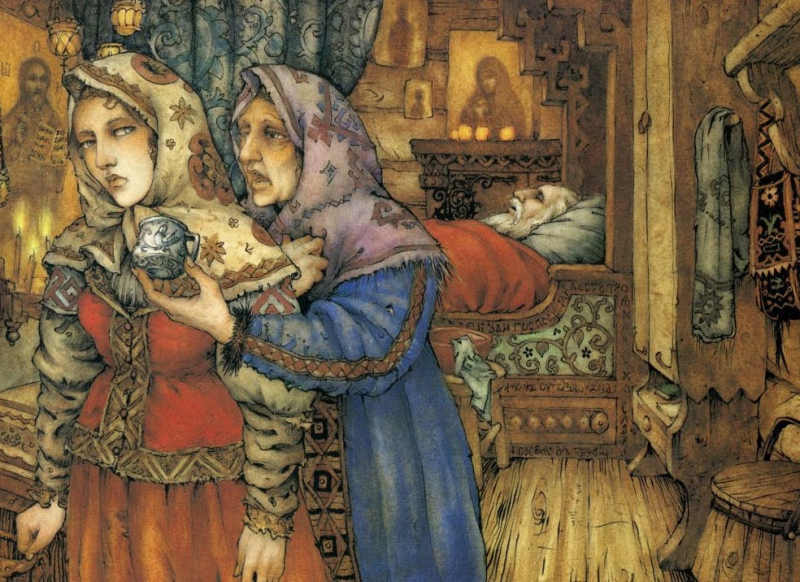 "I wasn't able to recall how I moved from 'reader' to 'writer' (How did it come about? Why did it happen?) until the day some years ago when I was cleaning out my mother's house because she'd become too ill to live at home. I found a loose-leaf folder in which I had busied myself during grade-school classes by inventing various new identities for myself. Everything about the characters was written down, much like that tried-and-true exercise for writers who wish to create 'real' characters: Write everything down; know the people inside out -- their favorite songs and colors, what they like to eat for lunch, whom they love, where they've traveled, what they yearn for in the future, what they fear most. Know who they are. It seems right that I began my career by creating a series of false identities. Did I have an unhappy childhood? It goes without saying. Did I long to escape it? Absolutely. I did so not by walking out the door, but by reading. 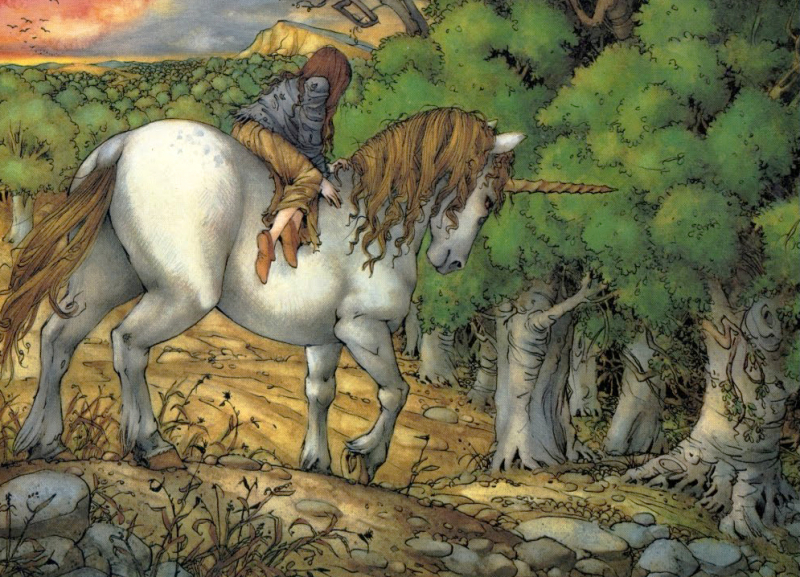 "The world of the imagination had the greatest emotional value for me as a reader and writer. What I knew, what I experienced came through those black marks on white paper, and that imagined life seemed much more real to me than the one I had actually led. Eventually, the two bled together; my reading life and my real life became one. I found subtexts not only in the stories I read, but in the lives being lived around me. A description of the here-and-now would not do. Not if there was a soon-will-be and a once-upon-a-time.

"Fairy tales, it is believed, began as stories told by women. They were 'kitchen tales,' remembered and repeated by grandmothers through the generations, later retold and written down by men such as the Grimm brothers, but still called "Household Tales." How marvelous that such fabulous stories had such a down-to-earth name, for that is what they are: Tales meant to reveal the subtext of our households and explain us to ourselves, mothers and fathers, sisters and brothers, beloved and lover. Real life indeed, although they stray as far from realism as possible." 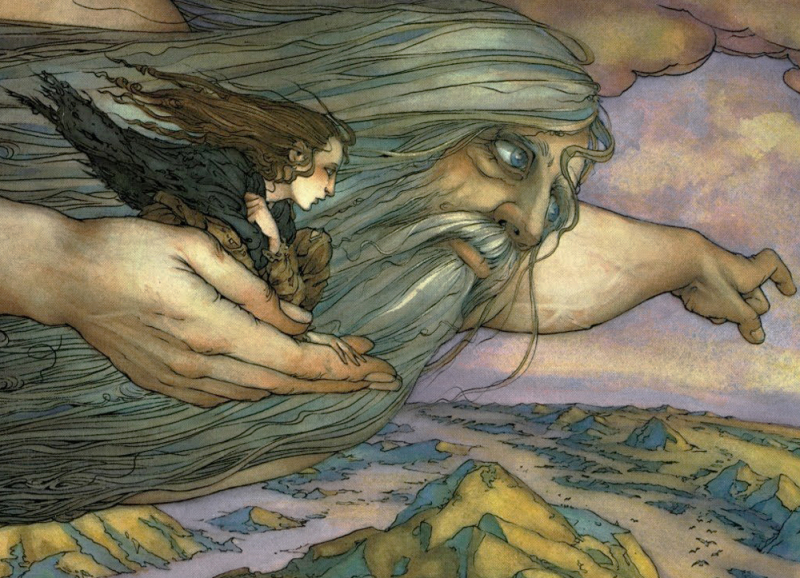 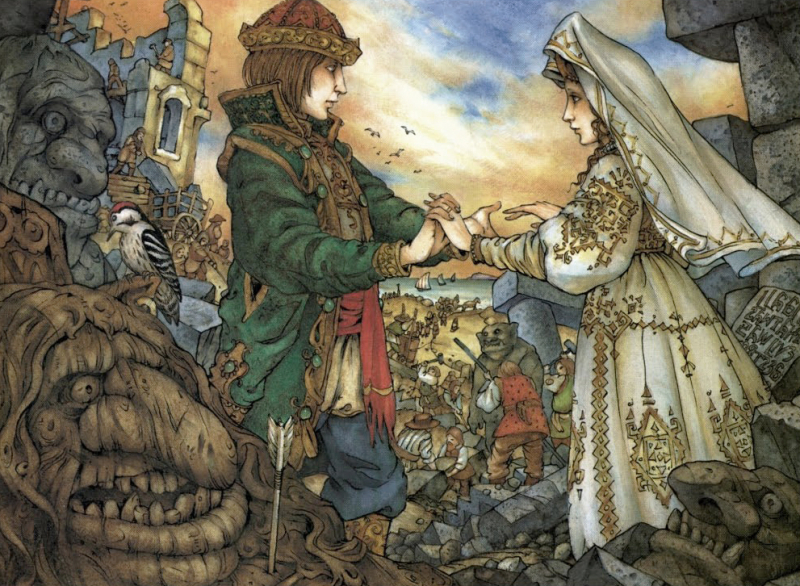 The imagery today is by American book artist Mercer Mayer, creator of over 300 books for children. Mayer grew up in Arkansas and Hawaii, studied at the Honolulu Academy of Arts and The Art Student League in New York, and published his first book, A Boy, a Dog, and a Frog, in 1967. Today, he's best known for his "Little Critter" series, and for beautiful fairy tale editions including The Sleeping Beauty, Beauty and the Beast, Favorite Tales from Grimm, and East of the Sun, West of the Moon. 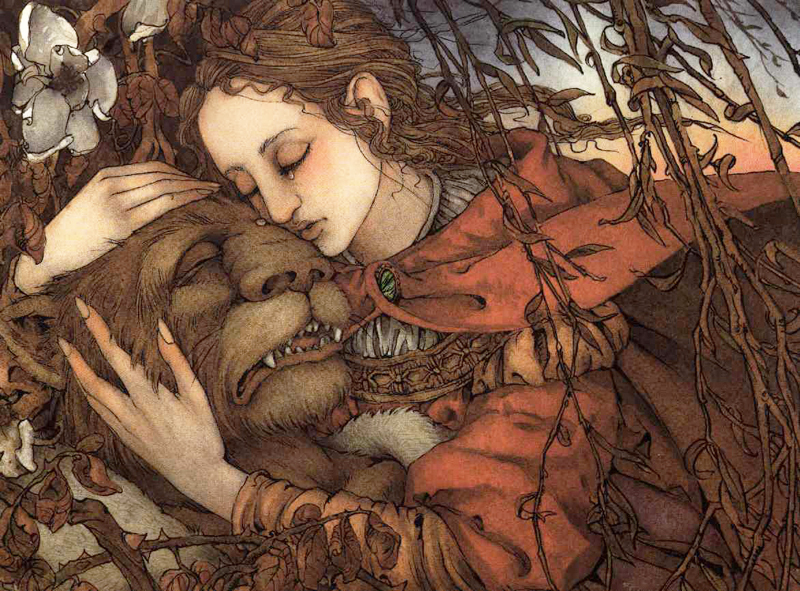 The passage above is from "Sharpening an Imagination With the Hard Flint of a Fairy Tale" by Alice Hoffman (The Washington Post, April, 20004). All rights to the text and art in the post reserved by the author and artist.

Related posts: The books that shape us, Once upon a time, The road between dreams and reality, Fairy tales and fantasy, and Threads and stories.

This is how I read as a child and how I’ve thought about my childhood reading. I also feel that the fairy tales gifted me their language. It’s largely with the tools I learned from fairy tales that I write.

He is a horse, grey, unaffected
by wind, rain, rider,
a plod of a steed,
carrying heroine through
one travail after another.
Alas, Falada.

There’s a pair of them then,
wind shriven, dust driven.
She hfallen from the heights,
princess to goosegirl
in a single plunge.
He has not so far to fall,
but at least he has a life,
If one can call this plod so.
Alas, Falada.

But the story twists,
his mistress he instructs
by a single stroke
to execute him,
hang his head upon the wall.
There is no explanation
for his request.
At a guess, magic.
And such her loyalty,
she does as he asks.
Goosegirl to butcher
in a single act.
Alas Falada.

It was not for naught.
The magic holds
long enough
to cry his name, her shame,
Alas Falada, hanging there,
as if she had done nothing
to effect that martydom.

Like clockwork
the magic turns the gears.
turns the horsse’s head.
The blood quickenes,
the plot thickens.
His prophecies help her
win back the prince
It is a fairy tale, you clod.
What falls rises.
No surprises,
except dead is dead
as a horse without his head.
Alas, alas, Falada.

Beautiful flow of words and pictures to follow a trail into and through tale telling. I loved the quotes from Alice Hoffman. Introducing me to Mercer Mayer though, that was magical in such a sweet and heart piercing why. Mercer Mayer's connection with the Honolulu Academy of Arts ... that place where so many memories swarm over decades; my home island place that Academy of Arts (which has since changed its name). To know that beautiful artwork was influenced by the stone built favorite spot across from Thomas Square off King Street? Oh, that makes me need to tell a story of a parallel world that could have been.
Thank you so much for this one, Terri.

I have often thought that the stories we are choosing in our larger culture are toxic. Think of how many books, televisions shows and movies are about murder. Or war. And hovering over everything; the myth of Armegeddon; the end of days. The movies are full of it; there are dozens of books set in bleak, dystopian futures. Some might say that the media reflect the culture, but sometimes I think it is helping to CREATE a culture focused on death, violence and ultimate destruction. Maybe our failure to nurture our world is not a failure of technology, or overpopulation, or politics. Maybe it is, at its roots, a failure of imagination. And what best feeds and fosters imagination? Why stories, of course?

I love Alice Hoffman's novels, and feel just this way about fairy-tales. What lovely posts (and illustrations)