The story of Bluebeard
Tunes for a Monday Morning

I'm telling you stories. Trust me. 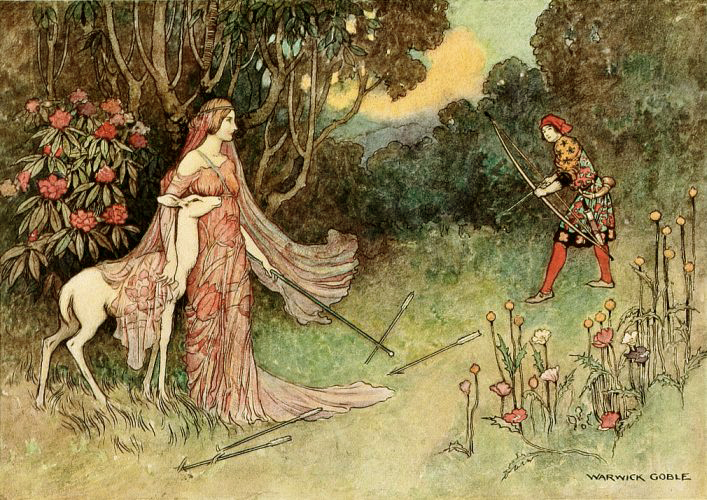 From "Potato Soup" by Marina Warner (published in her short history of fairy tales, Once Upon a Time):

"Princes and queens, palaces and castles dominate the foreground of a fairy tale, but through the gold and glitter, the depth of the scene is filled with vivid and familiar circumstances, as the fantastic faculties engage with the world of experience. Realism of content also embraces precise observation of detail, and contrasts between earthiness and preposterous fancy sharpen the entertaining effect. 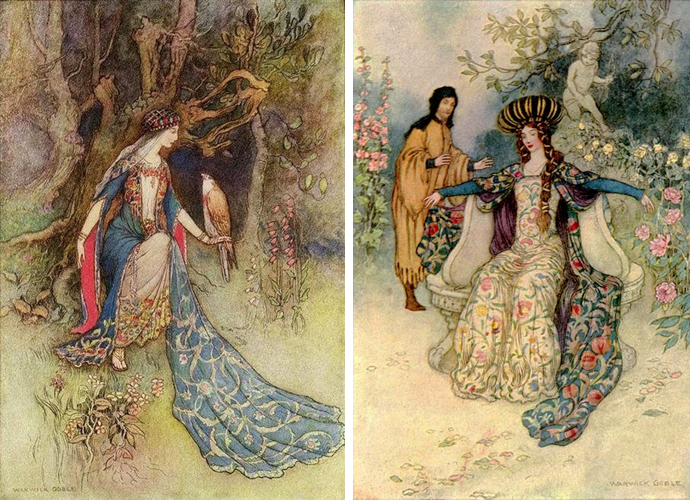 "Charles Perrault tells us, for example, that Cinderella's cruel sisters have dressmakers' pins from England, the most fashionable and most coveted article at the time. In the Grimms' The Three Golden Hairs, the Devil himself is the adversary, and hell is a kitchen much like any ordinary kitchen where his granny sits by the stove. When the brave hero appears, a poor lad who's been set an impossible task by the proud princess to fetch her the trophy (the hairs in the title), Granny is kind to him, and turns the boy into an ant to keep him safe. She hides him in the folds of her apron until she herself has pulled out the three hairs, shushing the Devil as she does so. She then turns our hero back again into human form and sends him back to the world above to marry the princess.

"It is emblematic that the Devil's kind old granny can pull out the required hairs because she is de-lousing him, something that's comforting even in Hell. Each of the three hairs then brings about a blessing that makes a joke of the story's roots in toil and hunger: with the first, the Devil reveals that a spring has died up because an old toad is squatting on a stone that's blocking it; with the second that an apple tree no longer bears fruit because a mouse is nibbling through its roots; and with the third that the ferryman, who's working day in and day out, poling passengers across the river need only put his pole in the hands of one of his passengers to be free. 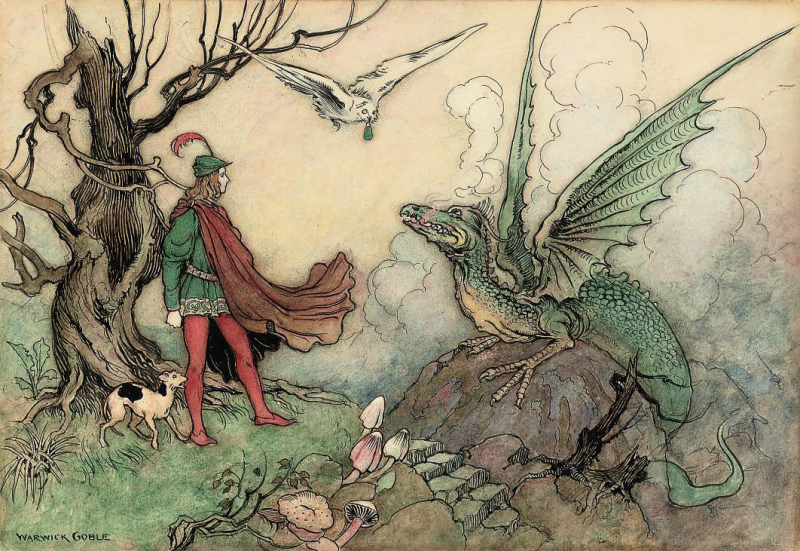 "Many fairy tales about golden-haired princesses with tiny feet still address the difficulty, in an era of arranged marriage and often meagre resources, of choosing a beloved and being allowed to live with him or her. Many explore other threats all too familiar to the stories' receivers: the loss of a mother to childbirth is a familiar, melancholy opening to many favourites. 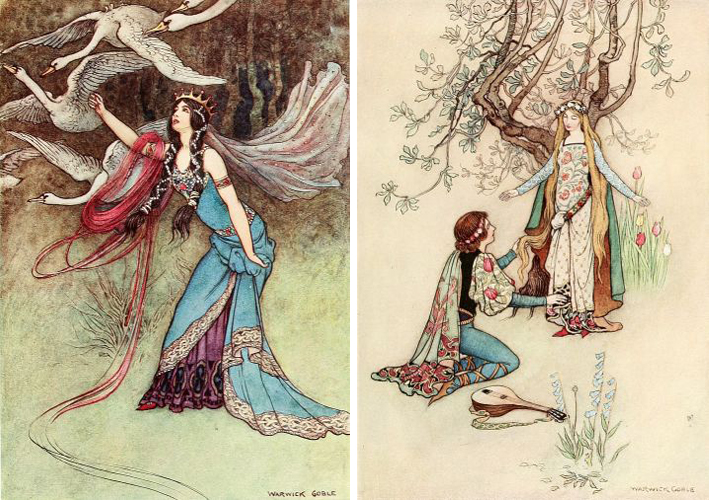 "Behind their gorgeous surfaces you can glimpse an entire history of childhood and the family: the oppression of land-owners and rulers, the ragamuffin orphan surviving by his wits, the maltreated child who wants a day off from unending toil, or the likely lad who has his eye on a girl who's from a better class than himself, the dependence of old people, the rivalries between competitors for love and other sustenance. 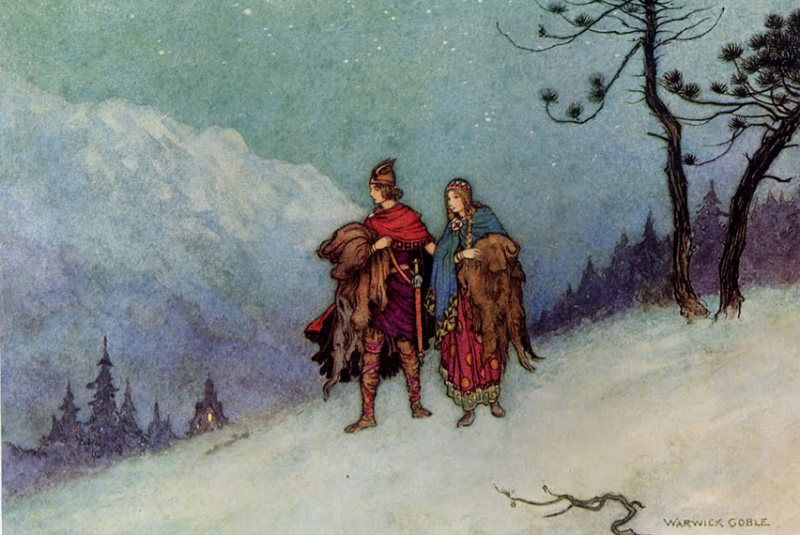 "Unlike myths, which are about gods and superheroes, fairy tale protagonists are recognizably ordinary working people, toiling at ordinary occupations over a long period of history, before industrialization and mass literacy. In the Arabian Nights the protagonists belong to more urban settings, and practice trades and commerce. Some are abducted and then sold into slavery, many are cruelly driven by their masters and mistresses. In the European material, the drudgery is more rural, the enslavement more personal in its cruelty. It is fair to say tale fairy tale heroines are frequently skivvies who take on the housework uncomplainingly, and that this kind of story won favour in the Victorian era and later, at the cost of eclipsing lively rebel protagonists, tricksters like Finette (Finessa in Engligh translation), who turns the tables on her sisters' seducers, or Marjana the slave girl who pours boiling oil on the Forty Thieves. 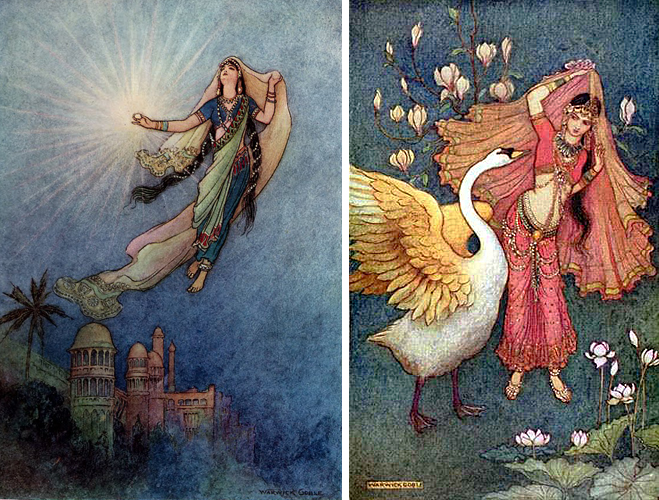 "Direct and shared experiences of material circumstances -- of the measure sociologists use to establish the well-being of a given society -- are taken up by fairy tales as a matter of course: when the mother dies giving birth, that child will have to survive without her love and protection, and that is a grim sentence. The pot of porridge that is never empty speaks volumes about a world where hunger and want and dreadful toil are the lot of the majority, whose expectations are rather modest by contemporary standards. 'A fairy tale,' Angela Carter once remarked, 'is a story in which one king goes to another to borrow a cup of sugar.' 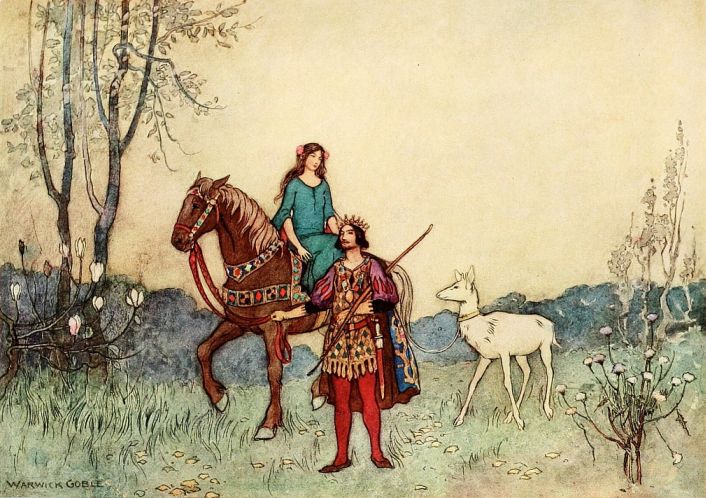 "D.H. Lawrence famously proclaimed, 'Trust the tale, not the teller.' To which Jeanette Winterson retorts, repeating again and again, 'I'm telling you stories. Trust me.' But in what ways can we trust the tale -- and even trust the teller? How can such preposterous fantastic stories be true, as Italo Calvino and others who value fairy tales have claimed? 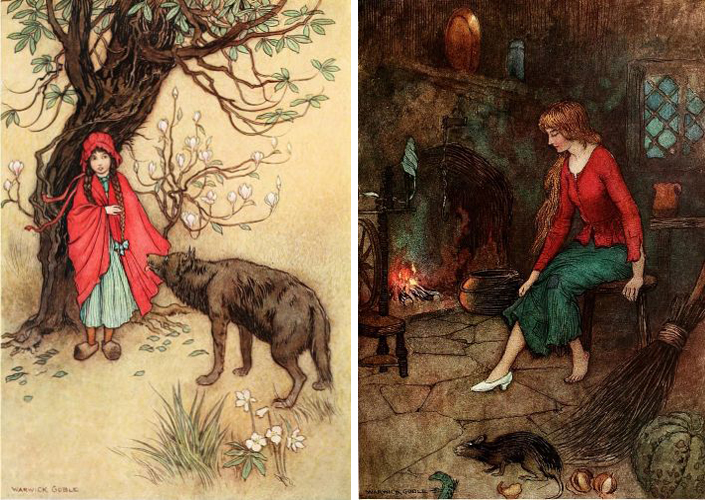 "One answer is that a story is an archive, packed with history: just as an empty field in winter can reveal, to the eye of an ancient archaeologist, what once grew there, how long ago the forest was cleared to make way for pasture, and where the rocks that were picked out of the land eventually fetched up, so a fairy tale bears the marks of the people who told it over the years, of their lives and their struggles. 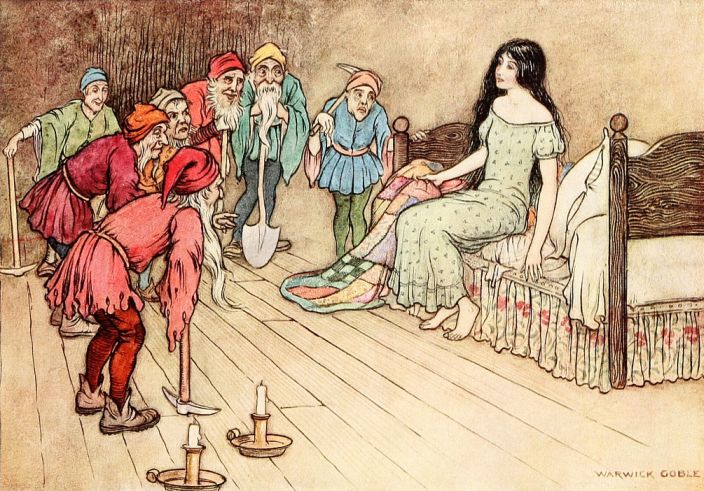 "According to these distinctions, it is possible to see how fairy tales, while being utterly fantastical in presentation, are forthright in their realism as to what happens and can happen.... 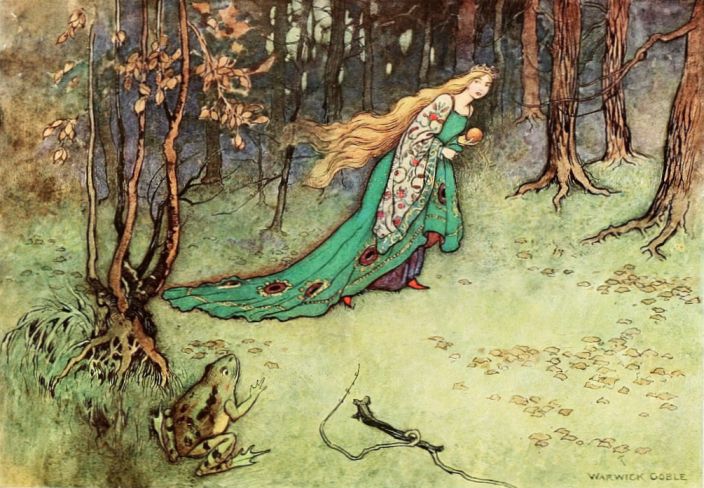 "The happy ending, that defining dynamic of fairy tales, follows their relation to reality. Ordinary misery and its causes are the stories' chief concern. But writers -- and storytellers -- address their topics with craft, and it is often more compelling to translate experience through metaphor and fantasy than to put it plainly. As C.S. Lewis wrote in the title of one of his essays, 'Sometimes Fairy Stories May Say Best What's To Be Said.' 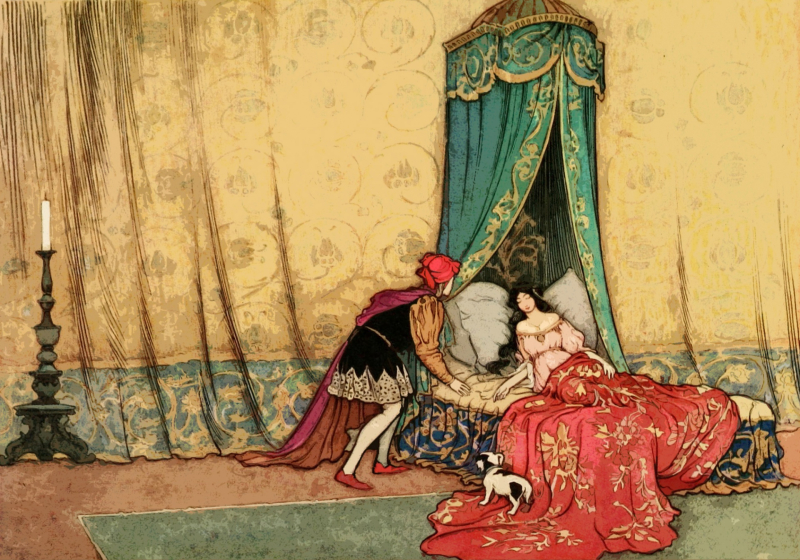 "Even a writer as dreamy (and privileged) as the German Romantic Novalis defined the form as a way of thinking up a way out: 'A true fairytale must also be a prophetic account of things -- an ideal account -- an absolutely necessary account. A true writer of fairy tales sees into the future." 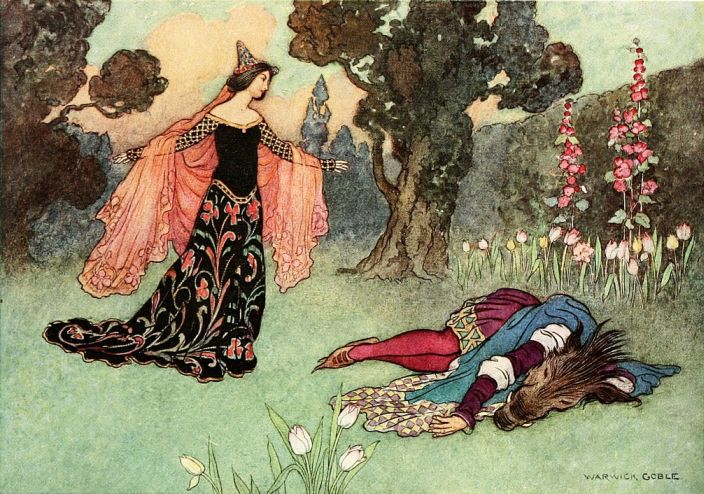 "The stories face up to the inadmissable facts of reality and promise deliverance. This honest harshness combined with the wishful hoping has helped them to last. If literature is the place we go to, in Seamus Heaney's words, 'to be forwarded within ourselves,' then fairy tales form an important part of it. If literature gives 'an experience that is like foreknowledge of certain things which we already seem to be remembering,' fairy tales offer enigmatic, terrifying images of what the prospects are, of the darkest horrors life may bring. Yet the stories usually imagine ways of opposing this state of affairs, or at worst, of having revenge on those who inflict suffering, of turning the status quo upside down, as well as defeating the natural course of events; they dream of reprisals, and they sketch alternative plots lines. They are messages of hope arising from desperate yet ordinary situations." 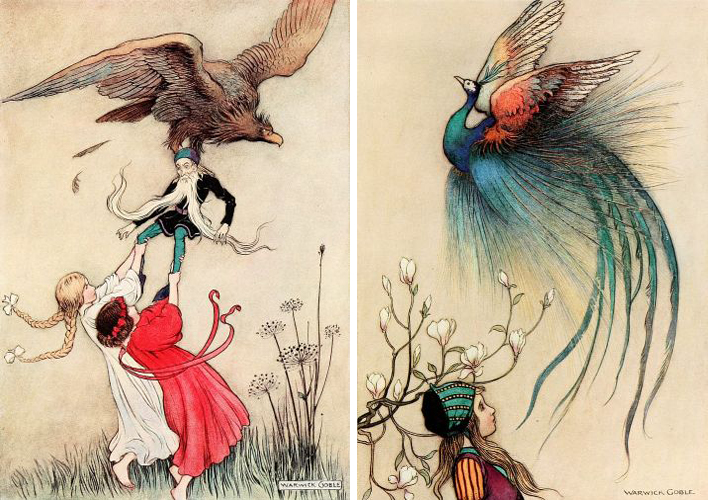 "There are certain children who are told they are too sensitive, and there are certain adults who believe sensitivity is a problem that can be fixed in the way that crooked teeth can be fixed and made straight. And when these two come together you get a fairy tale, a kind of story with hopelessness in it. I believe there is something in these old stories that does what singing does to words. They have transformational capabilities, in the way melody can transform mood. They can't transform your actual situation, but they can transform your experience of it. We don't create a fantasy world to escape reality, we create it to be able to stay.

"I believe we have always done this, used images to stand and understand what otherwise would be intolerable.” 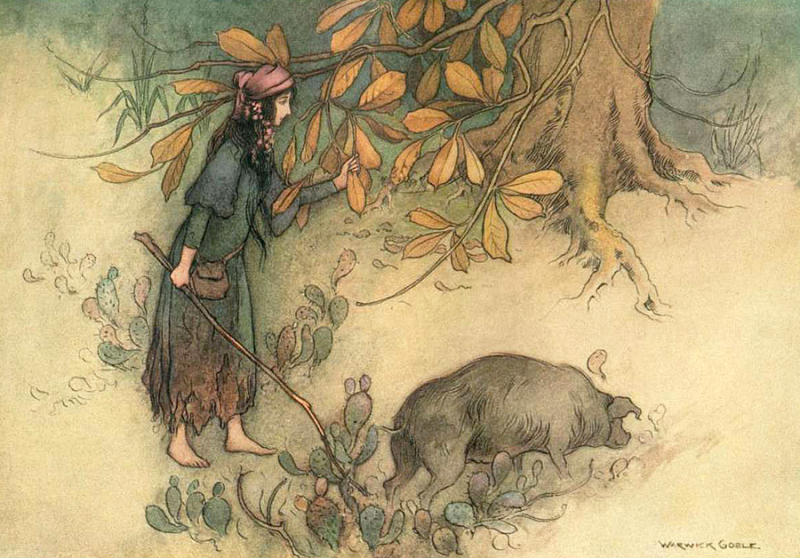 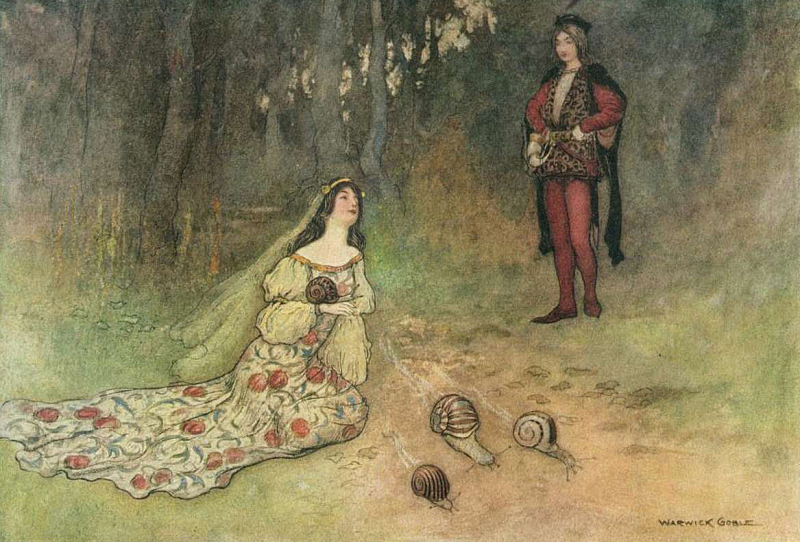 Pictures: The art today is by Warwick Goble (1862-1943). Born in north London, he trained at the Westminster School of Art and worked for a printing company before becoming a popular illustrator of fairy tale books and other editions for children and adults.

Words: The passages above are from Once Upon a Time: A Short History of Fairy Tale by Marina Warner (Oxford University Press, 2014), and What Is It (Drawn & Quaterly, 2008), by cartoonist Lynda Barry. All rights reserved by the authors.

Lovely and spellbinding, as ever.

This is one of those posts in which you start putting in bold all those phrases that resonate and find there's more bold than not when you're done. I wish I had a wall big enough to write it all on so I would see it and be reminded every day... I have to go re-read Once Upon A Time again. I'm due - thank you for the appetizer!
Thank you also for including that quote from Lynda Barry! She's a modern transformation coach (fairy godmother?) - her perspective on creating fantasy worlds "not to escape reality... (but) to be able to stay" speaks so much to why fairy tales are so very important right now, and why so many people are turning to them.
Thank you for this.

The distinction between myth and fairy tale gives me pause, and Lynda Barry refreshed me
Thank you!