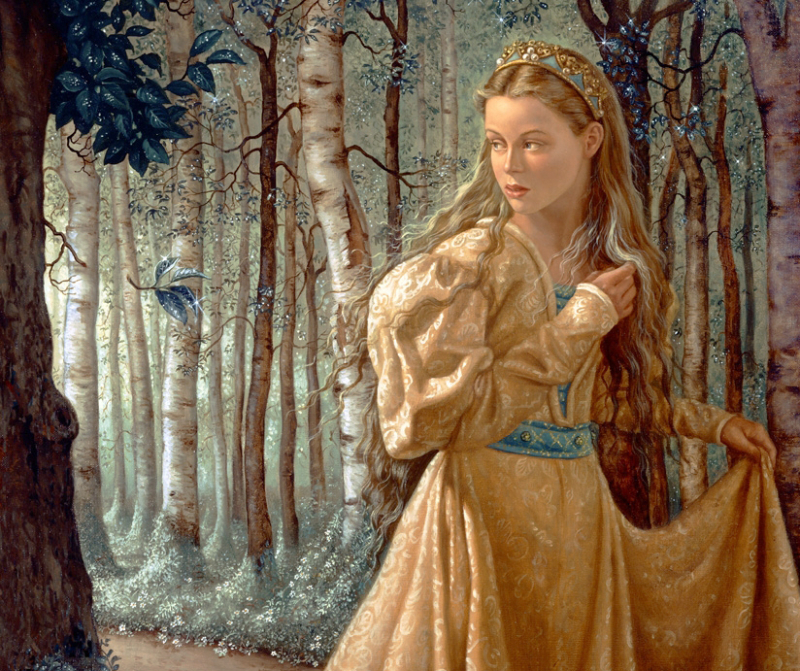 From Touch Magic: Fantasy, Faerie & Folklore in the Literature of Children by Jane Yolen:

"Over the last few years there have been many educational councils and conferences, papers and presentations about the need to return to the Basics -- to the teaching of the fundamental skills of reading, writing and arithmetic. But they are not the only subjects that are vital to our intellectual and human growth. An understanding of, a grounding in, a familiarity with the old lores and wisdoms of the so-called dead worlds is also a basic developmental need. Folklorist Charles Potter has written, 'Folklore is a lively fossil that refuses to die.' If children are invited to greet the great stories, to shake hands with the lively fossil, they will soon discover -- as did their parents before them -- that the well-kept bones are indispensable to the life of the mind.... 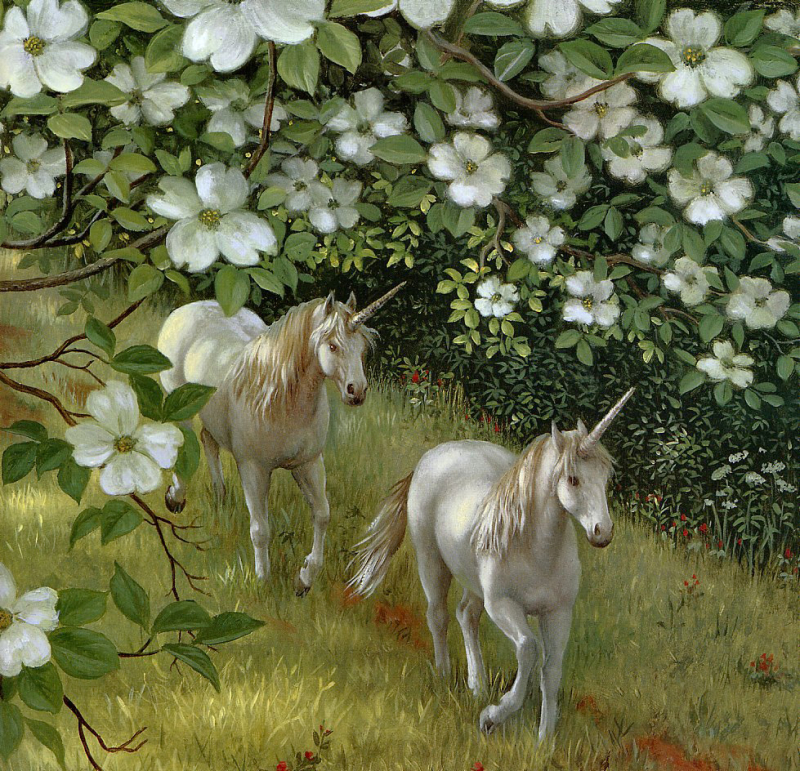 "One of the basic functions of myth and folk literature is to provide a landscape of allusion. With the first story a child hears, he or she takes a step toward perceiving an new environment, one that is filled with quests and questers, fated heroes and fetid monsters, intrepid heroines and trepid helpers, even incompetent oafs who achieve competence and wholeness by going out and trying. As the child hears more stories and tales that are linked in both obvious and subtle ways, the landscape is broadened and deepened, and becomes more fully populated with memorable characters. These are the same folk that the child will meet again and again, threading their archetypal ways through the cultural history of our planet. 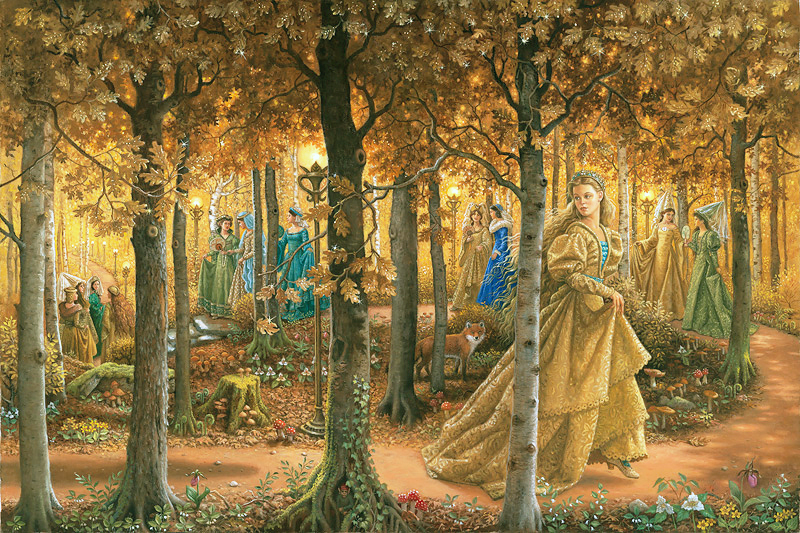 "Stories lean on stories, art on art. This familiarity with the treasure-house of ancient story is necessary for any true appreciation of today's literature. A child who has never met Merlin -- how can he or she really recognize the wizards in Earthsea? The child who has never heard of Arthur -- how can he or she totally appreciate Susan Cooper's The Grey King? The child who has never known dryads or fauns will not recognize them in Narnia, or find their faces on museum walls or in the black silhouettes on Greek vases. Never to have trod the stony paths of Mount Pelion with Chiron and to have seen only the sexually precocious centaurs of Fantasia or the horsemen on TV's Hercules is to be diminished, narrowed, condemned to live in a cultural landscape that is dry as dust." "[Folklore also provides] a way of looking at another culture from the inside out. If a child becomes familiar with the pantheon of Greek gods, who toy with human lives as carelessly as children at play, then the Greek world view begins to come into focus. If a child learns about the range of Norse godlings who wait for heroic companions to feast with them at Valhalla, then the Vikings' emphasis on battle derring-do makes more sense. The study of the myth-making process, of those things that come together in a culture and propel a folk towards a coherent mythology, may be a very sophisticated one indeed, but its beginnings are back in the tales themselves. 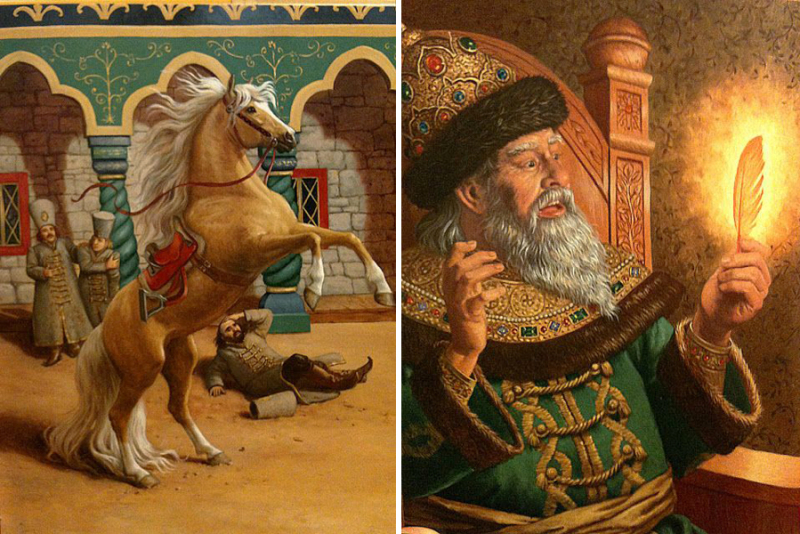 "Stories lean on stories, cultures on cultures. Just as any great city is built on the stones and bones of its ancestors, so too is any mythology. And if our children can look at their own modern folklore within a broader context, they will see some very surprising shadows indeed. Spider-Man and TV's Hercules, Buffy and Xena do not spring from a void but from needs within our own culture. And those needs lean on past needs.  Maureen Duffy writes in The Erotic World of Faery: 'We remake our mythology in every age out of our own needs. We may use ideas lying around loose from a previous system or systems as part of the fabric. The human situation doesn't radically alter and therefore certain myths are constantly reappearing.' " 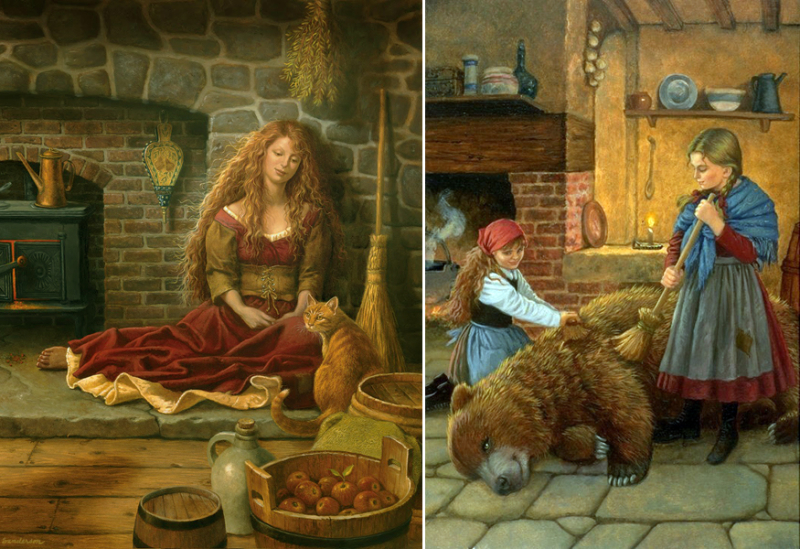 "And if we deny our children their cultural, historical heritage, their birthright to these stories, what then? Instead of creating men and women who have a grasp of literary allusion and symbolic language, and a metaphorical tool for dealing with the serious problems of life, we will be forming stunted boys and girls who speak only a barren language, a language that accurately reflects their equally barren minds. Language helps develop life as surely as it reflects life. It is a most import part of our human condition.

"Our children today face a serious deprivation -- the loss of the word, of words. For as stories depend on stories, lives depend on lives. Contact and continuity are essential links in the long chain of human culture.... 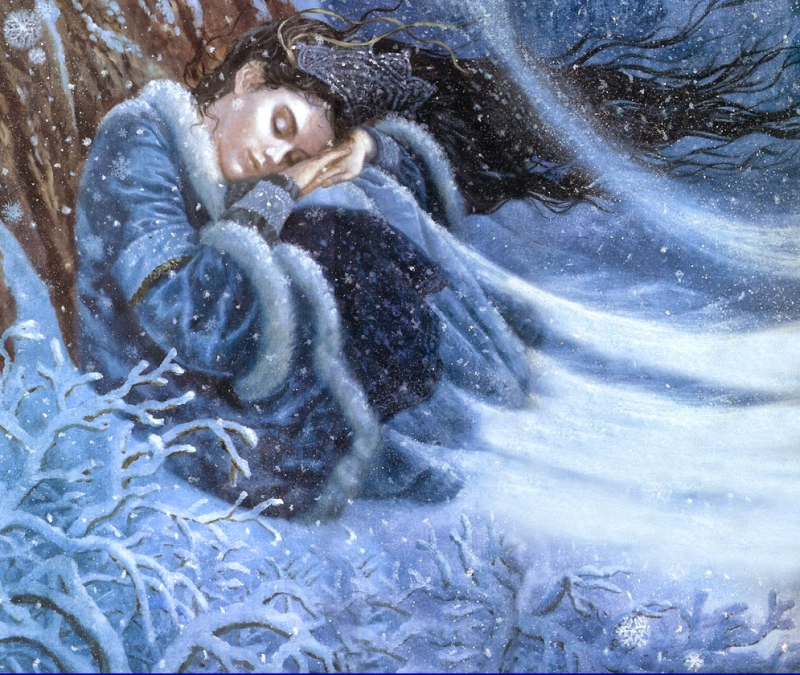 "A child conversant with the old tales accepts them with an ease born of familiarity, fitting them into his own scheme of things, endowing them with new meaning. That old fossil, those old bones, walk again, and sing and dance and speak with a new tongue. The old stories bridge the centuries." 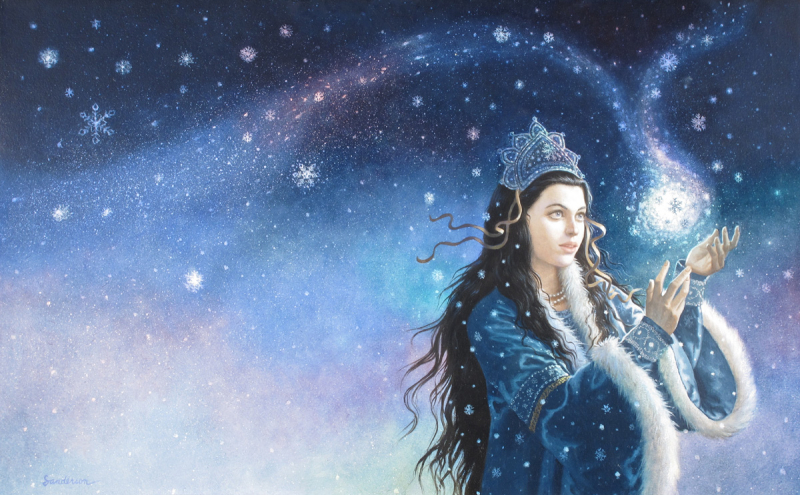 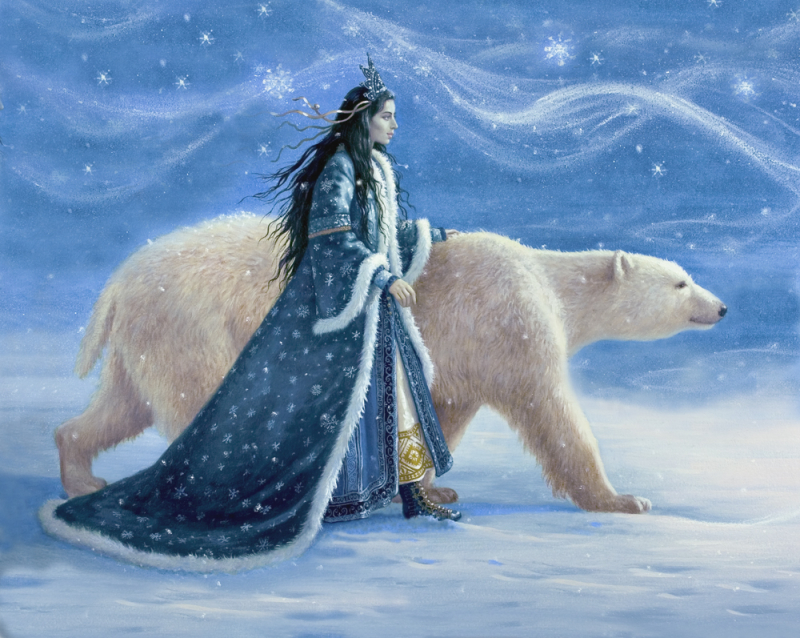 The imagery today is by Ruth Sanderson, a book artist and author based in western Massachusetts. Ruth grew up in a small town where her grandmother was a librarian, and much of her youth was spent in the woods, on the back of a horse, or with her nose in a book. She studied at Paier College of Art in Connecticut, then embarked on an illustration career focused on children's books in the mid-1970s. She has published over 80 books since then, including Cinderella, The Sleeping Beauty, The Twelve Dancing Princesses, Snow White & Rose Red, Goldilocks, The Enchanted Wood, The 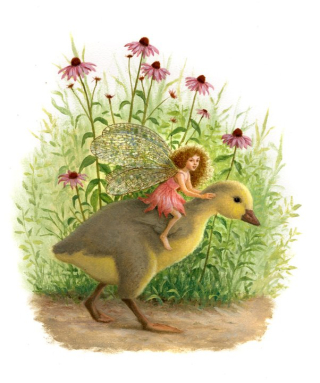 "The archetypal characters and the symbolism that one finds in fairy tales," she says, "contain truths that are universal and can be as meaningful for children today as they have been for centuries past. So many of them are 'rites of passage stories,' where the hero (child) leaves home to seek adventure or to go on an impossible quest, learning in the process how to become independent and to form new relationships outside of parental influence. In The Twelve Dancing Princesses, the three magical woods that the princesses pass through are symbolic to me of their rite of passage into adulthood. 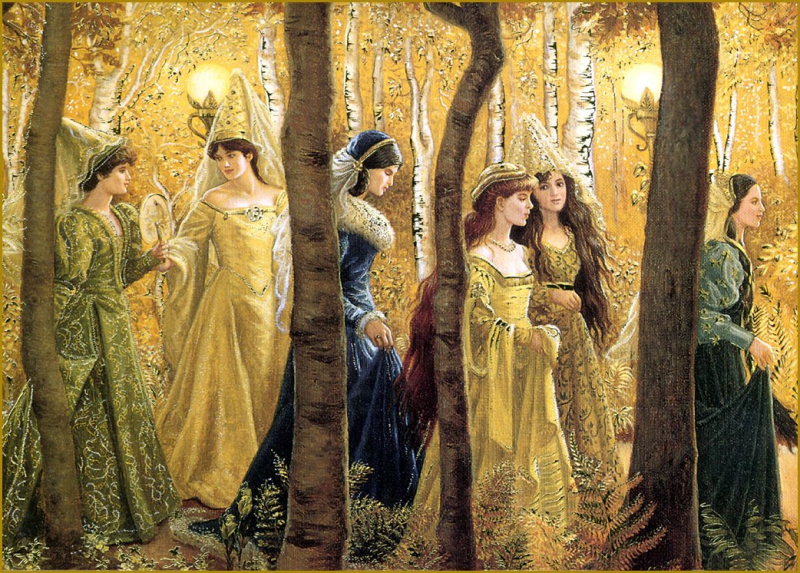 "My original story The Enchanted Wood grew out of my love for the woods, for paths, for fairytales. Trees have always had the ability to hold me spellbound, at sunset especially. An old tree can have such character and majesty. In the story, three sons go on a quest for the Heart of the World (which is a magical “tree of life”) The fact that success often comes at a great sacrifice is the central theme of this story.

"Papa Gatto is the result of combining a number of Italian fairytales with a similar element -- a talking cat. It is a Cinderella-type story with a bit of Puss in Boots as well. And a slightly modern twist at the end, when the young lady declines the Prince’s proposal in favor of living with her beloved cats!" 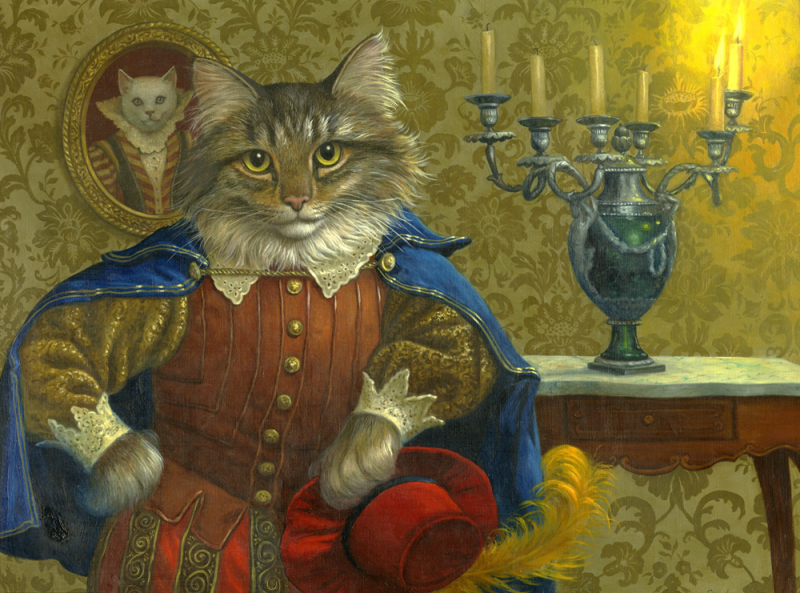 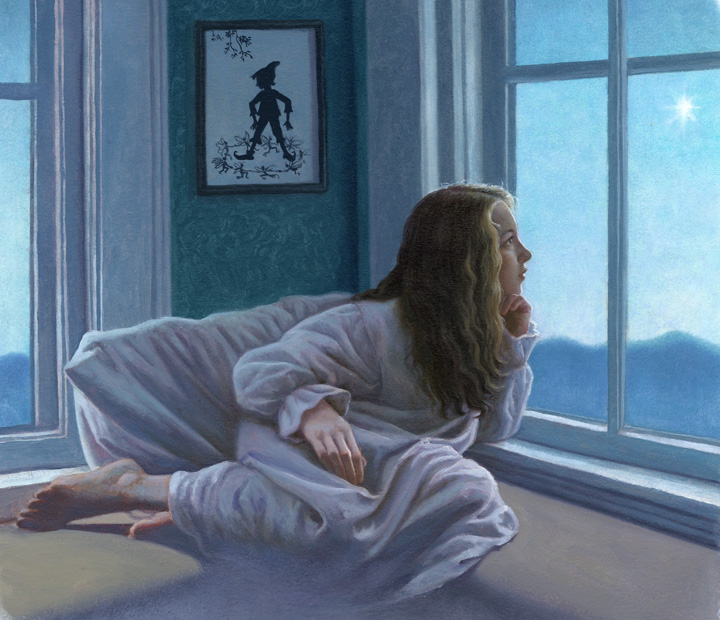 The passages quoted above are from "How Basic is Shazam?" by Jane Yolen, published in Touch Magic: Fantasy, Faerie & Folklore in the Literature of Childhood (Philomel, 2981; August House, 2000). All rights to the text and art in the post reserved by the author and artist.

"a landscape of allusion" is simply brilliant. As are these illustrations (I have the Papa Gatto).

I agree with you, Amanda Craig, about "a landscape of allusion" being simply brilliant.

Terri, your post showed up early in the morning and throughout the day I have reread it, and reread it from my copy (Public Library) of Touch Magic. Stories lean ... reminds me of a post you published that introduced us readers to Briallen Hopper's book Hard to Love. Hopper's essay about leaning has become a personal fairy tale for me; and perhaps it is that sort of missing linkage that leaving many of us adults hungry for "landscape of allusion."

To write the way through I have learned to tetter, on the imbalanced landscape which we walk so often. Leaning into the angle like a triangle, dancing with gravity my capacity to endure does come, as Jane wrote, helps to recognize Wizards and tether ourselves to those genetics within marked with personal "W"s.