A day out at Chagford Show
The mystery of stories

Many of our friends and colleagues in the fantasy publishing field have been in Dublin over the last several days for the World SFF Convention, and so music and poetry from Ireland seems an appropriate way to start off the week. All the videos here were shot by filmmaker Myles O'Reilly, who specializes in documenting the work of Irish musicians at home and abroad. I love his work, which beautifully captures this moment in time in the Irish music scene.

Below: "Rí Rua" by This is How We Fly, fusing traditional music of Ireland and Sweden with jazz improvisation and clog dancing. The performance was filmed at Fumbally Stables in Dublin, 2017.

Above: "I Courted a Wee Girl" performed by Ye Vagabonds (brothers Brían and Diarmuid Mac Gloinn), who grew up in rural Carlow but are now based in Dublin.

"In the summer of 2018," says O'Reilly, "I was invited to document a tour with Ye Vagabonds who were performing on six islands off the coast of Ireland. The result is Seven Songs On Six Islands, a musical and visual odyssey through some of the most remote and beautiful edges of the country."  The full film can be viewed O'Reilly's Patreon page, where, if you make a pledge, your funds will help him to make one similar music documentary per month.

Above: "Factory Girl" performed by two stalwarts of Irish music: Lisa O'Neill (from Cavan) and Radie Peat (of the band Lankum, from Dublin). The video was filmed for O'Reilly's This Ain't No Disco series showcasing Irish music and spoken word.

Below: "Morning," a gentle song by the folk duo LemonCello (Laura Quirke and Claire Kinsella), who started performing together at university in County Kildare. Cello, harmonies, scones, adorable dogs...there's a lot to like here.

And one more to end with:  "iomramh" by Dublin poet and playwright Stephen James Smith, filmed for the Ain't No Disco series. "The poem," says Smith, "was written at Cill Rialaig in County Kerry. An iomramh is a class of old Irish tale concerning a hero’s sea journey to the otherworld. Each of these journeys ostensibly takes place in the physical world, but in parallel with this they are, on a deeper level, also journeys to oneself." 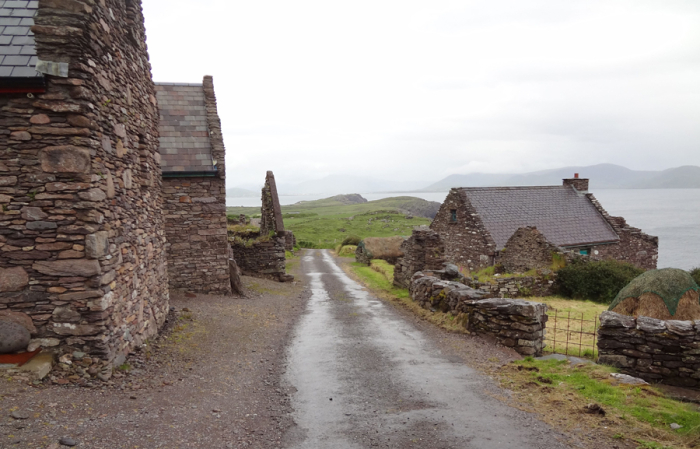 OMG, this is incredible music this week. And the poem! My heart is full.

such delight - thank you so much

Thank you Terri. Stephen James Smith: what a find. And of course the music just makes me think of Thomas.