Living at a walker's pace 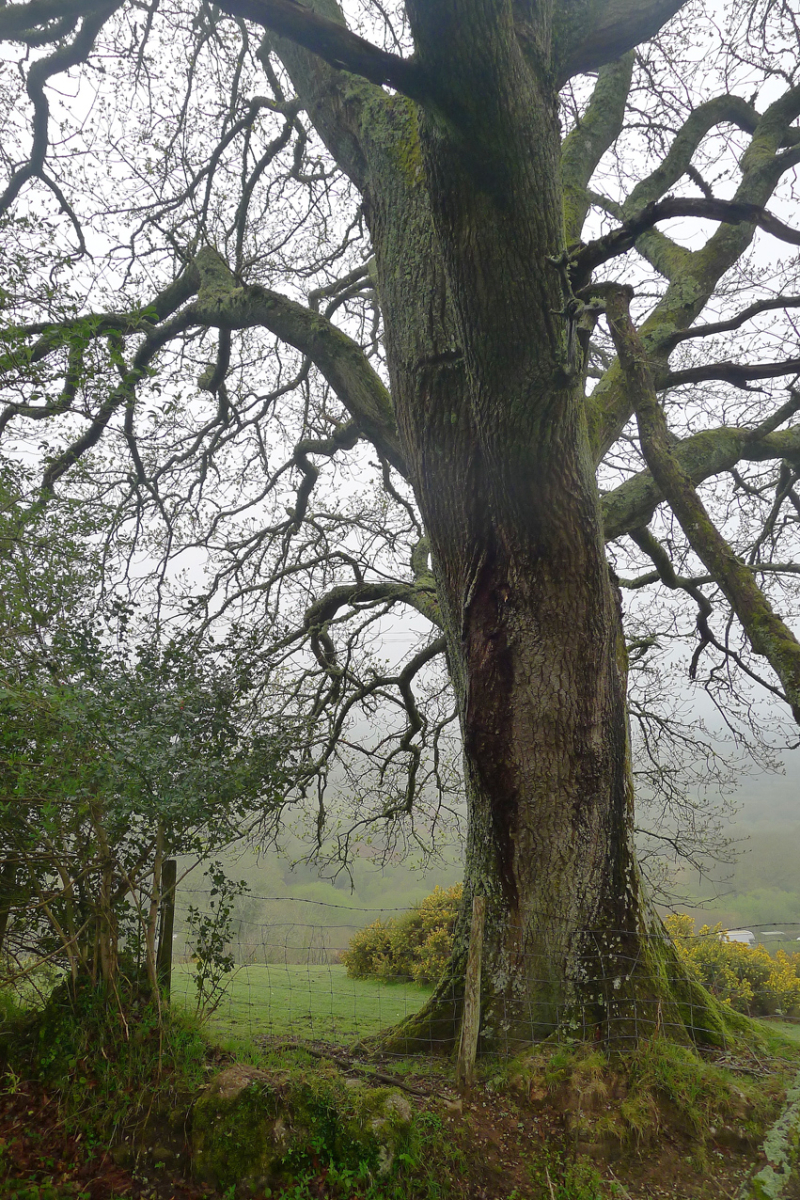 It's our fifth week of lock-down in the UK, and the circumference of our daily lives has shrunk to places we can reach on foot, "walking for exercise" being one of the few acceptable reasons to leave the house. I live in the country and work from home, so this isn't an enormous change for me -- but for many, accustomed to fast-paced lives mediated by cars or public transit, re-discovering the physical, mental, and creative benefits of experiencing the world solely on foot has been one of the rare gifts of this hard and worrisome time. 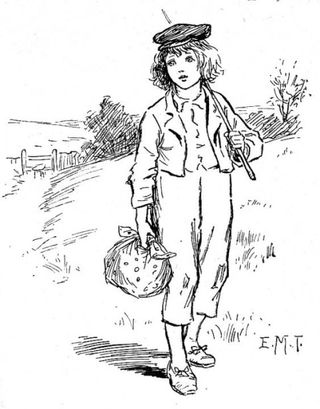 In her beautiful book Wanderlust, Rebecca Solnit looks at the history of walking through the lens of philosophy, sociology, environmental science, politics, literature and other arts. Reflecting on her own practice of walking in the hills near San Francisco, she writes:

"These linked paths and roads form a circuit of about six miles that I began hiking ten years ago to ward off my angst during a difficult year. I kept coming back to this route for respite from my work and for my work too, because thinking is generally thought of as doing nothing in a production-oriented culture, and doing nothing is hard to do. It is best done as disguising it as something, and the something closest to nothing is walking. Walking itself is the intentional act closest to the unwilled rhythms of the body, to breathing and the beating of the heart. It strikes a delicate balance between working and idling, being and doing. It is a bodily labor that produces nothing but thoughts, experiences, arrivals." 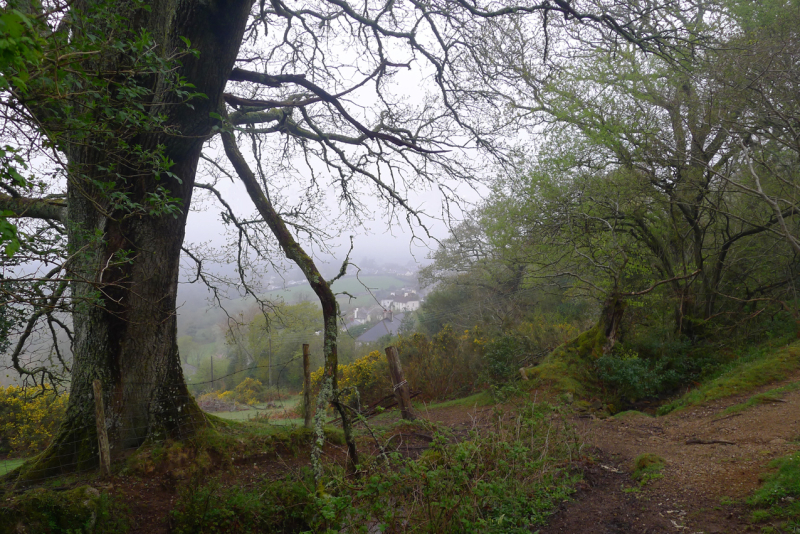 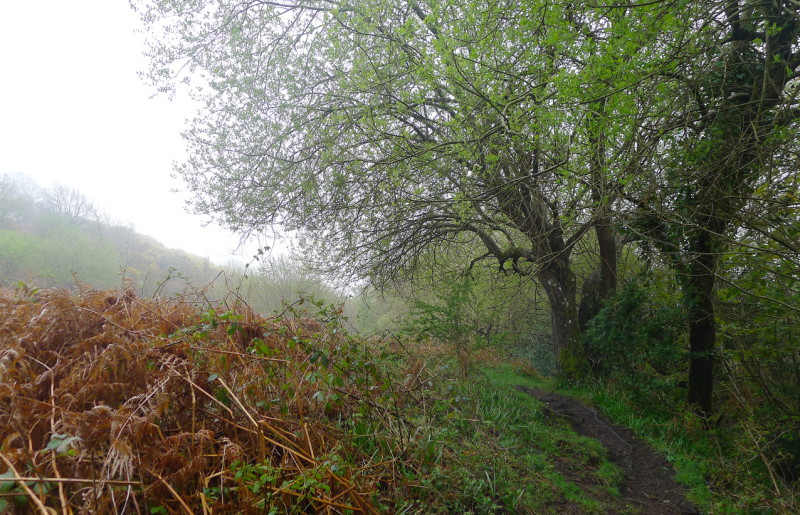 "The rhythm of walking," she notes, "generates a kind of rhythm of thinking, and the passage through a landscape echoes or simulates the passage through a series of thoughts. This creates an odd consonance between internal and external passage, one that suggests that the mind is also a landscape of sorts and that walking is one way to traverse it. A new thought often seems like a feature of the landscape that was there all along, as thought thinking were traveling rather than making. And so one aspect of the history of walking is the history of thinking made concrete -- for the motions of the mind cannot be traced, but those of the feet can. 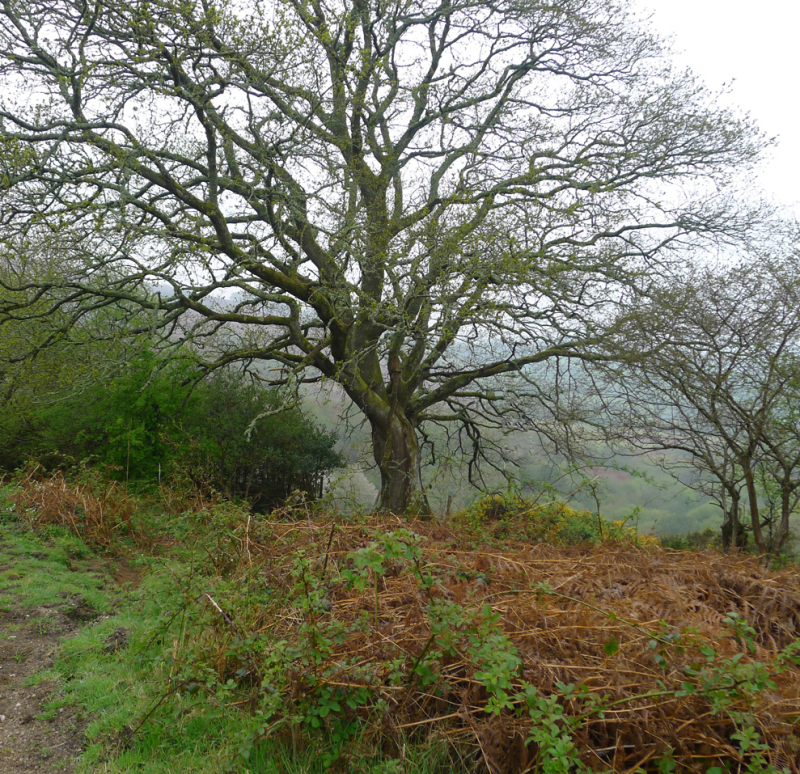 "Walking can also be imagined as a visual activity, every walk a tour leisurely enough both to see and think over the sights, to assimilate the new into the known. Perhaps this is where walking's peculiar utility for thinkers comes from. The surprises, liberations, and clarifications of travel can sometimes be garnered by going around the block as well as going around the world, and walking travels both near and far.

"Or perhaps walking should be called movement, not travel, for one can walk in circles or travel around the world immobilized in a seat, and a certain kind of wanderlust can only be assuaged by the acts of the body itself in motion, not the motion of the car, boat, or plane. It is the movement as well as the sights going by that seems to make things happen in the mind, and this is what makes walking ambiguous and endlessly fertile: it is both means and end, travel and destination." 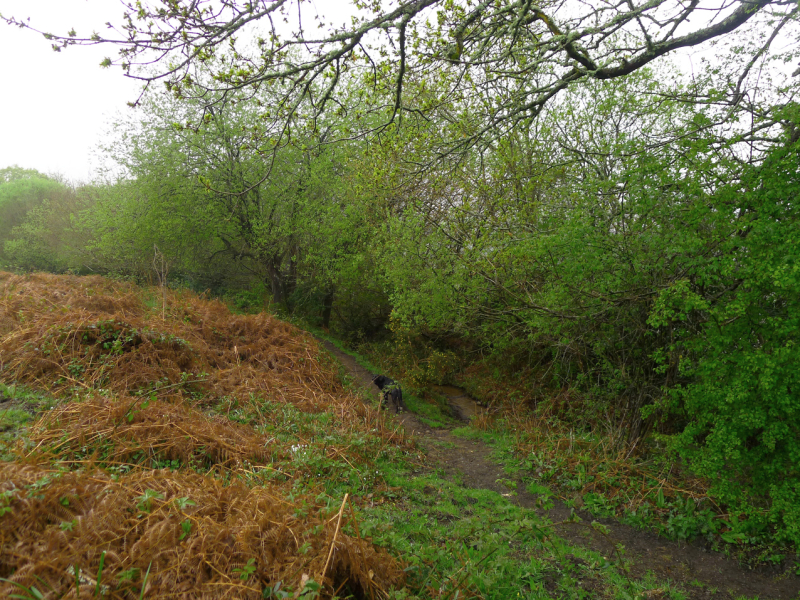 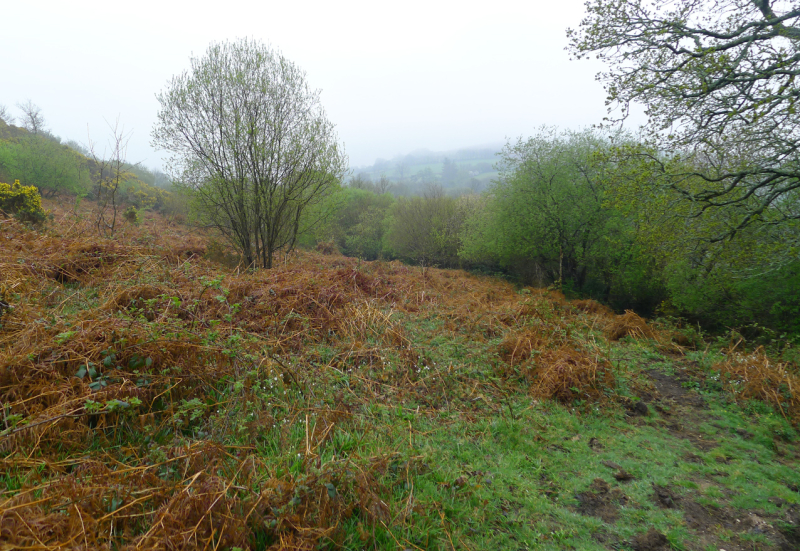 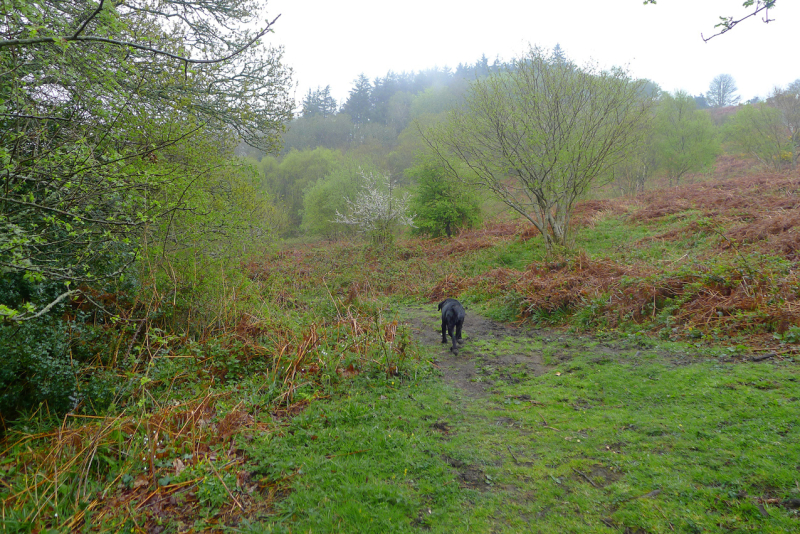 For all her love of the natural world, Solnit, a long-time city dweller, recognizes that a city traversed on foot can be just as creatively inspiring as a woodland path or wilderness trail, at least for those open to its rhythms; for those who are paying attention.

"There is a subtle state most urban walkers know," she writes, "a sort of basking in solitude -- a dark solitude punctuated with encounters as the night sky is punctuated with stars -- one is altogether outside society, so solitude has a sensible geographical explanation, and there is a kind of communion with the nonhuman. In the city, one is alone because the world is made up of strangers, and to be a stranger surrounded by strangers, to walk along silently bearing one's secrets and imagining those of the people one passes, is among the starkest of luxuries. This uncharted identity with its illimitable possibilities is one of the distinctive qualities of urban living, a liberatory state for those who come to emancipate themselves from family and community expectation, to experiment with subculture and identity. It is an observer's state, cool, withdrawn, with senses sharpened, a good state for anybody who needs to reflect or create. In small doses, melancholy, alienation, and introspection are among life's most refined pleasures.

"Speaking as a Londoner, Virginia Woolf described anonymity as a fine and desirable thing, in her 1930 essay 'Street Haunting.' Daughter of the great alpinist Leslie Stephen, she had once declared to a friend, 'How could I think mountains and climbing romantic? Wasn't I brought up with alpenstocks in my nursery and a raised map of the Alps, showing every peak my father had climbed? Of course, London and the marshes are the places I like best.' Woolf wrote of the confining oppression of one's own identity, of the way the objects in one's home 'enforce the memories of our experience.' And so she set out to buy a pencil in a city where safety and propriety were no longer considerations for a no-longer-young woman on a winter evening, and in recounting -- or inventing -- her journey, wrote one of the great essays on urban walking." 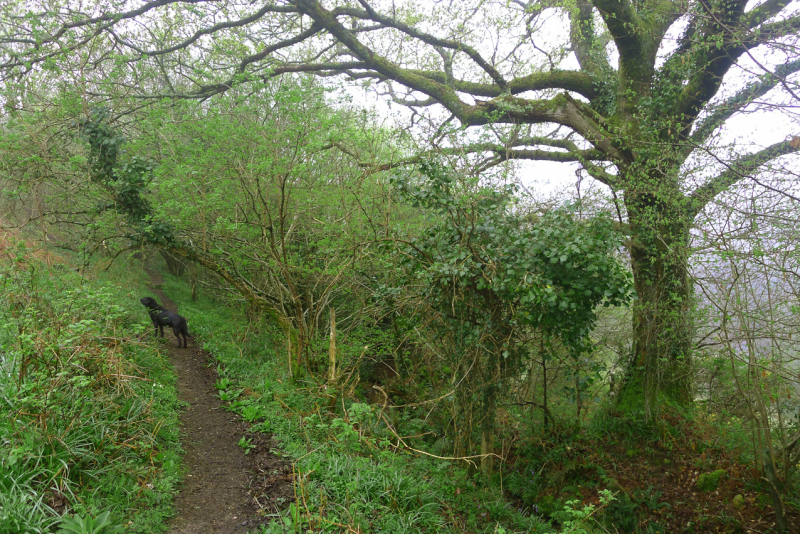 Whatever landscape we inhabit (urban, suburban, rural, or other), walking and re-walking the land or neighborhood each day confirms our place in it, deepening our connection to the more-than-human world and expanding our concept of home. 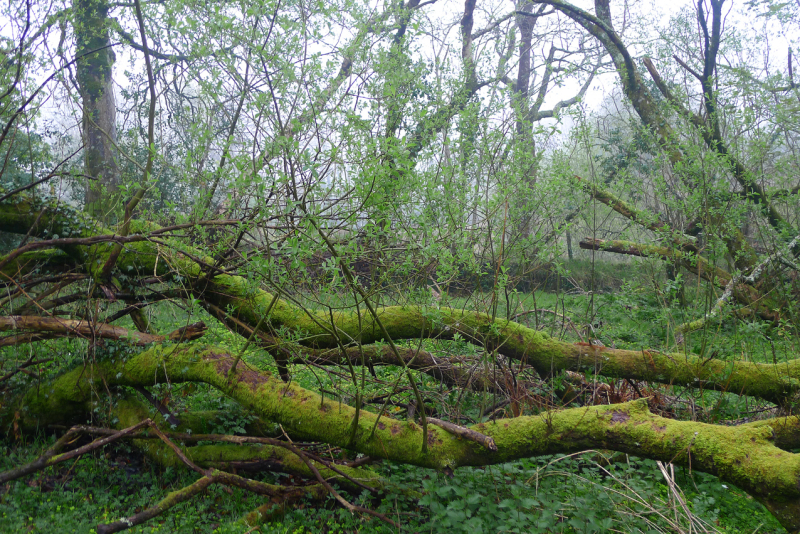 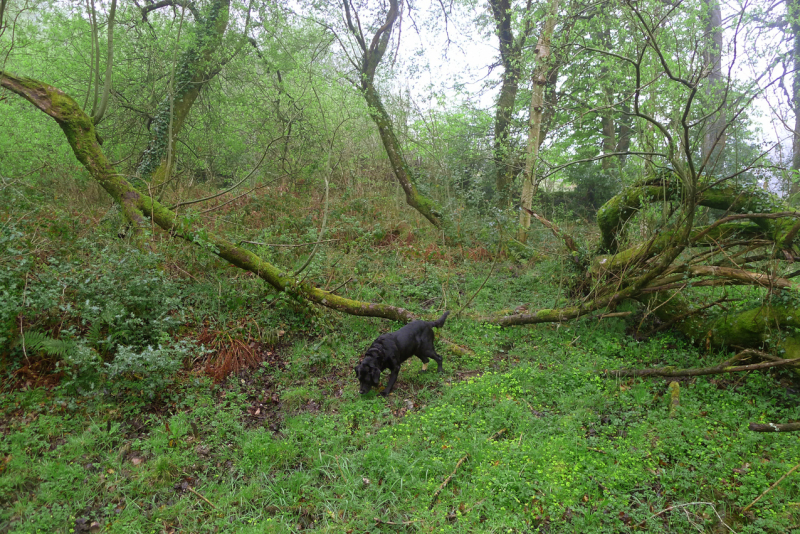 When I look at the way that Tilly takes in the world, "inside" and "outside" are alike to her, with only the annoyance of human doors between them. Nattadon Hill is home to Tilly . . . and I mean all of the hill, from top to bottom: its Commons, its woods, its tumbling streams, the brown bracken slopes, the green farmers' fields, and our warm little house on the woodland's edge. It's all home to her, both the land that is "ours" and the larger landscape that is not. 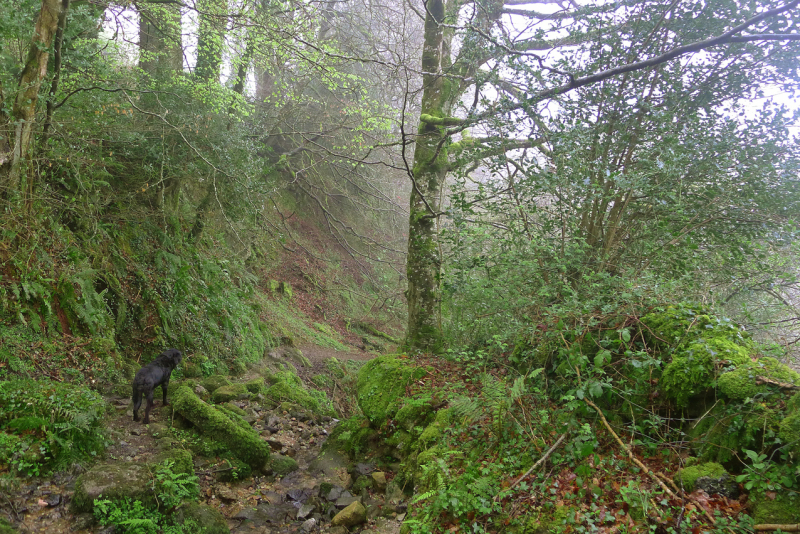 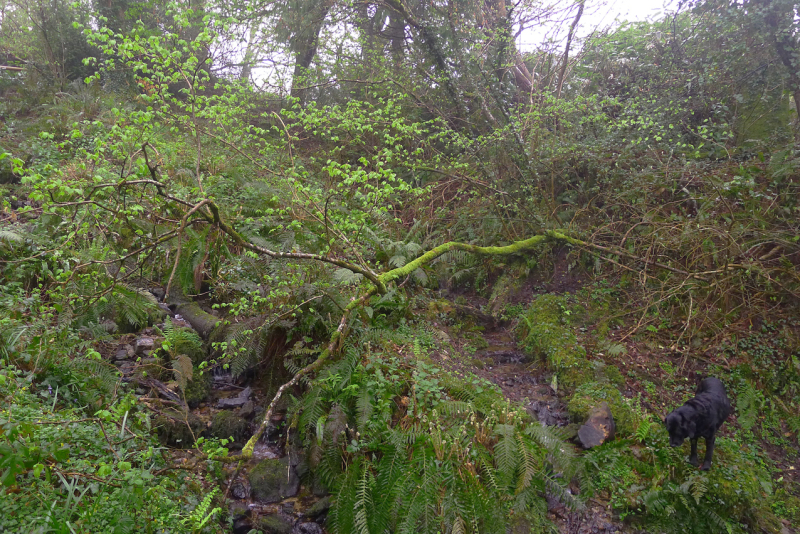 And perhaps I'm not so different from Tilly. I have walked this hill day after day, season after season, year after year, and it has become my home ground too. The concept of "home" is complex for me (being the woman that I am, with the history that I have), but the weather that sweeps across the hill has pared that concept down to essentials:

Home is a house that I share with my loved ones. It's a landscape walked with a good black dog. It's a hill that knows my particular footsteps, and a wood where the trees all know my name. It's as simple and as solid as the earth below . . . but also fragile, ephemeral, therefore all the more precious. Like life itself. 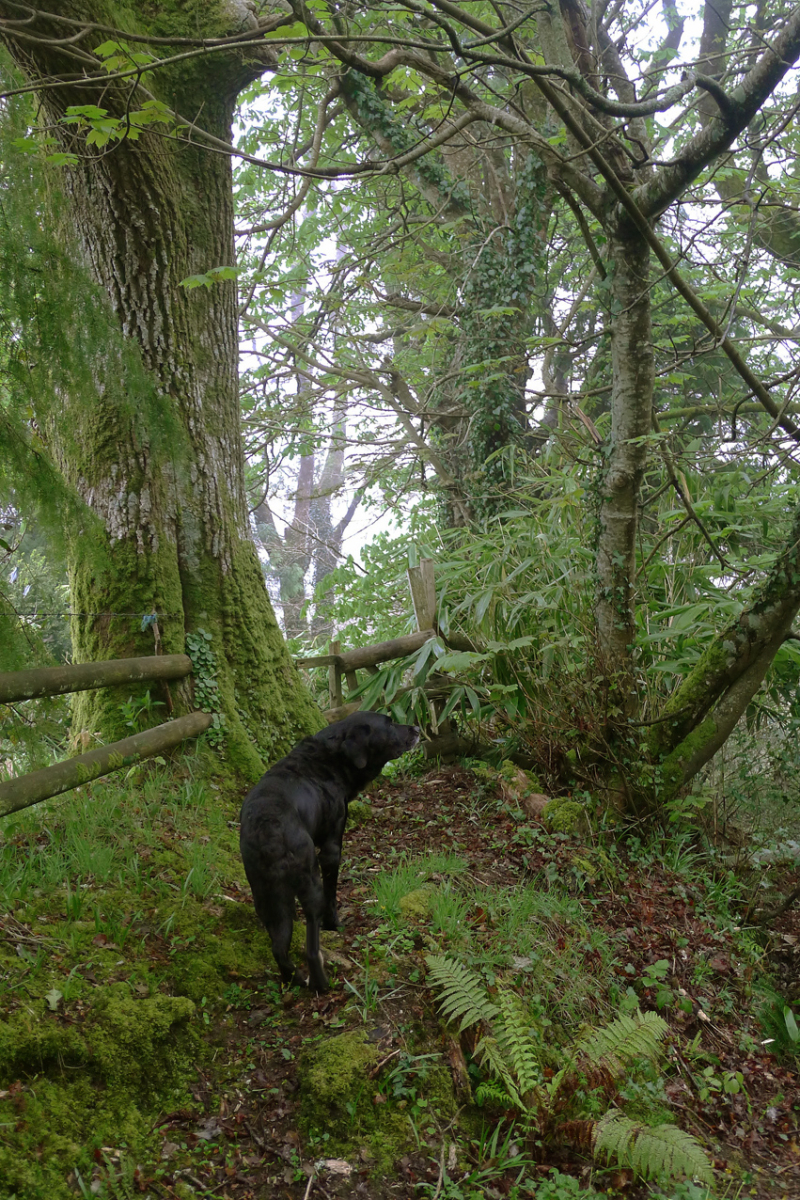 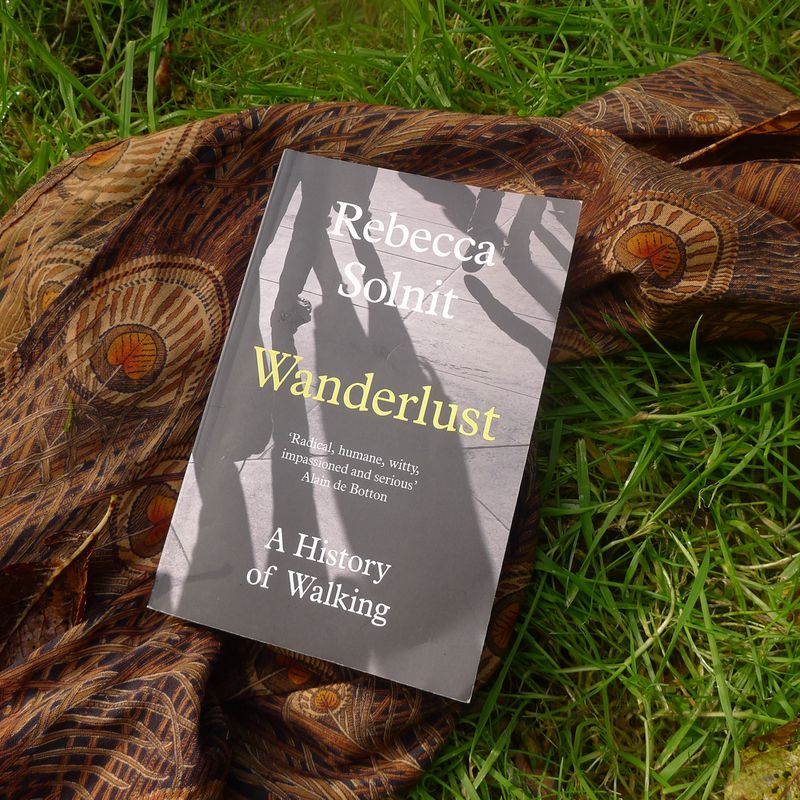 The passages quoted above are from Wanderlust by Rebecca Solnit (Penguin, 2001); all rights reserved by the author. The drawing is by New Zealand illustrator E.M. Taylor (1906-1964).

in Recommended reading, Thoughts during a pandemic lock-down | Permalink | Comments (7)

I find there is something about walking with a canine companion that makes a walk deeper, more enriched somehow. As you say of Tilly, a dog takes everything in, bathing the senses in the landscape. There is also, by way of snuffling and rolling and marking and barking, a conversation of sorts that goes on between dog, land, and all the things that live upon the land. Dogs, I suppose, have fewer barriers up than we humans tend to keep. And when you walk with a dog, your eyes, ears, and nose are alerted to all the different dialogues going on around you and within you. For me, a dog's padding paws and twitching nose tell stories that reach me not through words, but through sensations. A walk with a dog is always a delight. I never fail to see something I would have otherwise missed, and that external observation often leads me to some internal discovery that would have otherwise remained buried under the ever-growing detritus of my brain.

What a gift your post are, Terri! I feel as if I've been on a magical walk with you and Tilly in the heart of a Devon springtime!

Walking itself is the intentional act closest
to the unwilled rhythms of the body,
to breathing--Rebecca Solsnit

we walk, the black dog and I,
she so attuned to that
"intentional act"
she does n not need to know
what it is called.
She attends to her world'
with nosy occupation:
the sharp smell of dung,
the softness of dandelion
on the wind,
the difference between the scents
of birch and oak.
She knows without training
which green thrusts of grass
can calm an aching stomach,
which makes her vomit up bile.
While we are the same age
in dog years, I needed
to find "intentional act"
and "unwilled rhythms"
in a book, while she
found their essence
along the path,
knowing the difference,
adjusting her breath,
from the bluebird
on the overhead wire,
to the redtail in its stoop.

Solvitur Ambulando, “it is solved by walking”. This phrase resonates deeply with me. My most vivid experience of this was when I was pregnant with my second child. I was laboring in a small country hospital’s birthing room and my labor had stalled for hours. The midwife wanted to hook me up to a monitor, but I had an overwhelming desire to get outside and walk around the neighborhood. Reluctantly, she said ok, but don’t go too far. It was a beautiful Autumn day, fine and fair. Twenty eight years later, I still remember the plants and trees that I noticed as I walked with determination to get my labor going. By the time my husband and I returned back to the hospital, I was waddling. The baby had dropped and I was having regular contractions. Emily was born within the hour.

For me, walking is a moving meditation, part of my writing discipline without which story cannot easily happen. Wherever we go (and we go a lot of places), I walk to learn where I am and what I feel about it and what stories I might want to tell about it some day.

So beautiful, Jane. Thank you.

Does anyone else go for walks 'as a character'?
Asking for a friend.