Tunes for a Monday Morning
Telling the holy

Somewhere over the rainbow... 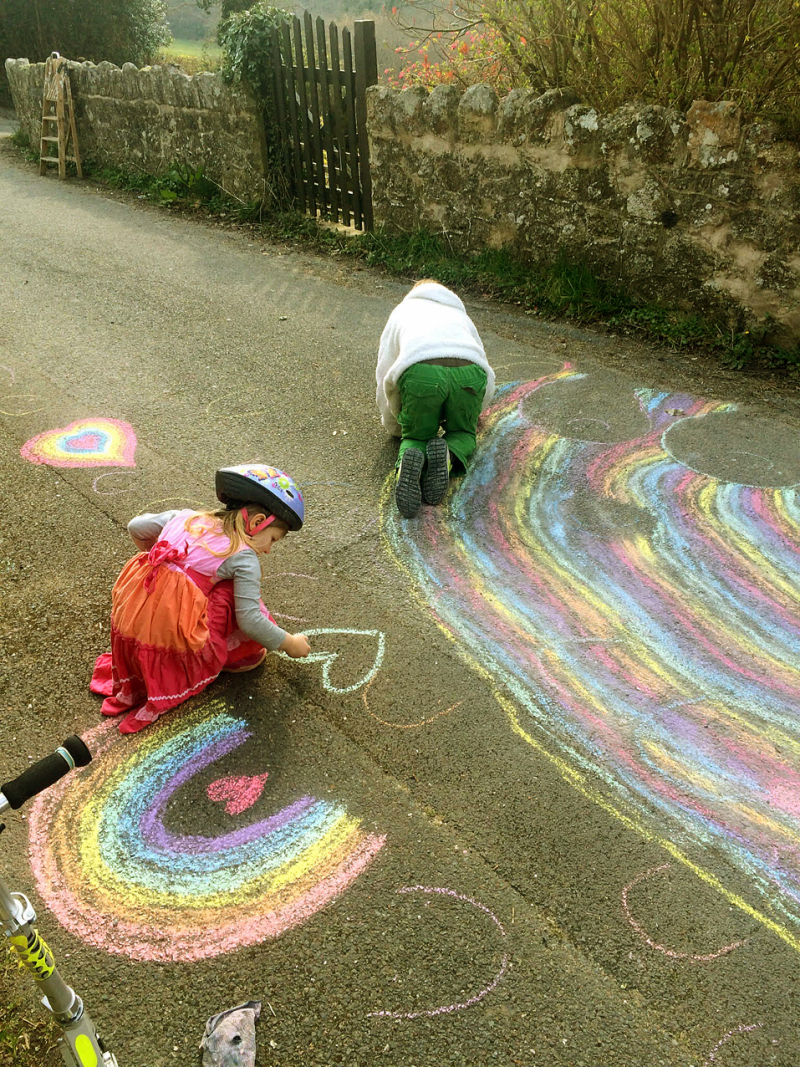 Rainbows are proliferating in Chagford, as in many other parts of the world as well. Primarily drawn by children, they are a means of spreading cheer during the global pandemic, of expressing gratitude to our health workers, and of reaching out to friends and neighbours when social restrictions keep us physically apart.

The rainbow response to Covid-19 was begin by a group of mothers in northern Italy and then quickly spread to other virus-stricken nations, helping children to deal with all the stresses and changes that a medical lock-down has brought to their lives. In the UK, much of the rainbow art is addressed to our National Health Service, valiantly struggling to keep up with pandemic's demands despite years of underfunding (and may that finally change). The NHS was already associated with rainbow symbology due to the Rainbow Badge initiative begun last summer, affirming support for the LGBT community in hospitals all across Britain. The rainbow badges worn by health service staff now have double meaning, both of them poignant.

Here in Chagford, our days of pandemic lock-down have been brightened by two young artists who live down our road, creators of the gorgeous rainbow drawings pictured in this post. This wonderful artwork makes me smile every time I go past on my walks with Tilly -- and thus the rainbows are doing exactly what they're intended to do: lifting spirits, and reminding us that even in Covid-19 isolation we are still a community. 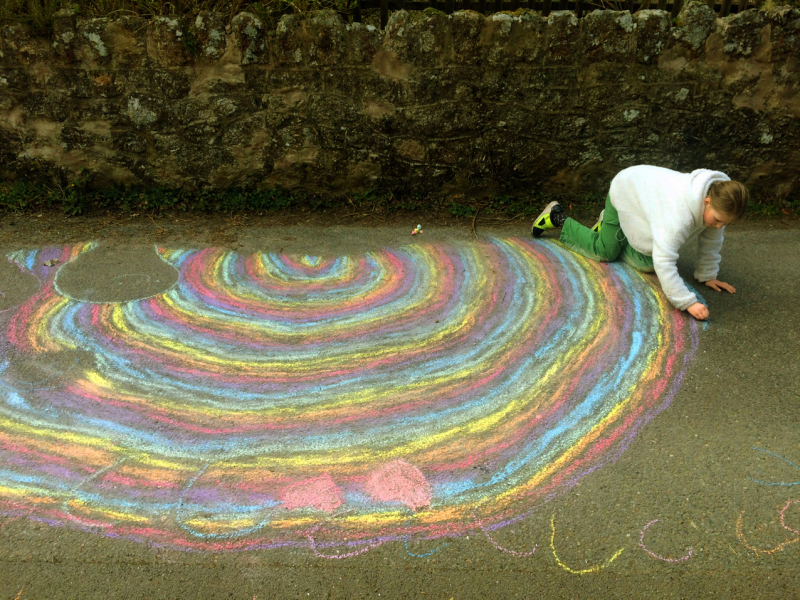 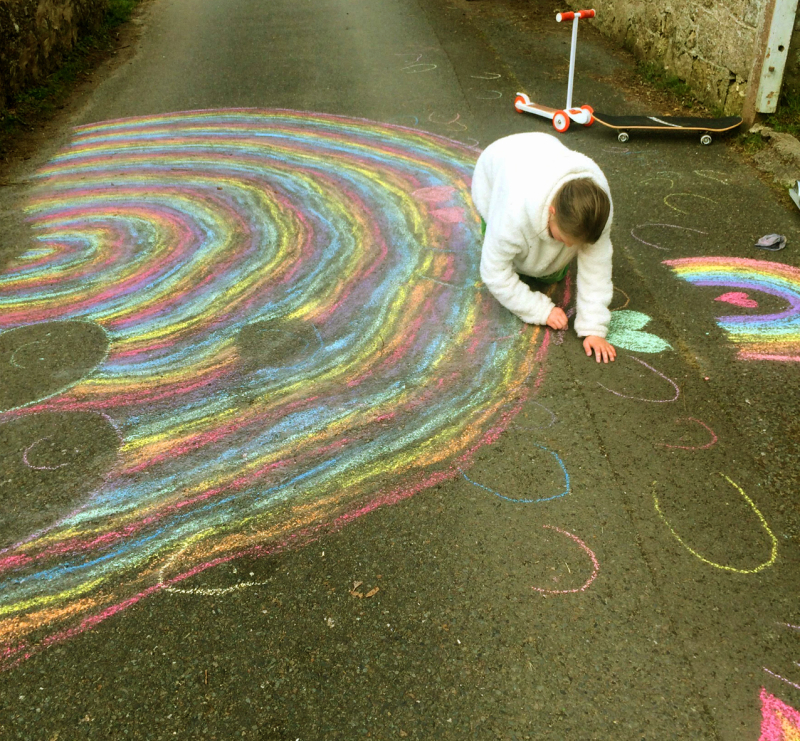 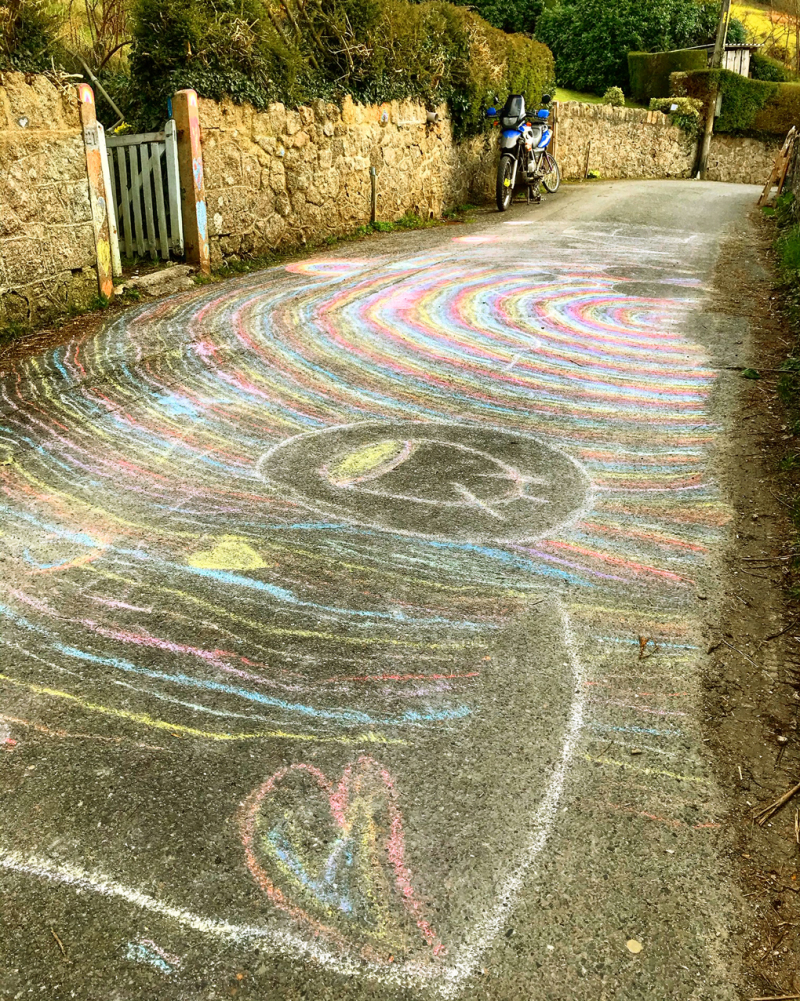 In myth and folklore, the symbolism of rainbows shimmers with elusive enchantment. Mysterious and ephemeral, appearing and disappearing in the blink of an eye, rainbows in stories around the globe are magical pathways to Somewhere Else: the spirit world, the Faerie realm, the lands of the dead or the palaces of the gods. 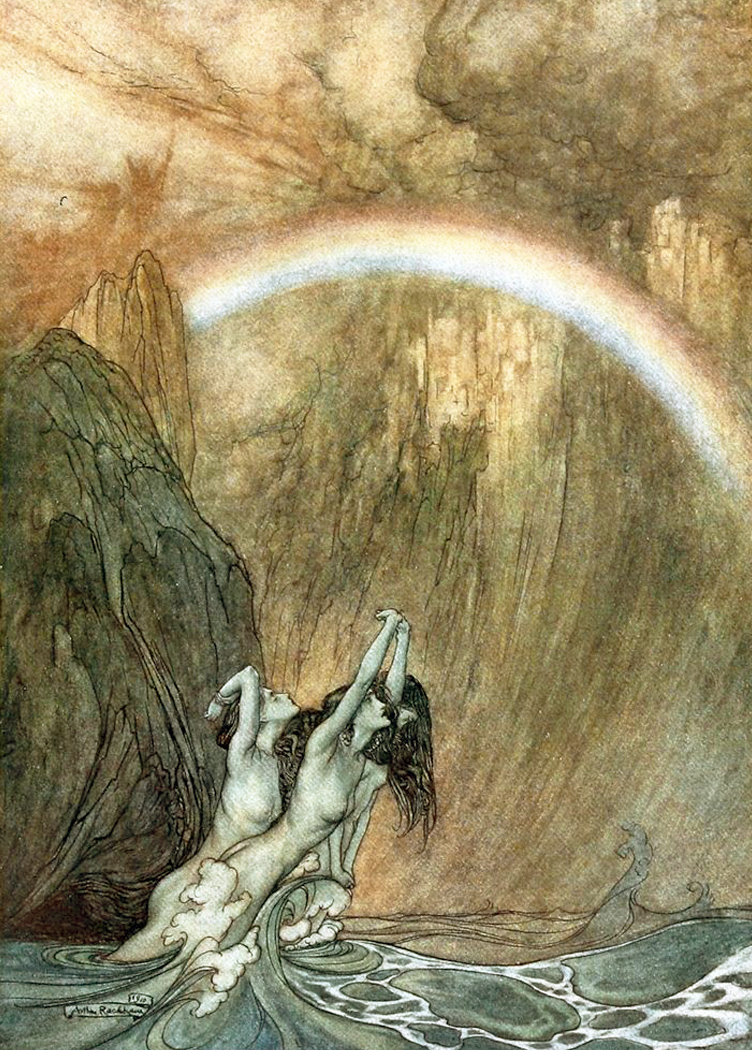 In Norse myth, Eddic Bifröst is a rainbow bridge built by the gods themselves, leading to their home in Asgard. Heimdallr, with his Gjallarhorn ("yelling horn") stands guard at the place where the flaming rainbow bridge meet the clouds. Its heat is what keeps the frost giants out -- but at Ragnarök the tri-coloured flames will cool, and the bridge into Asgard will stand open.

In Greek myth, the rainbow is personified as Iris, daughter of Thaumus (an ocean god) and Electra (a sea nymph), married to Zephyrus (god of the west wind). Iris prefigured Hermes in her role as the messenger of the gods, moving swiftly and easily between the mortal, immortal, and deathly realms. She has golden wings, which light the way on her passages through the underworld, and a coat of many colours, with which she creates the rainbows she travels on. Accordingly, the sight of a rainbow tells you that Iris is passing by. 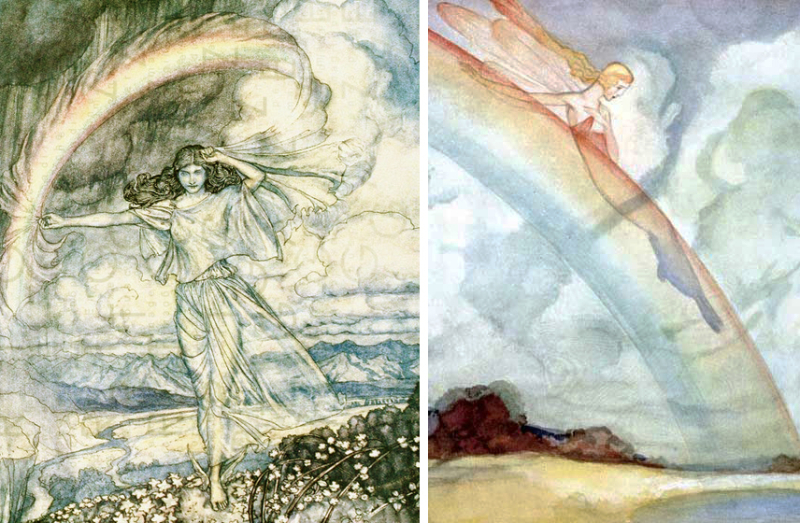 The "rainbow serpent" is a sacred figure in disparate cultures around the world, from the indigenous peoples of North and South America to equatorial Africa, Australia, Malaysia, and ancient Persia. In Arabian tales, various gods, djinns, and culture heroes carry bows or swords made of the rainbow's colours; in Siberian lore, all rainbows belong to the thunder god, forming his hunting bow; while in Slavonic myth, rainbows make up the tri-coloured belt of the Mother Goddess (or, later, the Virgin Mary).

In Irish folklore, following a rainbow to its end leads to a pot of faery gold, while here in Devon it leads into Faerie itself -- but this is rarely depicted as a wise journey for a mortal man or woman to make. Leave it to the hares, who are quick enough to carry the Faerie Queen's messages on an unreliable road made of magic, raindrops, and light. Or, if you must travel over the rainbow and into the Good Folks' realm, be sure to carry salt or hawthorn berries in your pocket to bring you back home again. 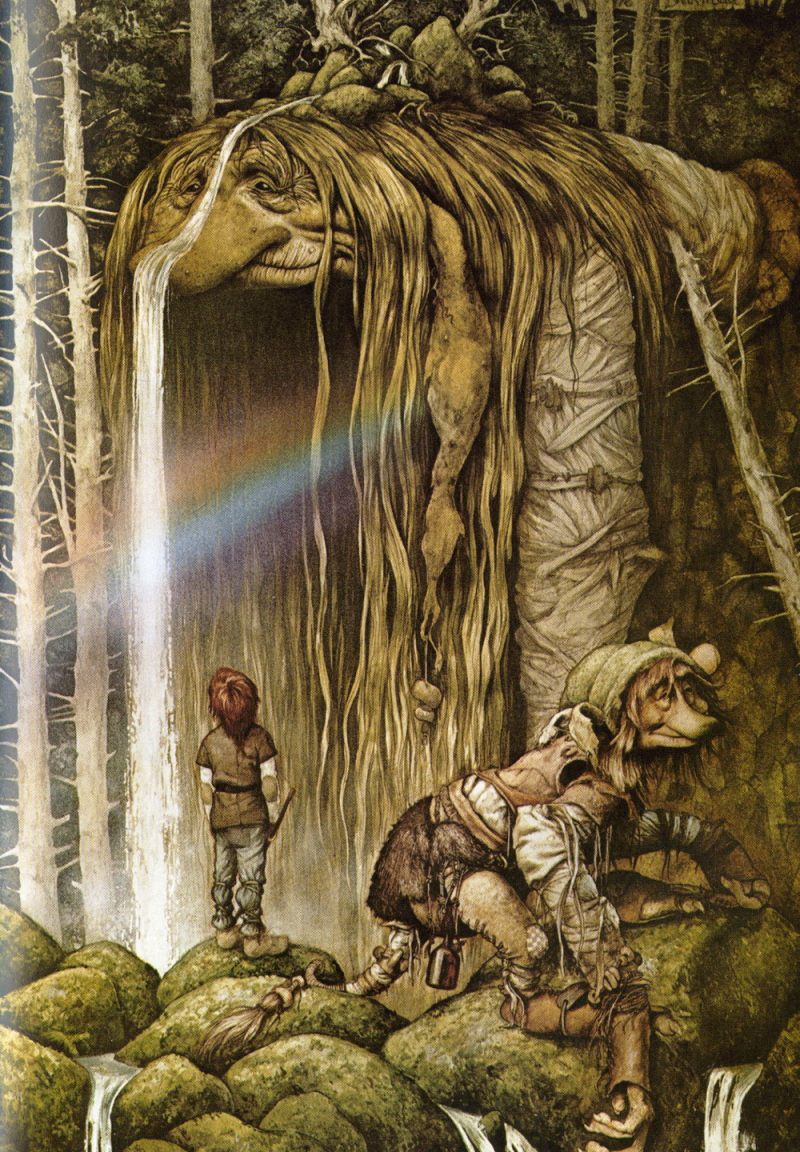 In addition to traditional stories and legends, we all have our own personal lore and symbolism, accumulated throughout lives. Rainbows are part of my own mythic iconography, and this is the tale:

When I was 15, I sat in despair one day in a creaky old bus that was winding its way through central Mexico (that's another story), trying to decide if I truly believed in God. Not necessarily God with a big white beard looking down from a Biblical heaven, but some kind of sacred spirit above, beneath, and within all things. I'd aways had a deep, instinctive faith, even as a small child, in a sacred dimension to life, a Mystery I didn't need to fully define in order to know it, feel it, experience it. But recent gruelling events had shaken my faith and closed that connection.

I realize that sitting and railing at God is a perfect cliche of teenage angst -- but that doesn't make the experience any less urgent at age 15, and I was in a dark place. "Okay," I said, throwing the gauntlet down to whatever out there might be listening, "if there is something more than this, then prove it. Just prove it. Or I quit."  The bus turned a corner on the narrow, dusty road, and a gasp went up from the people around me. Above us, a rainbow arched through a bright blue, cloudless, rainless desert sky.

Rainbows have been special to me ever since. I know the scientific explanation, of course, water and air and angles of sunlight and all that. But to me, they are always a message. They say: "The universe is a Mystery and you're part of it."

And sometimes that's all I need to hear; that's all the answer I need, no matter what the prayer. 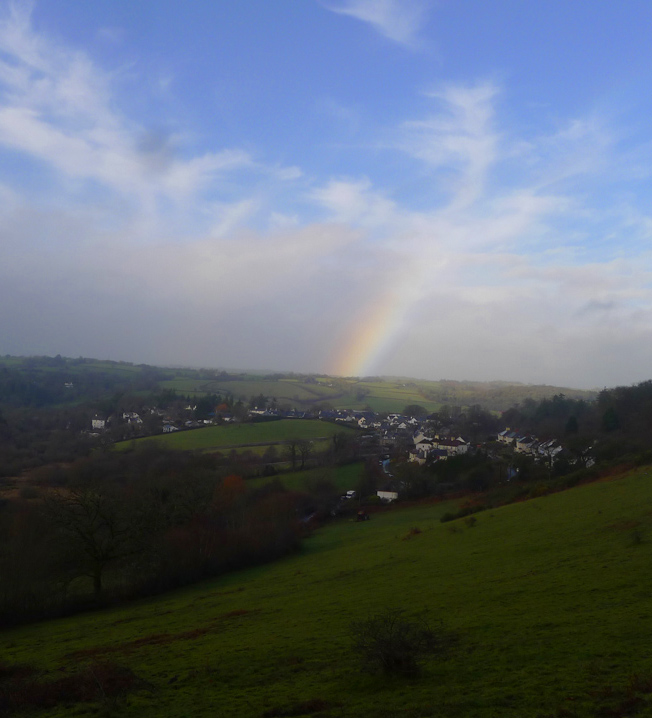 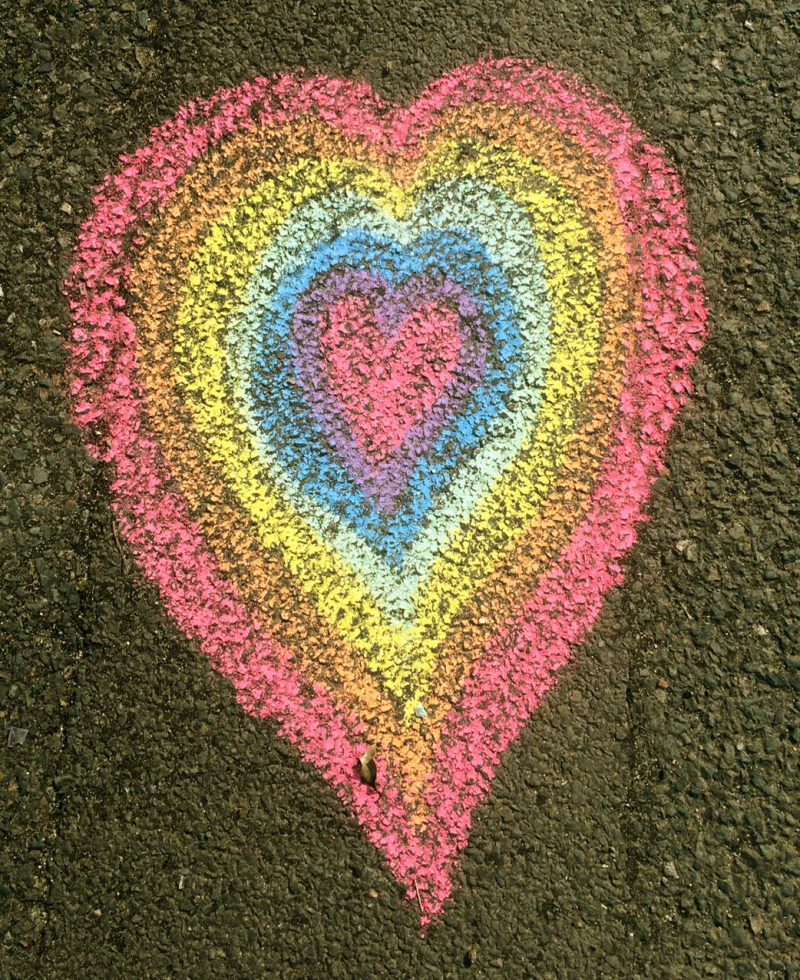 The rainbow drawings on our road were photographed by Lunar Hine (editorial assistant here at the Bumblehill Studio) -- all except for the fourth photograph, which was taken by Claire-Shauna Saunders. I'm grateful to both of them for allowing me to use their pictures.

Lunar's daughters are the street artists -- and I'm grateful to them as well, for creating such beauty in troubled times, and sharing it with all of us.

The illustrations, in order, are: Rhinemaidens (under the rainbow bridge to Asgard) and a rainbow nymph by Arthur Rackham (1867-1939). A rainbow fairy by Willy Pogany (1882-1955). The Rainbow Serpent in a design from Aboriginal artwork (artist unknown). And a rainbow image of our local Dartmoor trolls by Brian Froud -- who knows them better than anyone.

in Myth & folklore, Rainbows, Thoughts during a pandemic | Permalink | Comments (6)

What a lovely collection of rainbows!!

Marcia and I have been together for more than 25 years, and we were just friends for nearly two years before we realized that just wasn't going to work out...

At one point in the early days I was doing a lot of work from low-altitude aircraft and one day we weren't too far into our flight when the clouds just clamped down around us. We turned around and were limping back to the (small, regional) airport at 100 feet and 100 knots, peering through the windshield and doing our best to avoid towers and hydro lines when all of a sudden we burst out of the clouds and there was this magnificent rainbow in front of us.

After we got back on the ground and settledxI walked into the terminal, picked up the payphone and called Marcia's office: "Hi Marc, it's me. Listen, I was just up with J. and we were cutting through some low level-scud when..."

"YOU GOT MY RAINBOW!!" she exclaimed.

How can you not love a woman like that?"

I wrote this for her: https://www.wolfnowl.com/stories/mikes-stories/rainbow-weaver/

We were in a difficult place,
you still frail and cranky
from the radiation,
I still exhausted from your fight,
our flight to Scotland.
We did not want to flaunt
our luck, our blessings.
For now there were no signs,
only residue that like Red Caps,
or Scottish goblins,
lurking in the undergrowth,
grumbled about the long wait.
We went to an old favorite pub,
ordered food which you might
or might not eat. Held hands.
Looked out the window.
There, there--
over the Isle of May
not one rainbow but two.
And even as we marveled,
a third, like a faint
striped shadow, hovered
above them all.
The ghosts of monks,
Vikings, bird scientists
cheered from the island
where five years later
some of your ashes
would join their chant.

How beautiful! They are here, too, smaller and mixed with hopscotch and simple maths problems (? we all have our joys). Also the salt-and-hawthorns just solved a problem in a story I'm working on, so thank you!

A place where dreams really do come true...the other side of a rainbow, where of course, scientifically speaking, you can't see the rainbow because it's not the correct lighting refraction...but oh, what a wonderful mysterious place it must be...where you live in your dreamtime.

Lovely, Terri. 4yo and I have been crawling around the road drawing more just this afternoon :).
Rainbows seem to be a universal balm. After Thomas died there was at least one rainbow every single day for weeks. I've not seen that before or since. I don't believe in a god, but I believe with all my might in beauty and those rainbows kept telling me, Keep going, Keep going, You will get to a day which is easier than this; You will arrive again at a place of beauty. And they were right, of course. Here I am.

I really love your storytelling here. Such a wonderful connection you've had to rainbows all this time! Can you say more about why Hawthorn berries or salt in your pocket to return from Faerie? I know Hawthorns are faerie trees, but I'm so curious about this little snippet of your post. Thank you!