The song of owls
Mozard, starlings, and the inspiration-wind 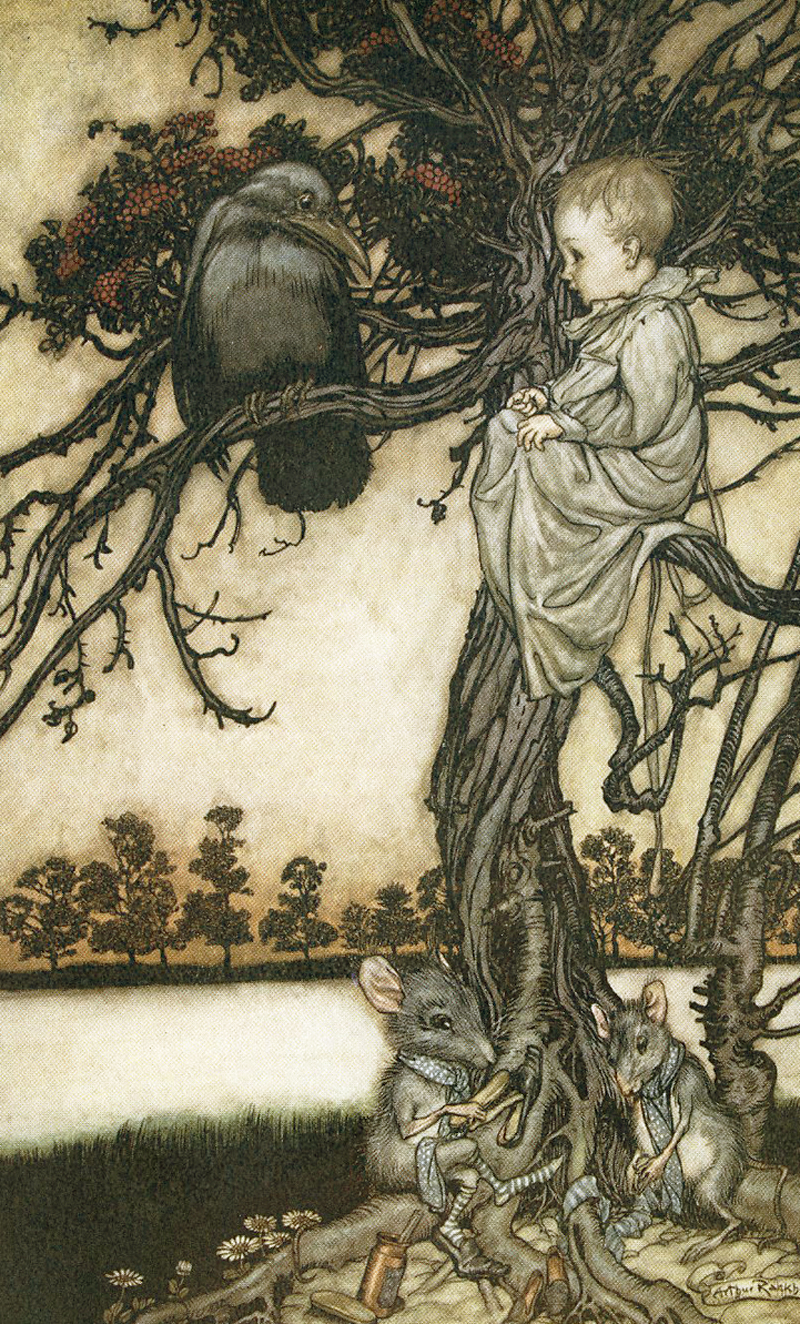 In his introduction to Beasts at Bedtime: Revealing the Environmental Wisdom in Children's Literature, Irish ecologist and poet Liam Heneghan writes this touching passage about the imaginative connection between children, birds, and animals: 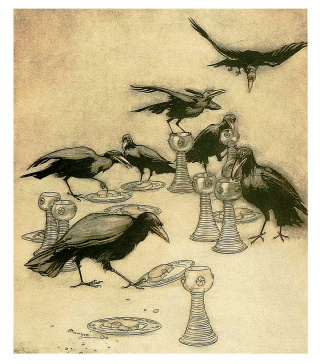 "Newly arrived in the United States and setting foot on the red soils of Georgia for the very first time, Fiacha, our eldest and then a three-year-old, perched himself on top of a fire ant mound. It's a rare child who makes that mistake a second time since fire ants sting ferociously. We had moved into a small ranch house a few miles from the campus of the University of Georgia in Athens, where I was to work for four years. The house was aesthetically unremarkable. There were parched lawns to the front and rear, both of which hosted innumerable fire ant mounds. In the front yard, right outside the door, grew two desiccated shrubs. What that neighborhood lacked in conventional wildlife it made up for with feral dogs. They howled all night and packed together in the morning, leisurely hunting the neighborhood for those who, like me, were foolish enough to go walking in the early hours. It was in this unpromising location that Fiacha -- an Irish name that means 'raven,' and whose second name is Daedalus, the father of Icarus -- became a bird. 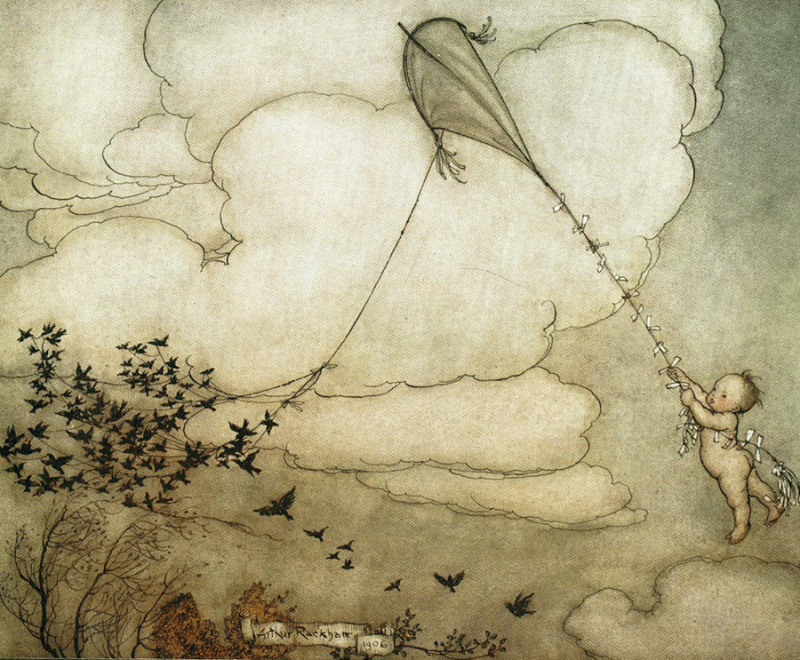 "The care and feeding of a bird who is morphologically and physically human, though psychologically somewhat avian, is not an entirely trivial undertaking. While he was in motion, there was little inconvenience to us -- he simply flapped his featherless wings as he migrated from place to place. 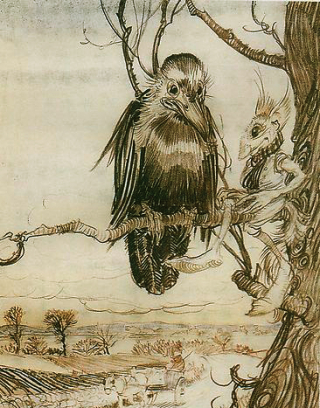 "He was something of a restless bird: now in the living room, now the kitchen, and now perched in his bedroom. Whenever and wherever he perched, the primaries on his wings would tremble, occasionally he would ruffle the length of his wings, and, at times, he would fold them back and tuck them close to his little body. We learned to live with the concerned glances of strangers. Feeding time could be a little strenuous, although we could entice him with shredded morsels that he would grab by his 'beak' and toss back into his mouth. Sometimes he would disappear from the house, and after those initial panicked occasions where we searched high and low for him, we knew he could be found sequestered in one of those forlorn-looking shrubs in the front yard. He would cling to a lower branch, peering out at the world through the patchy foliage. At least he was safely out of the reach of the packs of dogs and of the fire ants.

"In those early years, we read a lot about birds, looked at a lot of birds, and drew a lot of birds; and by sketching birds on folded pieces of paper and then cutting them out, we made innumerable models of birds. It lead to a later interest of his in dinosaurs, then aircraft, then military history, after which there was another thousand twists and turns in his interests. That bird now studies philosophy, but he remains an avid birder. He admitted to me recently that he occasionally writes with a quill. To this day if you look at him long enough, you may still spot his flight feathers flutter ever so slightly, even on windless afternoons." 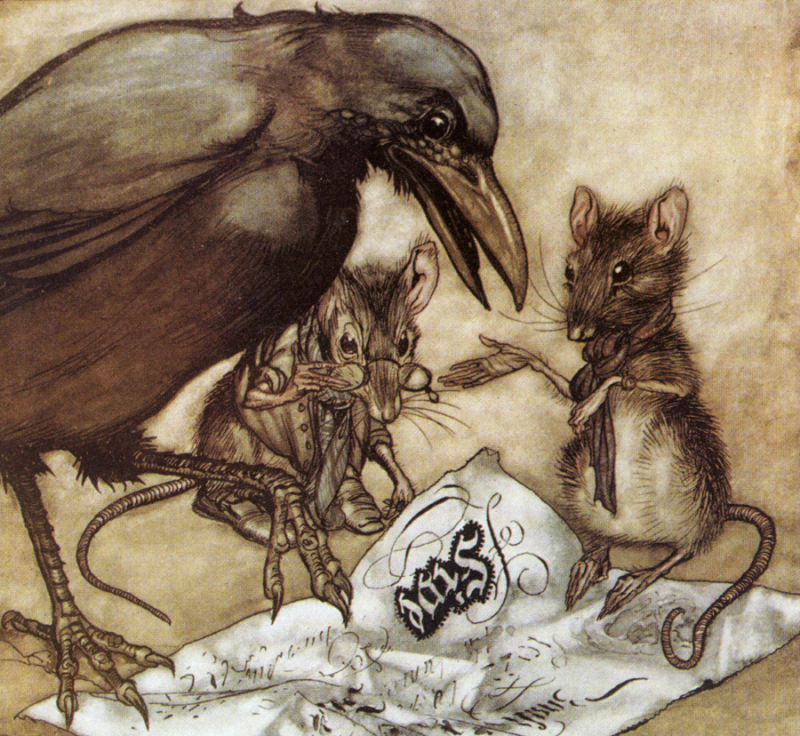 Heneghan goes on to explain that Beasts at Bedtime was written for the parents, teachers, librarians and guardians of children who might think they are birds: 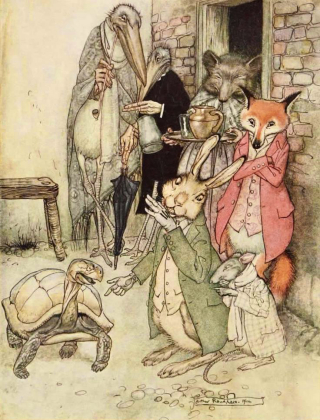 "It's possible, of course, and not at all uncommon, that your child might assume themselves to be a cat or a dog; this is a book for those families also. It's also for the family of a child I've learned of recently who alternates between a crocodile, a rhino, and a snake. When she was quite young, a friend imagined herself to be a gorilla. A child of another friend thinks he is a deep-sea shrimp that scares predators who get too close by squirting out a glowing substance. He alternates this with being a porcupine. You should give this child wide berth....

"Some children do not identify with being any animal other than the higher primates they already are. The stories that I write about here will be instructive to guardians of these children also, for it is a rare child who is not already inclined to nature.

"Central to the task of caring for your little creature is to create the most nurturing environment for them. This, quite obviously, is not as simple as attending to their peculiar physical needs. It requires a careful tending to their spirits. This later task can be assisted by the stories you tell and read to them. To help with the task, this book is intended to illustrate the thematic richness of children's stories. There is a surprising depth of environmental information in many of the titles that children find immensely appealing." 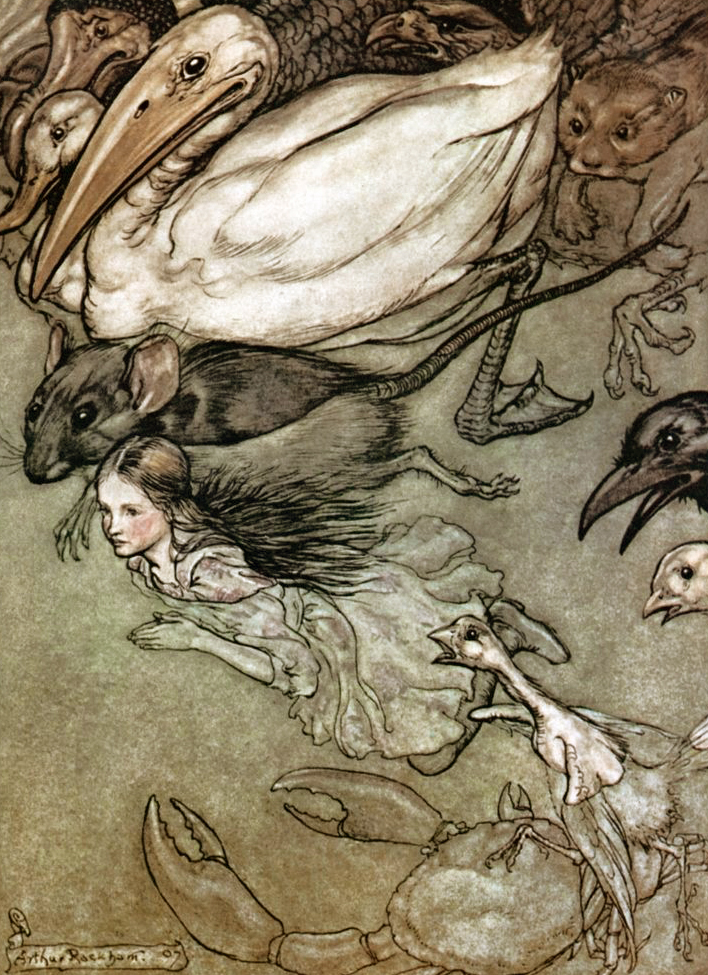 Heneghan's text covers pastoral stories, wilderness stories, urban stories, and "children on wild islands" -- ranging from fairy and folk tales to Peter Rabbit and Pooh -- and then onward to White's Forest Sauvage, Tolkien's Middle-Earth, Le Guin's Earthsea, and much more. I loved re-visiting favorite tales through the eyes of an ecosystem ecologist, and heartily recommend this charming, informative, bird-filled and beastly book. 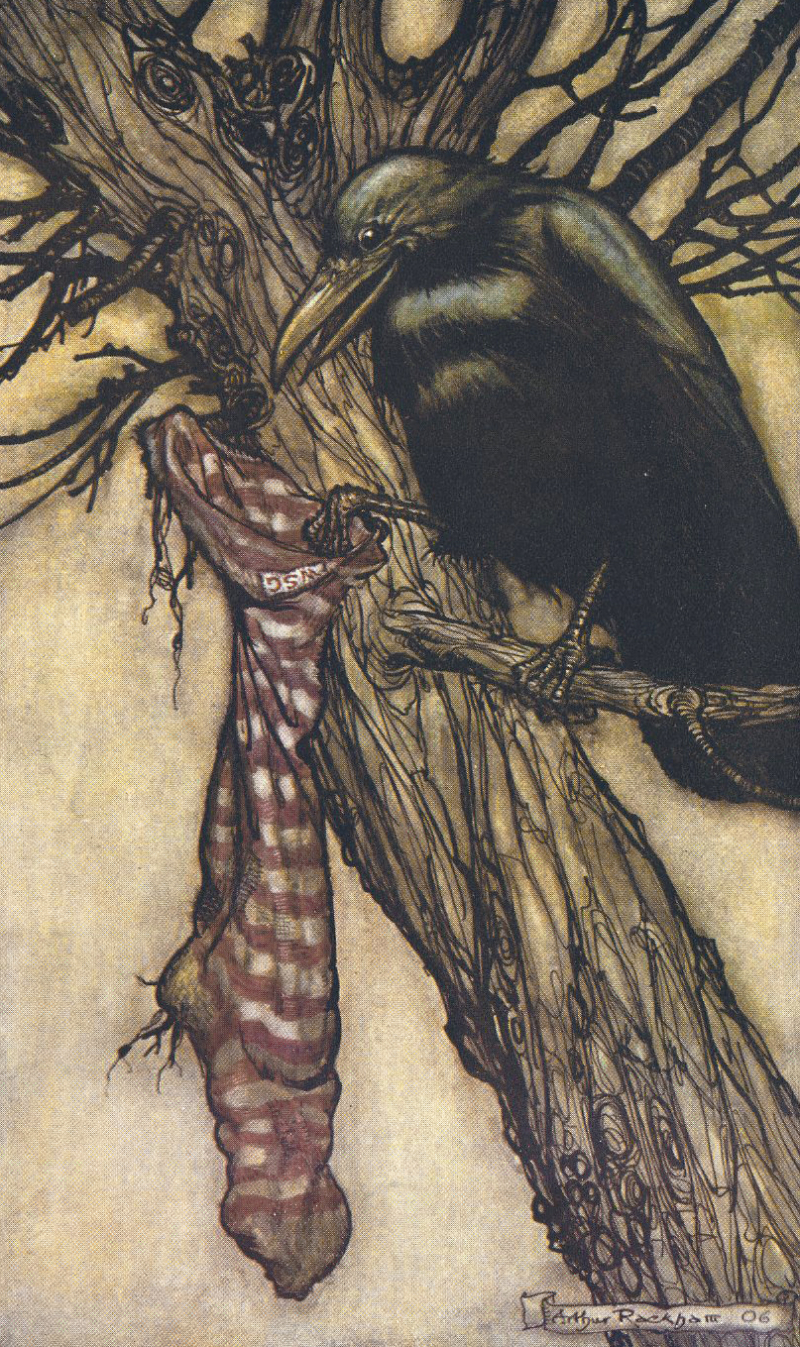 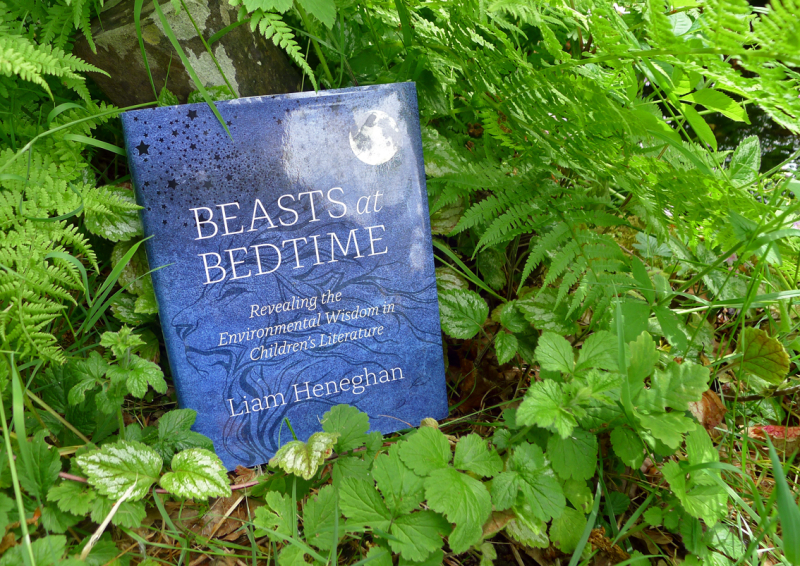 Words: The passage quoted above is from Beasts at Bedtime: Revealing the Environmental Wisdom in Children's Literature by Liam Heneghan (University of Chicago Press, 2018). All rights reserved by the author.

Pictures: The illustrations above are by the great Golden Age book artist Arthur Rackham (1867-1939), from editions of Peter Pan in Kensington Gardens by J.M. Barrie, The Fairy Tales of the Brothers Grimm, Aesop's Fables, and Alice in Wonderland by Lewis Carroll.

When I Was A Bird

Before I became a woman
with several names,
I was a wild thing,
living tree limb to tree limb,
lurking at pond sides,
yet reluctant to swim.
No noisy duck, no graceful swan,
I was more kingfisher
looking down into fathoms,
longing for notice,
considering fish,
dropping the occasional berry
into the water
to see what would rise to the bait.

Beautiful, and poignant. Thank you, dear.

I recently got out my baby books, looking for a specific clipping I remembered being tucked inside one of them. I did NOT remember that I was a butterfly for the longest time...and wanted to be called just about anything but my name, Cathy. Still feel that way about the name...

I loved this review. It really made me want to read the book.