Following the birds
When women were birds

Storks in the spring 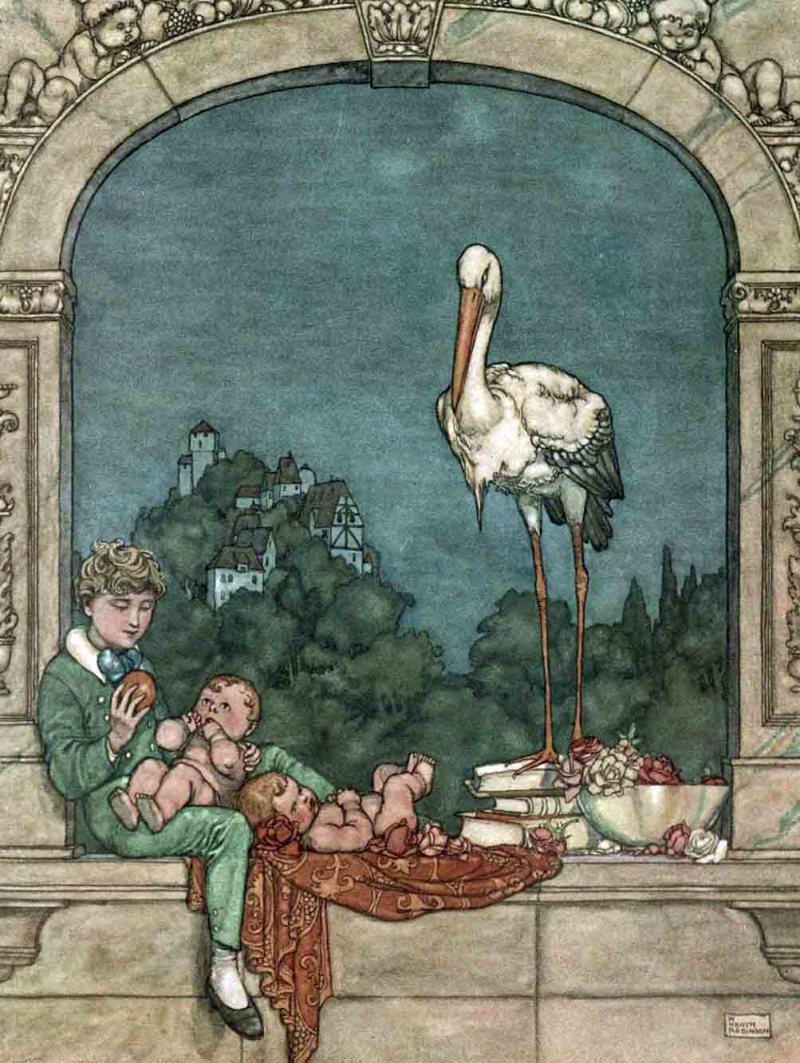 As we end our second month in the UK lock-down, here's something to celebrate: wild white storks have hatched in southern England for the first time in six centuries. Isabella Tree, co-owner of the estate where the storks are nesting, says: "There’s something so magical and charismatic about white storks when you see them wheeling around in the sky, and I love their association with rebirth and regeneration. They’re the perfect emblem for rewilding. A symbol of hope. It’s going to be amazing to have them back in the British countryside, bill-clattering on their nests in spring -- perhaps even setting up nests on our rooftops like they do in Europe. When I hear that clattering sound now, coming from the tops of our oak trees where they’re currently nesting at Knepp, it feels like a sound from the Middle Ages has come back to life."

In Zoologies: On Animals and the Human Spirit, poet and essayist Alison Hawthorne Deming tells us: 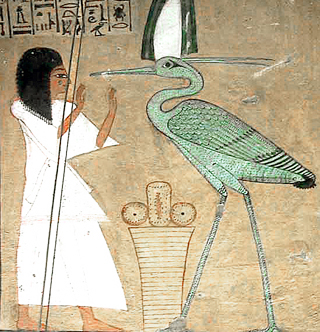 "Stork stories go back millenia, crossing the cultures that the birds have crossed in their flight along their pilgrimage through time. Stork is a hieroglyph that transcends death in ancient Egypt, where the bird is depicted as Ba, an untranslatable concept according to Egyptologist Louis V. Žabkar, who published the first extensive study of the Ba in 1947. Ba is not unlike the Judeo-Christian idea of the soul, a duality between the material and the spiritual. It is not a constituent part of the human, but 'one of various modes of existence in which the deceased continues to live.' Ba is considered to 'represent the man himself, the totality of his physical and psychic capabilities.' In gods, Ba is the embodiment of the divine powers; in kings, the  embodiment of kingly powers; and in citizens Ba is the embodiment of vital force.

"Ba has a quantum strangeness, interweaving the very notions of living and dead. It frees itself of the body at death but maintains contact. The Ba of the deceased man, depicted as a stork on the papyrus of Nebqed, flies down the shaft of the tomb to deliver food (a whole fish!) and drink to sustain his very own mummy. In this context 'living' and 'dead' conflate and confuse like 'particle' and 'wave' in the study of light. Elsewhere Bas are depicted as falcon-headed humans attending as servants or as a human-headed stork perched calmly on the arm of a scribe. But it is the image of the story as Ba flying down the shaft of the tomb to bring life-giving nourishment to the dead that owns me. The Ba flies on the papyrus on stairs that are flanked by rows of a scribes careful hieroglyphic inscriptions. I imagine the hand that inked that bird, the scribe who chose to make everything else on the page -- hieroglyphs, sarcophagus, cheetah pelt -- clear and heavily inked, while this Ba, performing the most important task of bringing the promise of the renewal to the realm of the dead, is inked with so delicate a hand that the image is barely perceptible. Such is the challenge of speaking of the 'soul.' 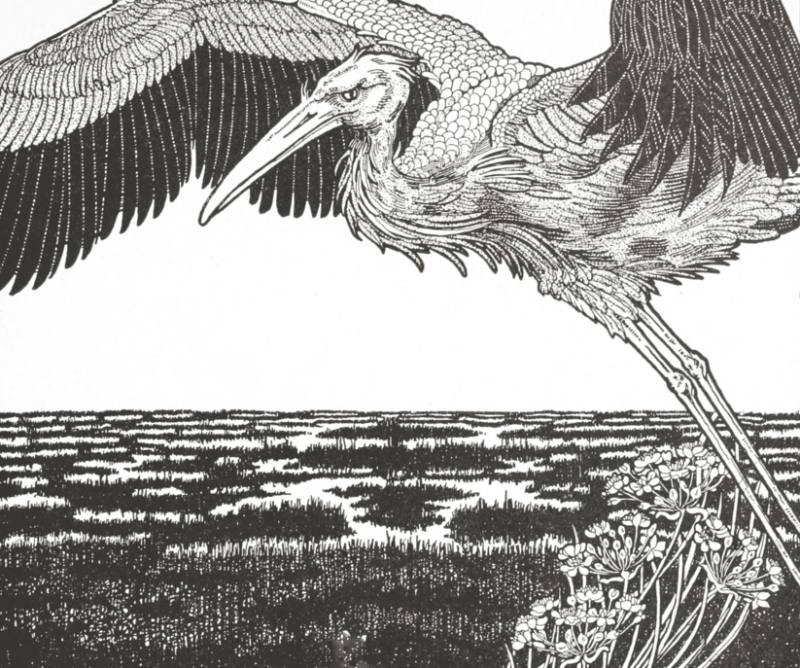 "Stork is a fable of moral instruction in ancient Greece. Aristotle wrote that 'it is a common story of the stork that the old birds are fed by their grateful progency.' Stories tell that a stork will carry an aged parent on its back when it has finally lost its feathers and is unable to fly, a lesson in filial duty. Aesop, or the unnamed scribe who gathered the tales attributed to that name, tells the tale of the bird catcher and the stork. The bird catcher has set his nets for cranes, and he watches from a distance. A stork lands amid the cranes and the bird catcher captures her. She begs him to release her, saying that far from harming men, she is very useful, for she eats snakes and other reptiles. The bird catcher replies, 'If you are really harmless, then you deserve punishment anyway for landing among the wicked.' The moral: 'We, too, ought to flee from the company of wicked people so that no one takes us for the accomplice of their wrongdoing.' This particular fable had some legal backup. In ancient Thessaly, a law prohibited the killing of storks because of their usefulness in killing snakes. 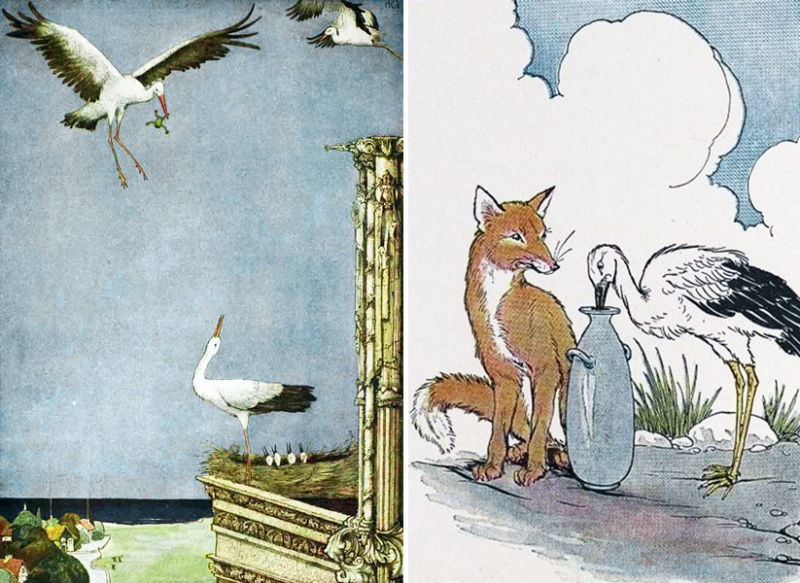 "In another Aesop fable, the fox and the stork are on visiting terms and seem to be very good friends. So the fox invites the stork to dinner. For a joke he serves her soup in a shallow dish from which the fox can easily lap but the stork can only wet the tip of her long bill. 'I am sorry,' says the fox, 'that the soup is not to your liking.' 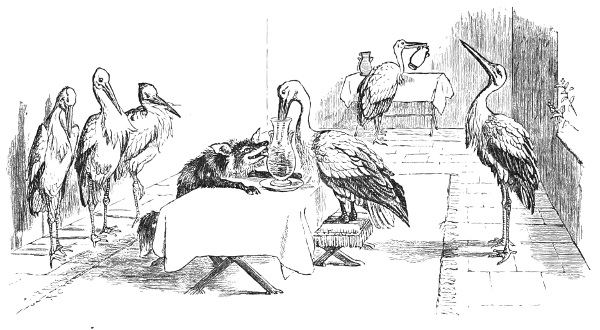 "'Pray do not apologize,' says the stork.

"She returns the dinner invitation. When the fox arrives, the meal is brought to the table contained in a long-necked jar with a narrow mouth, into which the fox cannot insert his snout. All he can do is lick the outside of the jar.

"'I will not apologize for the dinner,' says the stork. 'One bad turn deserves another.' It is a tale of skillful means. 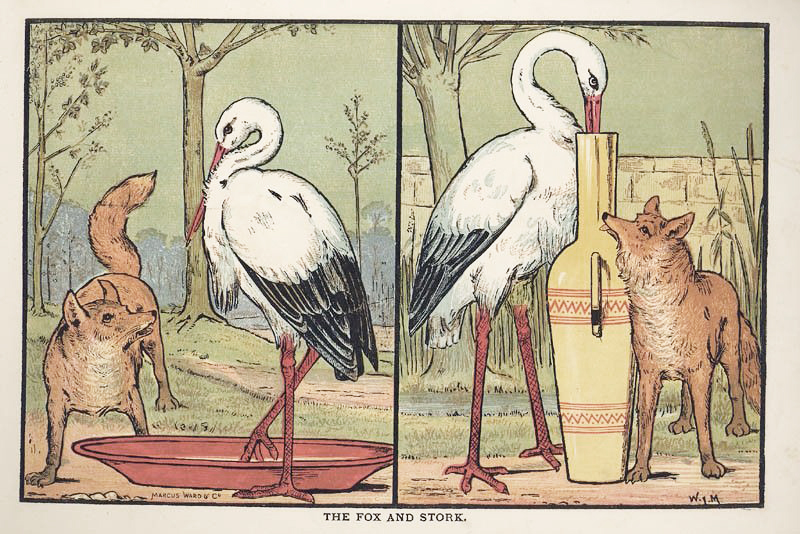 "Lessons in skillful means, or, in Sanskrit, upāya, come from Mahāyāna Buddhism, a school of Buddhism that originated in India. And it is no surprise to see the spirit of ancient India embodied in an ancient Greek fable, because Aesop gathered stories from the same sources as did The Panchatantra, India's age-old treasure trove of animal stories that came up through the oral tradition and were first recorded some fifteen hundred years ago. This tradition influenced Aesop's and La Fontaine's fables, the tales of the Arabian Nights, and Chaucer's Canterbury Tales. They are stories of 'wise conduct' meant to 'awaken the intelligence.' Storks and stories share the same migratory urge. 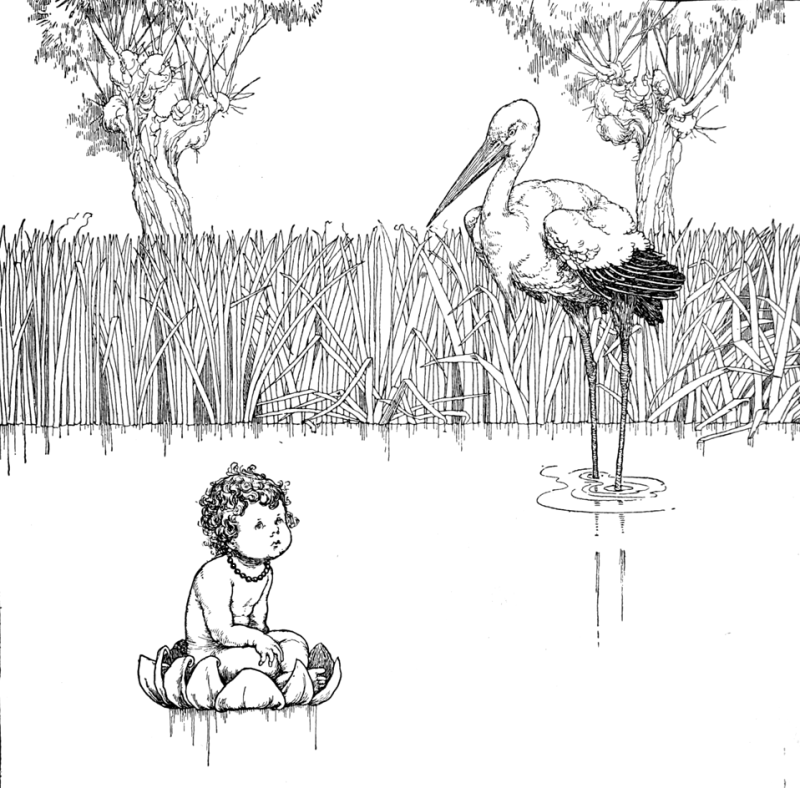 "Storks in the great American marketplace carry forward one of the most pervasive associations with the bird: its relationship to the arrival of human babies. Baby announcements, greeting cards, wrapping paper, baby lawn ornaments and diaper services all boast the brand. Stork carries a newborn in a downy sling draped from its long bill. German folklore tells that storks find babies in caves or marshes then carry them in baskets on their backs or in their beaks into human houses. Sometimes the babies are dropped down the chimney. If a baby arrives disabled or stillborn, the stork may have dropped it on the way to the house. Households could leave sweets on the windowsill to give notice they wanted a child. Slavic folklore tells of storks bringing unborn souls from the old paradise of the pagan religion in spring.

"In spring, white storks, flying from Africa and over Mecca, arrive in eastern Europe during the season when the old pagan fertility rituals of pole dancing and wreath strewing and forest coupling would be performed. Call it synchronicity that great and graceful white birds would arrive and join the joviality each each year, making it easy for imagination -- that great coupling force between inner and outer reality -- to fuse the bird with the love of life and promise of resilience that is what spring means and has meant in temperate climes for aeons." 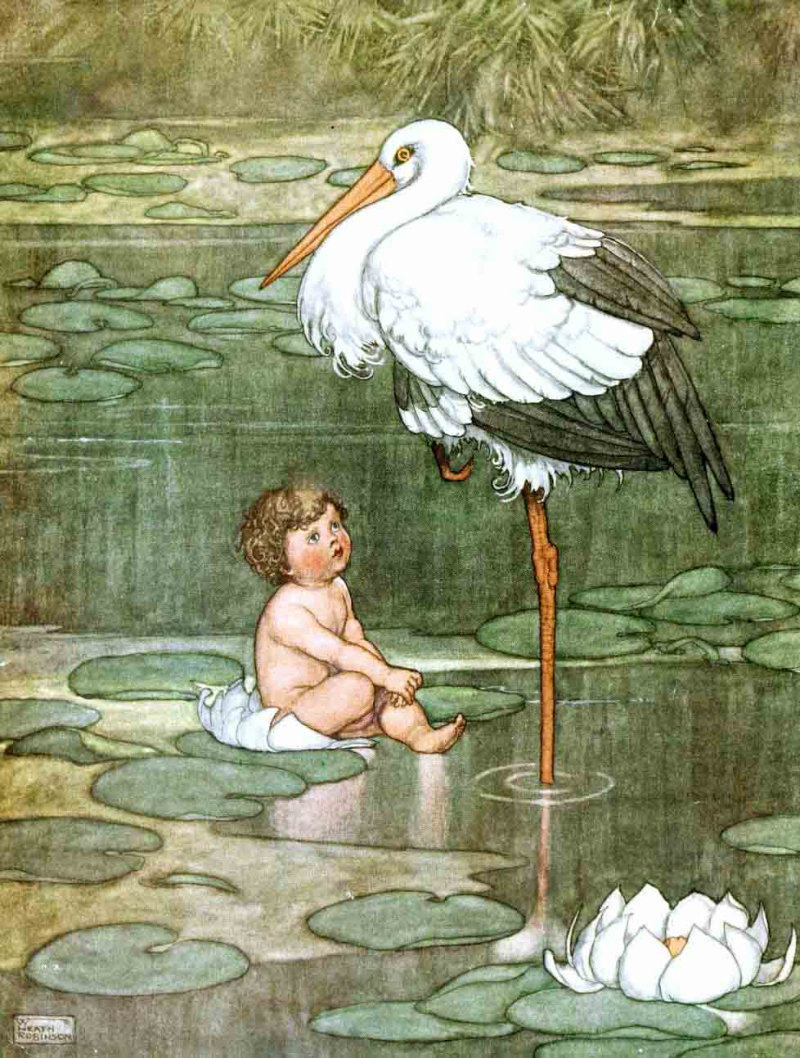 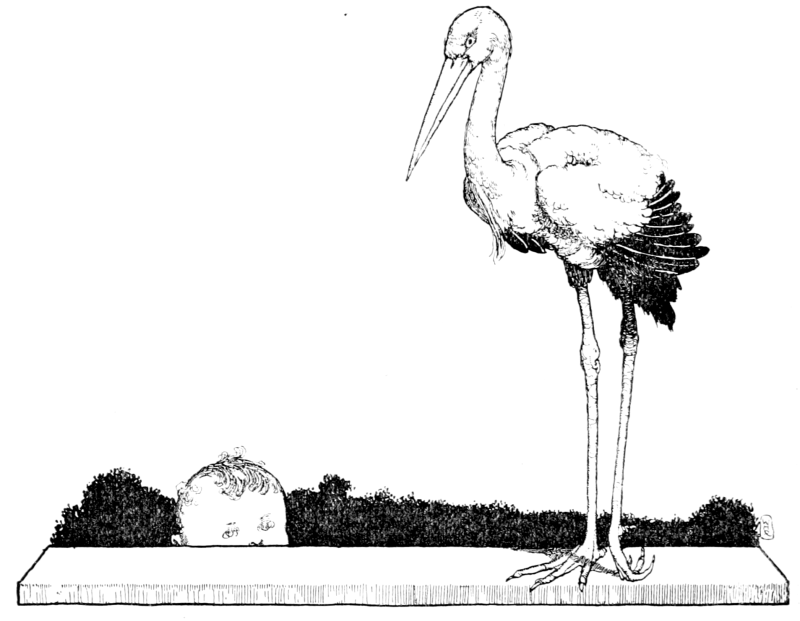 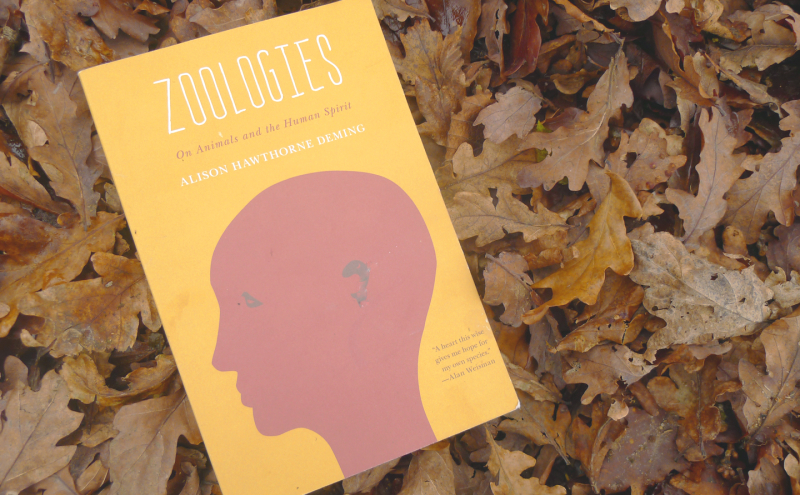 Words: The passage above is from  Zoologies: On Animals and the Human Spirit by Alison Hawthorn Deming, whose gorgeous work comes from the edgelands between the arts and sciences. Zoologies was published by Milkweed Editions (2014); all rights reserved by the author.

For everything a Season: A Valentine
“wild white storks have hatched in southern England
for the first time in six centuries—Terri Windling
The wheel of time,
White angel wings,
Old storks remind us
Of such things.

There is a season
Life, then death.
As long as I
Have cogent breath

These things I know,
To be still true.
As long as life,
I do love you
.

What a beautiful poem, the sentiments and tribute to the magic and wise presence of storks. I also love the use of rhyme adding to
the lyricism of this lovely piece!

Thank you for sharing
Take care, my best to you and yours!
Wendy

I absolutely adore this piece, the information on storks and the gorgeous artwork. This deeply fascinates me and I needed something magical like this to boost my day. Thank you, so , so much~

Please take care,
my best wishes toward you and your family,
Wendy

Winged with rain clouds,
the south wind moves
smelling of pines and sea.

Birds glide on her shoulders
looking for the ancestral
nests they left behind. Woven
of wild grass and vine, baskets
that once held eggs then hatchlings
stay aloft but withered

on roof or gate. White storks
after a long time return
hoping to reclaim
their former stead. The wind
turns her head softly
toward some pasture trees
where a slender boy
blows on his tin whistle.

A folk tune that reminds her
of what she must gather --
the sweet pitch, trends toward a wild
and cleaner earth.

A folk tune that reminds her
of what she must gather --
the sweet pitch, trends toward a wild
and cleaner earth.

That is as poetic a description of out hostess as anyone could possible write. Thanks, dear Wendy. Perfect.

And thank you, Jane

I greatly, as always, appreciate your perspective and thank you so much for stopping by to comment. It means alot!

Take care
my best wishes for your and yours to be well and safe.
Wendy