The Speech of Animals 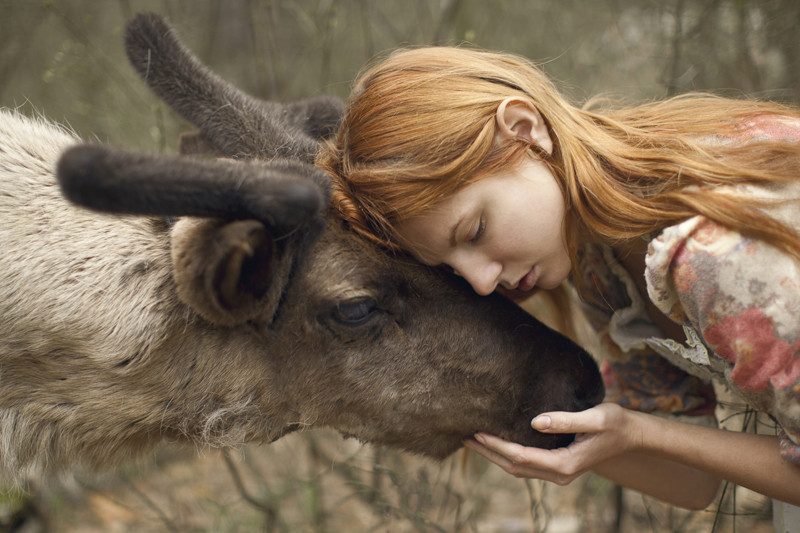 Many an old story begins with the words, "Long ago, when animals could speak...," invoking a time when the boundary lines between the human and the animal worlds were less clearly drawn than they are today, and more easily crossed. 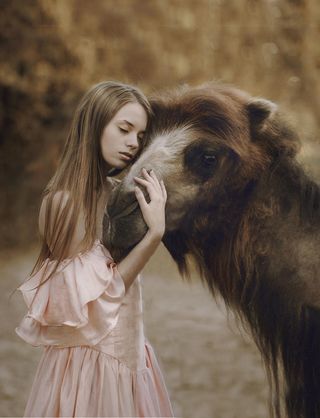 Animals play a vibrant role in the earliest stories from around the globe: tales of animal gods and guardians, animal nurses and paramours, animal thieves and tricksters, animal teachers and ancestors. In ancient carvings and pictographs we find numerous representations of the animal kingdom, as well as images of men and women with animal characteristics: stag-men, bird-men, lion-women, snake- women, and other beings both beautiful and monstrous. Shamans and wizards were said to be able to shape-shift into animal form, attaining these powers after spending some time living with animals in the wild -- sleeping in wolf dens, traveling with reindeer, learning their speech and their secrets.

Folk tales from around the world tell us that the animals communicate with each other in a language unknown to men and women -- or else in a language that used to be known to us, but now is lost. The stories also tell of human beings who understand the speech of animals. Some are born with this ability, while others obtain it through trickery, or magic, or as a gift from the animals themselves, a reward for an act of kindness. In both Europe and Asia, snakes and dragons are closely associated with animal speech. In Norse myth, Siegfried tastes dragon blood and then understands the language of birds; in Arabian myth, one obtains this power by eating the heart of a snake. In eastern Europe, the snake must be white; in France it must be black or green; in Greece, the snake must merely lick the ears of the human supplicant. In some tales, humans blessed with the gift of understanding animal speech must never reveal their possession of it -- and often they lose it again when a careless word or laughter betrays them. Madness and the ability to speak the language of animals has often been linked, particularly in shamanic tales where the line between madness and oracular wisdom is blurred. 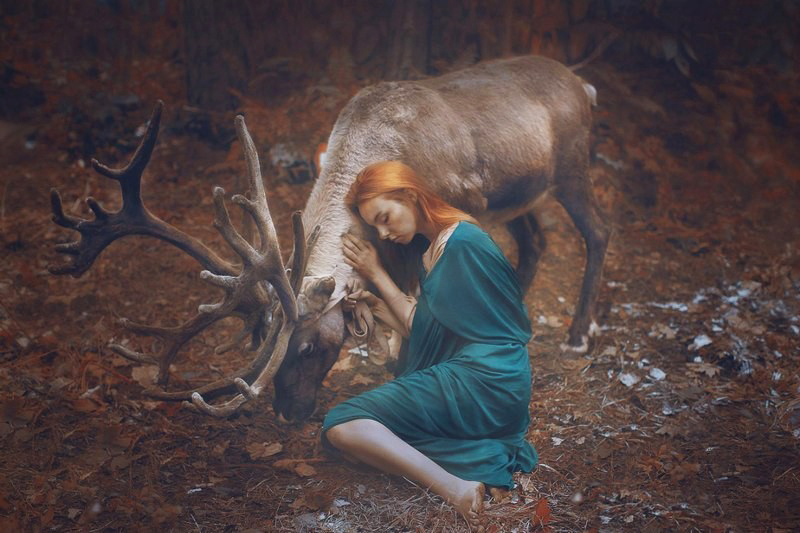 In tribal traditions from all around the globe, animals are believed to have the power to cause or cure certain illnesses. Animal and their spirits are propitiated through gifts, prayers, song, dance, shamanic rituals, and the use of totemic objects. (I once watched a Tohono O'Odham friend sing to a wild hawk in the mountains near Tucson, slowly drawing the hawk within arms' length of where he knealt. The song, he said, was "hawk
medicine," passed down in his family.) 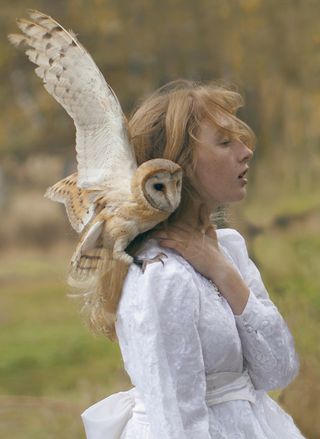 Animal tales are often told not just as simple entertainments but as teaching stories, or as part of healing rites intended to foster a proper relationship between humankind and the natural world. Today, in our rapidly urbanizing society, this teaching/healing aspect of myth -- and, by extension, of Mythic Arts -- has become more important than ever, while we stare ecological disaster in the face and while more and more animal species fall under threat of extinction.

Animal myths remind us that we don't own this earth but share it with others -- with our animal "brothers" and "cousins," as many tribal groups have named them. Some early Greek philosophers argued that animals, too, could reason and love, and thus were no less favored by the gods than human beings. To insist that man was the lord of all, they said, was the height of human arrogance. The Book of Job instructs us to "ask the beasts and they shall teach thee; and the Fowls of the air, and they shall teach thee; or speak to the Earth, and it shall teach thee," while the Qu'ran says, "there is no beast on earth nor bird which flyeth with its wings but the same is a people like unto you." 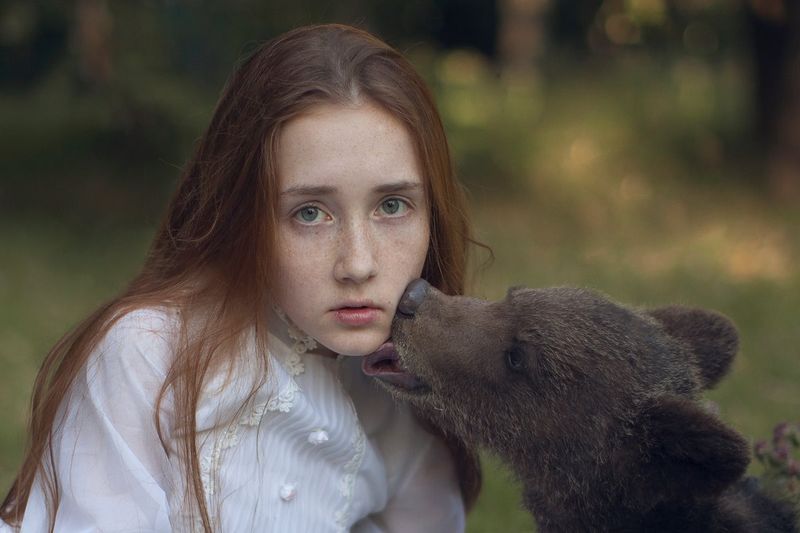 In The Spell of the Sensuous, David Abram writes of the importance of re-learning the language of animals and re-telling the stories that bring us back into a balanced relationship with the natural world. "Human language," he notes, "arose not only as a means of attunement between persons, but also between ourselves and the animate landscape. The belief that speech is a purely human property was entirely alien to those oral communities that first evolved our various ways of speaking, and by holding to such a belief today we may well be inhibiting the spontaneous activity of language. By denying that birds and other animals have their own styles of speech, by insisting that the river has no real voice and that the ground itself is mute, we stifle our direct experience. We cut ourselves off from the deep meanings in many of our words, severing our language from that which supports and sustains it. We then wonder why we are often unable to communicate even among ourselves." 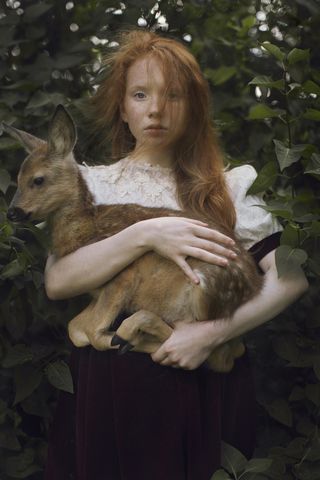 David goes deeper into this premise in his book Becoming Animal, which explores our role in the biological/ecological kinship web that links us with other animal species; and, indeed, with all organic life. "How monotonous our speaking becomes when we speak only to ourselves!" he writes. "And how insulting to the other beings – to foraging black bears and twisted old cypresses – that no longer sense us talking to them, but only about them, as though they were not present in our world…Small wonder that rivers and forests no longer compel our focus or our fierce devotion. For we talk about such entities only behind their backs, as though they were not participant in our lives. Yet if we no longer call out to the moon slipping between the clouds, or whisper to the spider setting the silken struts of her web, well, then the numerous powers of this world will no longer address us -- and if they still try, we will not likely hear them.”

The late naturalist John Hay expressed a similar sentiment in his influential book A Beginner's Faith in Things Unseen: “In a society so estranged from animals as ours," he said, "we often fail to credit them with any form of language. If we do, it comes under the heading of communication rather than speech. And yet, the great silence we have imposed on the rest of life contains innumerable forms of expression. Where does our own language come from but this unfathomed store that characterizes innumerable species?" 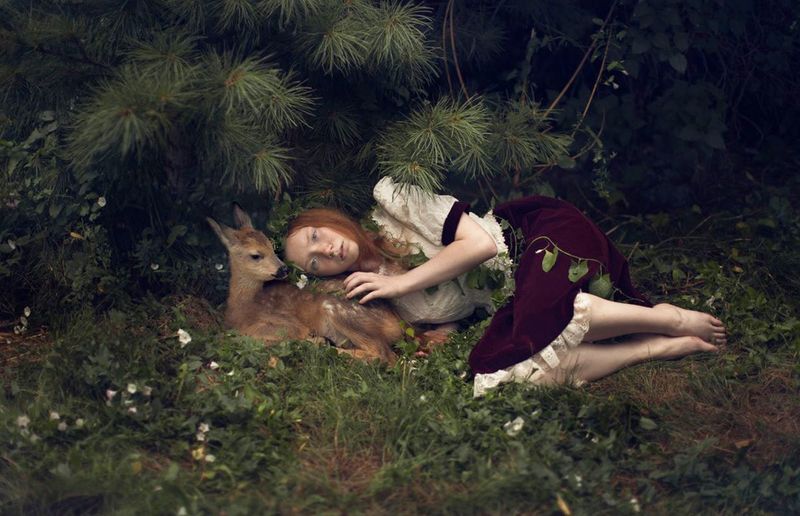 While scientists ponder animal consciousness; and nature writers, the role of animals in our lives; artists, too, can strengthen the relationships between humans, animals, and the natural world...especially in the Mythic Arts field, where we daily work with the world's great wealth of myth, folklore, and ancient sacred stories. 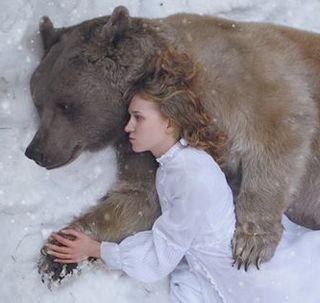 There are a number of wonderful novels, for example, with animal/human relationships at their core: Power by Linda Hogan,  Second Nature by Alice Hoffman,  The Antelope Wife by Louise Erdrich, The Fox Woman by Kij Johnson, Medicine Road by Charles de Lint, The Animal Wife by Elizabeth Marshall Thomas, Bear by Marian Engle, Tender Morsels by Margo Lanagan, A Skinful of Shadows by Frances Hardinge, The Wolf Wilder by Katherine Rundell, East by Edith Pittou, The Girl Who Speaks Bear by Sophie Anderson, The Folk Keeper by Franny Billingsley, The Book of Atrix Wolfe by Patricia McKillip, the Firekeeper series by Jane Linskold, and many others. Whether set in a distant time, or a magical realm, or the modern world we live in, these novels draw from the oldest of stories to remind us of what we once surely knew (at least within our dreams): how to run the wolves; sleep with the bears; converse with the birds, foxes and deer; and reclaim our animal selves. 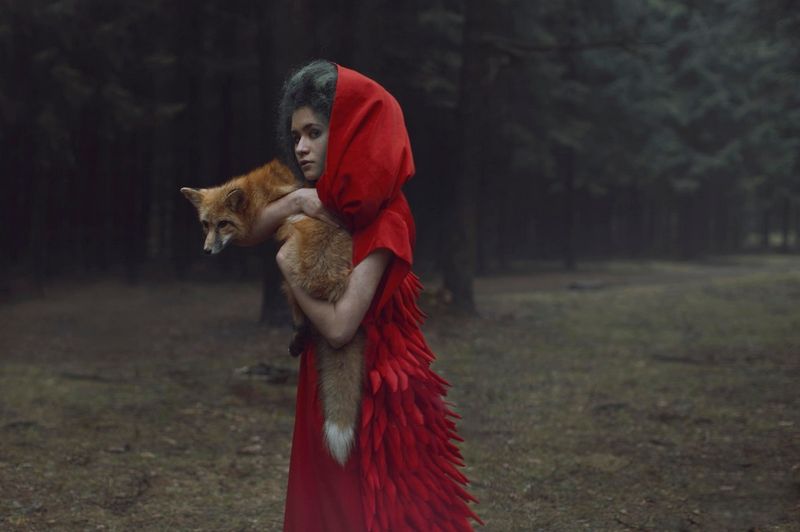 Ama Eaton, the aunt of the young narrator of Linda Hogan's luminous novel Power, says "that animals are the pathway between humans and gods. They are one step closer to the true than we are. She says skin was never a boundary to be kept or held to; there are no limits between one thing and another, one time and another. The old stories live in the present. She believes in stars and their gifts, that the wind speaks in intelligent trees that 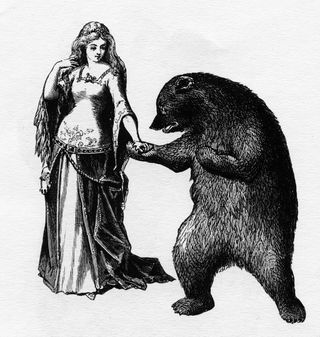 look bright as bonfires to eyes that are open. For Ama the other world is visible. It lives beside us in trees and stone. She can see it, like a path of light across water, and hear it in the swamps at night.... And she believes her faintest move or thought is governed not only by spirits, but by the desires and dreams of animals who are people like ourselves, in different skins."

Stories are what we are, states Albert, a Trickster character in Charles de Lint's "Coyote Stories" (from his collection Moonlight and Vines). "Just
stories. You and me, everybody, we're a set of stories, and what those stories are is what makes us what we are. Same thing for whites as skins. Same thing for a tribe and a city and a nation and the world. It's all those stories and how they braid together that tells us who we are and what and where we are."

''Stories nurture our connection to place and to each other," naturalist Susan J. Tweit agrees (in Walking Nature Home). "They show us where we have been and where we can go. They remind us of how to be human, how to live alongside the other lives that animate this planet....When we lose stories, our understanding of the world is less rich, less true.'' 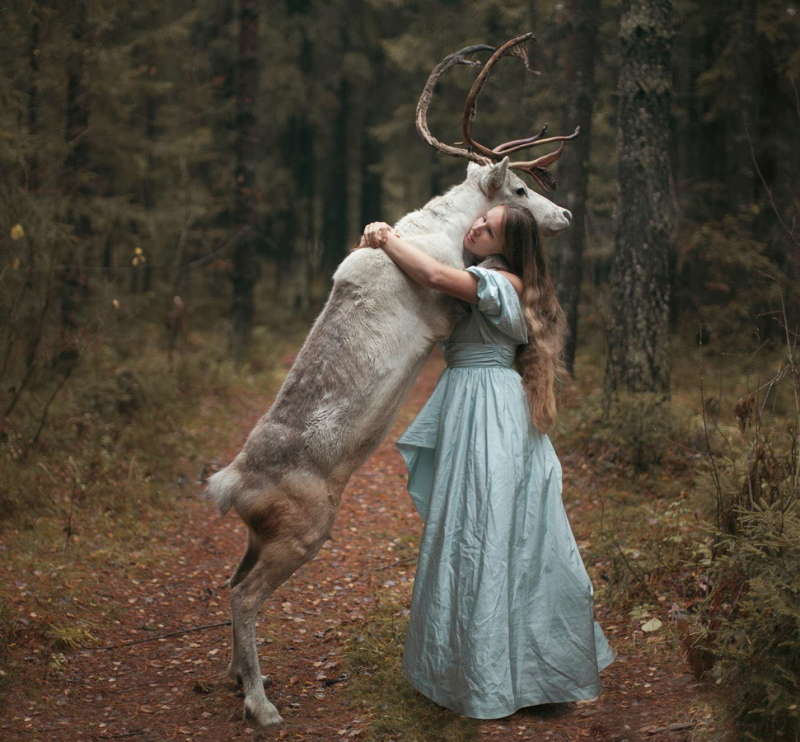 Pictures: The magical imagery today is by the Russian surrealist photographer Katerina Plotnikova, whose work often evokes the old stories of Russian fairy tales and world myth. Go here for a interview with the artist (where she talks about the animals she works with). All rights reserved by the artist. The little bear drawing is a Victorian-era illustration, artist uknown. Words: All rights to quotes text reserved by the authors, and to the essay in full reserved by me. Further reading: Wild Neighbors , Kissing the Lion's Nose, The Peace of Wild Things, and Stassa Edwards' article on talking animals, "From Aesop to doge," in Aeon Magazine.

in From the archives, Thoughts during a pandemic lock-down | Permalink | Comments (2)

Dear Terri- I would add your own wonderful book...The Wood Wife. When I say it set me on a new path when I read it I mean it. Thank you

What Job Knew and Did Not