Sailing to the otherworld
The simple intensity of being alive 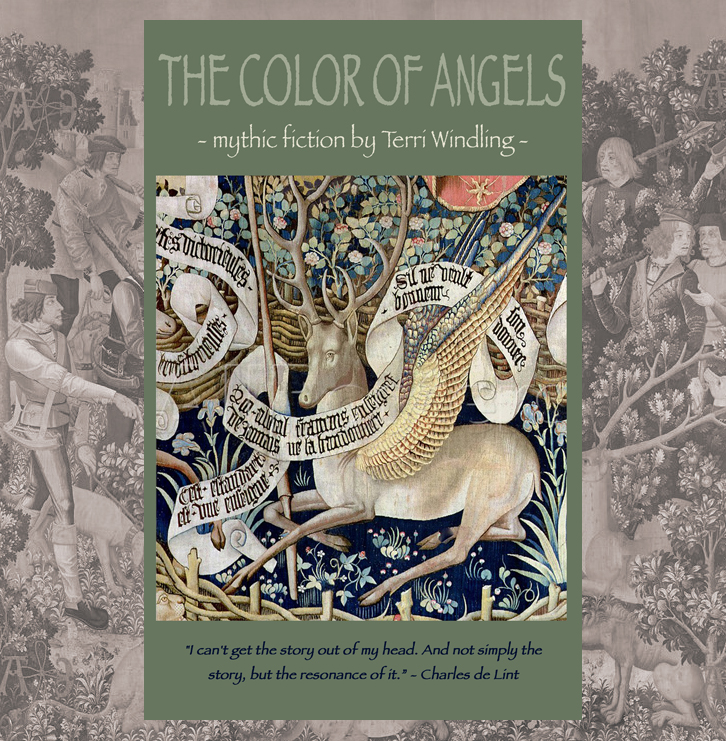 I'm very pleased to announce that we're dipping our toes into the water of publishing with the establishment of Bumblehill Press. To begin with, the press will be focused on bringing some of my backlist of short stories and mythic essays out in ebook editions...but once we get the hang of this, who knows where it might lead? 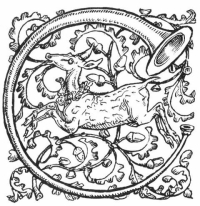 The first publication is "The Color of Angels," a short story about a London artist who flees to the myth-haunted hills of Dartmoor as her life and her health start to crumble around her. The tale is loosely connected to my desert novel The Wood Wife (the protagonists of each, Tat Ludvik and Maggie Black, have been close friends since their university days), but can be easily read on its own. It was first published in The Horns of Elfland, a lovely anthology of magical stories about music edited by Ellen Kushner, Delia Sherman, and Donald Keller back in 1997, and now sadly out of print. In a review of the book at the time, Charles de Lint kindly had this to say:

" 'The Color of Angels' deals with the creative impulse and the complexities of human relationships, but here the focus is on printmaker Tatiana Ludvik, who is undergoing a crisis of faith. That, combined with the frustration of how multiple sclerosis is steadily weakening her body, sends Tat from her London studio to a small chapel in the Devon countryside that she had renovated in the days when she was stronger....The Devon countryside becomes as much a character here as the Sonoran desert did in The Wood Wife, while Windling's narrative skills seem to only grow stronger, particularly in how she balances her lyrical passages with those more firmly rooted in the grittiness of everyday life."

Our ebook edition of "The Color of Angels" is available on Amazon here (U.K.) and here (U.S.).

For those who don't want to buy from the Evil Empire, we're at work on an ebook edition from the ethical publishing platform Hummingbird, and we'll let you know just as soon as that's available. Right now, Hummingbird publications are only available to readers in the U.S., so we're looking for a similarly ethical company covering the UK and the rest of the world.

Lunar Hine (my editorial assistant) and I are still learning how to make this all work, but as we do, we plan to bring you more publications in an increasingly efficient manner. I want to mention that this project has been made possible entirely by the kindness of Patreon supporters, whose generosity helps to fund Lunar's time as managing editor of Bumblehill Press.

I'm so used to promoting the works of other writers and artists here on Myth & Moor that I admit I'm feeling a little shy about promoting these new publications of my own. But I do hope you like "The Color of Angels," and looking forward to cooking up more mythic works for you in this format.

Many thanks to Ellen Kushner and Holly Black, who have been urging me to do this, and to Alan Lee, who has provided behind-the-scenes help. Many thanks and much love to all three of them for their friendship and support.

Art above: The "Winged Deer" image is from Les Cerfs Ailes, a 15th century French tapestry. The drawings are by Walter Crane (1845-1915).

I'm so happy for you, and excited for myself!! The Wood Wyfe is one of my favorite novels ever and I didn't know there was a second part. Wheee!

Exciting news! Any chance it might actually be printed? I hate reading on screens...

Sarah: In case I wasn't clear, this is a short story, not a novel. (Though the novel I'm working on now is also connected to The Wood Wife, and involves both Tat and Maggie.)

Amanda: We'd like to try print publishing in the future, but right now we're focused on getting the e-publications up and running, simply because that's the easiest place to start.

I will be watching for the announcement of an alternative source for The Color of Angels. This is such exciting news. Is it possible to print out an ebook?

This is such an exciting announcement Terri! Do let us know when the Hummingbird option becomes available. (I am in the US!) Congratulations on getting your work to more and more readers. The world could use it just now.

Wow, this is entirely brilliant! Will spread the word. Can't wait to read the story.

This is so wonderful!!!!

This is exciting and wonderful news. Congratulations on getting to this point, I can’t wait to see where this goes!

Thank you everyone. The Color of Angels is brilliant and I'm very happy it's out in the world.
And, Ben, thank you. Anything you can do to boost the signal will really help.
Also, if any of you buy through Amazon, it would be great if we could gather some reviews there.
Enjoy :)

This wonderful news! Any chance the Wood Wife will come to ebooks? I love your novel and reading with a Kindle makes it much easier to enlarge the print. These old eyes ain't what they usta be. 👀

Excellent and much needed news. I remember when I first read this story and how overcome I was by its beauty
!

Wonderful, Terri! I look forward to where this will go, congratulations, and yay for us who will be blessed by your abundant magic!

This notice is such a bright spot in my day! I recently reread The Wood Wife and look forward to "The Color of Angels." Perhaps you will consider a small run of chapbooks for your short story. I would certainly purchase one!

I think that you have just about convinced me to invest in my first Kindle, never thought I would be doing that. Whilst I would certainly prefer a real world paper edition I fully understand the thinking behind this move, wish you the very best of luck with the venture....

I agree with Peter! I hardly ever use my Kindle, but I will for these editions!

YAY!! Congratulations, Terri!! I can't wait until everything is up and running smoothly!! Would love to see Bumblehill Press opened up to other authors in the US and UK in the not to distant future!!

I'm so excited! Congratulations! Looking forward to reading it.

This is wonderful! I ordered the e-book, but I truly look forward to your full-scale publications.

Such exciting news! I am delighted to hear of this and thrilled to see what beauties you create. <3

So proud of you! So excited about Bumblehill Press! Love the cover - subtly inviting us into your studio, where the tapestry hangs, and we have spent so many happy hours. And so honored that the dedication of this edition is to Delia & me. As my grandma would say: "She knows how to do."

I believe it's technically a "novelette," the name for a long short story that is under 17,500 words (after which, it becomes a "novella), as it is 13,500 extremely satisfying words.

For people who don't have or desire to have a Kindle:
There is a Kindle App that you can download onto a regular tablet or mobile phone.

Terri this is so marvelous!! I would like to support Hummingbird. How may I contact them for your ebook? I am very excited for you and Lunar! Your posts continue to inspire me to keep stepping forward in my visionary dreams so others can partake along with me in my shenanigans. One day it will all be (including me) in its proper Home, Devon.

Wow, this is all so lovely to read :).
Morgen, just this very morning we were having a lovely socially-distanced meeting in my garden (with Tilly and occasional 4yo), plotting our next move in bringing Terri's back catalogue out as ebooks.
Erika, we are still in the process of making The Color of Angels available via Hummingbird, but hopefully it will happen soon.
And if any of you want to be super sure you don't miss anything Bumblehill, then sign your good selves up to our newsletter for all Terri's work, plus book and online recommendations and general updates.
Thanks for all the love!

Oh, my heart... this may be the best news of the year. (Yes, I know, not a worldly high bar, but personally it's been a fabulous year.)

Terri, congratulations! I am so *delighted* to see this. If Bumblehill can, I found https://draft2digital.com very useful for distributing ebooks in the USA and worldwide to Apple, B&N, Google, and libraries. But mostly I am just very happy that this toe has been dipped in the water — neither the toe nor the water will ever be the same. Congratulations!

Congratulations!! I'm so excited for you and all of us! 🥰

Really looking forward to this! Appreciate you working with Hummingbird 💕Will keep an eye out for availability.

It would help if I actually gave you the link to the Bumblehill newsletter: http://tinyletter.com/TerriWindling
See you there :)

SO exciting! I downloaded it, can't wait to read it, and look forward to where this will all lead! CONGRATULATIONS! :) e

This really IS wonderful news, in the true sense of the word. What took you so long . . .

I am eagerly awaiting the Hummingbird edition! The Wood Wife is my favorite book of all time.