More tales from the sea
On the Isle of Jura

A figment of fog 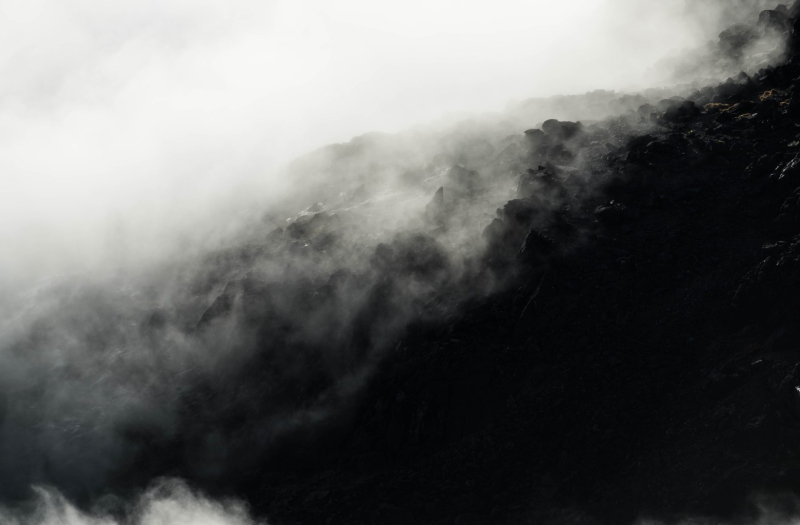 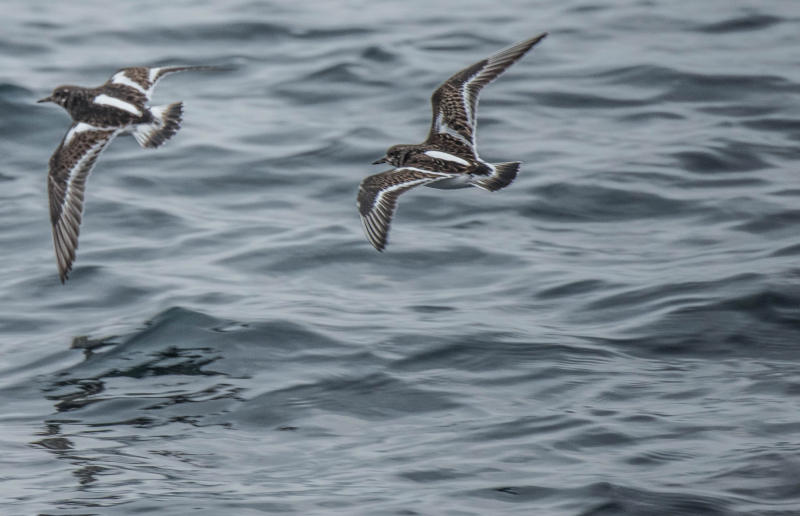 Here's one more selection from David Gange's excellent book The Frayed Atlantic Edge , weaving history, literary reflections, and vivid descriptions of the natural world into the story of a year-long journey down the coast of Britain and Ireland by kayak. In the following passage, the author is heading to the Isle of Skye in the Scottish Hebrides: 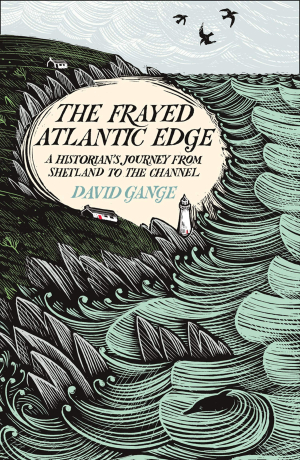 "The long, dark night I spent between knuckles of knock and lochan on the edge of the Inner Sound was intensely atmospheric. I hunkered down against a thin smurr of rain, sometimes caught in moonlight, with the thick smell of sodden peat eclipsing the salt of sea just feet away. And I read about the most celebrated boats to have plied this water. The book I read, Alasdair mac Mhaighstir Alasdair's The Birlinn of Clanranald, is one of the great Gaelic seafaring epics: an Iliad in which the Troy to be stormed is this Hebridean sea itself. Written in the 1750s, it's set at a time before Culloden, when islanders still wore kilts and chain shirts: its symbols often seem to belong to the 15th and 18th centuries simultaneously. The author was a Jacobite who commanded fifty men and tutored Prince Charlie. When Hanover triumphed at Culloden he left the mainland for the Hebrides to escape recrimination for the scathing verse he'd aimed at the new royals. His world remained that of the seafaring clans MacDonald and Clanranald: the north of Ireland, Argyll, Islay, Uist, Canna and Skye. 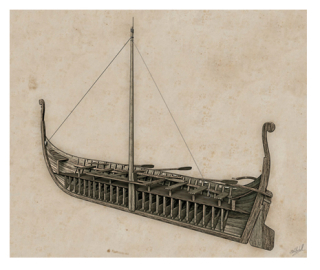 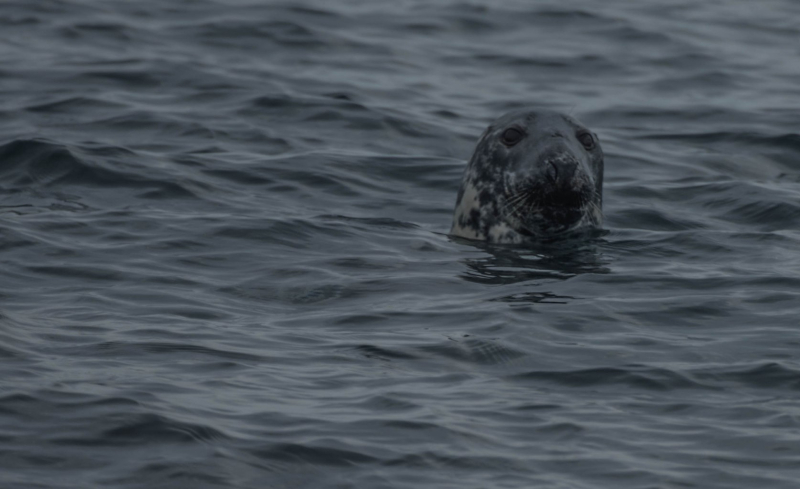 "Tradition holds that, seeking inspiration for The Birlinn of Clanranald while he was baillie of the isle of Canna, Alasdair lay beneath an unturned vessel on a Hebridean shore. Entombing himself in darkness, with only the smell of the boat for company, was a strategy to spark imagination. The principle became an idée fixe among Atlantic aficionados. Ludwig Wittgenstein, for instance, channelled Alasdair when he claimed to 'only think clearly in the dark' and, in 1948, fled the street lamps of south-east England for waters the birlinns had travelled: he noted, with approval, that the Irish Atlantic he found was 'one of the last pools of darkness in Europe'. Seamus Heaney, at his most elemental and earthy, wrote himself into this proud tradition. 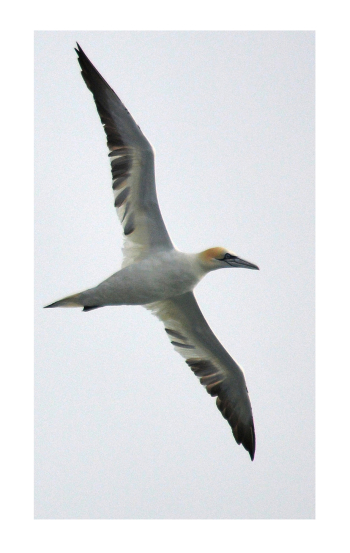 The final lines of 'North' are set on a long strand with only the 'secular powers of the Atlantic thundering'. The sea inspires reverie that sends the poet spiralling back centuries to see the water as the road of Norsemen. The 'swimming tongue' of a historic longship speaks to Heaney and invokes the poetic darkside:

‘Lie down
in the word-hoard, burrow
the coil and glea
of your furrowed brain.
Compose in darkness.
Expect aurora borealis
in the long foray
but no cascade of light.
Keep your eye clear
as the bleb of the icicle,
trust the feel of what nubbed treasure
your hands have known.’

"It is perhaps surprising that the poetic fiction born of Alasdair's self-imposed enclosure contains such detailed description of the birlinn's structure and the actions of its crew. It is the best evidence we have for the facts of what this vessel was. No examples of the boat -- even wrecked -- survive: in 1493, When James IV absorbed the Lordship of the Isles under the Scottish Crown he demanded that all birlinns be burned to end the power of the sea lords. 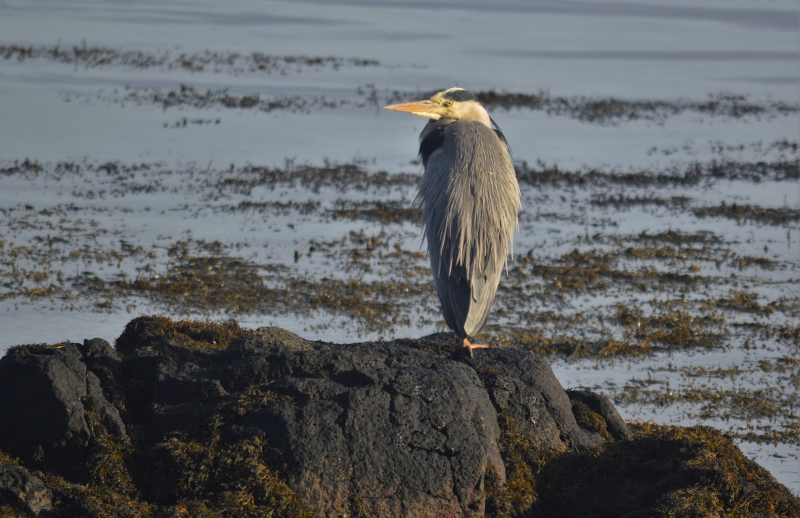 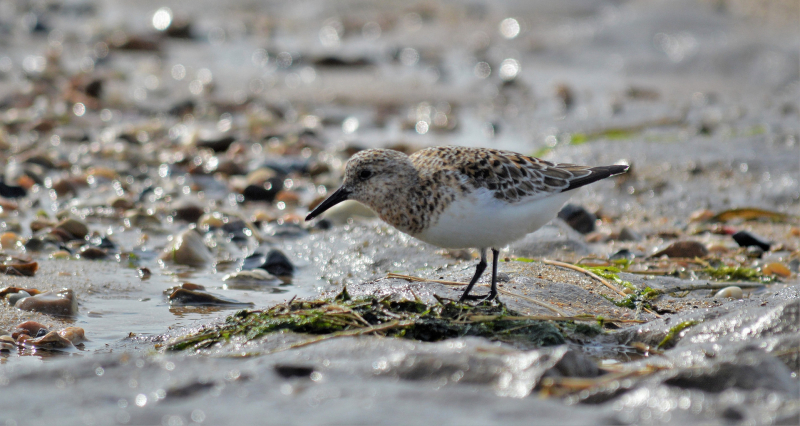 "Alasdair's birlinn moves through a Hebridean sea that's as cunning and wise as human or animal. It's an old manwith streaming grey hair and a creature with gaping jaws and matted pelt. As a respected foe, the sea's will is pitched against the desires of the boatmen. It responds to being struck with oars until, eventually, it submits to human strength. The boat is also alive, crying out like a person and whinnying like a mare, treading waves not with planks and thwarts but shoulders and thighs. Boat and boatmen are one: the sweat on the sailors' brows is the brine foaming around the bow. And the boat becomes their homeland as they climb creaking mast and ropes 'as quickly as May squirrels on the trees of a dense forest'. At sea all distinctions between animate and inanimate, sentient and insensible, human and animal, flounder. In these verses, as in much writing on its waters, the Minch is layered with metaphor; the inter-island seas are known like friends and rivals; waves and tides are feared or loved like animals of hill and forest. Here is humanity engaged in the quest for mastery over nature: for separation from the seething conflicts of the bestial, elemental world. But to Alasdair's protagonists, before the age of steam and steel, that quest still seemed impossible; dividing lines, distinctions and disentanglements can rarely survive a single line of verse. 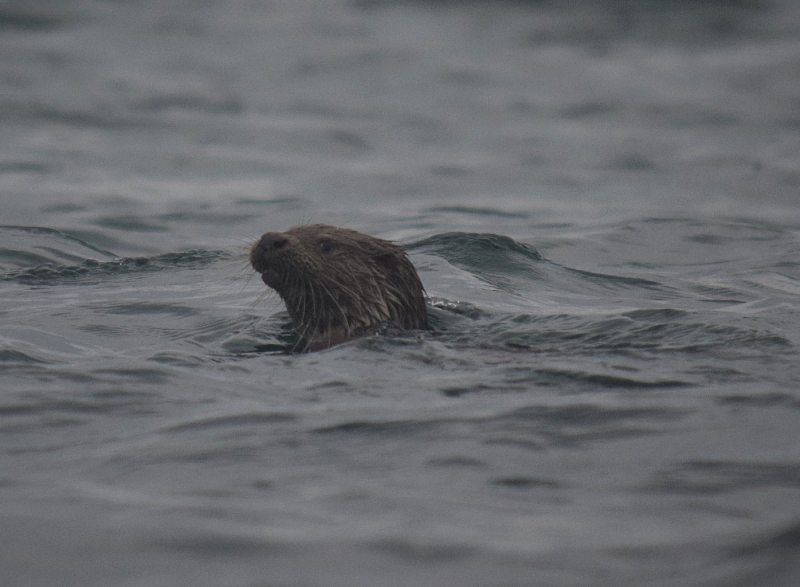 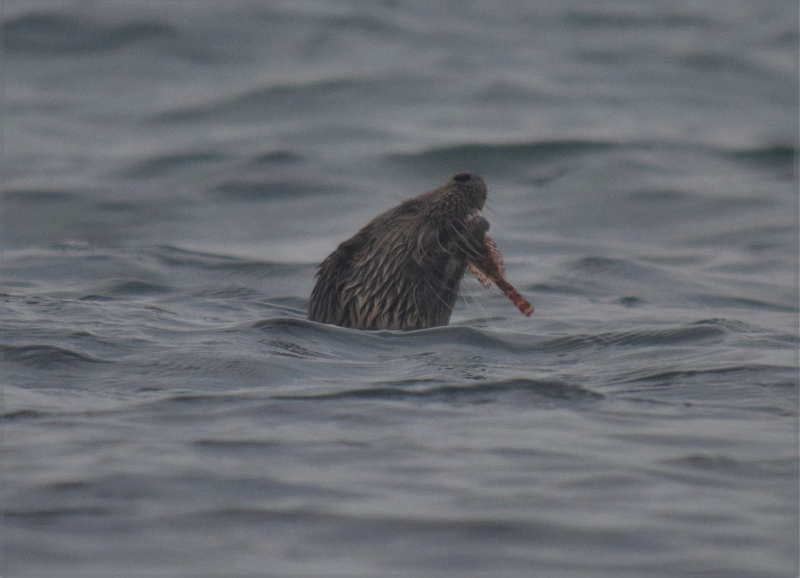 "Next morning, I prepared my own encounter with the grey-haired sea in mist that made me alert to animal encounters. Before I even hit the water, a brute of a dog otter surfaced on its back, scarred snout and crab catch raised above the waves. It didn't bother to acknowledge my presence but rolled like a thing uncoiling, then lolloped noiselessly into brown remains of bracken. It took seconds from its departure for its passing to feel mythic, and moments later I was moving through cold smoke-like rain towards a lunchtime landing beneath the Rona lighthouse.

"This night in the fog had established the tone for the month. As I crossed the Inner Sound and kayaked each long finger of Skye's western edge I breathed mist, drifted through sweeping rain, and saw the island only as shape-shifting cliffs that loomed, suddenly, from saturated skies. Headlands were bands of thick dark haze, and I found I could judge my distance from them not by their size but by the degree to which they blackened the otherwise featureless pall of grey. 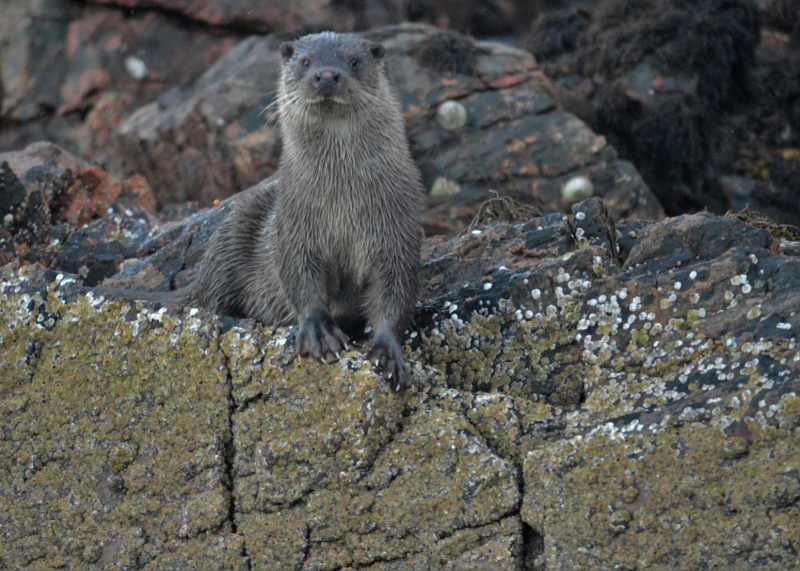 "The otter felt like an appropriate sigil of this place because it has long been treated as hybrid and unknowable. Like the barnacle goose, otters were a conumndrum for the monkish administration of Lent: both seemed more fish than bird or mammal. Some Carthusian monks were forbidden meat all year round. Instead, they ate otter. In Norse and Celtic story otters, particularly otter kings, change form and grant wishes, but only in the unlikely event of their capture: the animal's fluidity gives it the character in water of intangible smoke in air. The otter is its element: 'ninety per cent water', to the poet Kenneth Steven, and 'ten per cent god'. But they are also friendly 'water dogs'. They brought St Brendan fish and firewood; they warmed and dried the feet of St Cuthbert when he finished his nightly vigils waist-deep in sea. In the work of the great poet-naturalist Colin Simm the otter is a boat that's 'all rudder'; it is Mesolithic, belonging in an ice melt 'a few thousand years back' when elver-silvered rivers still thronged the landscape. Simms has written hundreds of closely observed otter poems, and in many, floods are the creature's medium. Water sweeps land when, in acts of drainage and deforestation, 'a balance of centuries to the balance-sheet yields'. When otters twist and tumble through redrowned vales a historic ordering of water, earth and animal is reprised in a beautiful unplanned catastrophe of rewilding. 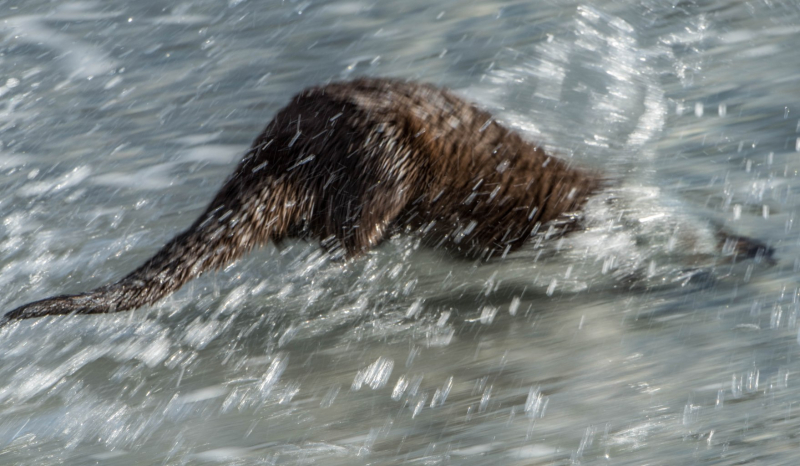 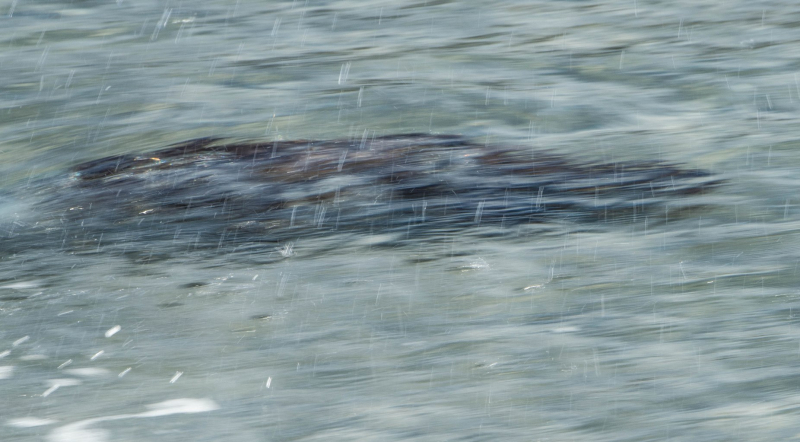 "As poets make otters into ribbons of water, so they make Skye a figment of fog, a realm subject not to divine or human law but to 'amorphous rules of light.' When Richard Hugo, poet of the Pacific Northwest, came to live on Skye he wrote that the shifting mists alter the colour of the island a hundred times a day and 'never stop changing the distance to the pier from your front door'. Skye's epithets -- to the Norse, Island of Cloud; Misty Isle to the Gaels -- are aerial and never earthy. The prevalent sou'westerlies are 'the grey wind' that scoops the otherworld of the sea ashore. This island is the grand centrepiece of the Hebridian world, straddling the Minch both north-south and east-west. Smaller than the land mass of Lewis and Harris, its coastline is far longer: its gangly peninsulas intercept fog-bound vessels on a hundred different inter-island routes.

"Skye's geography has long been mystified: it is '60 miles long', according to the mountaineer W.H. Murray, 'but what might be its breadth is beyond the ingenuity of man to state'. This is perhaps why Skye is the most the most zoomorphic of landscapes: an animal island. When factual delineation falters on its ragged edges, diverse living things scuttle in." 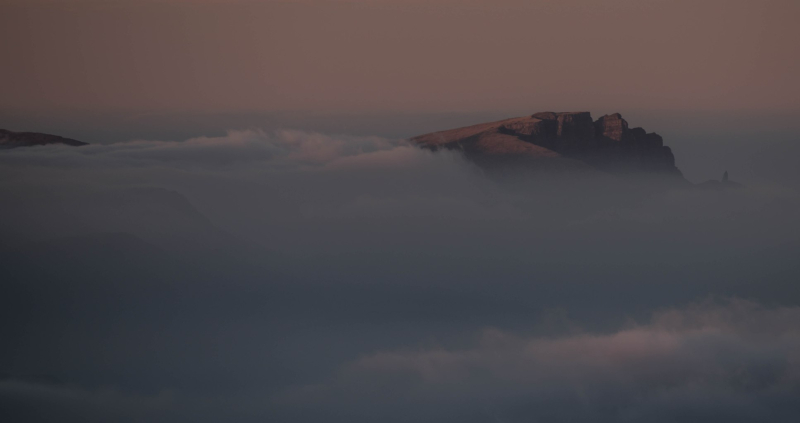 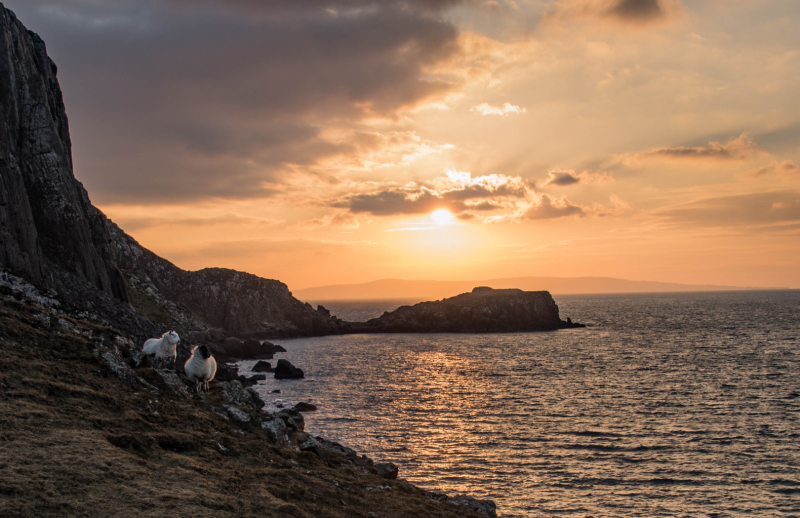 The passage quoted is from The Frayed Atlantic Edge: A Historian's Journey from Shetland to the Channel by David Gange (William Collins, 2019).  The photographs are also by Gange; visit the Frayed Edge of the Atlantic website to see more. All rights to the text and photographs above reserved by the author/photographer.

Still looking for an actual story about The Otter King with his cloak of silver and his ability to transmute objects. The glancing reference to him in a brochure about the castle at Eileen Donan (where He was said to rule from) excited my imagination and still does...

@ Charles Vess -- hope you find your story. Maybe Jackie Morris can write one for you. She knows the spell song for Otter.

Only in Scotland,
that thin smurr of rain
out of a smudge of sky,
the drops soft,
not sheeting down
upon your cap,
but comforting, like the tweed.
Rain footsteps patter
ahead, behind,
as if you re being lead,
followed by an old friend.
And there's the expectation
of a rainbow or two
in the near after.
I miss it here,
in the bolted-down
virus-ridden land
where rain sheets ,
thick as canvas,fall
and the summer
sounds like a cattarh.
Will I ever be let in again,
to that gray and comforting
land I love
before the earth itself
blankets me
in its own version of time?
I will answer next summer,
one way or another,
in a crisp manner,
or a smurr.