Writing from the edgelands
Little shape-shifters 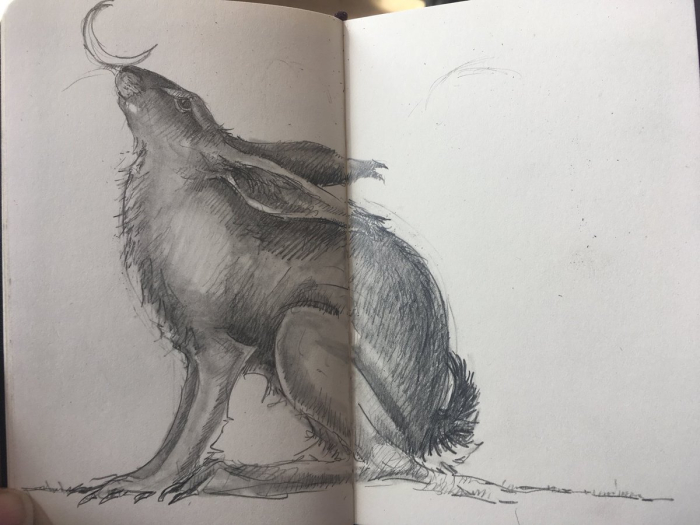 As many of you know, I spent much of 2018 - 2019 happily immersed in the Modern Fairies project, an arts and research initiative which brought folk musicians, artists, writers, folklorists and filmmakers together to create works exploring what Britian's folklore tradition means to us in the modern world. After twelve months of research and collaboration, the project ended with a concert and multi-media presentation at the Sage Theatre in Gateshead/Newcastle (Spring 2019), but my MF colleagues are continuing to develop this material in a number of interesting ways -- the most recent of which is Wrackline, a gorgeous, deeply magical new album by the distinguished folksinger, songwriter, and music scholar Fay Hield. (It comes out in September, but is available for pre-orders now.) In the run-up to Wrackline's release next month, Fay is publishing posts highlighting the album's six folklore themes -- beginning with tales of witches (and other women) who cast themselves into the shapes of hares.

Above: A short video in which Fay introduces the concept of the new album.

Below: "Hare Spell," from Wrackline. As Fay explains:

"In exploring the mythical supernatural on the Modern Fairies project I became excited by the question of real magic and belief, and spent some time looking at magical acts themselves, rather than the stories about them. Inge Thomson and I chatted about the nature of spells and where the magic lay. Words are commonly seen to hold power, but as musicians, we wondered how we could draw this out through sound. We toyed with the relationship of music to language noticing that pitches are conveniently given letter names. That evening at the very first meeting of the Modern Fairies [at Oxford University, Summer 2018], we mused about how music could come out of the words themselves.

"I needed a spell, a real one that held magic. Jackie Morris gave me some words about a hare and a little digging showed that it comes from Isobel Gowdie, the wife of John Gilbert, likely a cottar in Auldearn, near Inverness. Isobel was tried in 1662 during the witchcraft trials and her confession gives a clear account, seemingly uncoerced, into her activities with the devil and visiting the king of the fairie. She includes several spells and chants used to conduct her own magic, including this spell to turn the utterer into a hare to do the devil’s work." Below: "When She Comes," a second hare song which grew from a collaboration between Fay and poet Sarah Hesketh. Sarah writes:

"As I sat and listened to Fay transform her reading about Isobel Gowdie into song, I found myself really drawn into the story she was beginning to tell through the music. Here were two characters -- a woman and a hare -- with an incredibly strange and intimate relationship. Fay's song 'Hare Spell' was a glimpse into that relationship from Isobel's point of view; but what, I wondered, did the hare have to say about it all? How did he feel about having his body appropriated for her eldritch purposes? Was this a kind of hi-jacking or was there something more complex and consensual going on between the two of them? I wanted to explore the idea that the hare might be more than just a passive vessel for Isobel's adventures, and how it might feel for him to have to say goodbye as she decided to return to her own body."

The words are by Sarah and the music by Fay, with underlying chordal structures created by Ben Nicholls and Inge Thomson for Modern Fairies project, then further developed by Sam Sweeney and Rob Harbron for Wrackline. This is the Modern Fairies version, recorded at The Sage performance in April 2019. It was one my favourite songs from the show, bringing a lump to my throat every time I heard Fay sing it. (Sarah's exquisite lyrics  are here.)

There are more shape-shifiting hares to come: Fay, Inge, Sarah and I are working with the good folks of the Alternative Stories podcast to create an audio drama on the subject; we'll let you when the broadcast date is set. And keep an eye on Fay's blog in the weeks ahead if you'd like to know more about the other songs on Wrackline (including one based on my poem "The Night Journey," which is an honour indeed). 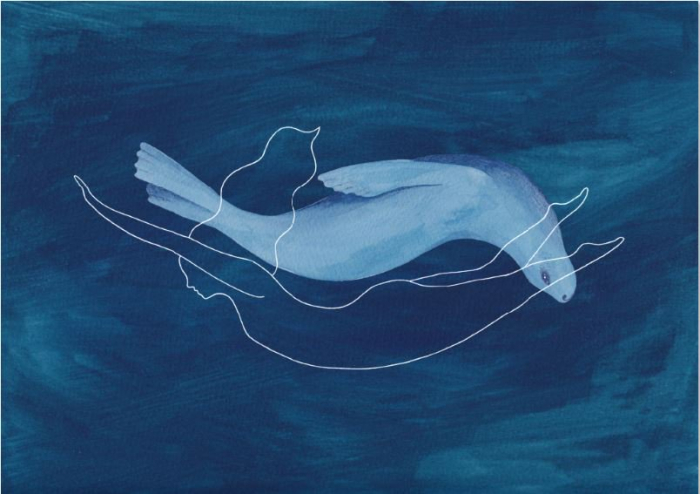 Another thread of work that emerged from the Modern Fairies project was inspired by selkie (seal people) lore -- including songs created by Lucy Farrell, Inge Thompson, Barney Morse-Brown and Fay, presented in the final Modern Fairies show with art by Natalie Reid.

In the Autumn 2019, four of us from the project (Lucy, Fay, Barney, and me) reunited to present The Secrets of the Selkies: an evening of song and story at the Being Human Festival in Sheffield. During the week leading to festival, as the others ordered and rehearsed their music, my job as a writer/editor was to weave poems and monologues between the songs to join them into a common narrative, examining classic "selkie bride" folk tales from several characters' point of view. I don't know what the evening was like from the audience, but from the stage it felt like pure magic ... ending with choral singing of the selkie's call by everyone in the hall.

Above: A screen projection produced by Lucy -- with Natalie's art, Lucy's music, and selkie encounters described by Inge (who grew up on Fair Isle) and others.

Below: A little video by Tim James capturing a collage of moments from The Secrets of the Selkies. 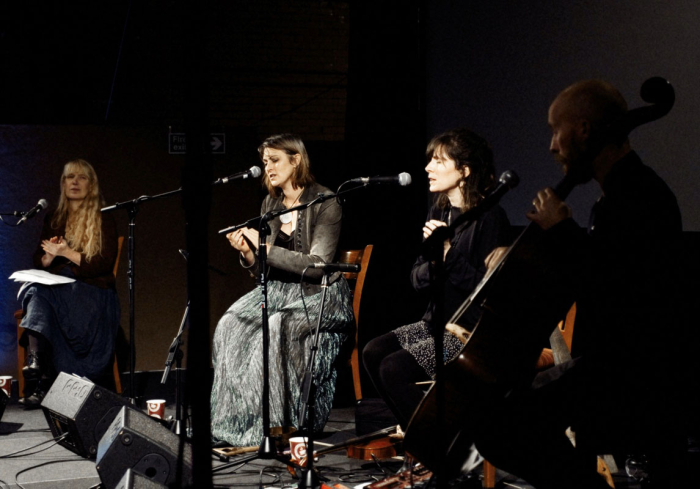 Art above: Hares by Jackie Morris, and a selkie by Natalie Reid.  The photograph of Fay's banjo is by Elly Lucas. All rights to the music and art above reserved by the musicians and artists.

Wrackline pre-ordered, along with a couple of older albums. I love Ms. Hield's voice!

The links to Heidi's music, and the process involved to share the creative process are VERY INSPIRING. Watching what people are doing using ZOOM to think and creative differently is just what I needed. There are face masks to make in a few minutes, that's the mundane reality but in between each cut and stitch, the process of creativity balloons and I am carried away. "Imagination and curiosity thread my needle."
Thank you, Terri how wonderful to see what you and your creative cohorts are doing with the Modern Fairies project!