Following the deer
Telling stories back to the land

I'm thinking about deer on this brisk autumn morning -- but the stags and hinds of the folk tradition tend to be hunted and haunted, and their stories rarely end well (for the deer). Chased by keepers and kings, they run to the dark of the forest, and leap into the heart of enchantment. Following their trail is never a safe proposition, as folk and fairy tales tell us over and over. The trail leads to death, or a life transformation, and we never know which it will be.

Above: "Abbots Bromley Horn Dance" by Stick in the Wheel. This folk dance is performed each year in Staffordshire, and dates back at least to the Middle Ages, with older pagan roots. The precise meaning of the original dance can only be speculated, but it may have been a form of sympathetic magic to bring about a successful hunt, honouring the deer and the hunters alike.  The video animation above is by Teresa Elizabeth Lobos, with archival footage from the village of Abbots Bromley.

Above: "The Famous Flower of Serving Men" (Child Ballad #106 ) performed by Martin Carthy, another of the great musicians behind the revival of British folk music in the 20th century. This one is a murderous, magical, gender-bending tale that turns on a hunting trip, a mysterious white hind, and a ghostly white dove who weeps tears of blood. Carthy's version, recorded for his album Shearwater (1972), went on to inspire Delia Sherman's fine novel Through a Brazen Mirror (1989), and a portion of Ellen Kushner's award-winning Thomas the Rhymer (1990), both recommended.

Below: "Geordie" (Child Ballad #209) performed by June Tabor as part of Silly Sisters (with Maddy Prior), on their self-titled debut album (1976). It's the story of a man caught poaching deer in the king's greenwood, and a bold woman determined to save him from execution for the theft.

Above: "King Henry" (Child Ballad #32) performed by The Furrow Collective (Lucy Farrell, Rachel Newton, Emily Portman, and Alasdair Roberts) -- a ghostly story that starts with a deer hunt, proceeds to the after-hunt feast, and then gets progressively stranger. Martin Carthy, who also sings the ballad, once referred to it as "Beauty and the Beast reversed, originating in the Gawain strand of the Arthurian legend. The King Henry in the ballad probable never existed, since the point of the tale is that chivalry has its own rewards."

Below: "Sheaf and Knife" (Child Ballad #16) performed by Eliza Carthy (Martin Carthy's daughter, of the Carthy-Waterson folk music clan). This incest tale is dark even by Child Ballad standards, which is dark indeed, involving a deer hunt with hawk and hound that leads to a young woman's terrible fate. Carthy's version of the song appeared on her album Heat Light & Sound (1996).

Above: "The Keeper," a traditional English folk song ostensibly about hunting the doe, but with obvious sexual connotations -- performed here by Sam Kelly and the Lost Boys, from their album Pretty Peggy (2017).

Below: "The Death of the Hart Royal" performed by Faustus (Paul Sartin, Benji Kirkpatrick, and Saul Rose). This unusual ballad of Robin Hood, Lord of the Greenwood, was found in the archives of Somerset folk song collector Ruth Tongue. The band recorded it for their third album, Death and Other Animals (2017), when they were Artists in Residence at Halsway Manor, the National Folk Arts Centre in Somerset's Quantock Hills. 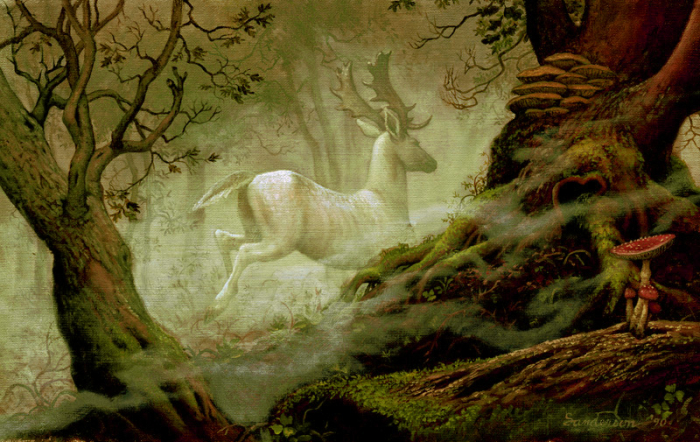 Art above: A detail from the "Winged Stag" tapestry (French, 15th century), and "White Stag" by Ruth Sanderson. For deer folklore, magic, and poetry, see the previous post, Following the Deer.

A cracking set of tunes, as usual. Deer inspired magical moments for me include a misty sunrise silhouetting a stag as it made a dramatic dawn entrance and bottle feeding a young deer that had been 'rescued ' by a visitor to Tatton Park, where I was working at the time.
Keep up the inspiring and greatly appreciated posts that act like way markers to the magic and mystery that surround us.

Like for like: here's "Dance Of Hoof and Horn" with Alexander James Adams and S.J. Tucker, https://www.youtube.com/watch?v=6QANIQRGLSQ