The Visionary Art of Marja Lee Kruÿt
We are storytelling animals 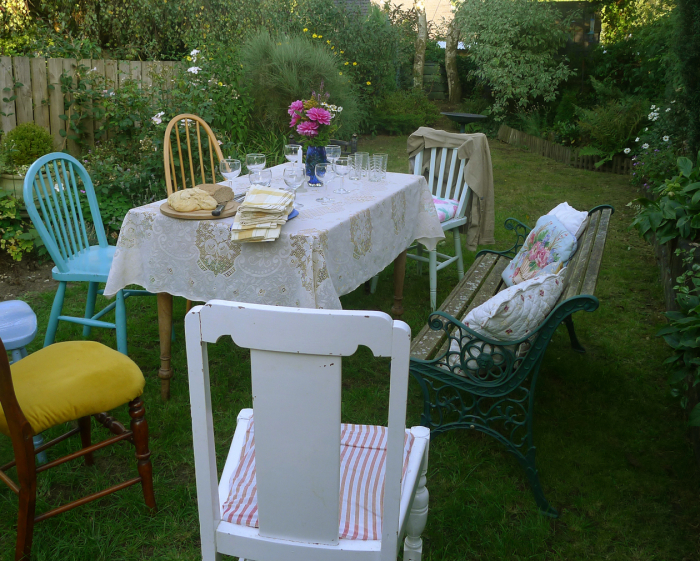 Here in Devon, apples cluster on mossy old trees and blackberries are ripening as the summer eases into autumn. The morning air is crisp with change ... yet the pandemic goes drearily on and on. With each new season we learn new ways to live with it, but it takes a heavy toll.

Working from an isolated cabin by the woods, my daily routines (long hours of solitary desk work, broken by rambles through the hills with Tilly) have changed less than most. But Chagford, our village, is a sociable place, and it is very strange to have gone so long without meeting up with friends and neighbours for meals, music, community events, shared celebrations. The summer went by in the blink of an eye and seems to have barely happened at all. The Dartmoor countryside was as beautiful as always, the air even clearer, the birdsong more vivid ... but without friends gathered at an outdoor table, or sprawled around a picnic blanket, or playing music by a campfire while the kids and dogs tumble through the tall grass, it didn't actually feel like summer. I usually love the turning of the seaon, but this year it is tinged with melachology for all we've missed.

In honour of convivial summers past, and in the hope that there will be many more to come, I'm starting the week with songs of feasts and friendships, and of weathering hard times together....

Below: "Nest" by Ruth Moody, from Winnipeg, Canada -- best known as a member of the Wailin' Jennys trio. The song appeared on her first solo album, The Garden (2010).

Above: "Stand Like an Oak," a new single fom Rising Appalachia (sisters Leah and Chloe Smith), who divide their time between Georgia and New Orleans. Their most recent album is Leylines (2019).

Below: "Old Pine," by Ben Howard, who hails from the other side of the moor. This one, set on the Devon/Cornwall coast, is an old favourite of mine from Ben's first album, Every Kingdom (2011).

Above: "Old Ties and Companions" by Mandolin Orange (Andrew Marlin and Emily Frantz), from North Carolina. The song appeared on their fourth album, Such Jubilee (2015).

Below: An ode to the "Company of Friends" by Carrie Elkin and Danny Schmidt, from Austin, Texas. The song appeared on Elkin's solo album For Keeps (2012). 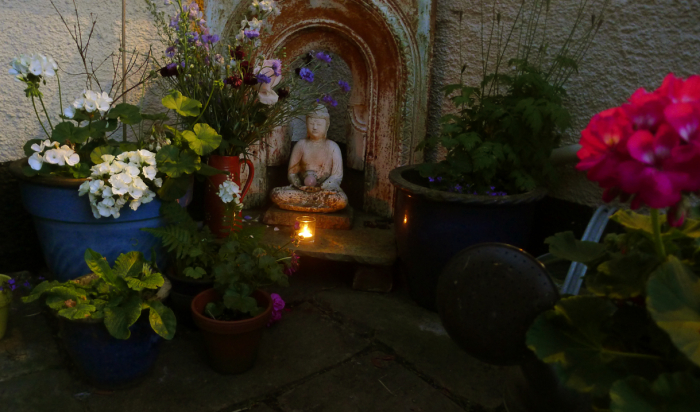 But let's not end on that somber note.

Below, "Typhoon" by Laura Cortese and the Dance Cards reminds us that after the wreckage of life's storms there's a time for building up again, preferably surrounded by our friends. The song is from their new album, Bitter Better (July 2020). 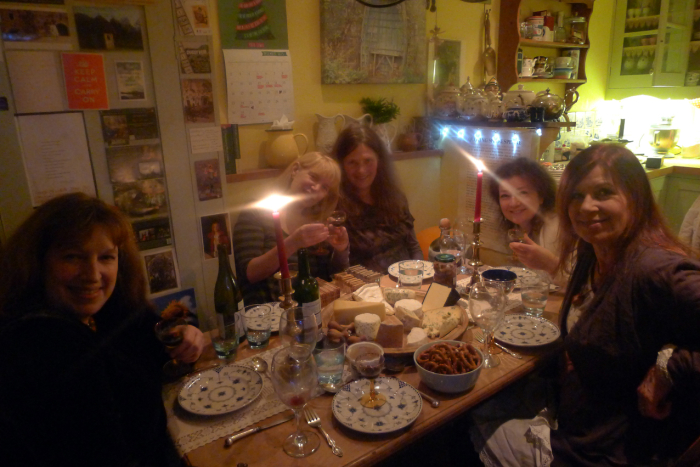 Top photograph: Preparing for a gathering of friends in my mother-in-law's garden here in Chagford, pre-pandemic.
Bottom photograph: Feasting with a group of women friends: Wendy Froud, me, Carol Amos, Elizabeth-Jane Baldry, Marja Lee and Hazel Brown (holding the camera), in Elizabeth-Jane's cottage kitchen. We'd been meeting monthly like this for over 25 years until the pandemic struck. I long for the day when we'll meet so freely again. I know it will come.

I know it's not a British holiday, but Happy Labor Day anyway.

These days my friends are virtual most of the time, and blogs are a contact around the world where I get to see many different views of life...I'm so glad you had music for me this morning. Windows are open to fresh cool air as summer starts to fade from these mountains of western North Carolina. Thanks for your sharing!

The dogwoods and ponds are turning in Abingdon (Virginia), and were it not for posts from you and Charles Vess, I do believe I would have gone mad this summer. Six months of solitude with winter coming on doesn't strike me as desirable. I look forward to visiting your cabin each day because what you write and capture with photographs can transport me to Devon. I want you to know that while your village friends are not about, countless others are through your writing. One day, we will have family and friends around our tables and in our gardens, so as autumn creeps in with winter close behind, I shall overlook the solitude, have my cuppa and write, but only after reading your thoughts from the cabin and Tilly's Wood.

A beautiful lift of music, THANKS so much Terri. A brisk wind sweeps the dry campground here, the sounds of the art tickle me in just the right places. There is change on that wind, and we, travellers again, must ride it!! xo Moki

I so appreciate this post, Terri. And I haven't even listened to the music yet. :) I'm glad for a chance to acknowledge another layer of what we've lost, and also to acknowledge and nurture our hope.

I too have been thinking about how summer has been beautiful as ever, yet, without the easy freedom to share its bounty with our loved ones, it's also passed us by. Talking to a friend on the phone about something else entirely, she said "there is no wasted time," and I took that to heart about this long pandemic season.

I wish I had the technical know-how to set up a virtual gallery where those of us who have lost so many venues and exhibition opportunities because of this virus, could at least share our work, if only among ourselves. I feel that this sense of a creative community is so important.

I'm sending love to all in the Myth and Moor community. With children and husband home since March, and all variety of other experiences and obligations moved online, I haven't felt able to be present here. These are difficult, strange, and sad times. There's still so much to be grateful for, but I too miss what we've lost. Hugs from Seattle.

Monday tunes for my Tuesday morning. All ones I LOVE.
"We'll meet again don't know where don't know when...
https://youtu.be/T5C4meGkNyc

Obviously this idea has been taken up everywhere, but what about if we gathered together a collection of poems based on our individual lockdown experiences? We could call it the 'Covid Codex'. Not a new idea, I know, Boccaccio's 'Decameron' must be among the first collection of writings inspired by a disease, but I'm sure Jane and Wendy, and many others among us, could put an interesting slant on this latter day pestilence.

I love that idea, @Stuart, and would be grateful to read it and/or contribute in some way. I've found myself craving art that directly addresses this new reality.
I'd be happy to share my email address when and if there is interest.
Again, love to all.

Hello Edith, welcome back, it's lovely to hear from you again!

As you say these are sad times and we live in a new reality. I think an artistic/literary reaction to the covid virus could be an interesting exercise, though I'm not sure how precisely this would happen.. If Terri agrees, and obviously ONLY if Terri agrees, perhaps we could see how much interest there is for this, by people contributing to a covid based poetry challenge here on Myth and Moor. Though maybe someone might have a different idea that could work? My own experience of organising such things are, I'm afraid, woefully limited. I hope it's a good idea, but to develop it to a concrete reality I think there needs to be a joint response and discussion.

Stuart, Edith, this is a good idea! Some questions and thoughts:

1. Depending on how public or private folks are imagining a Myth & Moor Community Covid Codex to be, and how widely they'd like to share, submissions and discussion could be conducted via email, twitter, facebook group, letter, google docs or google forms...

2. What do we imagine as a final form? A website/page?

Hello Tara, I think first and foremost there needs to be a certain level of enthusiasm for this idea to work and it has to be said that, so far, enthusiasm has been extremely limited. But, just in case there should be a sudden upsurge of interest, perhaps I should say that I personally saw it as an 'In House' exercise, only to be viewed by the Myth and Moor community; a sort of cathartic releasing of emotions, experiences and personal reactions to the Covid situation. Of course if there'd been lots of quality contributions and the poets themselves had wanted to take things beyond the pages of Myth and Moor, that could have been discussed.

As for the 'poetry challenge', in the past these were set by Terri, who invited us to write a poem around a particular theme.

Anyway, thank you for your interest

Ah, I hadn't seen Terri's poetry challenges before! Thank you for bringing that up, Stuart. I shall look out for them, on this subject or otherwise.

I think it would be a wonderful idea to somehow gather stories and poems that reflect how we perceive and cope with life and other matters during this pandemic. I would be very willing to contribute some of the pieces I have written on this issue to the effort if it should go forward and garner enough interest and enthusiasm. Thanks so much for suggesting this!

I know Terri's wrestling an epic backlog of emails, so I'll make sure she knows about your ideas and we'll get back to you...but do keep adding your thoughts as they come!

In other news, as a single parent, 'in the blink of an eye' is not how my summer went past, but yes, we have missed so much (and gained some). This is when I normally feel the turn inward, but my summer social needs are unmet and there is an awkward vacillation in me. I don't know how, or if, it wil resolve. All is changing...

Well this looks a little more promising! Lots to think about here.