Tunes for a Monday Morning
Oak and stone

We are storytelling animals 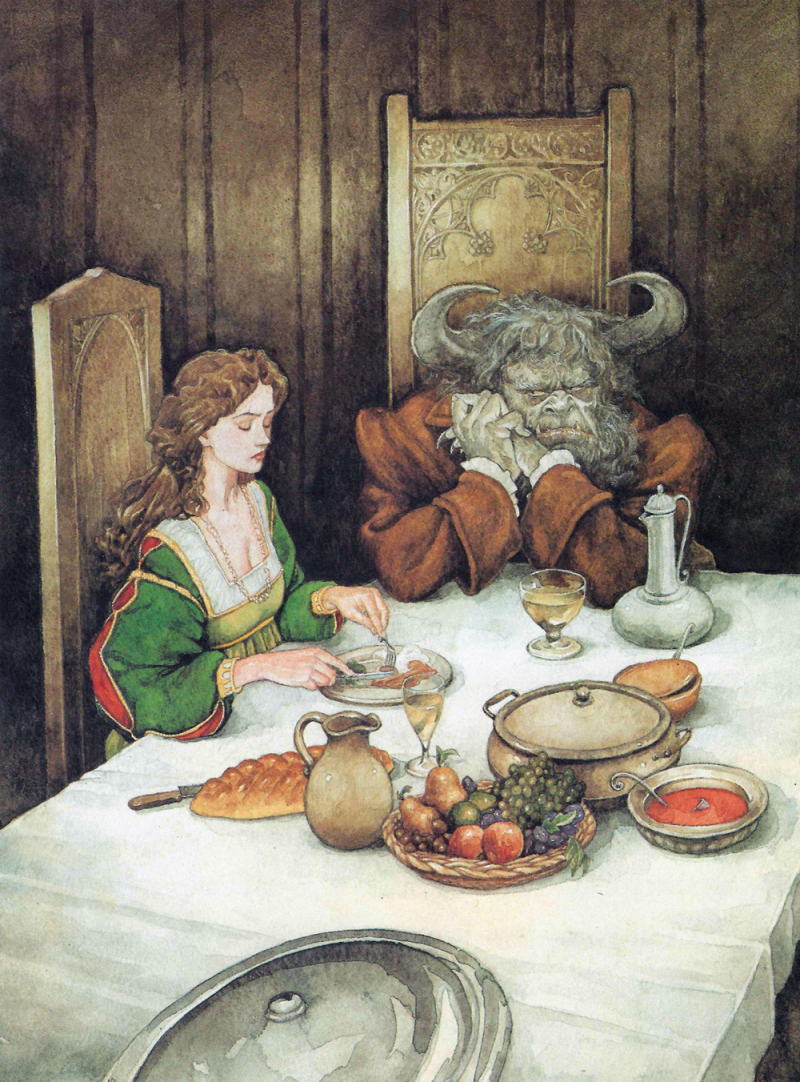 "For me, the literature of the fantastic began with storytelling. After all, humans are storytelling animals. Only we now do most of our storytelling on the page. I am obsessed with stories -- my own and other people's. I want my music and art to tell stories as well. What happened next? is probably the first sentence I ever spoke. And even if it isn't, I can certainly pretend it is since both of my parents are no longer around to contradict me.

"Everyone in the family was a storyteller. Some people called them liars. But the Yolen gene is a storytelling gene. And so it goes. My daughter writes, one son is a musician whose songs tells stories, the other a photographer who captures stories in his lens. When I die, I want my tombstone to read: She wrote many good books and one great one. I will let the readers of that argue over which book I mean. That will force them to read the stories -- and tell their own." 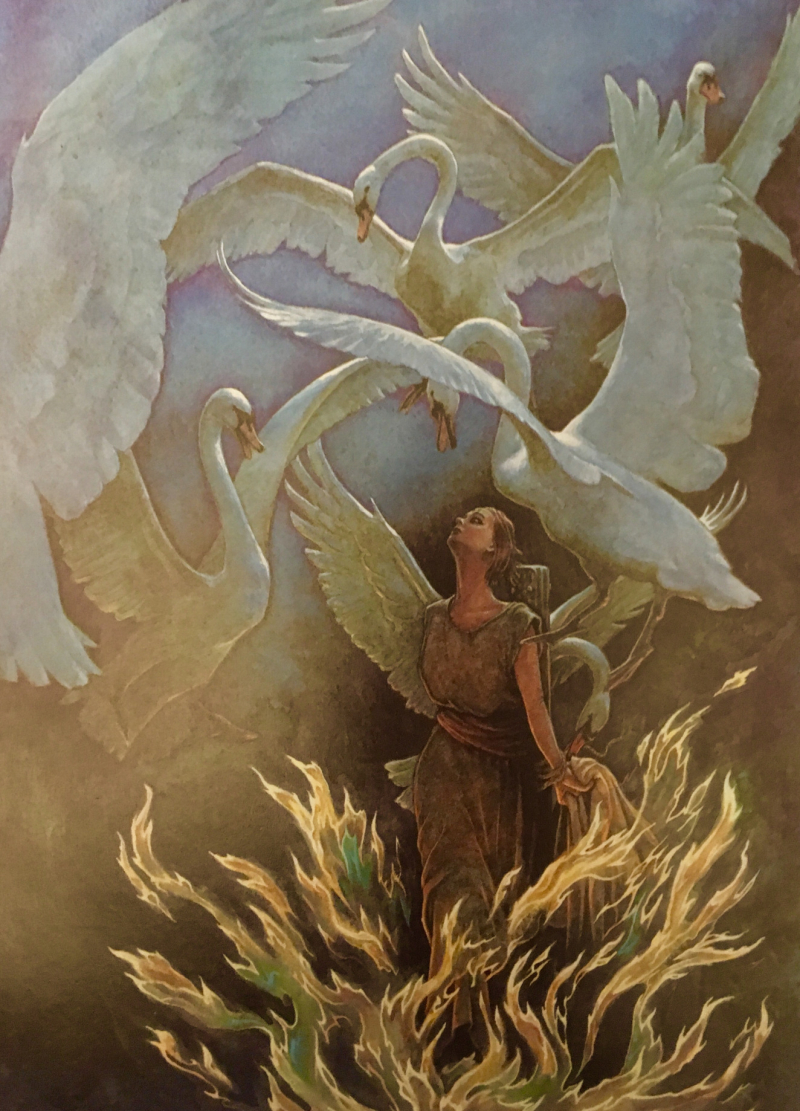 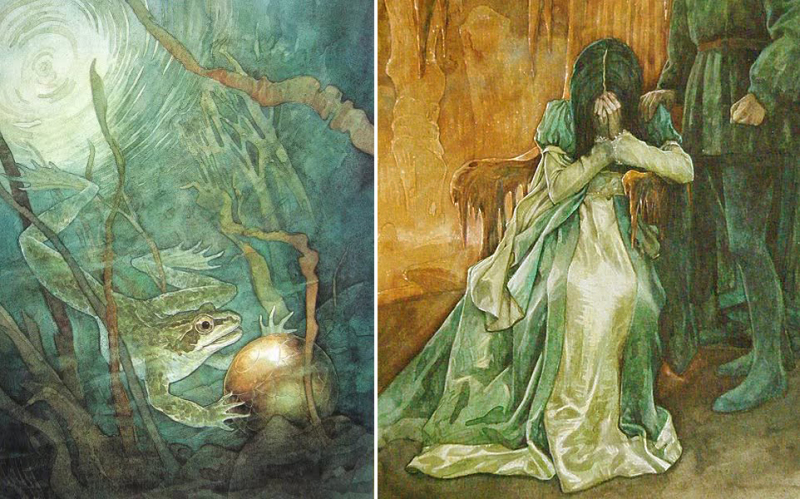 "My family finds me a nuisance when I'm writing a book. It isn't just that I get absent-minded and forget meals. I laugh. In the early days, when I was writing The Ogre

Downstairs, I sat by myself and laughed so much that my children kept coming and asking if I was alright. Later, they got used to it and simply tested me to make sure I'd heard what they said. I became very good at replaying a conversation I hadn't actually known I'd had.

"Now, when the children have long ago grown up, my husband still gets astonished when I laugh as I write.  When I was writing Howl's Moving Castle and nearly fell off the sofa in my mirth, he said, 'You can't be making yourself laugh!' I said, 'No, it's this book that's making me laugh.' That is because, when a book is going as it should, it doesn't feel as if I'm doing it. It takes its own way, and people in it do things I don't expect. This is true however a book comes to me. Charmed Life arrived in my head almost as a complete book, but it was still unexpected. With Archer's Goon, on the other hand, I had almost no idea what was going to happen from one page to the next -- which made it very unexpected.

"But I don't always laugh. Some books, like the Dalemark Quartet, have kept me on the edge of my seat, barely able to breathe. Others, like Fire and Hemlock and Dogsbody, have wrung my heart as I wrote them and taught me things I never thought I knew about people and their feelings.

"I learn things as I write, you see. This is why I enjoy it so much." 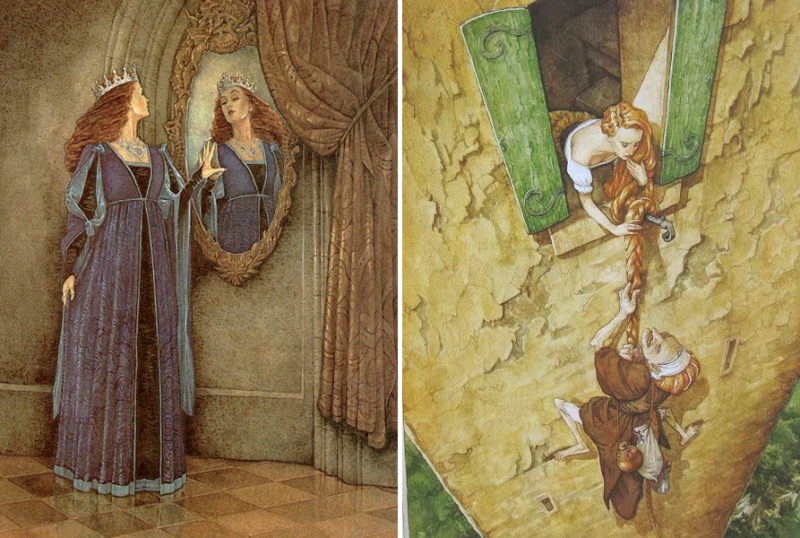 "If I wanted to know where my ideas came from I wouldn't be an imaginative writer, I'd be a scientist. My whole life has been spent daydreaming and out of those ideas and daydreams come stories. It doesn't interest me where daydreams come from, what interests me is helping them grow and blossom into something different, some strange and wonderful tale of mystery and magic. Then again, if you ask a few scientists where they got their ideas from they might tell you they spent most of their life daydreaming and out of those daydreams came something different, some strange and wonderful discovery or invention." 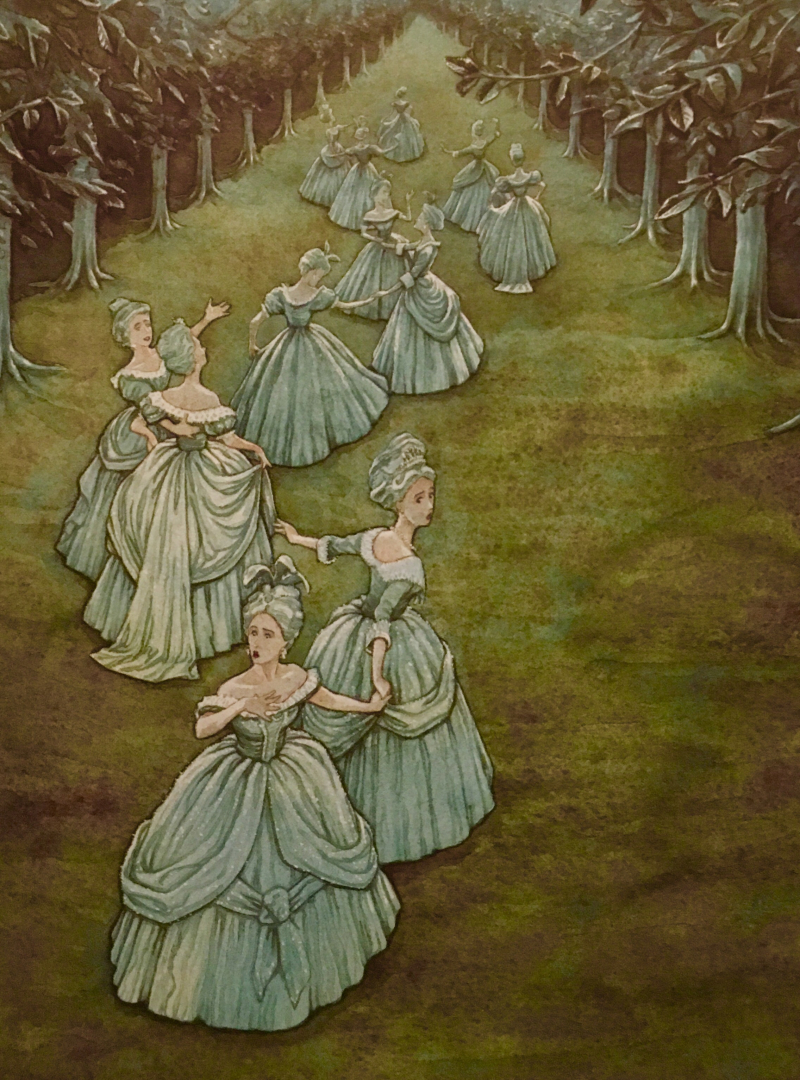 "There were always tales passed from mother to daughter, father to son. Down through the generations they came, so that we would never forget that place, that magic, that elemental and awesome power that abided in our forbears. In each generation the power of the tales rests with us, the storytellers. I weep, I cry with joy, I exult in the God-power of the words.

"And so I have tried to pass them on to another generation, to keep alive the mortal power of our earlier selves, even as the world changes and dies, sleeps and awakes anew to the force that gives life to our souls. So that some child can hear the tales and find them awakened in herself to pass on to yet another generation. " 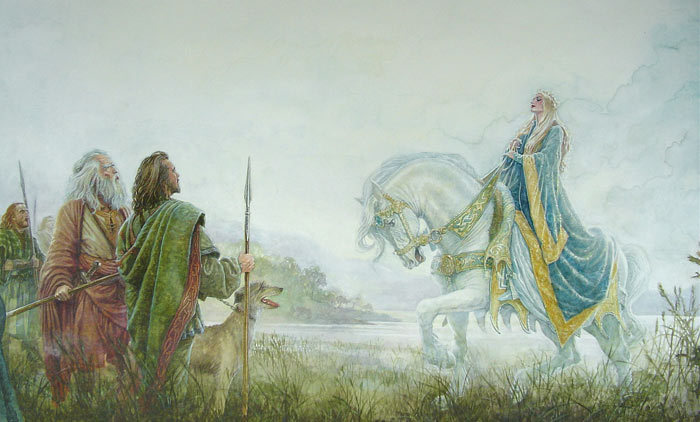 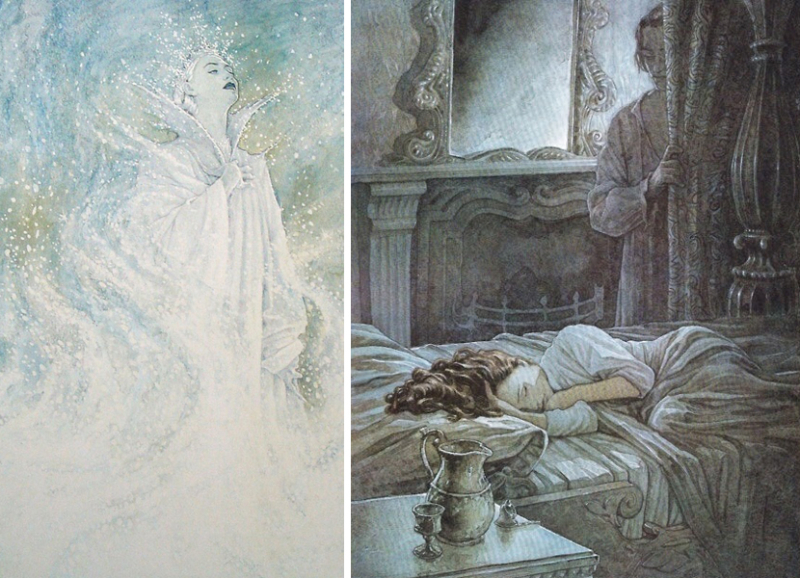 The paintings here are by Irish book artist P.J. Lynch. Born and raised in Belfast, he used drawing and reading, he says, "as a way of escaping from the horrors that were happening around me in the real world." After studying at the Brighton College of Art, he became an illustrator in 1984 -- going on to win two Kate Greenaway Medals for excellence in children's illustration. His many books include Fairy Tales of Ireland, East of the Sun and West of the Moon, The Candlewick Book of Fairy Tales, The Snow Queen, Catkin, The King of Ireland's Son, The Bee-Man of Orn, A Christmas Carol, and The Gift of the Magi.

"My first book, A Bag Of Moonshine by Alan Garner, was probably the thing that decided my career," he recalls. "I was lucky enough to win the Mother Goose Award for my illustration work on that book. That led to other book commissions and I’m still at it thirty years later. Maybe if I hadn’t won that prize I might have specialised in a different type of painting, but I am very glad that I did. I can’t think of a nicer career than making illustrated books."

To see more his enchanting work, please visit his website and blog. 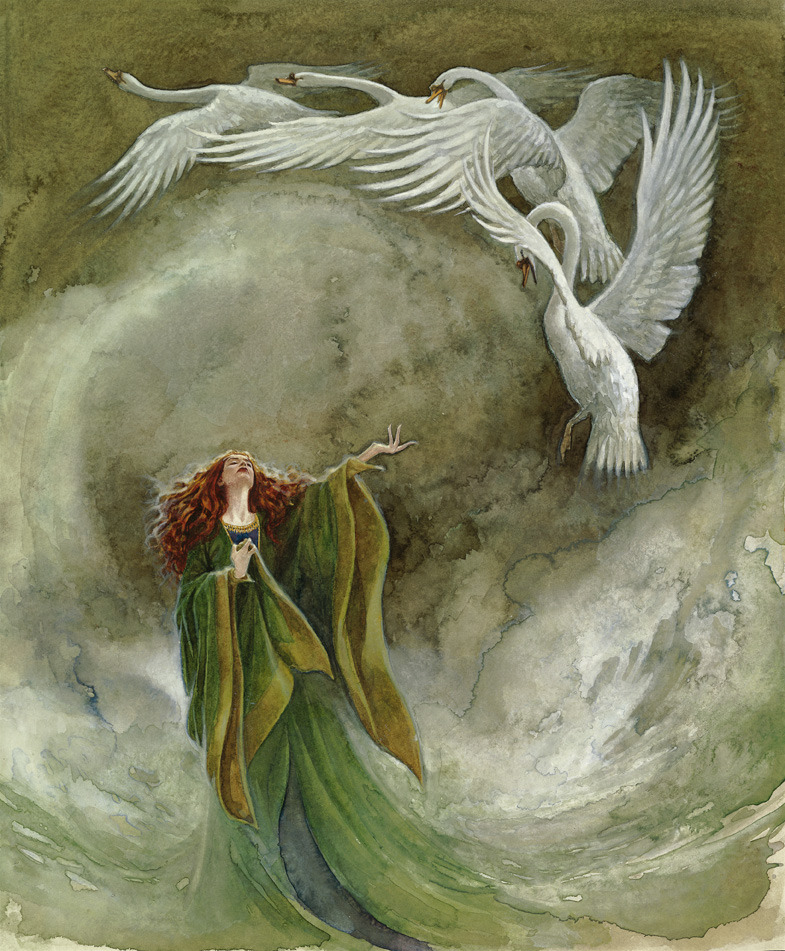 All rights to the art and text above reserved by the artist and the authors, or their estates. Painting titles can be found in the picture captions. (Run your cursor over the images to see them.)

This is beautiful and comforting, inspiring and thirst-quenching. As the thick wild fire smokes clot the air up and down the western coastline of the U.S. we are tucked into our wagon. The whirl of the air filter, and stories (both here and in my still fertile imagination) make it possible to see a future I can love. These quotes do feed the storyteller's gene in me. Air is important, no doubt. But without stories to breathe there would be no air. Thank you so much for this!

Thank you, Terri. I'm particularly moved by the quote from Walton. I've often wondered, barely published as I am, that maybe writing stories is a vain pursuit after all. But this quote helps me remember the importance of attempting to pass forward what I've learned in the hopes of inspiring others to tell their own stories someday. Blessings.

Wonderful and inspiring quotes today. As a side note, I met and had dinner with P.J. last summer in Dublin. A lovely charming man and a terrific artist. He has the first book both wrtten and illustrated by himself, The Haunted Lake coming out this Fall.

I really do appreciate each and every one of these quotes. Thank you-

I read gravestones
the way other people read books
to find out how things began,
how they ended.
I read with my eyes
and fingers,
taking the mold of the letters,
the insights of serif.
But I make up the in-between.
I do not need to know the actual.
Everyone has an actual.
But they also each have a secret truth.
That's what I want to read.
and so, I write it myself.