The books that shape us: Margaret Atwood 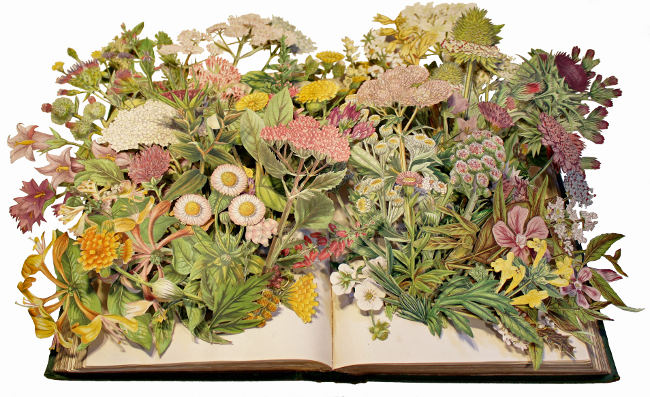 From an essay by Margaret Atwood in The Pleasure of Reading, edited by Antonia Fraser:

"I learned to read before I started school. My mother claims I taught myself because she refused to read comics to me. Probably my older brother helped: he was writing comic books himself, and may have needed an audience. 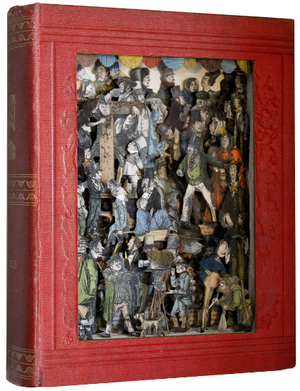 "In any case, the first books I can remember are a scribbled-over copy of Mother Goose and several Beatrix Potters, from her Dark Period (the ones with knives, cannabilistic foxes, and stolen babies in them). Then came the complete, unexpurgated Grimms' Fairy Tales, which my parents ordered by mail, unaware that it would contain so many red-hot shoes, barrels full of nails, and mangled bodies. This was in the 1940s, just after the war. It was becoming the fashion, then, to rewrite fairy tales, removing anything too bloodthirsty and prettying up the endings, and my parents were worried that all the skeletons and gouged-out eyes in Grimms' would warp my mind. Perhaps they did, although Bruno Bettleheim has since claimed that this sort of thing was good for me. In any case I devoured these stories, and a number of them have been with me ever since.

"Shortly after this I began to read everything I could get my hands on. At that time my family was spending a lot of time in the northern Canadian bush, where there were no movie theaters, and 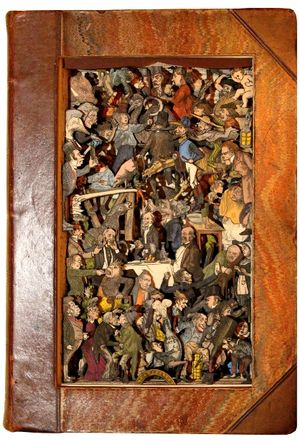 where even radio was unreliable: reading was it. The school readers, the notorious milk-and-water Dick and Jane series, did not have much to offer me after Grimms'. See Jane Run, indeed. Instead I read comic books and the backs of cereal boxes. I tried 'girls' books' -- The Bobbsey Twins by Laura Lee Hope, The Curleytops series by Howard Garis, Cherry Ames, Junior Nurse -- but they weren't much competition for Batman or the red-hot iron shoes. (Anne of Green Gables was an exception; that one I loved.) I made my way through the standard children's classics, some of which I'd already heard, read aloud by my mother -- The Wonderful Wizard of Oz by L. Frank Baum, the Alice books, Treasure Island. Gulliver's Travels is not really a children's book, but was considered one because of the giants, so I read that too.

"I read Canadian animal stories -- those by Sir Charles G.D. Roberts and Ernest Thompson Seton, for instance -- in which the animals always ended up dead. Such books appeared regularly at Christmas -- adults seemed to think that any book about animals was a children's book -- and I would snivel my way through the trapped, shot and gnawed corpses of the various rabbits, grouse, foxes and wolves that littered their pages, overdosing on chocolates. I read Orwell's Animal Farm, thinking that it too was a story about animals, and was seriously upset by the death of the horse." 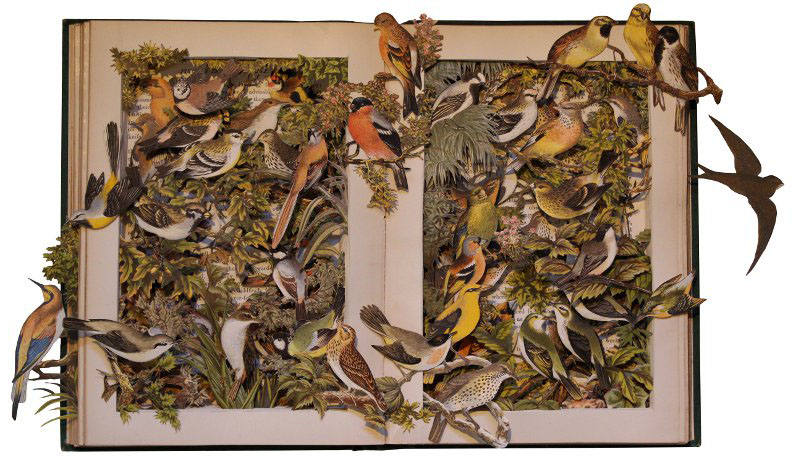 Later in the essay, Atwood discusses her reading as an adolescent, ranging from pulp science fiction to Austen and the Brontes. And then, during the years her family lived in Toronto, she discovered the cellar. 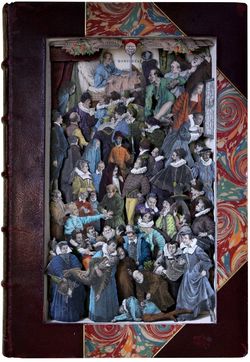 "My parents had two vices which I have inherited -- they bought a lot of books, and they found it difficult to throw any of them out. The cellar was lined with bookshelves, and I used to go down there and browse among the books, while eating snacks filched from the kitchen -- crackers thickly spread with peanut butter and honey, dates prized off the block of them used for baking, handfuls of raisins, and -- one of my favorites -- lime jelly powder. The whole experience felt like a delicious escape, and my eclectic eating habits complemented what I was reading, which ranged from scientific textbooks on ants and spiders -- my father was an entymologist -- to H.G. Wells' history of almost everything, to the romances of Walter Scott, to old copies of National Geographic, to the theatrical murders of Ngaio Marsh. This is where I came across Churchill's history of the second world war, Orwell's 1984, and Arthur Koestler's Darkness at Noon -- books which did, much later, actually have an influence on something I wrote myself, as The Handmaid's Tale emerged from the same fascination with history and the structure of totalitarian regimes. 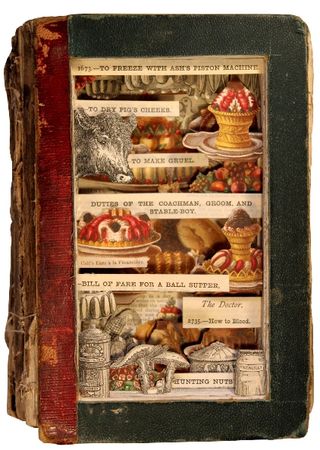 "All this took place quite apart from school. At school I was practical, and saw myself as someone who would eventually have a serious job of some kind. The drawback to this was that there were only five careers listed for women in the Guidance textbook: home economist, nurse, teacher, airline stewardess, and secretary. Home economists got paid the most, but I was not good at zippers. This was depressing. I read more.

"In English, we were studying a Shakespeare play a year, a good deal of Thomas Hardy and some George Eliot, and a lot of poetry, most of it by the romantics and the Victorians. Writing -- unlike reading -- appeared to be something that had been done some time ago, and very far away. In those days the Canadian high school had not yet discovered either modern poetry or Canada itself; 'Canadian writer' seemed to be a contradiction in terms; and when I realized at the age of sixteen that writing was what I wanted to do with the rest of my life, nobody was more surprised than I was." 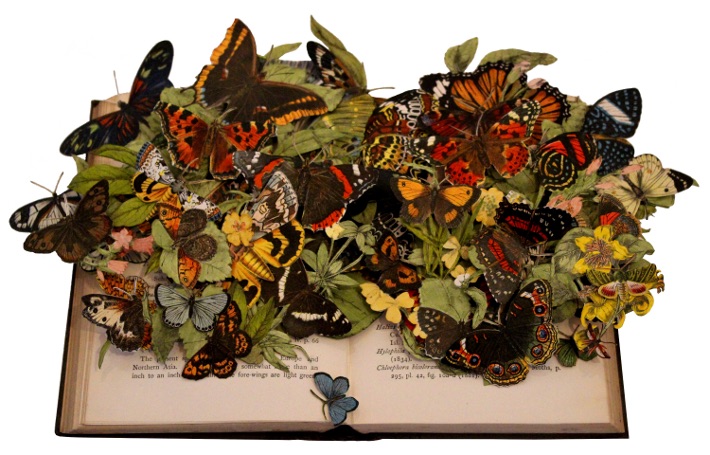 The art today is by Kerry Miller,  a British "book sculptor" who turns discarded texts into whimsical wonders.

"After many years of working in collage and mixed media," she writes, "I began exploring ways of using old, discarded books, experimenting with deconstructing and rebuilding them to produce unique pieces of artwork. The books are variously sourced and are carefully selected for their illustrations and character, whilst taking into account my perception of how the finished piece will look. 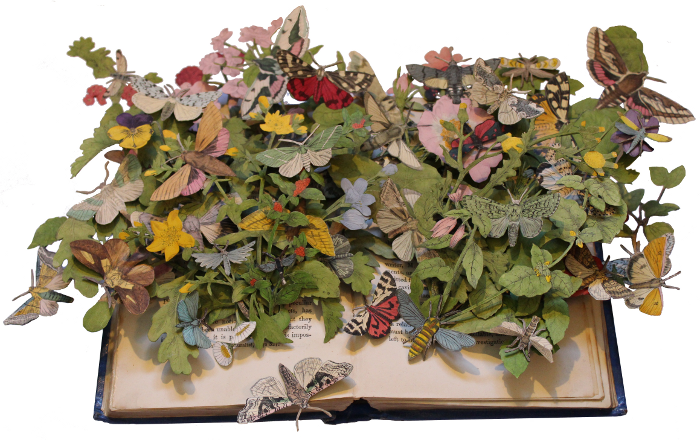 "For each piece I work on, only the illustrations found within that particular book are used. Colour is added using inks or watercolours where I consider that they will enrich and enhance the final effect, giving a sense of depth and energy. These intricately worked 3D books provide tantalising glimpses into a rich past, becoming miniature worlds that allow the viewer to simply tumble into them.

"My work is a means of distilling the essence of a book, whilst releasing the images and allowing them to reach a new audience. I view it as a collaboration, a partnership with the past, giving new purpose to old volumes that may otherwise never see the light of day or simply end up in recycling. As technology threatens to replace the printed word, there has never been a better time to reimagine the book." The passage by Margaret Atwood above comes from The Pleasure of Reading, edited by Antonia Fraser (Bloomsbury, 1992); I recommend reading the essay in full. All rights to the text and art above are reserved by the author and artist.

in From the archives | Permalink | Comments (4)

I get really irritated by those people who say they could read before they went to school, like Margaret Atwood does here. I lived with one person for fourteen years who made such a claim and have lived with another for twenty years (so far) who says the same! Unfortunately both seem to be true! And why do so many claim such eclectically esoteric reading matter in their formative years! I couldn't read until I was seven and then read Enid Blyton almost exclusively for the next seven; I'm sure there must be others somewhere who had similar experience but very few seem prepared to admit to it. Of course, this post is driven entirely by jealousy which isn't surprising when you consider I have one friend who says she was reading Homer at a ludicrously early age, though she does concede it was 'only in translation'. I've never asked, but I suspect she was reading it in the original Greek by the time she was ten.

Alas, I'm one of those people too, Stuart -- though I stuck to Beatrix Potter, not Home. :)

Both my girls read a whole book by themselves aged three. The book is Hug by Jez Alborough. The whole, lovely, story is told with the words 'hug', 'Mama', and 'Bobo'.
10yo still reads Blyton, though I am weaning her onto Pratchett with Nation.
And I also could read before I went to school, but at 42 have not read Homer and do not plan to.
Does that help Stuart?

And Terri, I am loving this book art. The idea of cutting into a book gives me the shudders, but if I could make something this beautiful...

Well now you're going to the opposite extreme! Not having read Homer by the age of 42 just isn't acceptable! Perhaps you could begin a process of acclimatisation by reading Virgil's 'Aeneid' first of all . Roman not Greek, of course, but we all have to start somewhere.