The books that shape us: A.S. Byatt 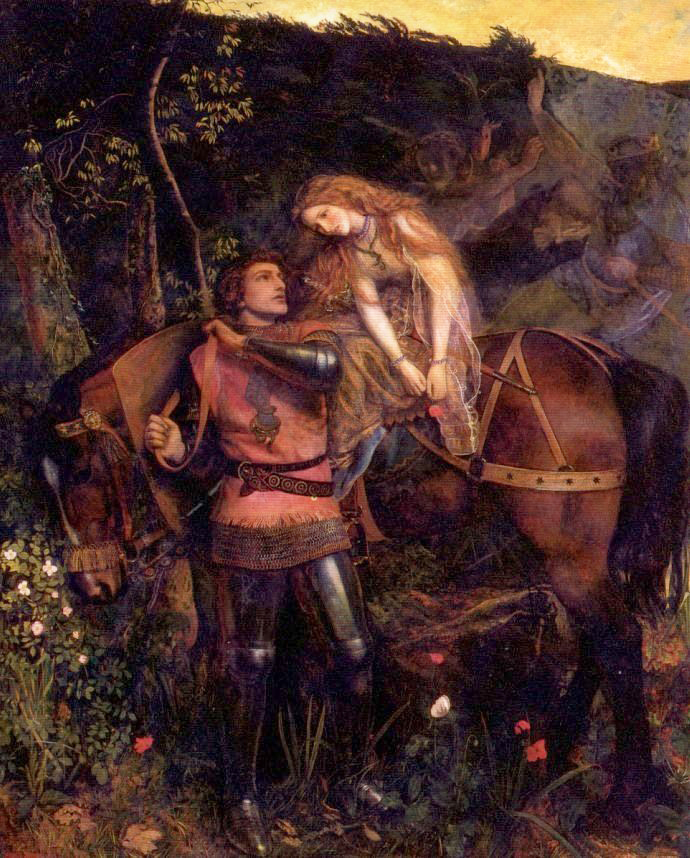 From an essay by A.S. Byatt in The Pleasure of Reading, edited by Antonia Fraser: 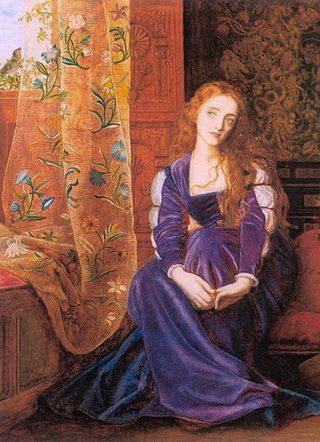 "The roots of my thinking are a tangled maze of myths, folktales, legends, fairy stories. Robin Hood, King Arthur, Alexander of Macedon, Achilles and Odysseus, Apollo and Pan, Loki and Baldur, Sinbad and Haroun al Rashid, Rapunzel and Beauty and the Beast, Tom Bombadil and Cereberus. I have no idea now where I got all this, except for the Norse myths, which came from a turn of the century book, Asgard and the Gods, bought by my mother as a crib for her Ancient Norse and Icelandic exams at Cambridge. I read the Fairy Books of Andrew Lang and several collections of ballads, and 'How Horatio Kept the Bridge' from Macaulay's Lays of Ancient Rome. The tales and myths and legends...made it clear that there was another world, beside the world of having to be a child in a house, an inner world and a vast outer world with large implications -- good and evil, angels and demons, fate and love and terror and beauty -- and the comfort of the inevitable ending, not only the happy ending against odds, but the tragic one too. 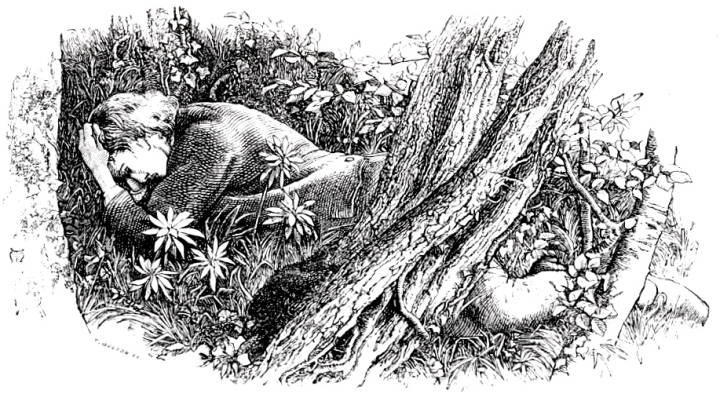 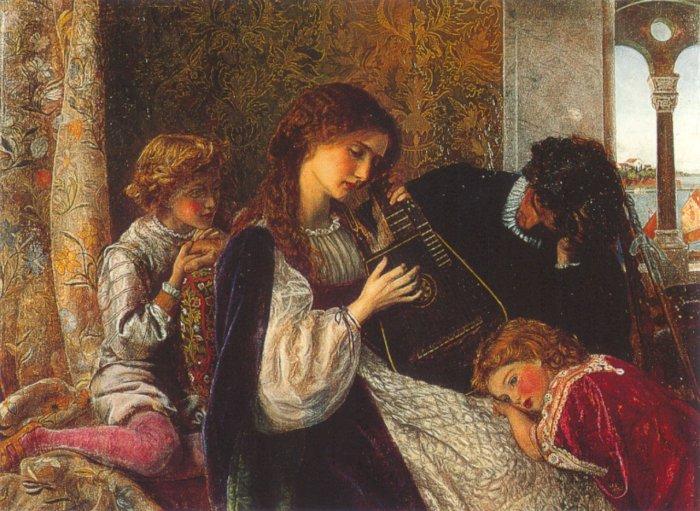 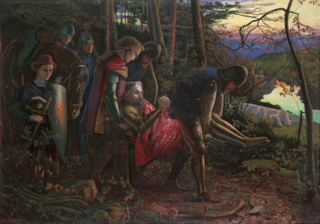 "At the same time, and just as early, I remember the importance of poetry, Nursery rhymes, ballads, the 'Jackdaw of Rheims' from Richard Barham's The Ingoldsby Legends and A.A. Milne's Now We Are Six, 'The Rime of the Ancient Mariner' and 'Slowly silent now the moon' by Walter de la Mare. I think one of the most important writers to me ever has been Walter de la Mare, though it is a debt hard to recognize or acknowledge. Partly for the singing strange rhythms of his poetry, partly for the strange worlds and half-worlds he gave one glimpses of, the world of a pike suspended in thick gloom under a bridge, the journeyings of the Three Mulla Mulgars, which I read over and over. The most important poems were three coloring books we had, a page of poetry beside a picture, all three complete stories: The Pied Piper, Tennyson's 'The Lady of Shalott,' his Morte d'Arthur. I knew them all by heart long before I thought to ask who had written them. Their rhymes haunt everything I write, especially the Tennyson. The enclosed weaving lady became my private symbol for my reading and brooding self long before I saw what she meant for him, and for 19th century poetry in general. 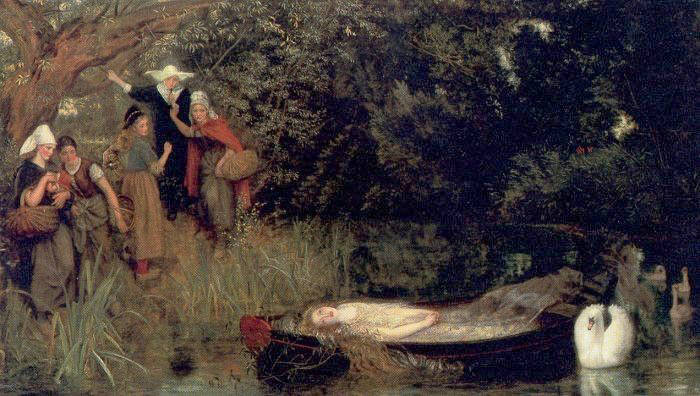 "Truthfulness forces me to admit that we did not have that great anthology of magical and narrative verse, de la Mare's Come Hither, but we were brought up on its contents by my mother, who gave us poems and more poems, as though it was unquestionable that this was the very best thing she could do for us. 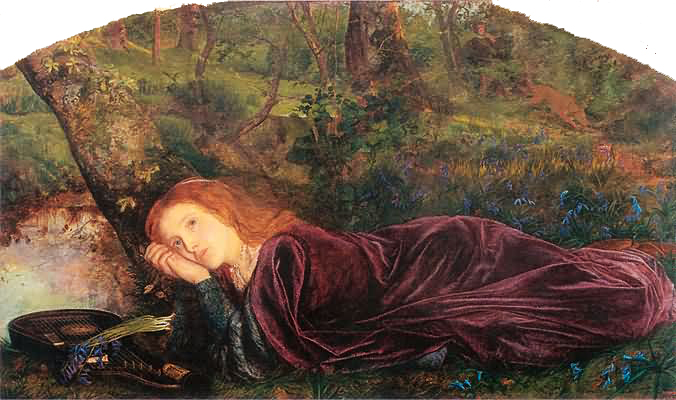 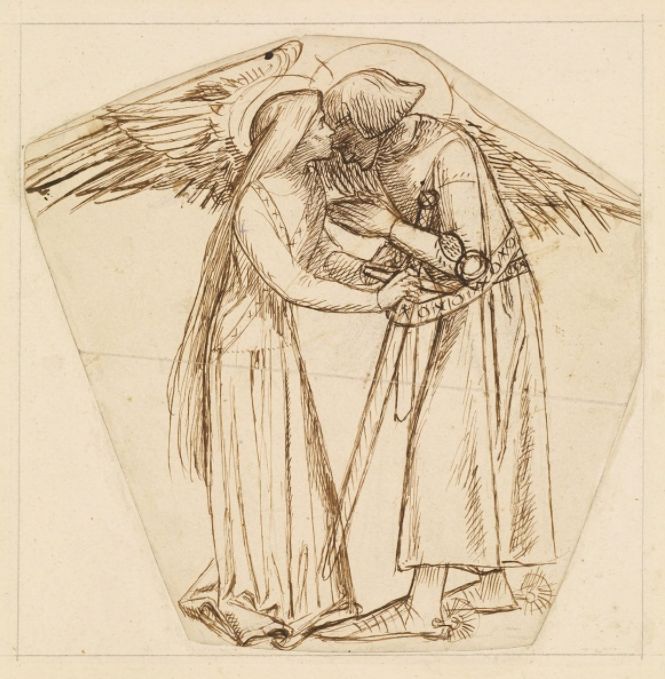 "What about fiction, as opposed to fairy tales? What I remember most vividly is learning fear, which I think may be important to all animals -- I used to love the song from The Jungle Book -- 'It is fear, oh little hunter, it is fear.' And I remember Blind Pew tapping, the terrible staircase and the heather-hunting in Kidnapped, I 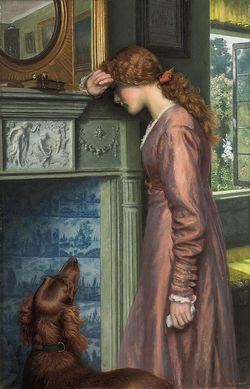 remember Jane Eyre locked in the Red Room, and poor David Copperfield at the mercy of Mr. Murdstone, the horrors of Fagin in the condemned cell (I could only have been eight or nine) and worst of all (though I still have nightmares about executions) Pip on the marshes being grabbed by Magwitch in that brilliant and terrible beginning of Great Expectations. I must have been very little. I didn't understand any more than Pip that Magwitch's terrible companion was fictive.

"I remember my first meeting with evil, too, and it has only just recently struck me how strange that was. I worked my way along my grandmother's shelf of school prizes -- was I nine or ten? Or younger? And read Uncle Tom's Cabin before anyone had told me that slaves had really existed outside The Arabian Nights. Tom's sufferings and the evil of the system and the people who killed him, with cruelty or negligence, made me feel ill and appalled. I never talked to anyone about it. We sang about Christ's suffering in church but that seemed comparatively comfortable and institutional and had after all a happy ending, whereas Tom's story did not. And yet one is grateful for the glimpses of the dark: as long as they do not destroy, they strengthen." 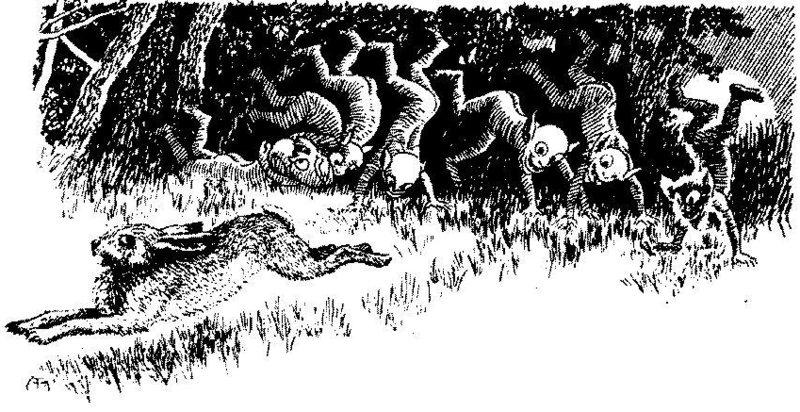 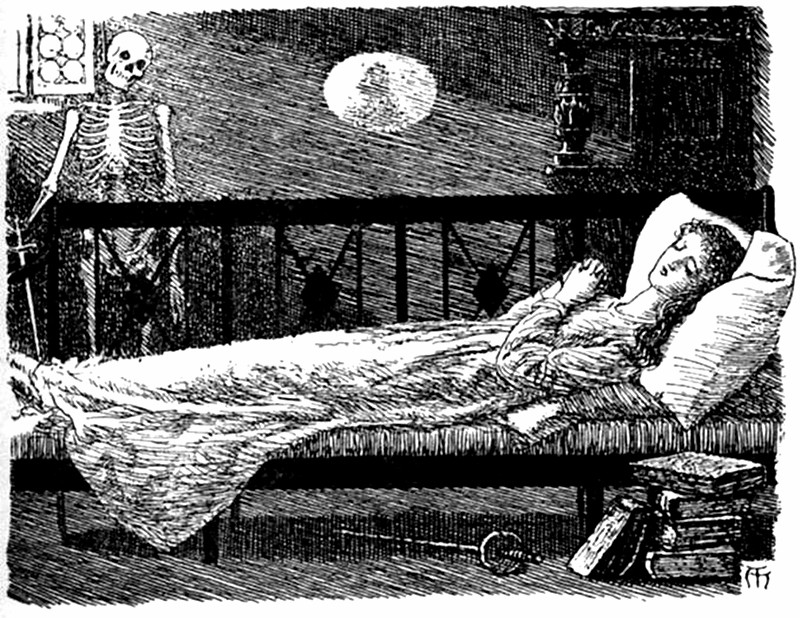 The art today is by Arthur Hughes, a Victorian painter associated with the Pre-Raphaelite movement. Born in London in 1832, Hughes studied art at Somerset House and the Royal Academy, and had his first picture accepted for a Royal Academy exhibition when he was only 17. Upon meeting Rossetti and other members of the original Pre-Raphaelite Brotherhood, Hughes pledged himself to the Brotherhood's cause and spent the rest of his life creating paintings and drawings rooted in Pre-Raphaelite ideals. He was also a leading book illustrator in what was known as the "Sixties Group," remembered best today for his classic drawings for the fantasy novels of George Macdonald. The artist was married (to the model for his painting "April Love") and had six children, one of whom became a successful landscape painter.  (The "fairy painter" Edward Robert Hughes was Arthur Hughes' nephew.) The artist died at home in London in 1915, after a long and prolific career. 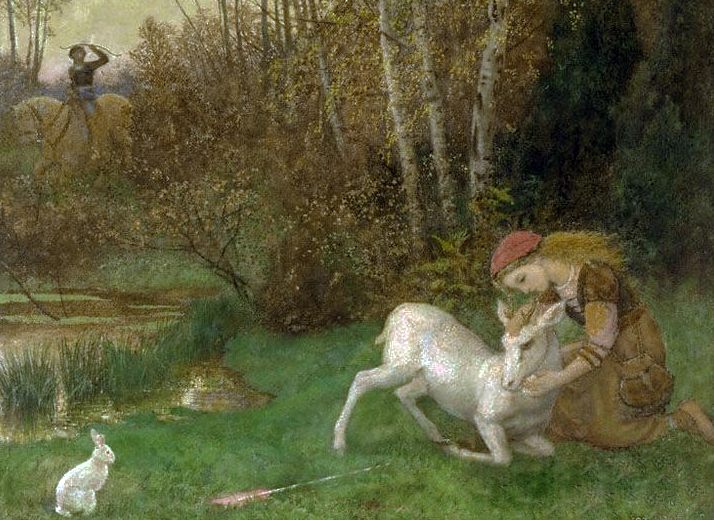 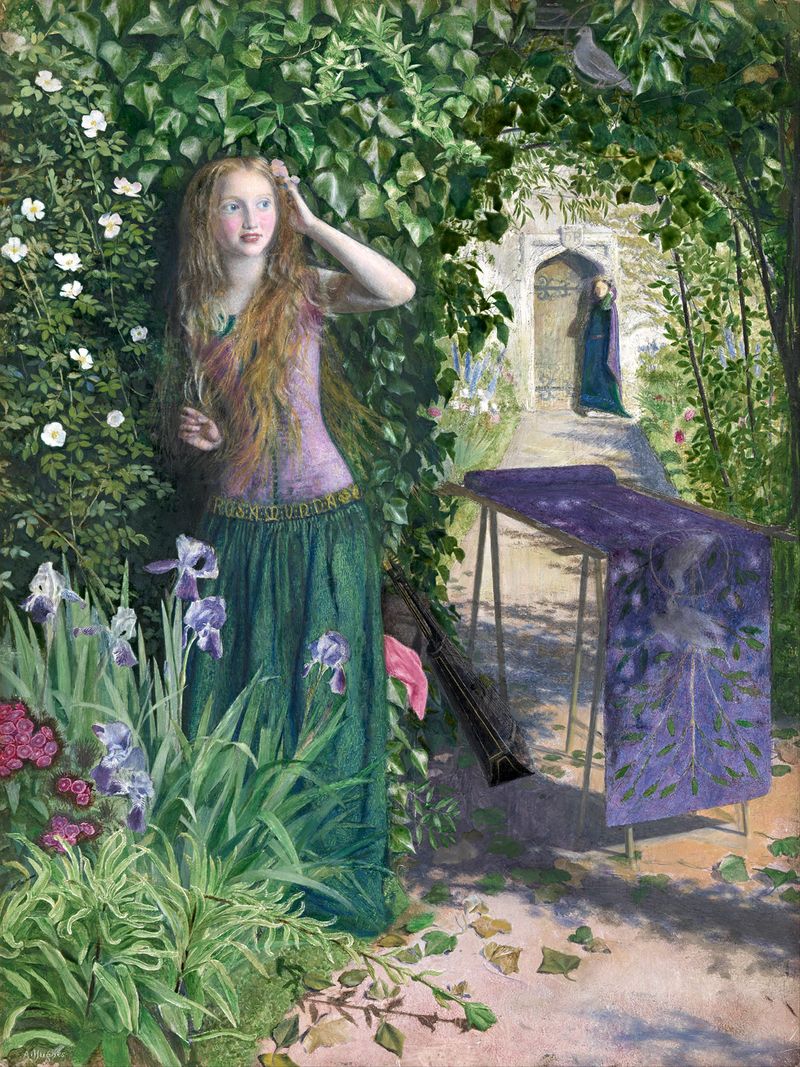 The passage above comes from The Pleasure of Reading, edited by Antonia Fraser (Bloomsbury, 1992); I recommend reading A.S. Byatt's essay in full. All rights reserved by the author.

in From the archives | Permalink | Comments (5)

LOVED THIS POST.Thanks so much.Hughes is wonderful and the Byatt rememberence similar to my own.My Mum always read poetry to me and I thank her for starting me off on a good road.She is 97 and failing but the only thing she still does is read poetry.Her memory is short and now poetry is great for her.

The bee hovers
around a rose
and his fuzz becomes fur
that becomes the coat
of a "Beast."

A girl wanders
into the garden, her gown
spun of silk, her presence
of beauty and "Beauty" spun
into the heroine
of a magic history.

At night when the moon
melts on the glass
of a cottage window,

the candle on the rim
of silver, the witness who saw this
melts into words
and words into paragraphs.

Page after page,
until they're bound
in a lavender book ;
and I'm bound by its spell,
shaped by knowing

that anyone or thing
can change, arise from the curse
of their own nature --

the cast - off shadow
of a thorn.

Thanks Wendy for the image

"The cast-off shadow of a thorn"--Wendy Howe

what makes a poem?
The cast-off shadow of a thorn,
The torn wing of a moth's distress,
the moment before a blossom opens,
raindrops drumming on open ground,
the race of water through a sorrowing cleft,
throat of a wren beating in song,
the stained glass wings of a dragonfly in flutter,
parenthesis of a mole asleep in its hole,
trees in full mamba in a storm.
And always, that cast-off shadow of a thorn.

Yes!!! You capture what makes the intensity and the meaning of a poem so powerful in your beautiful words. This is a gorgeous poem; and I have personally seen, felt and been so awestruck by these happenings :

"the race of water through a sorrowing cleft,
throat of a wren beating in song,
the stained glass wings of a dragonfly in flutter"

They are truly gifts of nature and ones we can learn from and be inspired by. I love this piece!! Thank you so much for sharing it; and I am glad that image worked for you this lovely poem came about.

Take care
my best to you and yours. Stay safe and be well!
Wendy