In the eye of the storm
Wonder, peril, and transformation 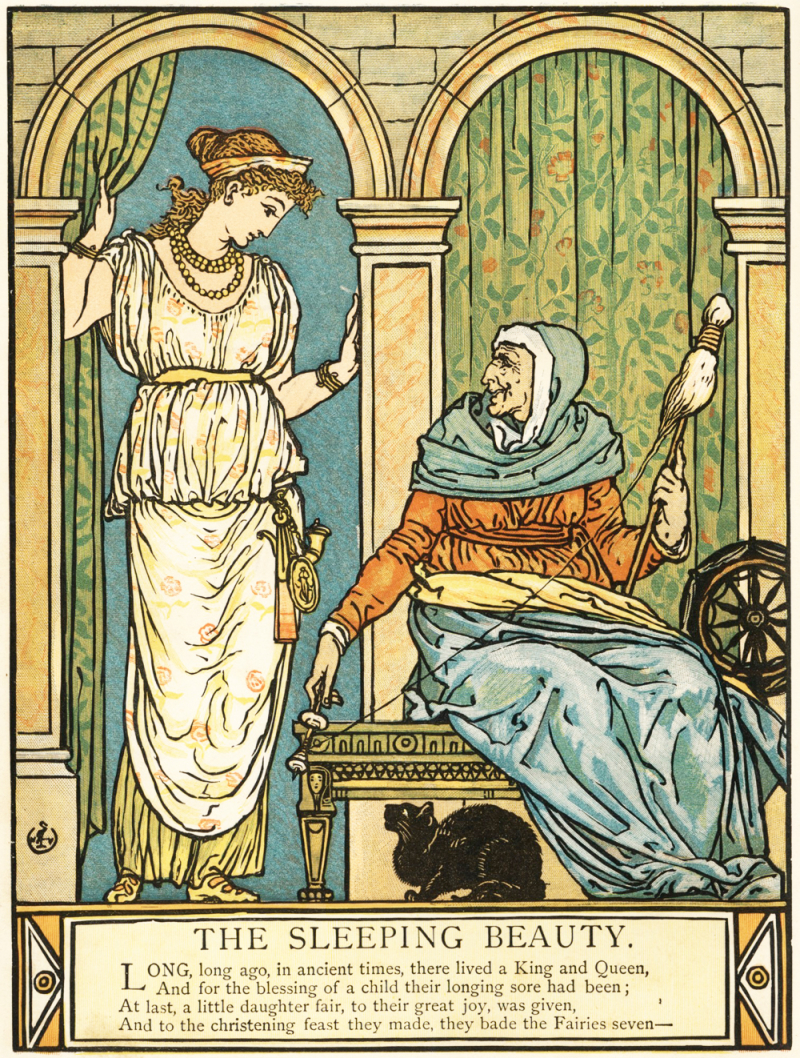 From "To Love Justice" by bell hooks:

"Fairy tales were the refuge of my troubled childhood. Despite all the lessons contained in them about being a dutiful daughter, a good girl, which I internalized to some extent, I was most obsessed with the idea of justice -- the insistence in most tales that the righteous would prevail. The evocation of a just world, where right would prevail over wrong, was a balm to my wounded spirits during my childhood. It was a source of hope. In the end I could believe that no matter the injustices I suffered, truth would come to light and I would be redeemed. Indeed, the message of redemptive love shared in so many beloved fairy tales sustained me." 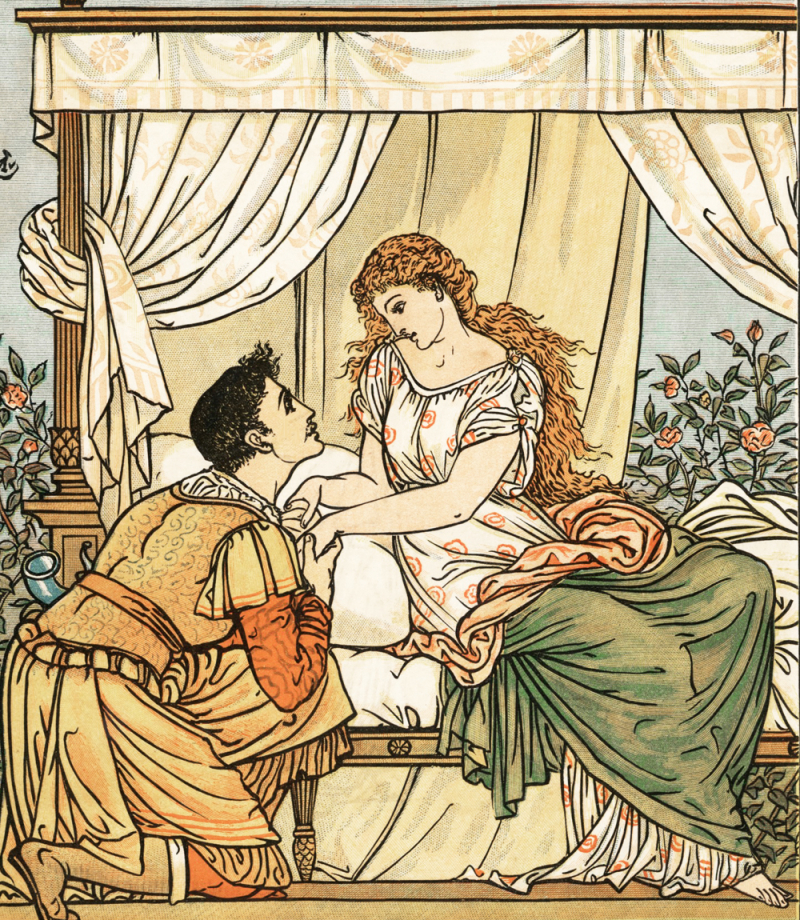 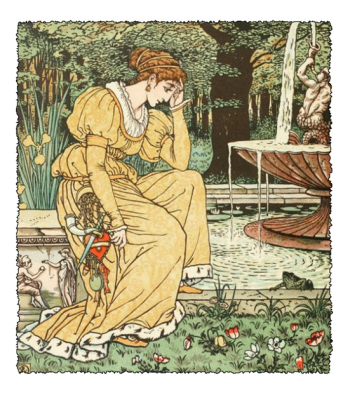 "If you really read the fairy-tales you will observe that one idea runs from one end of them to the other -- the idea that peace and happiness can only exist on some condition. This idea, which is the core of ethics, is the core of the nursery-tales. The whole happiness of fairyland hangs upon a thread, upon one thread. Cinderella may have a dress woven on supernatural looms and blazing with unearthly brilliance; but she must be back when the clock strikes twelve. The king may invite fairies to the christening, but he must invite all the fairies or frightful results will follow. Bluebeard's wife may open all doors but one. A promise is broken to a cat, and the whole world goes wrong. A promise is broken to a yellow dwarf, and the whole world goes wrong. A girl may be the bride of the God of Love himself if she never tries to see him; she sees him, and he vanishes away. A girl is given a box on condition she does not open it; she opens it, and all the evils of this world rush out at her. A man and woman are put in a garden on condition that they do not eat one fruit: they eat it, and lose their joy in all the fruits of the earth. 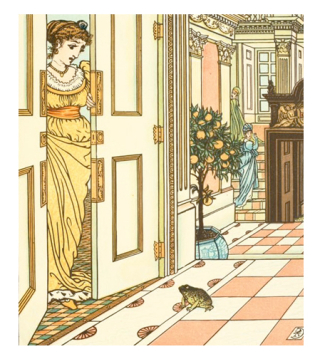 "This great idea, then, is the backbone of all folk-lore -- the idea that all happiness hangs on one thin veto; all positive joy depends on one negative. Now, it is obvious that there are many philosophical and religious ideas akin to or symbolised by this; but it is not with them I wish to deal here. It is surely obvious that all ethics ought to be taught to this fairy-tale tune; that, if one does the thing forbidden, one imperils all the things provided. A man who breaks his promise to his wife ought to be reminded that, even if she is a cat, the case of the fairy-cat shows that such conduct may be incautious. A burglar just about to open some one else's safe should be playfully reminded that he is in the perilous posture of the beautiful Pandora: he is about to lift the forbidden lid and loosen evils unknown. The boy eating some one's apples in some one's apple tree should be a reminder that he has come to a mystical moment of his life, when one apple may rob him of all others. This is the profound morality of fairy-tales; which, so far from being lawless, go to the root of all law." 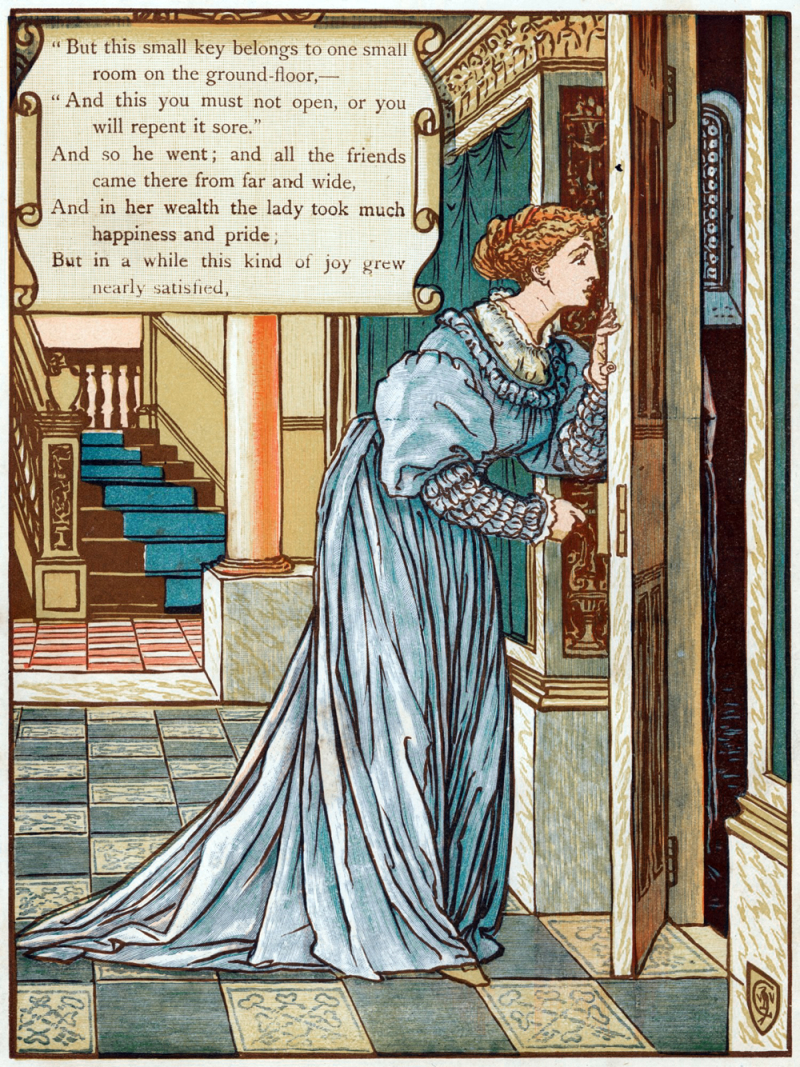 From What It Is by Lynda Barry:

"There are certain children who are told they are too sensitive, and there are certain adults who believe sensitivity is a problem that can be fixed in the way that crooked teeth can be fixed and made straight. And when these two come together you get a fairy tale, a kind of story with hopelessness in it. I believe there is something in these old stories that does what singing does to words. They have transformational capabilities, in the way melody can transform mood. They can't transform your actual situation, but they can transform your experience of it. We don't create a fantasy world to escape reality, we create it to be able to stay. I believe we have always done this, used images to stand and understand what otherwise would be intolerable." 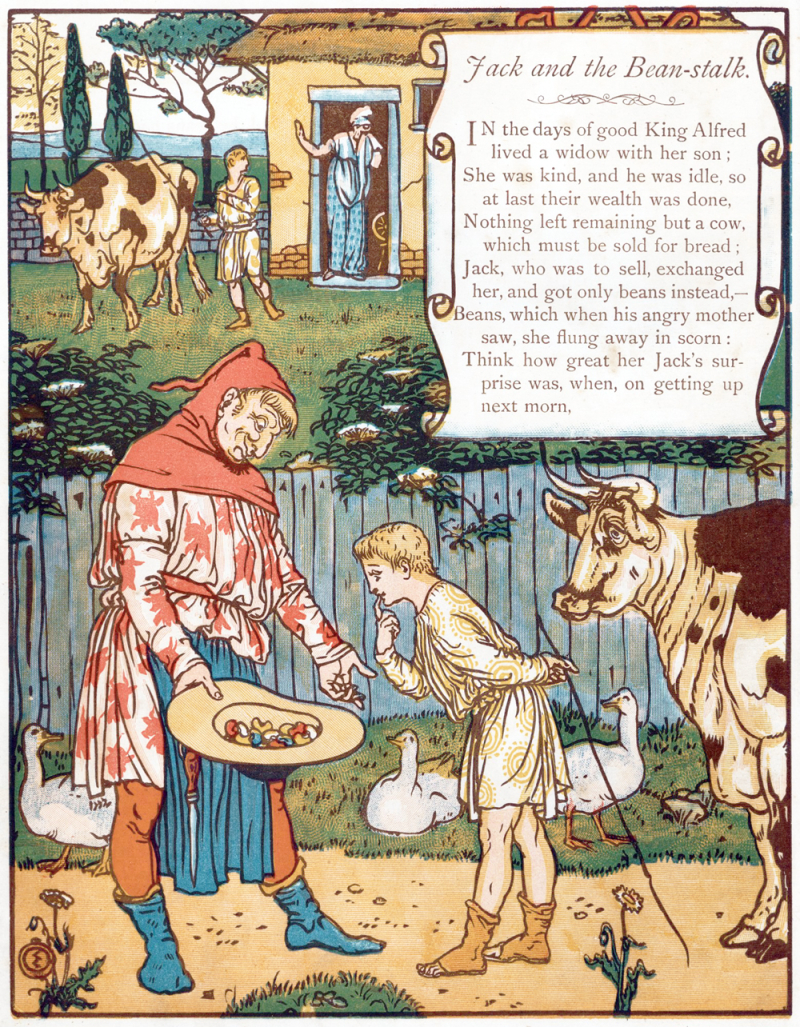 From "Why Our Future Depends on Libraries, Reading, and Daydreaming" by Neil Gaiman:

"Fiction can show you a different world. It can take you somewhere you've never been. Once you've visited other worlds, like those who ate fairy fruit, you can never be entirely content with the world that you grew up in. Discontent is a good thing: discontented people can modify and improve their worlds, leave them better, leave them different. And while we're on the subject, I'd like to say a few words about escapism. I hear the term bandied about as if it's a bad thing. As if 'escapist' fiction is a cheap opiate used by the muddled and the foolish and the deluded, and the only fiction that is worthy, for adults or for children, is mimetic fiction, mirroring the worst of the world the reader finds herself in. If you were trapped in an impossible situation, in an unpleasant place, with people who meant you ill, and someone offered you a temporary escape, why wouldn't you take it? And escapist fiction is just that: fiction that opens a door, shows the sunlight outside, gives you a place to go where you are in control, are with people you want to be with (and books are real places, make no mistake about that); and more importantly, during your escape, books can also give you knowledge about the world and your predicament, give you weapons, give you armour: real things you can take back into your prison. Skills and knowledge and tools you can use to escape for real.

"As J.R.R. Tolkien reminded us, the only people who inveigh against escape are jailers." 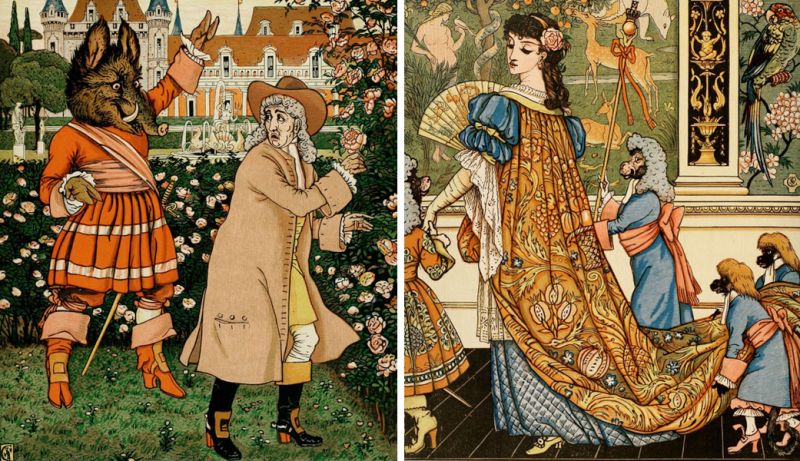 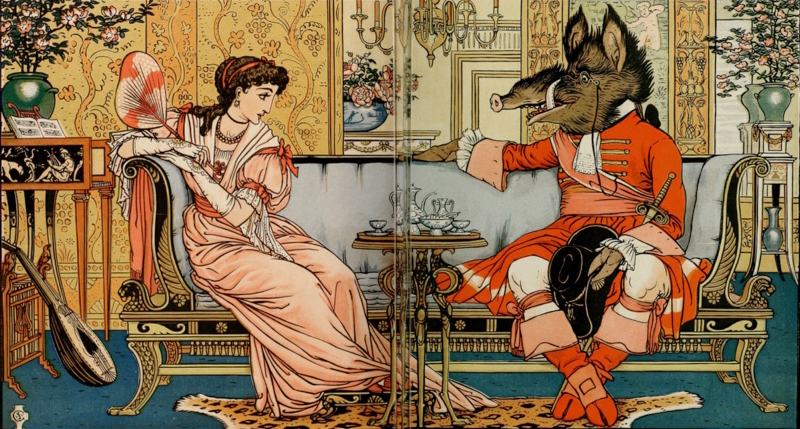 The art today is by the great English painter, illustrator, and designer Walter Crane (1845-1915). To learn more about his work, go here. 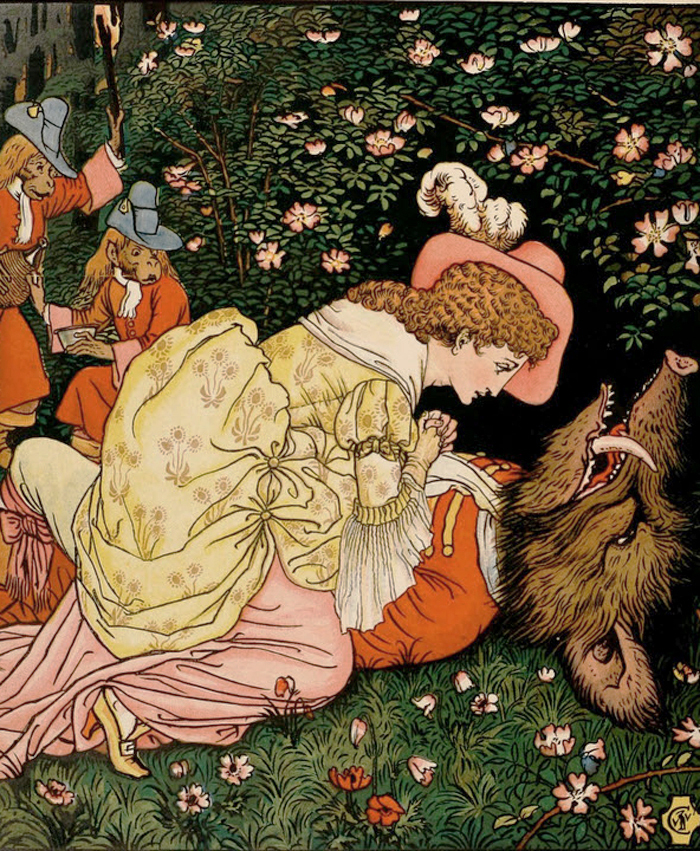 The passages quoted above are from: "To Love Justice" by bell hooks, published in Mirror, Mirror on the Wall: Women Writers Explore Their Favourite Fairy Tales, edited by Kate Bernheimer (Anchor Books, 1998 & 2002); "Fairy Tales" by G.K. Chesterton, published Fantasists on Fantasy, edited by Robert H. Boyer & Kenneth J. Zahorsky (Avon Books, 1984); What It Is by Lynda Barry (Drawn & Quarterly Editions, 2008); and "Why Our Future Depends on Libraries, Reading, and Daydreaming" by Neil Gaiman (The Guardian, Oct. 15, 2013). All rights reserved by the authors or their estates.

These are the quotes I needed to see today. Thank you so much!

I had forgotten how wonderful Lynda Barry is. Linking to the interview with her finding this:"One of the things you'll hear people say, when they tell me they wish they could draw, is, "I see it in my head, but I can't get it onto the page." And then I have to remind them that what they're seeing in their head is not a drawing. Drawing is something that has to come out of your body. And that horror they have is the same horror they might have if a bodily fluid was suddenly released, like suddenly they got a bloody nose or started drooling. It's that same shame about this thing that's out of their control that seems to be coming from them."
This cracked me up, and cracked me open to allow what's in my body out! Wonderful for a day when the planet of communication (Mercury) appears to be going backwards. With that backward movement I'm rewinding:)

Oh yes, I have eaten it,
seen the colors
the world cannot sustain,
felt the music my fingers
couold not control, was given
the gift of tongues
that sometimes works,
other times drools.
But when the magic
does its work, flowing
like lava through my veins,
sometimes I can put onto the page
what that apple core,
that spotted banana,
that date shaken off
the fairy tree
makes me see, hear, feel.
And then I write,
not in the tongue of angels,
but in my own voice
clear of its human phlegm
for a moment.
And that moment is enough.