Fairy tales and youngest sons
The road between dreams and reality

Hansel and the trail of stones 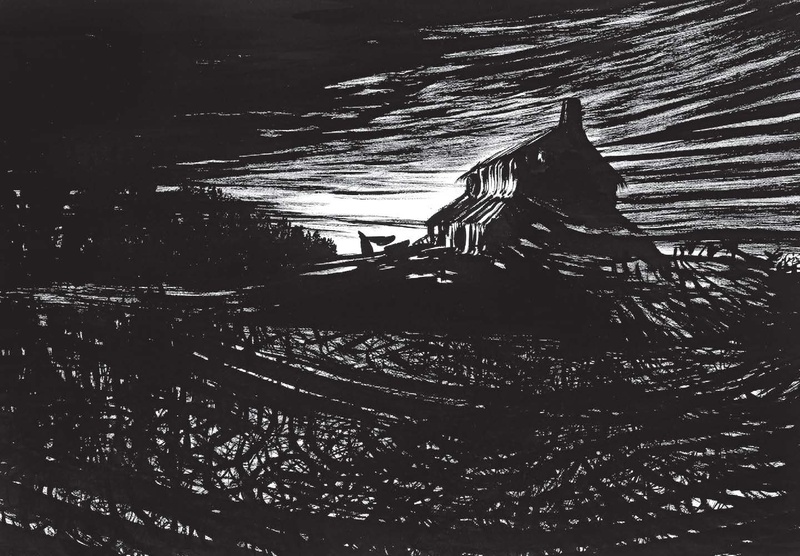 From "Hansel," a remarkable essay by poet Richard Siken, which begins like this:

"Why make a map? Why do anything at all? Not how, because hows are easy, series or sequence, one foot after another, but existentially why bother, what does it solve? Well, if you don't need to, don't. Wouldn't that be great? Just don't make anything. The world is full of things already, the world is vast and wide and full of grace, and you will always be given the benefit of the doubt. Except that isn't true now, is it? Fact is, the world is full of things trying to kill you. We do not walk through a passive landscape. Sometimes you need a map to find the food, the hiding places.

"I was a regular-style kid with a regular-style life. Things got bad, sure, but that was later. Grandma had stories about the war -- running, hiding, privation -- but that was later. I would discover that my father could speak German but refused to, was ashamed to -- We're Americans now -- but that was later. This is still the beginning, this is my bedtime, early on. The window is over my bed and there are three trees outside the window, in the yard, the dark woods, well-framed and moving slowly in the breeze. Imagine that the world is made out of love. Now imagine that it isn't. Here is a story where everything goes wrong, here is a story where everyone has their back against the wall, here is a story where everyone is in pain and acting selfishly because if they don't, they'll die. Here is a story, not of good and evil, but of need against need against need, where everyone is at cross-purposes and everyone is to blame. How are you supposed to fall asleep to this? 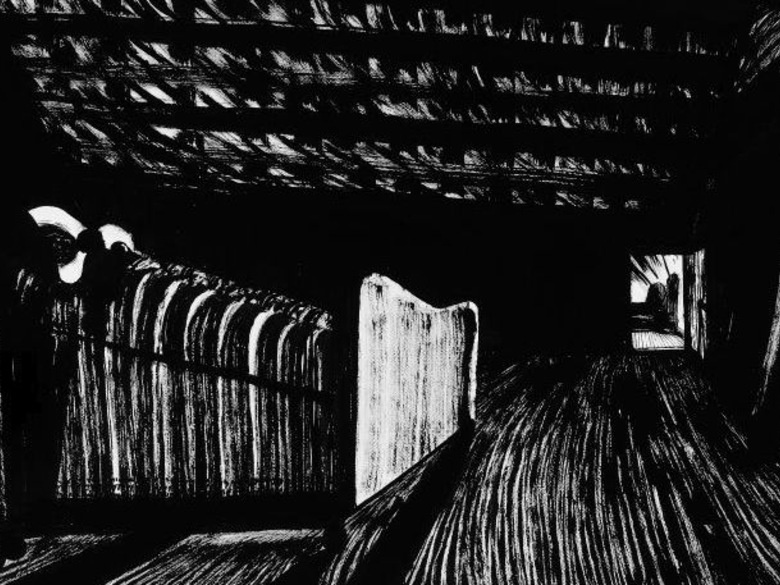 "Hard by a great forest lived a poor woodcutter who had come upon such hard times that he could no longer provide even daily bread for his wife and two children. 'What is to become of us?' says the man. 'Early tomorrow we will take the children into the thickest part of the forest and leave them there,' says the woman. The two children, awake from hunger, heard everything their parents were saying. Trust no one. You are expendable. You are a burden. Why would you tell this to your child, who is about to go to sleep? As soon as your eyes are shut, we will begin to plan your demise. If I were you, were smart, I'd stay awake, ever vigilant and terrified. I would look out the window at those three trees and think about those two children. If you know the story, you know that Gretel saves the day, that women have power (mother, daughter, witch) and men (father, son) just flounder about. My father is telling me this story and I am an only child. There is no Gretel. He has no power. I am being warned and there is no out. 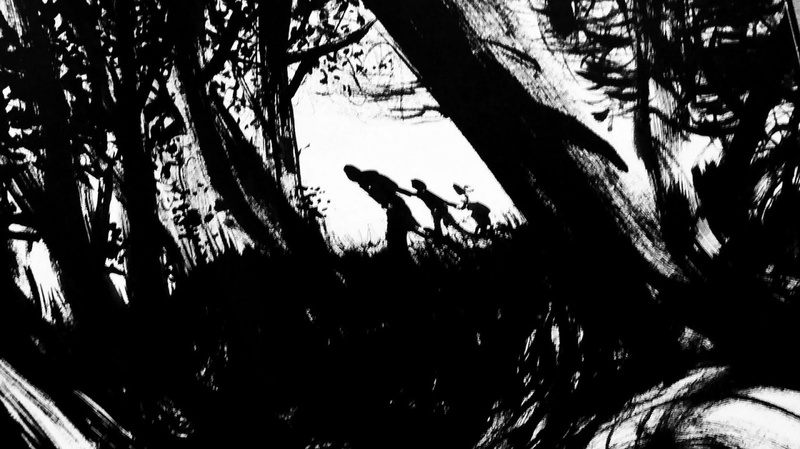 "Gretel begins to cry, but Hansel says, 'Be quiet, don't worry. I know what to do.' And with that he got up, pulled on his jacket, opened the lower door, and crept outside....The moon shines brightly and the white pebbles outside the house glisten like silver coins. Hansel bends over and fills his jacket pockets with them, as many as will fit. Then at daybreak the woman comes and wakes up the children. 'Get up, you lazybones. We're going into the woods to fetch wood.' She gives each one a piece of bread, saying, 'Here is something for midday. Don't eat it any sooner, for you'll not get any more.' Gretel hides hers under her apron so she can carry his. Hansel drops the pebbles from his pockets onto the path. 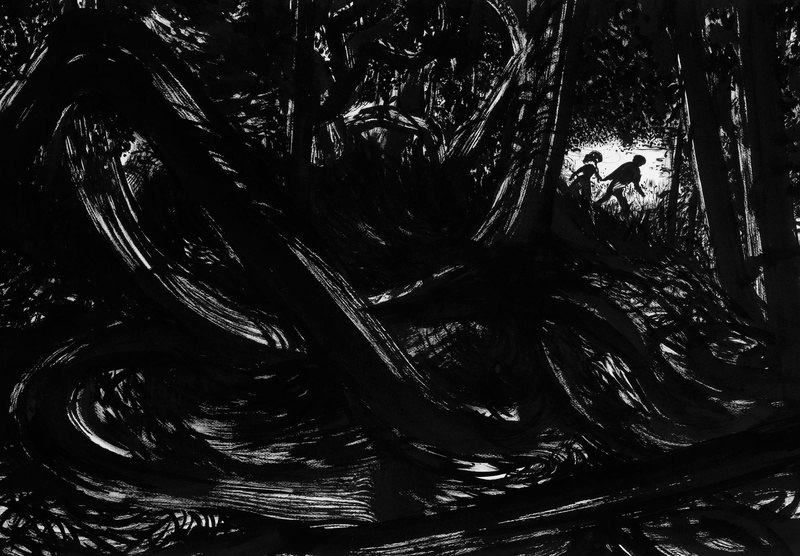 "They arrive, middle of the woods, make a fire, rest. Because they can hear the blows of an ax, they think that the father is nearby. It is not an ax, it is a branch that he has tied to a dead tree and that the wind was beating back and forth. After they had sat there a long time, their eyes grow weary and they fall asleep. This is the first iteration. They wake, it's dark, they cry, the moon rises, and the pebbles shine, showing them the way. This is my favorite part. It starts and ends here. The pebbles shine, the plan worked, Hansel Triumphant. Lesson number one: Be sneaky and have a plan. But the stupid boy goes back, makes the rest of the story postscript and aftermath. He shouldn't have gone back. And this is the second lesson I took from the story: When someone is trying to ditch you, kill you, never go back. 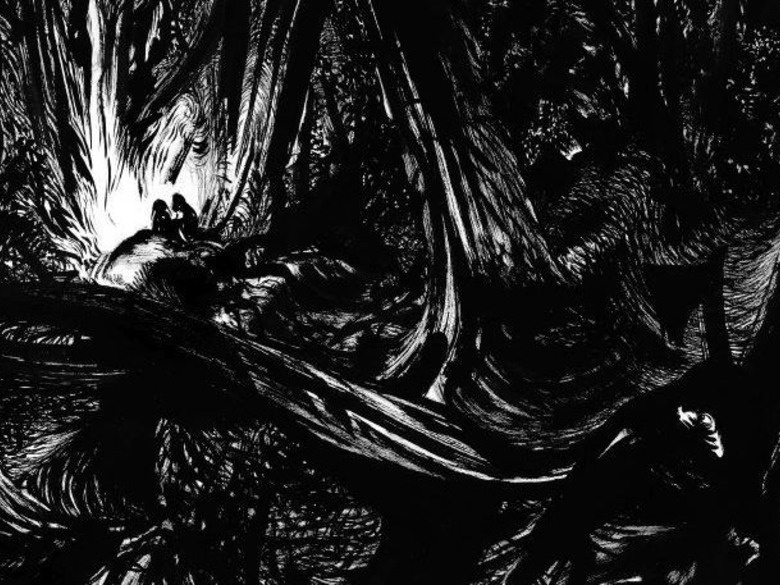 "My father is reading me this story and sometimes its just a story and other times it is his story, his history, he is sharing a sadness with me, an unfairness done to him that he cannot express, or it is the story of Exodus, or of World War II. My father creeps me out because he is telling me too many stories all at once and I do not believe he is innocent, or pure of heart, and I want pebbles. I want a lower door. They walked through the entire night, and as morning was breaking, they arrived at the father's house. Stupid, stupid kids." 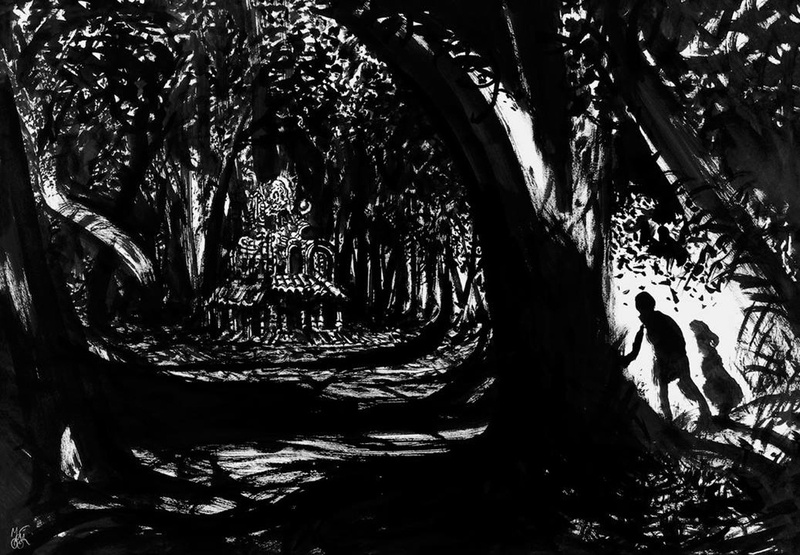 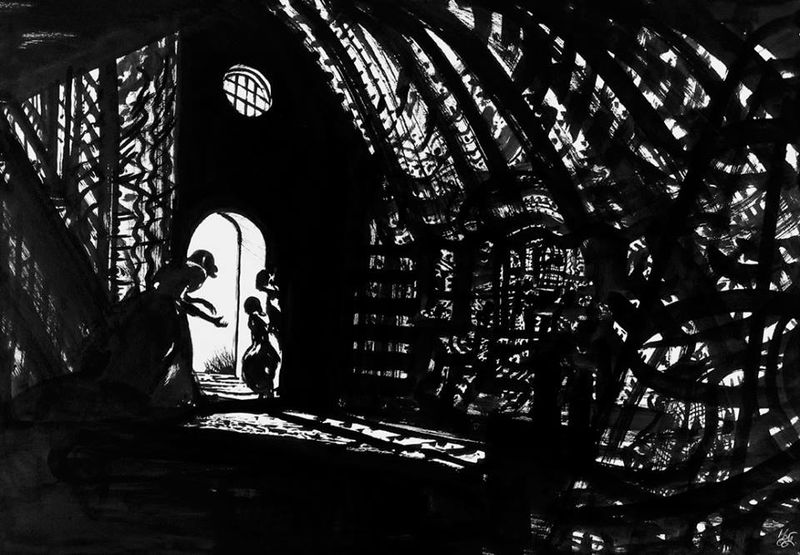 A little later in his essay, Silken writes:

"There are many definitions for poetry that are useful. I like 'Poetry is language that does more than one thing' and 'Poetry is the residue of a life lived.' I use words like pebbles, like residue. You are are in terrible danger. Grab your pebbles and go. Make a trail away from doom and don't look back. It works better than I thought it would. I also believe that anything can happen in words. The teller decides. I took it to heart. A spell, an incantation, a cake recipe. There is a bomb inside you. I can say that. It might be true. The Dalai Lama says we are born in bliss and Jesus says we are born in sin. I say, even if you do not believe in God, you must believe we are born into narrative, one foot in front of the other, things happening after other things. And since you are always moving forward -- pushed, pulled, or just strolling along -- you might as well take note of how and where you're going. Many writers can point to an event in their lives where they gained permission to write. The story of Hansel (and Gretel) gave me a mandate to write, to describe the terrain, for myself as well as for anyone who might want to, need to, follow." 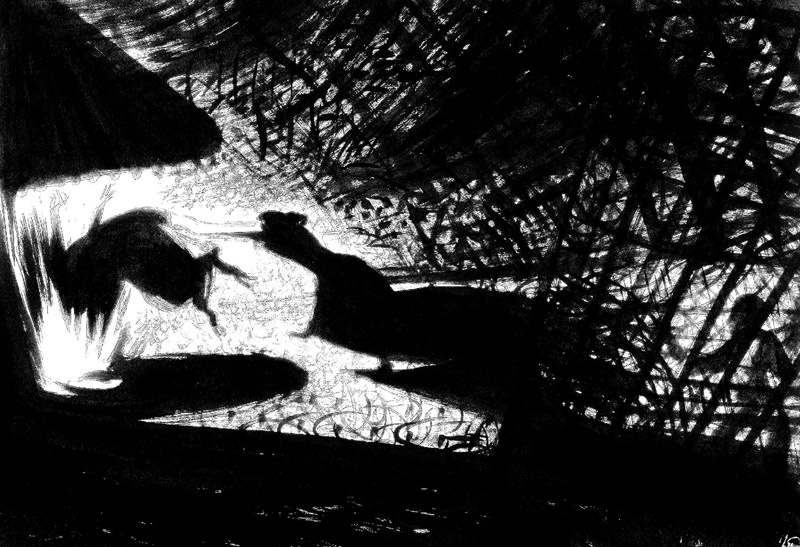 You'll find the Siken's essay in Brothers & Beasts: An Anthology of Men on Fairy Tales, edited by Kate Bernheimer, and I recommend reading it in full. 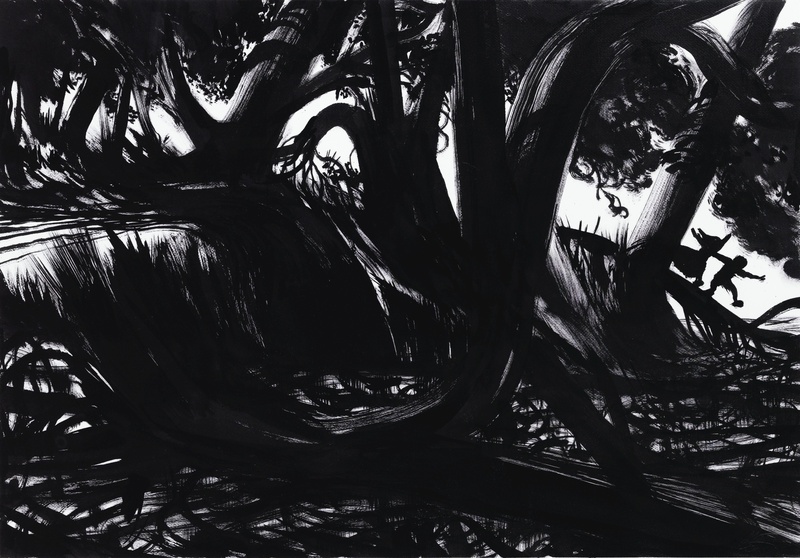 The striking Hansel & Gretel pictures today are by Italian graphic artist Lorenzo Mattotti, created for an illustrated edition of the story originally published in France. (A later English edition, with text by Neil Gaiman, appeared from TOON Graphics in 2014.) Mattotti studied architecture when he was young but ended up in the comics field instead -- making his name with such works as Fires and Labyrinthes from the 1980s onward, and winning an Eisner Award for his Dr Jekyll & Mr Hyde in 2003. He also illustrates children's books (Pinnochio, Eugenio, The Pavillion on the Links, etc.), and is internationally renown as a magazine and fashion illustrator. Born and raised in Lombardy, Mattotti now lives with his wife and family in Paris. 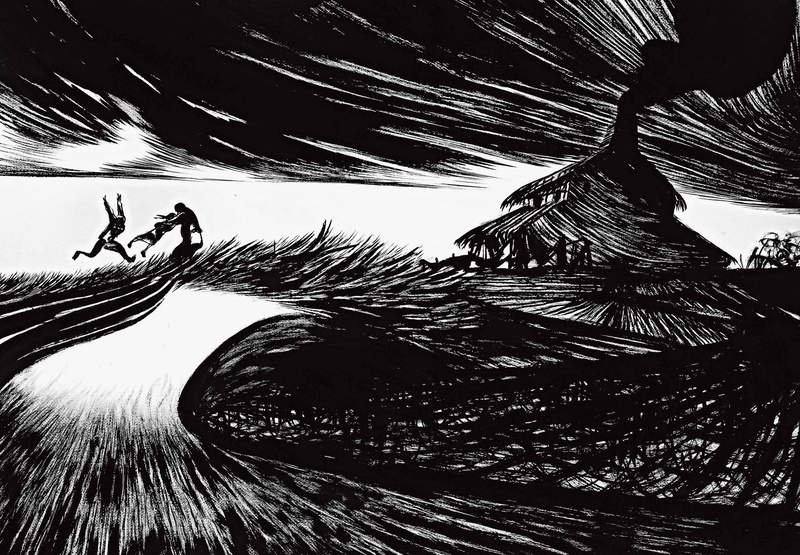 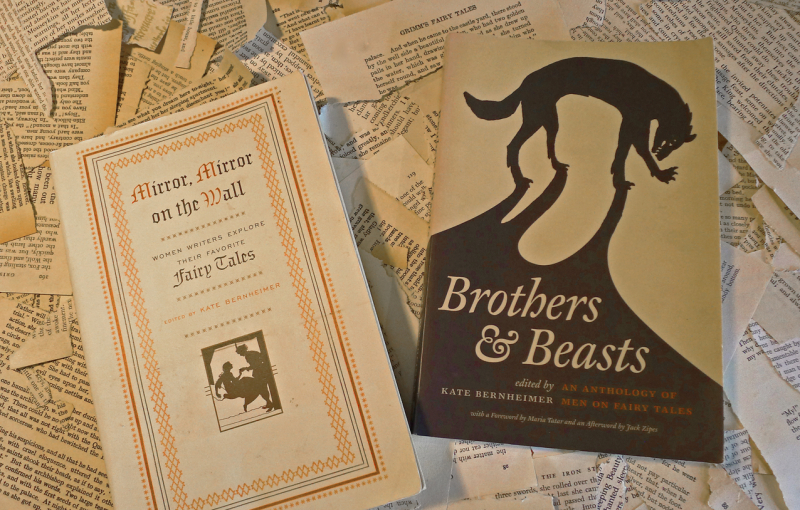 Words: The passage above by Richard Siken is from Brothers & Beasts, edited by Kate Bernheimer (Wayne State University Press, 2007). The poem in the picture captions is from The First Four Books of Poems by Louise Glück (Ecco, 1999). All rights reserved by the authors.

Pictures: The drawings above are from Hansel & Gretel, a graphic novel by Neil Gaiman & Lorenzo Mattotti (TOON Graphics, 2014) -- with thanks to Charles Vess for introducing me to it. All rights reserved by the artist.

What wonderful words! And such pictures. Thankyou Terri, I'm getting this book.

That boy, that girl, the threat,
the road into the woods,
the bread, the peas the birds eat,
the white stones.
All of it nonsense, of course.
No mother is bad, weeping
into the interstices of their lives.
no father beats them,
that little switch is for the horse.
No witch sits waiting
for lunch to walk into her cottage
on its own two legs.
Why tell such a story,
a map of calamity,
a jigsaw of lies.
Everyojne lives happily
ever after, except
those who do not.
I have seen theri numbers
on their arms.
The slashes on their legs.
T&he mounds of dead
in every nation
in every time.
That boy, that girl,
you, me, only a story
for the lucky ones.
A history for the rest.