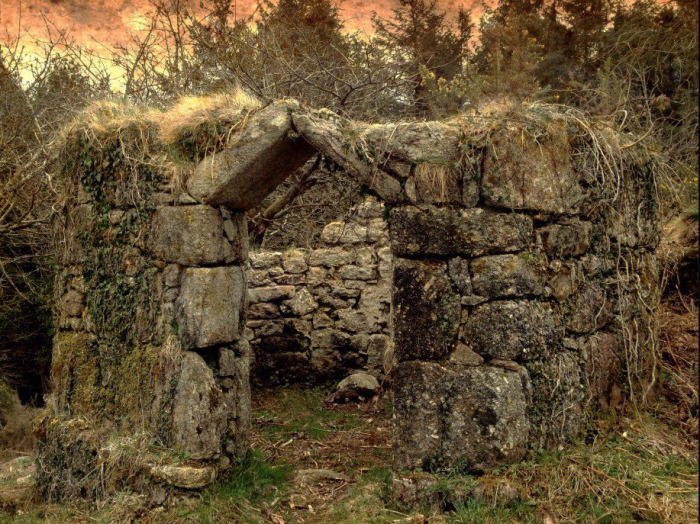 As rain drums on the studio's tin roof and a cold autumn wind strips leaves from the trees, here are songs of shelters and ruins...of tumbled stone walls half-buried in ivy...of the death of the year that gives birth to the new...of the losses that make way for new beginnings.

Above: "These Ruins," a new single by Bernadette Morris, from Co. Tyrone, Ireland. She has one solo album, All the Ways You Wander, 2013, with a second due out next year.

Below: "Green Unstopping" by The Rheingans Sisters (Anna & Rowan Rheingans), from the Peak District of Derbyshire. The song appeared on their lovely third album, Bright Field, 2018.

Above: "House on a Hill" by singer/songwriter Olivia Chaney, from Oxfordshire. The song, which was written and filmed in her family cottage on the North York Moors, appeared on her gorgeous album Shelter, 2018. (For the title song from the album, go here. For a live version of "House on the Hill," plus Chaney's "Roman Holiday," go here.)

Below: "The Old Churchyard" by Offa Rex (Olivia Chaney with The Decemberists). The song is from their collaborative album The Queen of Hearts, 2017.

Above: "Young Water Eyes" by Words of a Fiddle's Daughter (Adam Summerhayes and Murray Grainger of The Cinderhouse Rebellion, with poet Jessie Summerhayes), from North-East England. It appears on their new album of folk-tone-poems, rúnian (Anglo-Saxon for ’whisper’).

Below: "The Same Land" by Salt House (Ewan MacPherson, Lauren MacColl, and Jenny Sturgeon), based in Scotland. It's a soul-stirring song from their stunning new album Huam (a Scottish word for the call of an owl).

The Dartmoor photographs above are by our good friend Stu Jenks, an American photographer based in Arizona. (They were taken on a visit to Dartmoor a few years ago.)

For a previous post on the folklore of hearth & home, and magical houses in fantasy literature, go here. For a post on "home, land, and the view out the window," go here. And for a post on the mythos of moving, and "hefting" to a new home, go here.

Stones recounting lives,
the facts not the fictions
we live with,
those unadorned truths
that hide the real.
I want these words
on my grave:
"She wrote many good books,
one great one."
An invitation to conversation,
an argument seldom won,
but the kind of discourse
I would love best.

More than one great one, I daresay, Jane. ❤️

Stones recounting lives,
the facts not the fictions
we live with,
those unadorned truths
that hide the real.

And then you expand this wonderful piece with a personal perspective on how you would like to be remembered. I love that; and think you have definitely written more THAN ONE GREAT BOOK!

Thank you for sharing this,
My Best to you and yours,
Wendy

I love, love these songs and the idea of Autumn's presence emphasizing the ruins of old houses, churches and shelters as well a those places that stand as a testament to history and time. Such sites haunt us with their histories and as well as the spirit of place. Recently, I read an article on how the historic home of Washington Irving in upper state New York would be closed and not welcoming tourists ( because of Covid ) with its usual Fall celebration of the author, his homestead and personal life. It also mentioned how some parts of the house needed repair and yet the ghost of his characters, his sorrow as well as joy permeated throughout the grounds and rooms of the house.

One thing that always fascinated me about this writer was his undying love for a woman he knew briefly and lost. He was engaged to a 17 yr. old lady named Matilda Hoffman. She died of typhoid at the young age of 17 verging on 18. He wrote to a personal friend he would never marry again because he dreamt of her "incessantly". So overwhelmed by grief, he could never speak of her publicly or among family and friends. Instead, he enshrined her memory in a small ornamental box with letters. lock of hair and miniature portrait. I often wondered if her ghost both haunted the house and his dreams because she wanted to be recognized,, reborn through some of his characters and stories.

The road between dreams and reality is one that must be negotiated....
Jack Zipes

He dreamt of her incessantly, a young woman
wandering through his garden. Her face cameo'd
on the cool, showered dusk. A pallid impression
of something. Something like the thistles and lilies
resigned to bloom as stalks of pain, of pathos

when called by time or inclination. Was it hers or his
that willed them to flower near the gate? Reverie
is never clear They were simply there -- nodding
( along with her) for him to enter and follow.

Always the same place. The house with its peaked roof
and open shutters. A candle burning inside. A jug
of water on the bureau, a bed with just her shadow
flung over the mattress, long and angular as the spires

he had seen in Spain. Maiden towers of the church
imprinting canal or street with their dark outline, a sketch
of what they conveyed. The details absent but open
to whatever the wind delivered. A litany of leaves,
petals, saint-lipped whispers...

And in this dream, she kept pleading to return-- not rising
from the bones but through the breadth of his stories.
His heart had fallen in love with Europe; and he
was about to enshrine its memory (with words ) while keeping hers in a box. A small portrait with a lock of hair.

And each time the dream ended,
he awoke thirsty, the scent of candle smoke mingling
with a humid sun. His quill on the table. His head
aching with rain.