Thoughts on the morning after
Nurturing hope 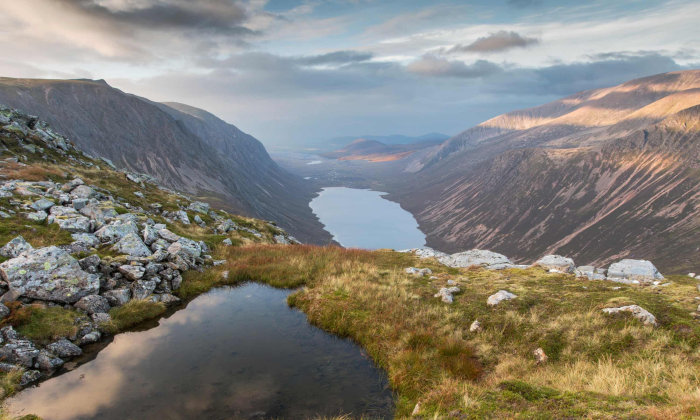 I've made no secret here of how much I love the music of Salt House, a Scottish folk trio whose last two album (Undersong and Huam) are often heard leaking through my studio door. Now two members of the band have released solo albums: The Living Mountain by Jenny Sturgeon and Landskein by Lauren MacColl. Both contain music rooted in the natural world, and both are exquisite.

Above: "Air & Light" by Jenny Sturgeon, from The Living Mountain. The album contains a cycle of songs inspired by Nan Shepherd's book of the same name: a pioneering work of nature writing set in the Cairngorms of north-east Scotland. Sturgeon explores "her own connection to this Highland area, as well as delving into Nan's philosophy of being in the mountains, and people's connection to the wild. The twelve songs take inspiration from the chapter titles of Nan's book; the lyrics tell of exploration, love, loss, and wonder at the natural world, from small scale mosses and moths to the wider landscape and ecosystem."

Below: "Water," another beautiful song from the same album.

Next, two songs by fiddle and viola player Lauren MacColl, from her haunting new album Landskein -- named for a word that Robert Macfarlane found in use in the Outer Hebrides, meaning: "The weaving and braiding of horizon lines often seen most clearly on hazy days in hill country."

Above: "Air Mullach Beinn Fhuathais (On Top of Ben Wyvis)."  The song is from The Airs and melodies peculiar to the Highlands of Scotland and the Isles, collected by Captain Simon Fraser in 1816. The film and artwork above is by Mairearad Green.

Below: "Pentland Hills," inspired by the Pentland range south-west of Edinburgh.

The third member of Salt House is my friend Ewan MacPherson, who has released two solo albums to date -- as well as albums with Shooglenifty, Fribo, RoughCoastAudio and other bands, and work for the Modern Fairies project.

Above: "All the Kings (Scotland's Winter)," an adaptation of a poem by Orcadian poet Edwin Muir. "Scotland's Winter could be perceived on different levels," Ewan says. "The one which stands out for me is a nostalgic lament for better days past in relation to his homeland." The song first appeared on his album Norther in 2008, but this lovely new version was recorded in August.

Below, all three musicians together performing "Union of Crows." It's from the most recent Salt House album, Huam, released earlier this year. 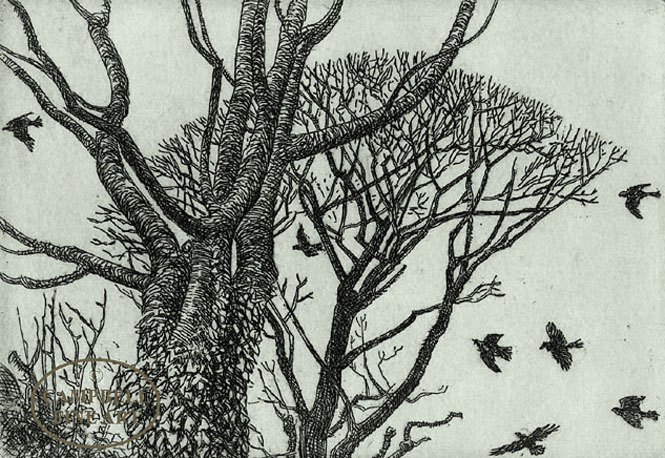 The etching above is "The Rookery" by Eleanor Hughes (1882-1959). Born in New Zealand, she trained in England and is associated with the Newlyn group of artists in Cornwall.

Ah, Terri, such solace and grounding comfort; joy undergirded with the deep familiarity with sorrow.

Each one of today's selections struck a deep chord with me. Maybe it's the Autumn air. It'll have me suggestions ng deeper into my pockets to expand my music collection 😉💛

Terri, do you remember playing me Salt House when we first started working together? I went home and cried. Such beautiful music and memories of folk gigs with Thomas.
The way music holds memories for us is quite magical.
Thank you.

I do remember, Lunar. There are several Salt House songs that make me tear up no matter how many times I listen to them; there's just so much poetry, emotion and soul in their music. (Ewan's work for the Modern Fairies project was the same.) I long for the day that live music gigs can safely start up again. May it be soon.

Sidney and Susan: I'm so glad today's music selections are striking a chord.

Music wizard Andy Bell (who also worked on the Modern Fairies project) is the producer on both Salt House albums recommended above, as well as Jenny Sturgeon's The Living Mountain...and Sturgeon's beautiful album with Inge Thompson (also from Modern Fairies): Northern Flyway, all about birds. Have a look at Andy's "Hudson Records" site, which is full of wonderful music: http://hudsonrecords.co.uk/ . (The company is named after Hudson, Andy's dog, who is a remarkable little being.)

Such perfect selections for today. They re-rooted me to the seasons, the land, which is much needed in the swirling chaos here. Thank you.

Many thanks for introducing me to Salt House. Together and individually, they are soothing and inspiring. We all need some soothing right now.

Oh My! I just adore these songs and have always had a fondness for Scottish tunes and myths. When I lived in Tennessee, ( of all places) there was a radio station called "The Thistle and shamrock hour" devoted to playing old Irish and Scottish ballads, tunes etc. I fell in love with their sound, theme and sense of haunting or longing. These songs today only reinforce my love for these melodies. And I adore the word/concept of "landskein", both the meaning and the phonetic quality of it. I was thinking about how the "skeins of song" unfold when you hear a song of nature, lost or renewed love etc. And the strains of the landscape, the human heart/mind, the past and present underscored by memory and anticipation create the total effect. It is exploring the interwoven feelings. colors and light that make-up the horizon and history's shadow that looms through the haze or mist. Thus, I came up with this poem where the woman is waiting for her lover to return from war; and unlike a lot of ballads of the same genre, this one has a more positive view, how she has prepared for his eventual return.

The sun is down, have you laid out
fresh linens and the box
with his letters and seashells found
along the sand or tide pool rocks?

The sun is down, but have you felt
the wind drift on soft, humid feet
while foam lathers his shadow
along the shore where past & present meet?

The sun is down, have you undone
the buttons of your dress
and for him, brushed into shine
each red-golden tress?

The sun is down, have you relit
the candles and poured some wine,
and with love, unlatched a window
to scent the room with rose and pine?

Thanks so much Terri for sharing these songs! They are just wonderful and hauntingly
beautiful!