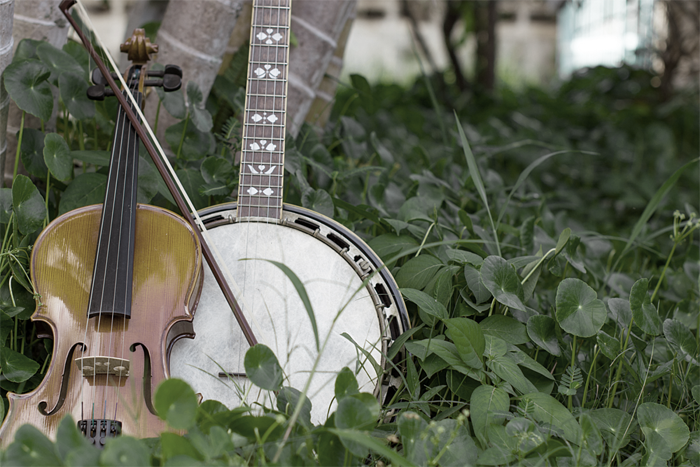 With so many eyes on America as the aftermath of the election unfolds, let's start the week with a collection of American folk ballads, old and new. The North American ballad tradition grew from the music of immigrant, enslaved, and indigenous peoples, blended into a distinct new form, which still influences bluegrass, folk, gospel, and country music to this day. Like most things in America, the history of the continent's balladry is complex, diverse, and many-faceted -- and all the richer for being a "melting pot" of songs and tunes.

Above: "When First Unto This Country" performed by singer/songwriter Aoife O'Donovan, with Crooked Still. The song appeared on their early album Crooked Still Live (2009), but this version was filmed at a bluegrass festival in 2017.

Below: "Black is the Color" performed by singer/songwriter, banjo player and music historian Rhiannon Giddens (of the Carolina Chocolate Drops).  It's from Giddens' solo album Tomorrow is My Turn (2015).

Above: "Come All You Coal Miners / Take Me to Harlan" performed by husband-and-wife banjo masters Béla Fleck & Abigail Washburn, with clog-dancing by Washburn and movement work from Pilobolus. The first piece, written by Sarah Ogan Gunning, concerns mining life in the Appalachian region of Kentucky; the second, by Fleck and Washburn, was inspired by the stories of those who left the mountains for urban life.

Below: "Émigré"  by singer/songwriter Alela Diane, from her album Cusp (2017)

Above: "Clyde Water," performed by Anais Mitchell & Jefferson Hamer. This song, from the Anglo-Scots tradition, is found in the American ballad songbook too, carried over the ocean by immigrants. It appears on the Mitchell & Hamer album Child Ballads (2013), featuring songs collected by the American ballad historian James Francis Child.

Below: "Thomas County Law" by Iron and Wine (singer/songwriter Sam Beam). The song appeared on his album Beast Epic (2017).

To end with, a couple of Dylan songs influenced by American balladry:

Above: "Boots of Spanish Leather," performed by Mandolin Orange (Andrew Marlin and Emily Frantz) for Audiotree Live in 2014.

Below: "Wagon Wheel" performed by Darius Rucker (from Hootie and the Blowfish). It's from Rucker's solo album True Believers (2013).

Terri, I always enjoy hearing from you. I've been following you since The Wood Wife. I'm a musician, and I've enjoyed the vids chosen here. Much of my own work meanders around the mythic. If you're looking for similar music, but from an English angle. Try this one. Cheers. Chris. https://youtu.be/SKCxuy42a9Q

Oh, how I loved this post. I sing ballads, and my heart jumps for joy when I hear others singing them too.