The landscape of story 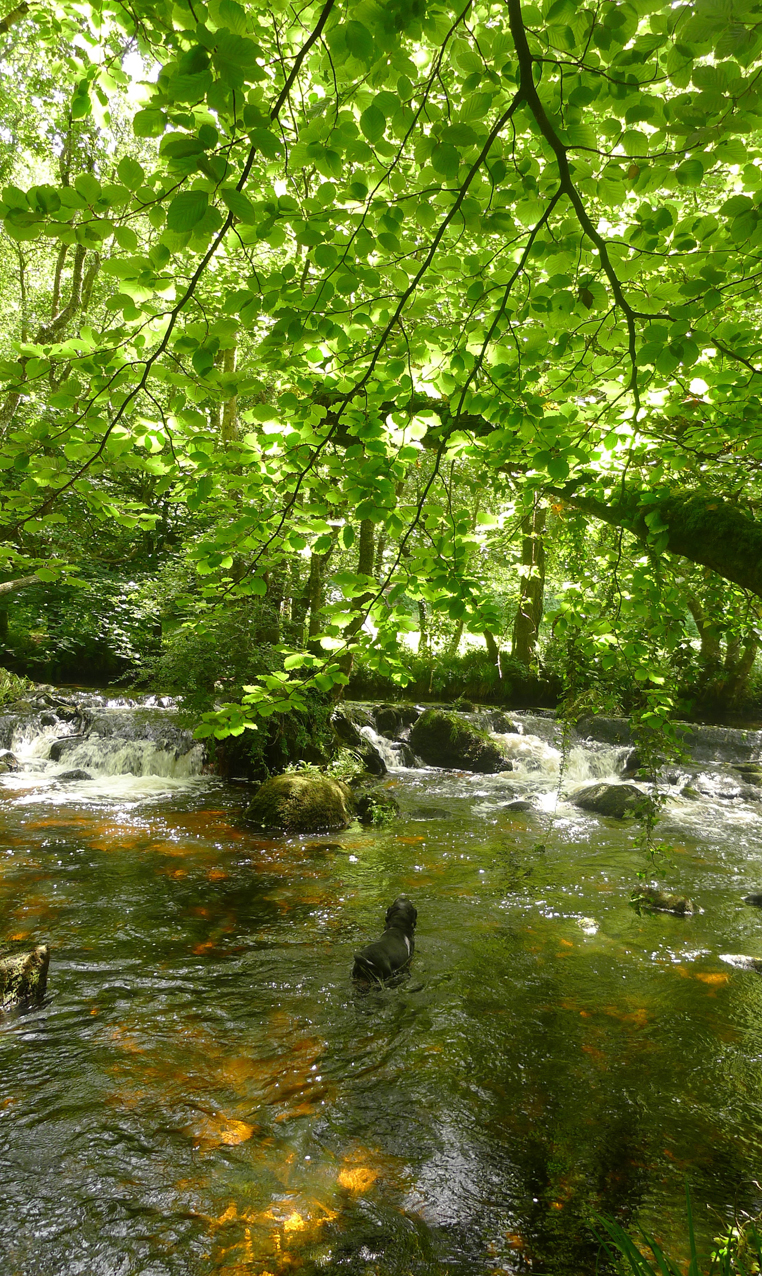 In response to the on-going Pilgrimage for Nature (and getting regular updates from Howard on how the Long Walk is progressing), I've been thinking about climate change and the role we fantasists, folklorists, and storytellers might play in the urgent labor of healing our planet -- not only directly in the form of political activism, but also through our work as mythic artists. I was reminded of these words from "The Dreaming of Place" by storyteller Hugh Lupton:

"The ground holds the memory of all that has happened to it. The landscapes we inhabit are rich in story. The lives of our ancestors have contributed to the shape and form of the land we know today -- whether we are treading the cracked cement of a deserted runaway, the boundary defined by a quickthorn hedge, the outline of a Roman road or the grassy hump of a Bronze Age tumulus. The creatures we share the landscape with have made their marks, too: their tracks, nesting places, slides and waterholes. And beyond the human and animal interactions are the huge, slow geological shapings that have given the land its form. Every bump, fold and crease, every hill and hollow is part of a narrative that is both human and prehuman. And as long as men and women have moved over the land these narratives have been spoken and sung. 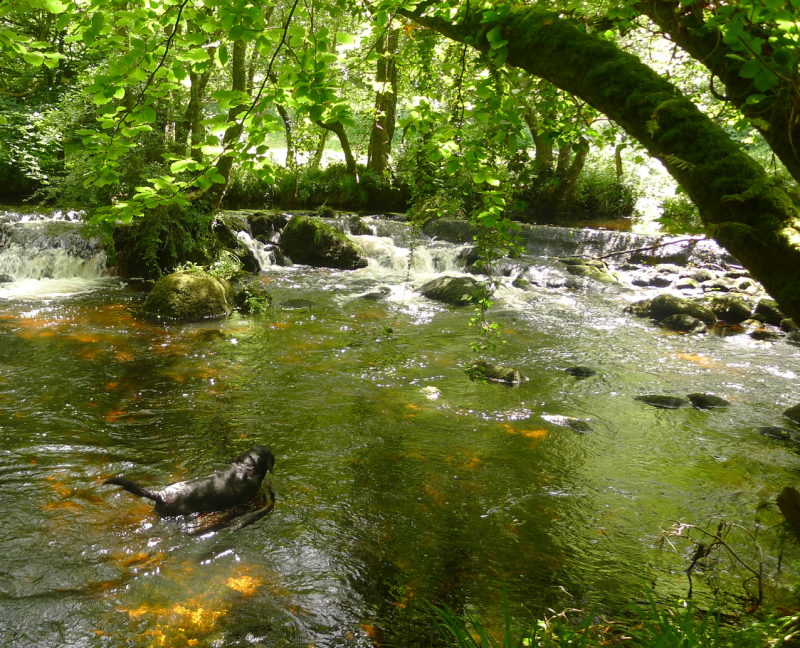 "This sense of story being held immanent in landscape is most clearly defined in the belief systems of the Aboriginal peoples of Australia. In Native Australian belief everything that is not 'here and now' is described as having gone 'into the dreaming.' The Aborigines believe that the tangled skein of remembered experience, history, legend and myth that constitutes the past -- that is invisible to the objective eye or the camera -- has not gone away. It is, rather, implicit in the place where it happened, a potentiality. It is a living memory that is held between a place and its people. It is always waiting to be woken by a voice. 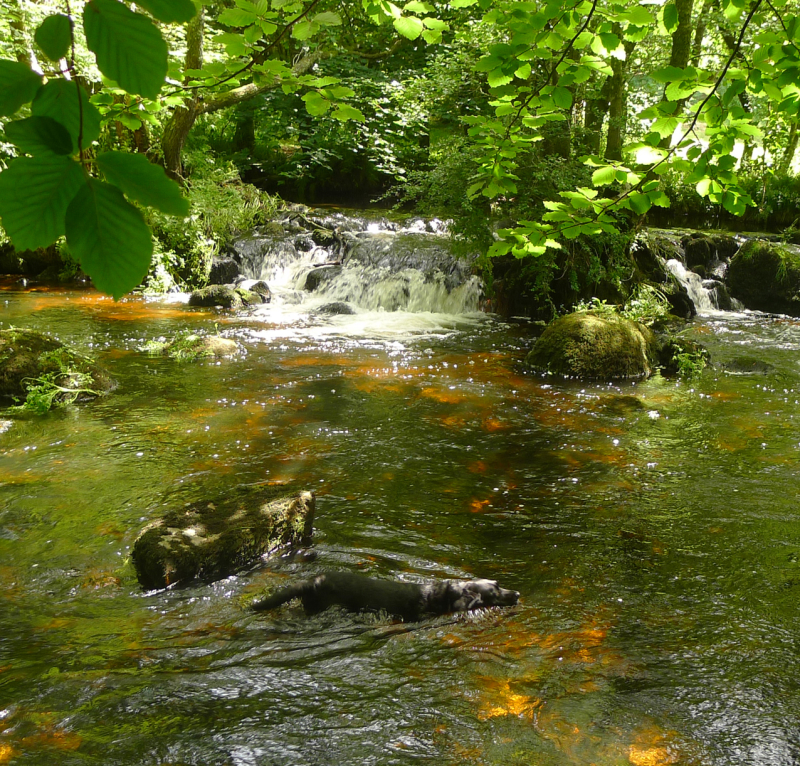 "I remember the Irish storyteller Eamon Kelly once telling me that in the parish of County Clare where he grew up, every field had a name, and every field name was associated with a story. To walk from one end of the parish to the other was to walk through a landscape of story. It occurred to me that the same was probably once true for any parish in Britain.

"But today we are forgetting our stories. We have been forgetting them for a long time. Few of us live in the same landscape as our grandparents. The deep knowledge that comes from long familiarity has become a rarity. Places are glimpsed through the windows of cars and trains. Maybe, occasionally, we stride through them.

"What does it mean for a culture to have lost touch with its dreaming? What can we do about it? 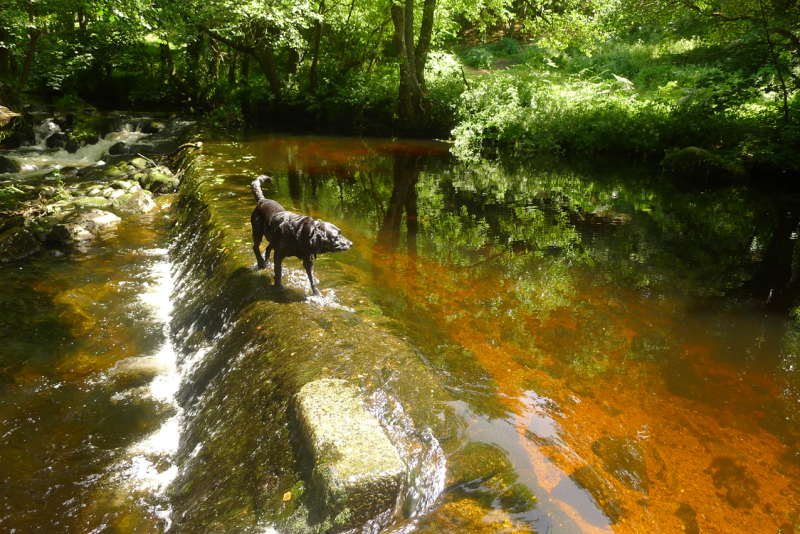 "It seems to me that as writers, artists, environmentalists, parents, teachers and talkers, one of our practices should be to enter the Dreaming, that invisible, parallel world, and salvage our local stories. We need to re-charge the landscape with its forgotten narratives. Only then will it regain the sacred status it once possessed. This might involve research into local history, conversations with elders in the community, exploration of regional folktales, ballads and myths...

"And then an intuitive jump into Imagination."

I agree with Lupton on this. And who better placed than those of us in the folklore and fantasy fields (experienced in using the tools of myth and archetype in our art) to contribute to the important work of re-charging, re-enchanting, and re-storying the land? 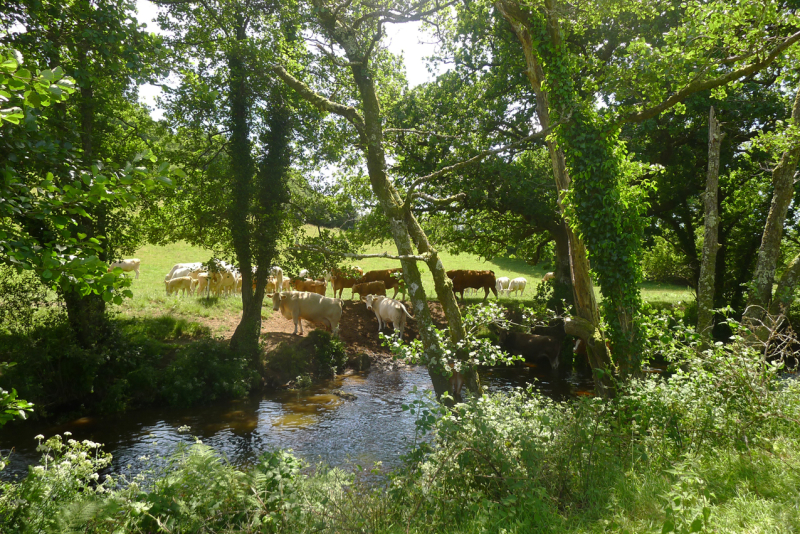 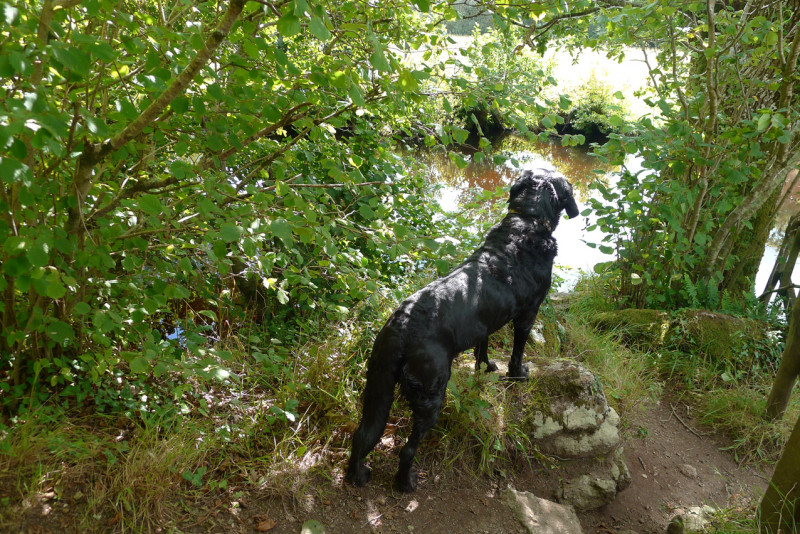 The passage above by British storyteller, folklorist, and novelist Hugh Lupton is from EarthLines magazine (Issue 2, August 2012). The poem in the picture captions is from The Magicians of Scotland by Ron Butlin (Polygon, 2015). All rights reserved by the authors.

Related posts: Wild stories, Where the wild things are, The logos of the land, The unwritten landscape, Telling the holy, The writer's god is Mercury.

in Fantasy literature, From the archives, Rivers & streams | Permalink | Comments (2) 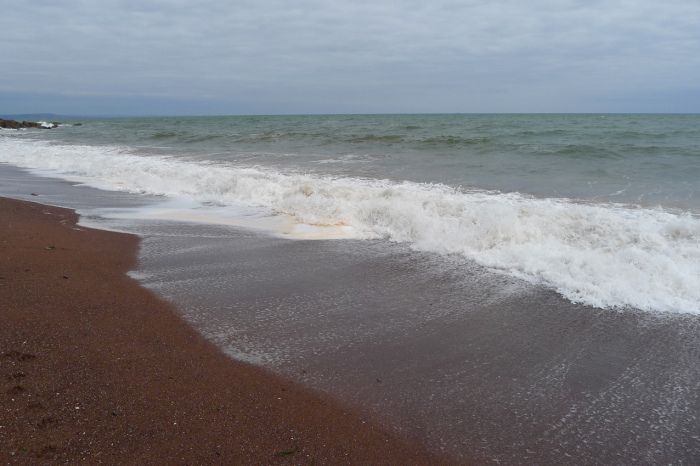 I'm back in the studio today, not entirely recovered from a Long Covid relapse but doing a little better (touch wood). I'm taking it day by day at the moment -- which may continue to affect the Myth & Moor posting schedule, so please bear with me.

With Howard off on the Pilgrimage for Nature, I've been thinking a lot about climate change; so let's start the week with some songs about, and for, the world around us....

Above: "The Sadness Of The Sea" by singer/songwriter Martha Tilston, based in Cornwall. The song, she says, "was inspired by how I feel when I see the plastic that washes up on the shores near my home. However, it is also a song of thanks to the beauty of our natural world. " It appears on The Tape, the soundtrack album for Tilston's new film of the same name.

Below: "Half Wild" by singer/songwriter Kitty Macfarlane, from Somerset. She writes: "This song is a reminder that we are made of the same matter and mettle as much of the natural world, governed by the same laws and rhythms. We share the sea's chaotic balance of strength and fragility, and like the breaking waves, it's within our power to either leave a mark or to leave no trace." The song can be found on her album of the same name, released earlier this year.

Above: "Undersong" by Salt House (Jenny Sturgen, Lauren MacColl, and Ewan McPherson), based in Scotland. The song appeared on their gorgeous album Undersong in 2018. Their new album, Huam, is just as good, and I listen to both of them constantly.

Below: "Air and Light," from Jenny Sturgeon's exquisite album The Living Mountain (2020) -- inspired by Nan Shepherd's book of the same name, a classic of Scottish nature writing.

Above: "This Forest," a haunting folk tale of a song by The Rheingans Sisters (Rowan and Anna Rheingans), based in Sheffield. It's from their excellent third album, Bright Field (2018), with animation by Harriet Holman Penney.

Below, because we all need healing, both humankind and the more-than-human world: "Dina Dukhio" by Balladeste (American violinist Preetha Narayanan and British cellist Tara Franks), from their new album Beyond Breath. This one, they say, "is inspired by a raga-based Indian devotional melody from the Sai Lineage, which in essence translates as ‘overcoming sorrow.’ We wanted to explore the idea of ritual and letting go in this film following the experience of the last year and a half."

And here's one more, dedicated to Howard and his companions on the Long Walk to the Climate Change Conference in Glasgow:

"Walking Song" by singer/songwriter Jon Boden, based in Sheffield. It's from his remarkable new album Last Mile Home (2021). You'll find the lyrics here. 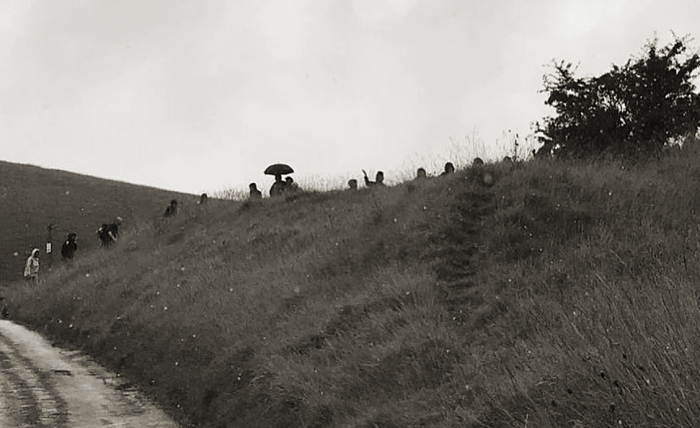 Photographs: The south Devon coast in early September; and the Nature Pilgrims in Oxfordshire last week (the latter picture by Jolie Booth).

The video above features the beautiful letter from artist/author Jackie Morris for the pilgrims walking all the way from London to the Climate Change Conference in Glasgow, my husband Howard being one of them. Please take some quiet time to listen to Jackie's heart-felt, hope-filled, inspiring words. "It's the hardest thing, in these days, to hold on to hope," she says, "but it must be done."

Jolie Booth (co-creator of the pilgrimage) writes: "Jackie Morris kindly gifted us with seven hand-painted labyrinth stones, a hand-drawn illustrated book that she wrote to the pilgrims, which we read out at the opening ceremony in London on Saturday. The Letters to the Earth campaign will be running workshops along our pilgrimage route for different communities to write and deliver their messages for a better future to the leaders of the world as we walk. What gifts! What magic."

Visit the Pilgrimage For Nature Instagram or Facebook pages for further updates, photos, and the like.  For information on how to participate in the walk, even from far away, go here. And please note that there is a new fund-raiser going to keep the pilgrims on the road (to replace other funding that didn't come through). If you have some pennies to spare, please give them your support. 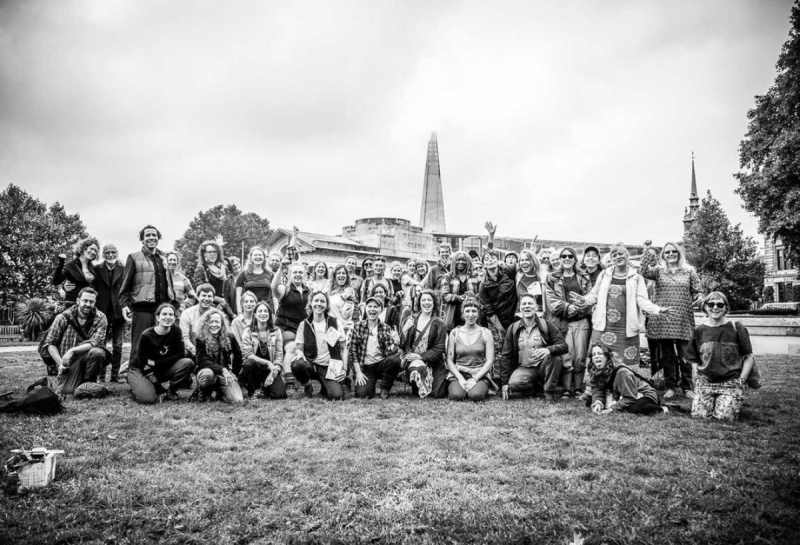 Above, a photograph of the pilgrims in London on Saturday. Jolie writes: "The bags all packed and ready to go…we finally meet at Tower Hill. We’re filled with excitement and nervousness as we take the step into the unknown. From today we walk north, filled with curiosity and love."

May the weather gods continue to smile on them, may all the pilgrims stay safe in these difficult times, and may the work they are doing on behalf of Mother Earth be fruitful. 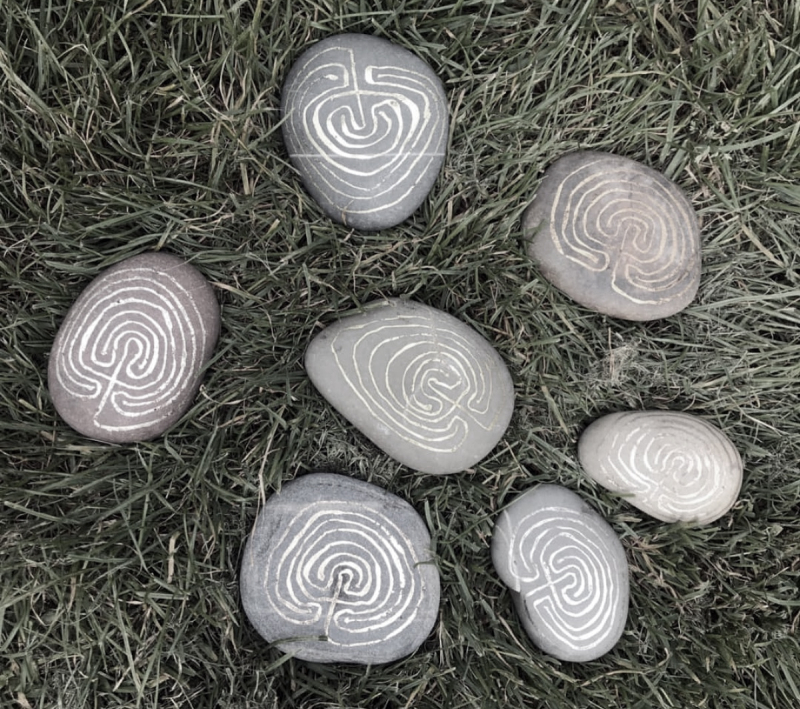 For those who worry about Covid safety (and I am one of them!), the pilgrims are in a Covid bubble, testing regularly, and there are protocols in place for meeting and working with others along the route. 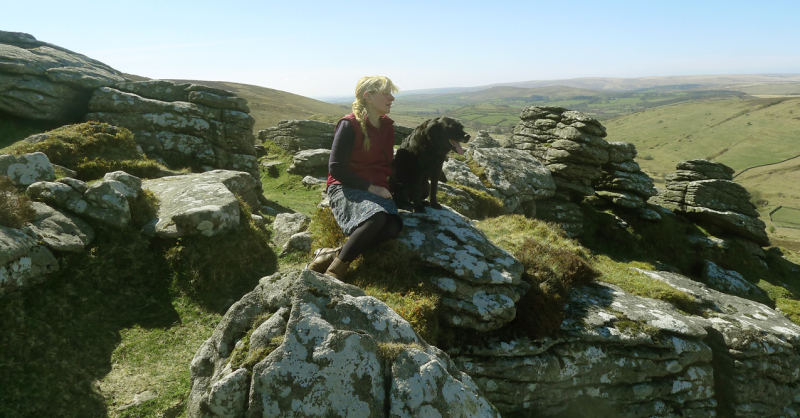 I'm having a bit of Long Covid flare-up. No surprise, really. It happens less regularly now than a year ago, but still flares up if I get over-tired...and this last week has been a doozy, between Tilly's emergency vet visits and getting Howard packed up and off on pilgrimage.

Now Howard's on the road, Tilly is doing better, and my body seems to be insisting that I take some time to take care of myself. I'll be back to Myth & Moor soon, with those final "water book" recommendations and more.

Leon Tolstoy once wrote: ''A quiet secluded life in the country, with the possibility of being useful to people to whom it is easy to do good, and who are not accustomed to have it done to them; then work which one hopes may be of some use; then rest, nature, books, music, love for one's neighbor - such is my idea of happiness.'' 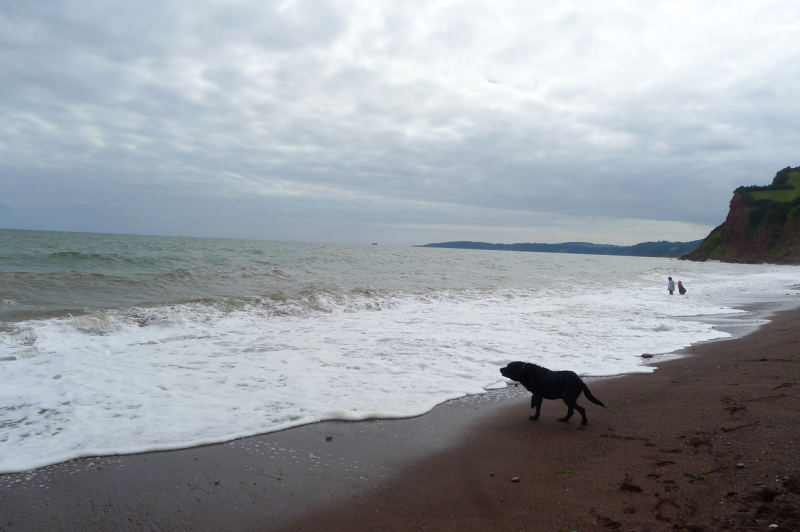 My apologies that there is no Myth & Moor post today. Tilly had an emergency vet visit this morning (don't worry, she's okay now), and the rest of the day was taken up by last-minute packing in order to get Howard off to London tomorrow.

In London, Howard joins his fellow pilgrims for The Pilgrimage for Nature, and they begin their eight-week walk to Glasgow, where they'll be presenting a performance (created during the walk, weaving in the voices and concerns of those met along the way) to the delegates at the UN Climate Change Conference in early November. He's just about ready to go now, but boy-oh-boy it's been a busy day, full of unforeseen challenges. 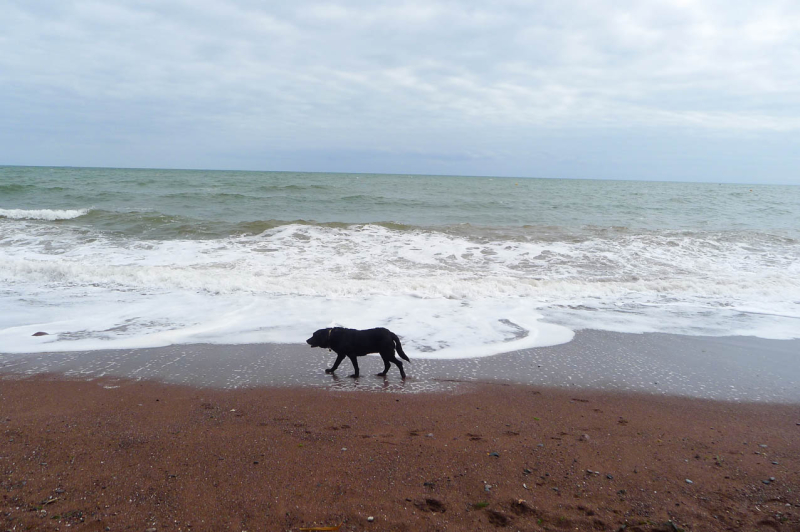 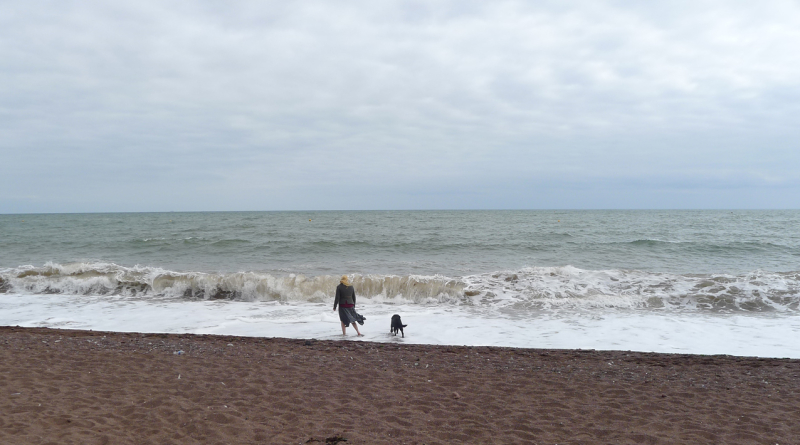 Photographs above: Tilly and me on the beach near Teignmouth on Wednesday. She loved it, and so did I. Oh, to be in the sea again! We've been too long away.