Where dreams are born 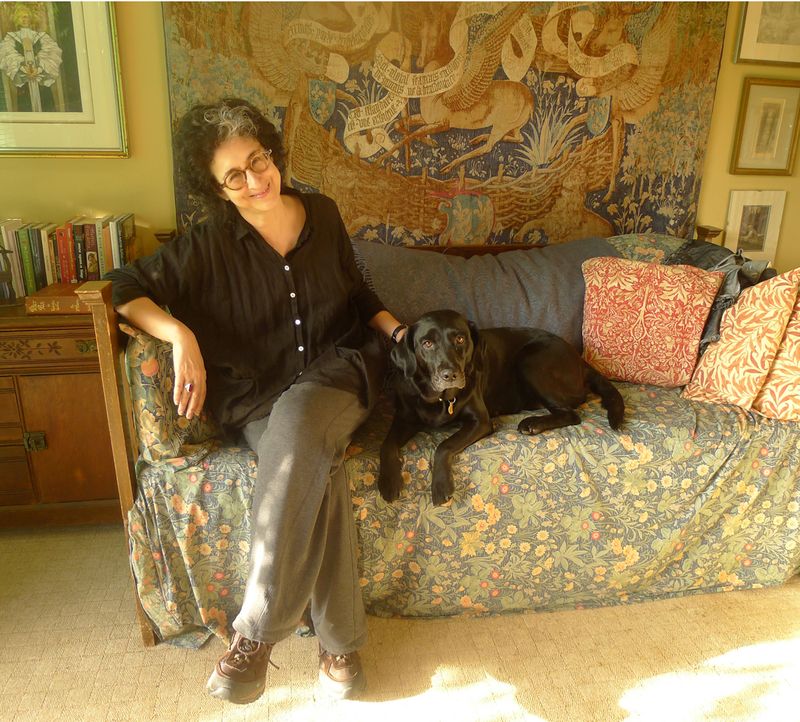 For today's post on the subject of edge-lands and borders, I'd like to send you to another web page to listen to a podcast of Ellen Kushner exploring "Borders: The Debatable Lands"  in an episode of her award-winning radio program, Sound & Spirit. Here's the episode description:

"Sound & Spirit invites you to walk the Borderlands: a shared space between two worlds, a place where they meet and combine to make something new and vital. Explore the lively music and blend of traditions of the Tex/Mex border [and the English/Scottish border], the misty border between myth and reality where dreams are born, and the borders in our lives when we pass from one stage of life to the next."

Ellen's brilliant series has ended, but past episodes are available online. Go here to have a listen. I also recommend two related episodes of Sound & Spirit, Exile and Homesickness, about those who have crossed over the border and cannot go home again. 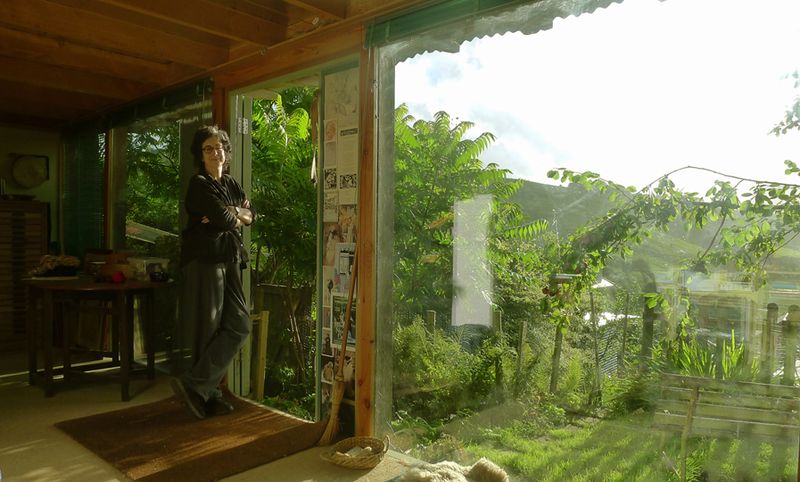 Photographs above: Ellen and Tilly in my studio, on one of her many visits to Chagford. 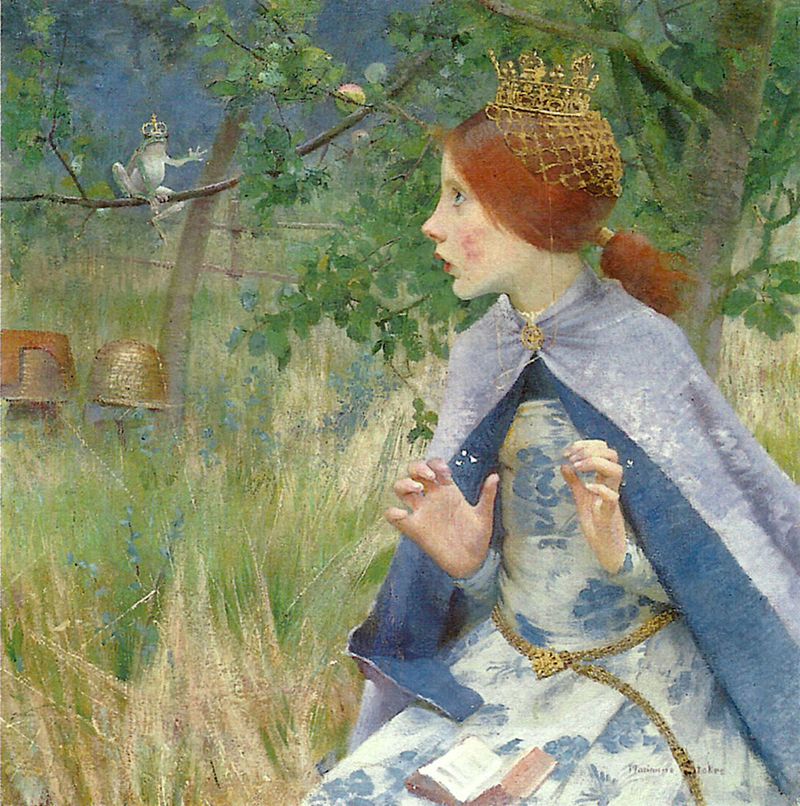 I loved The Diane Rehm Show on public radio when I lived in the States, so it was a thrill to learn that the show would be devoting a segment to "the history and modern relevance of fairy tales" this week. Fairy tales are usually covered in the media in a shallow (and sometimes deeply ignorant) way, but I trusted Ms. Rehm to do much better than this -- particularly as the guests she'd lined up were Maria Tatar, Marina Warner, and Ellen Kushner. Perfect! And, indeed, it was a splendid discussion. If you missed it, go here to have a listen.

(For those of you unfamiliar with the show, Diane Rehm's voice sounds strained because of spasmodic dysphonia, a neurological voice disorder that almost ended her career. Instead, she returned to the radio and used her show as a platform to raise public awareness of the condition. A remarkable woman.) 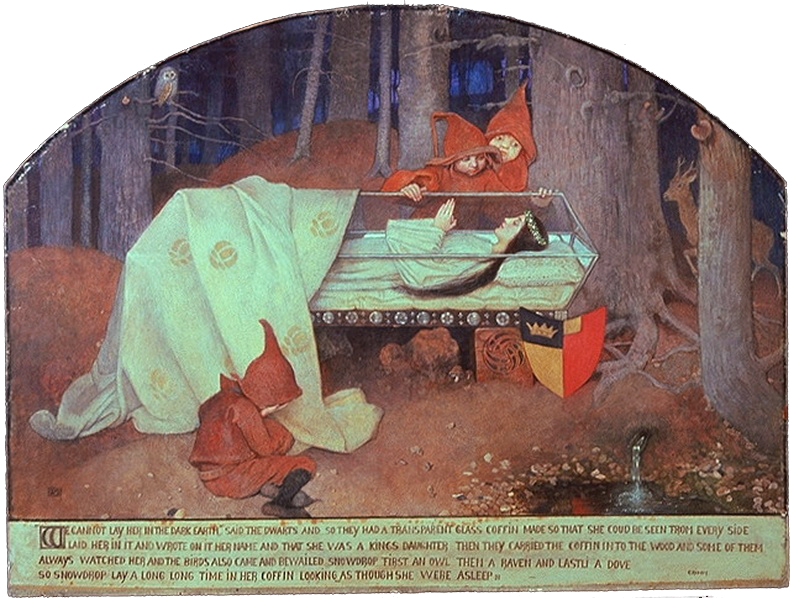 And on the subject of fairy tales:

I hope you haven't missed Marina Warner's excellent new book, Once Upon a Time: A Short History of the Fairy Tale, which just came out in October from Oxford University Press. "The more one knows fairy tales," she notes, "the less fantastical they appear; they can be vehicles of the grimmest realism, expressing hope against all the odds with gritted teeth."

Edited to add: I also recommend Warner's article "How Fairy Tales Grew Up," published in The Guardian this week.

The editors of Mirror, Mirrored (Gwarlingo Press) are planning a limited edition volume of Grimms Fairy Tales illustrated by contemporary artists from a wide range of disciplines, with an Introduction by Karen Joy Fowler. They are running a crowd-funding campaign for it now, with some lovely art as donation rewards.

And last: Go here to watch a video of Philip Pullman discussing the enduring power of stories in a clip from the BBC's Newsnight programme. 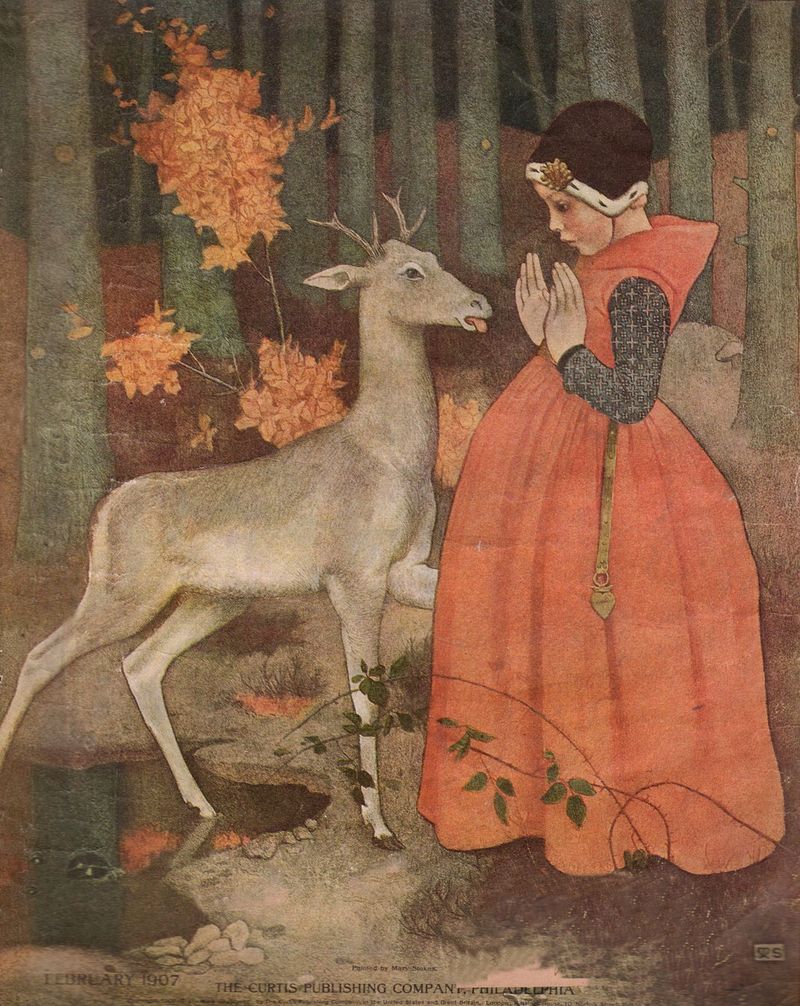 The illustrations in this post are by Marianne Stokes (1855-1927) -- a painter who, though little known today, was considered one of the leading women artists of Victorian England.

Born in Austria, Marianne studied in Munich and Paris, lived in arts colonies in Brittany and Denmark, then settled in St. Ives, Cornwall with her British husband, landscape painter Adrian Stokes. In Cornwall, she was part of the lively Newlyn group of plein air artists (along with her close friend Elizabeth Stanhope Forbes), until falling under the spell of Pre-Raphaelitism from the 1890s onward. The Stokes then lived and worked in London, with frequent painting trips abroad -- spending half their year in rural Austria, Hungry, and the Tartra Mountain villages between Slovakia and Poland. If you'd like to know more, I recommend Utmost Fidelity: The Painting Lives of Marianne and Adrian Stokes by Magdalen Evans. 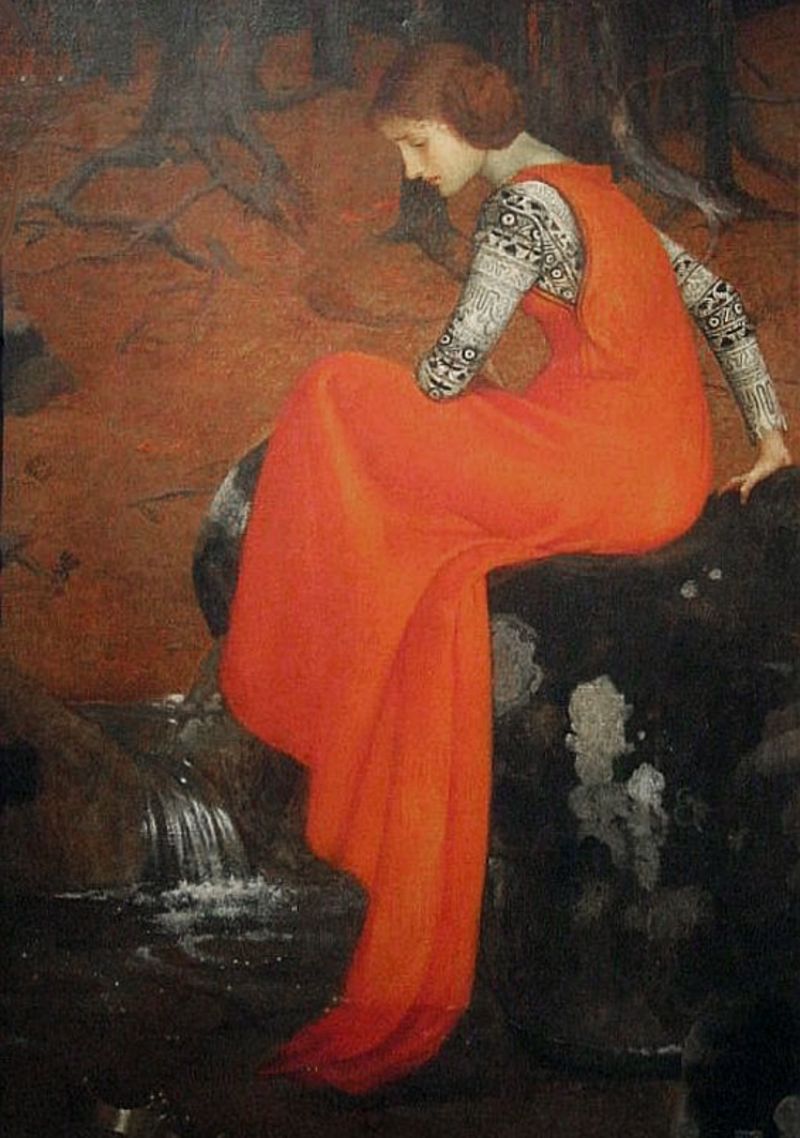 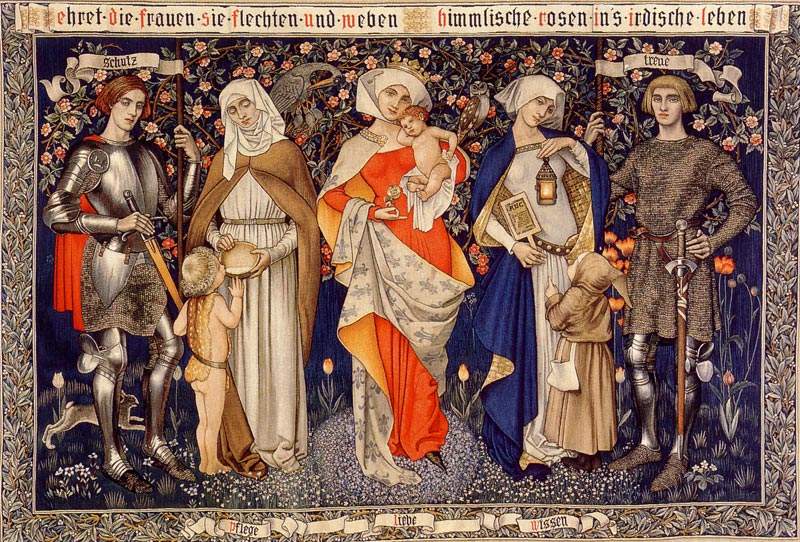 lllustrations above: "The Frog Prince," "Snow White,"  an untitled magazine cover illustration from 1907, and "Melisande." The tapestry design is "Women's Worth" (based on a Schiller poem), created for Morris & Co. in 1912. 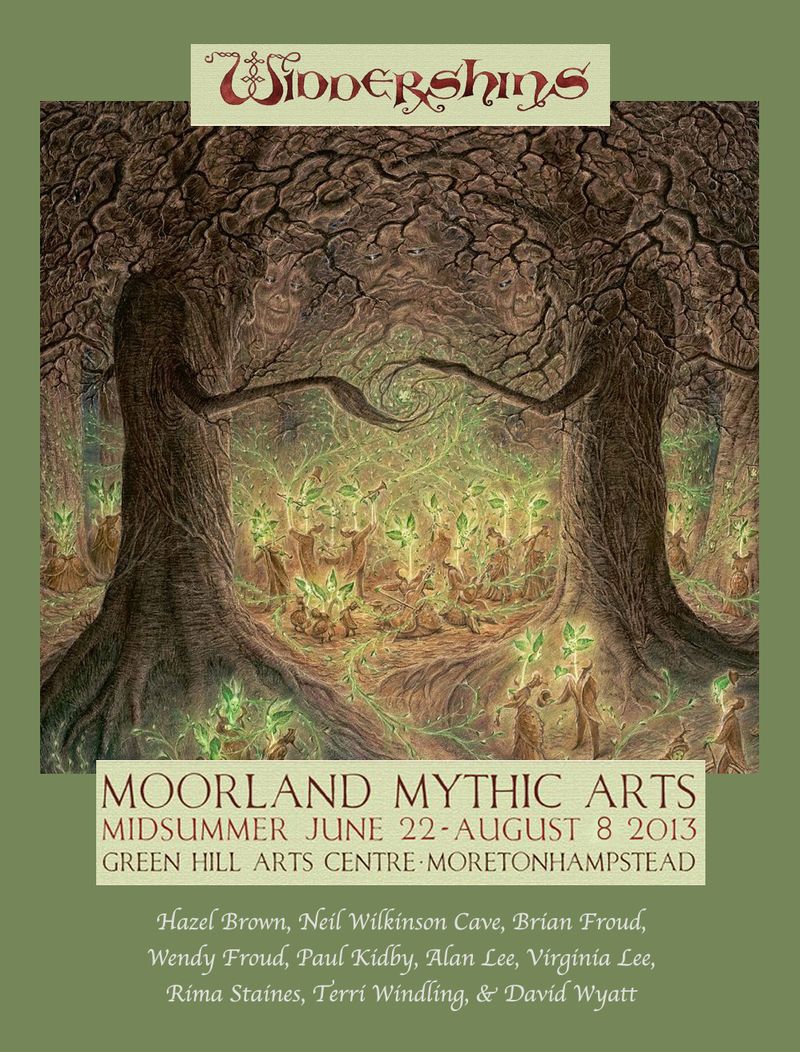 Just two weeks left, if you're planning to catch the Widdershins exhibition. The poster image here is a detail from an extraordinary new painting by Virginia Lee, which is, in my humble opinion, worth a trip to Moretonhampstead all by itself. (But you'll also find many other treasures there.) 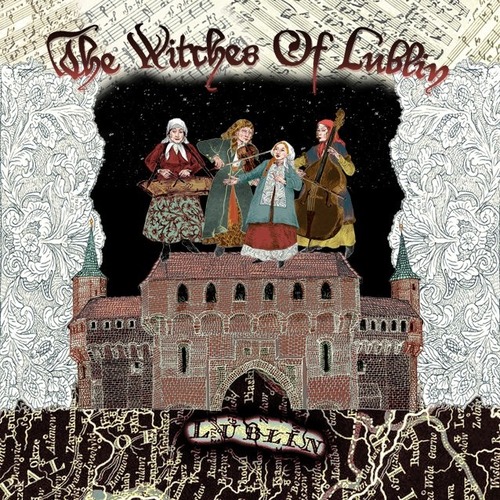 Looking for a last-minute Chanukah present? Or simply a fan of klezmer music, or of fabulous, folklore-inspired arts? Then I highly recommend Ellen Kushner's THE WITCHES OF LUBLIN, which you can download directly from Audible.com.  Ellen wrote it the script with klezmer greats Elizabeth Schwartz & Yale Strom, who also provide an extra hour of wonderful music. Here's what AudioFile Magazine says about it:

"In a story at once tragic, mystically uplifting, and historically accurate, Tovah Feldshuh plays a widowed Jewish woman in eighteenth-century Poland who, with her daughters and granddaughter, defies tradition by performing music for non-Jews at a nearby town to earn money for Passover provisions. The all-star cast includes Simon Jones as a tyrannical nobleman and Barbara Rosenblat as the self-righteous wife of a butcher.  Neil Gaiman portrays the nobleman’s son, who falls in love with the nightingale-voiced granddaughter (Elizabeth Boskey) and requests that the four women perform at his coming-of-age party. With its powerful performances—woven with Yale Strom’s music, touching script, and outstanding direction, THE WITCHES OF LUBLIN is a story that will leave listeners both haunted and inspired."

Above, the Irish folksinger Cara Dillon performs a traditional song, "Craigie Hill," accompanied by the Ulster Orchestra. Below, the great English songwriter Ralph McTell performs his now-classic song "From Clare to Here" (which some of you may know through the beautiful version recorded by Nanci Griffith).

Both songs pertain to the subject of Irish emigration: In the first, a young man says farewell to his native land as he sails off to America, full of hope for a better life ahead. The second song portrays the reality of that new life as many experienced it: hard, and full of longing for the land and people left behind.

While only a few us share the experience of making one's home in a foreign land, I would imagine that all of us can relate to the subject of homesickness, for surely we've all felt its bittersweet touch at one point of life or another. These days I am often caught out by waves of homesickness for the Arizona desert -- for although I'm happily rooted on Dartmoor now, and have adopted this land as the home of my soul, there's a part of me that will always belong to the Rincon Mountains that lie east of Tucson. Yet for me, the pain of homesickness is mitigated by the fact that my emigration was voluntary. What must it be like to be 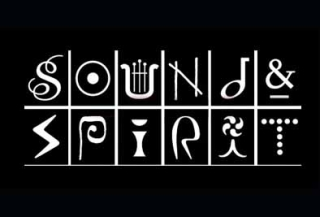 forced to leave a beloved home -- by war, politics, economics, or circumstance? The ache of that loss must be painful indeed, and I often wonder how people can bear it.

My good friend Ellen Kushner has explored the subjects of Homesickness and Exile on her absolutely brilliant radio series Sound & Spirit. (Follow the links to listen to them.) If you haven't encountered S&S before...well then I envy you, dear Readers, for you have many happy hours of listening ahead. Don't miss the show on The Kalevala, or on Friendship, or the one I was involved with: Surviving Survival, or, or, or...heck, they're all good.