I'm a little behind on the news, so y'all may know this already, but I was delighted to learn this morning that Realms of Fantasy magazine is not dead after all. Warren Lapine of Tir Na Nog Press has closed a deal to buy the magazine from Sovereign Media, which is very good news indeed. Shawna McCarthy will still be the editor, Doug Cohen will still be the assistant editor, and the stories previously contracted for will be published after all. They hope, apparently, to carry on with only one missed issue.

Thanks, everyone, for your comments on my last post. It's very nice to be back at my desk at last. Both Midori and I have been waylayed by time-consuming Big Life Events since we closed down the Endicott Studio's Journal of Mythic Arts last summer (our timing seems to have been remarkably prescient)...but we will be getting back to regular blogging and Endicott Studio projects just as soon as the dust settles around us.

The "Magic of Food" article mentioned on this Realms cover, by the way, was by Midori. Titled "In Praise of the Cook," it was one of my favorite Folkroots articles. (You'll find a copy of it online here.) The art on the cover is by my friend and neighbor Wendy Froud, from her remarkable book The Art of Wendy Froud.

Another one bites the dust.... 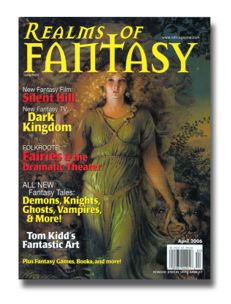 Damn. More bad publishing news. Hot on the heels of the announcement that The Year's Best Fantasy & Horror anthology series is folding, now Realms of Fantasy magazine is ending with the April issue. (Locus has the story here.) Shawna McCarthy, who has edited the magazine since it's first issue in 1994, has done a fine job of showcasing the field's best writers, developing new talent, and keeping the short story form alive. This is another real loss for the field . . . and for short fiction, and the writers thereof.

I worked for the magazine for 14 years, supervising (and often writing) the "Folkroots" column on folklore, fairy tales and myth. My friend and fellow-folklorist Ari Berk took over the editorship of "Folkroots" in 2008, and it's been a delight to read the columns that have been published on his watch. To Shawna, Ari, Laura Cleveland (RoF's terrific managing editor): Thank you for all your hard work, and your support of fantasy, myth, and mythic arts.

Damn. This is sad news indeed.