On the magic of cities 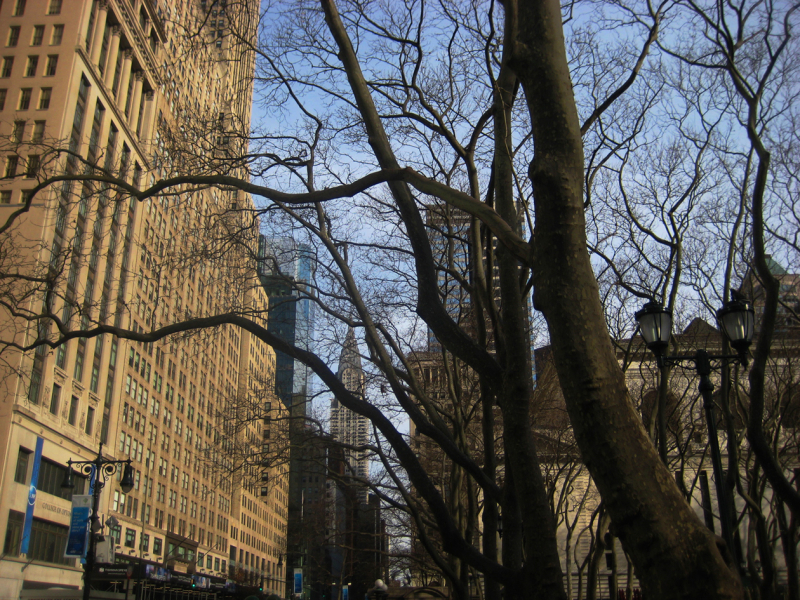 In response to our recent discussions "in praise of slowness," Raquel Somatra wrote:

"I lived on a mountain in North Carolina for six months with no car. The nearest grocery store was 1.5 miles away. Down the mountain, over several hills, through a dark tunnel, passed the old hotel that still has a sign that says 'now with color TV!'... People always think it must have been such a horrific time, to walk to the store once or twice a week and carry home groceries. But I loved it.....There is something about motion and pilgrimage that magically and deeply connects us to ourselves, to our insides, and to the earth. I think I got to know that landscape more in six months than locals who had lived their whole lives there. I knew where you could find pairs of bunnies in the spring, where the robins liked to feast along the ends of the roads, where wild roses grew, that tiny, wild pansies grew everywhere, fairy flowers hidden in the grasses. What else is there than connection to the land, ourselves, and each other? We must do this slowly -- I agree with Rebecca [Solnit]. Our minds move as slow as our feet, there can be no other way.

"P.S. I was thrilled to find that here in Brooklyn, I make a similar journey with groceries. There aren't mountains and pansies, but there are wondrous sights and people, a train, and much, much walking."

The post below comes out of thoughts prompted by Raquel's words, and I want to begin by acknowledging that debt. 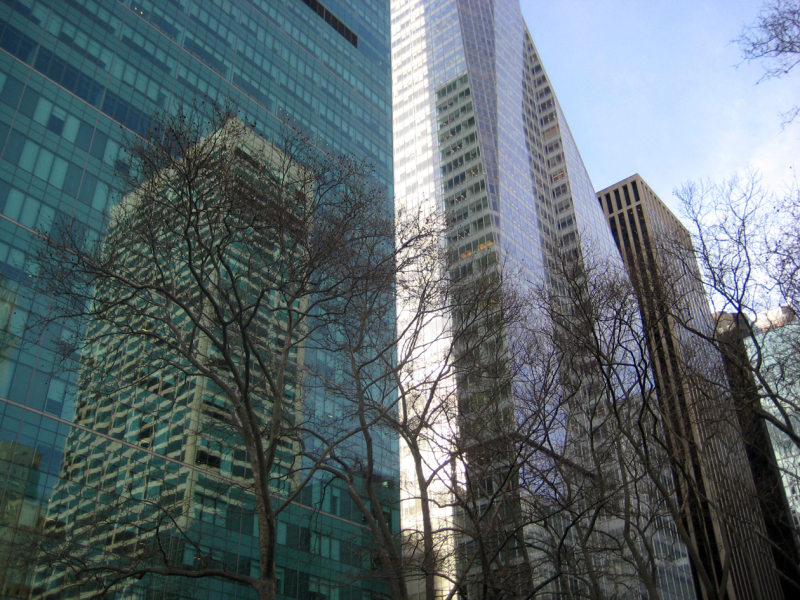 Despite the bucolic nature of this blog, written as it is from the English countryside, I think the words of the various writers quoted in these pages -- attesting to the importance of "land" and "place" -- are useful reminders to all of us, no matter where we live, that our aim should be to fully live wherever it is we find ourselves. As Mary Oliver tell us in beautiful poems that repeatedly enjoin us to pay attention, living a creative life is not just about the novels or paintings we produce (let alone manage to publish or sell), it's about living in a state of openness and attention -- beginning  with the ground on which we stand: its flora, folklore, mythology, history, its weather patterns and daily rhythms, and the lives of those with whom we share it, human and nonhuman alike.  This is as true, I believe, for city, town, and suburb dwellers as it is for me here in rural Devon.

"Urban Fantasy," which emerged as a sub-genre of fantasy fiction in the 1980s and '90s -- when the term referred to works by writers like Charles de Lint, Emma Bull, Megan Lindholm (a.k.a. Robin Hobb), Francesca Lia Block, and Neil Gaiman, not paranormal romance and detective stories --  had at its heart a metaphorical search for wonder and natural (rather than supernatural) magic in city settings. These writers were asserting that one needn't travel to imaginary lands, the medieval past, or even to the countryside to find a magical (dare I say "spiritual"?) connection to place: it was available to all...yes, even at the heart of the beast: the big, noisy, crowded, diverse, dangerous, exciting modern city. (And remember that these writers began working in the '80s, when urban decline rendered many cities far less appealing than they are today.) 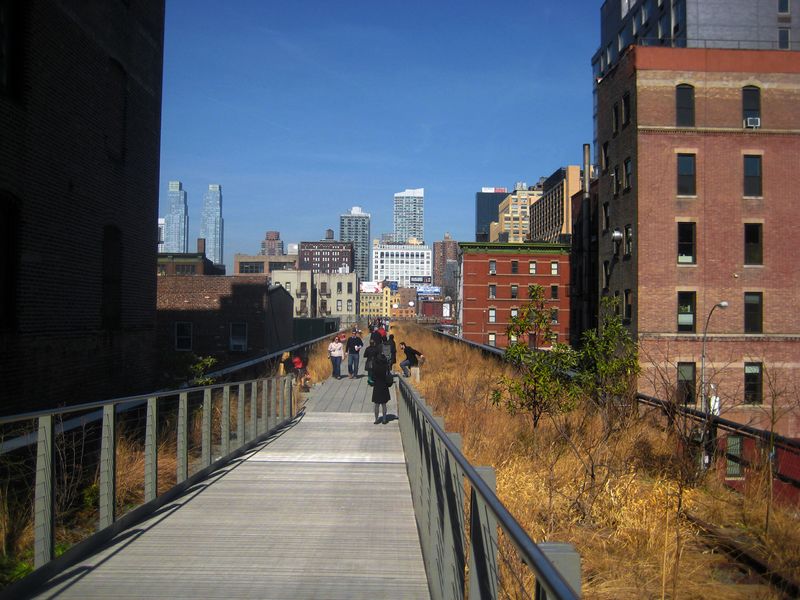 Charles de Lint's Ottowa (Moonheart) and Newford (Dreams Underfoot), Emma Bull's Minneapolis (War for the Oaks), Megan Lindholm's Seattle (Wizard of the Pigeons), Francesca Lia Block's Los Angeles (Weetzie Bat), Neil Gaiman's London (Neverwhere) -- along with more recent creations such as Delia Sherman's Manhattan (Changeling) and Holly Black's Jersey Shore (Tithe) -- are urban spaces in which the mythopoeic history of the land has re-asserted itself. The human protagonists of their books are those who hunger, in one way or another, to find that connection...and then to use it in concert with the unique gifts that cities alone can offer. 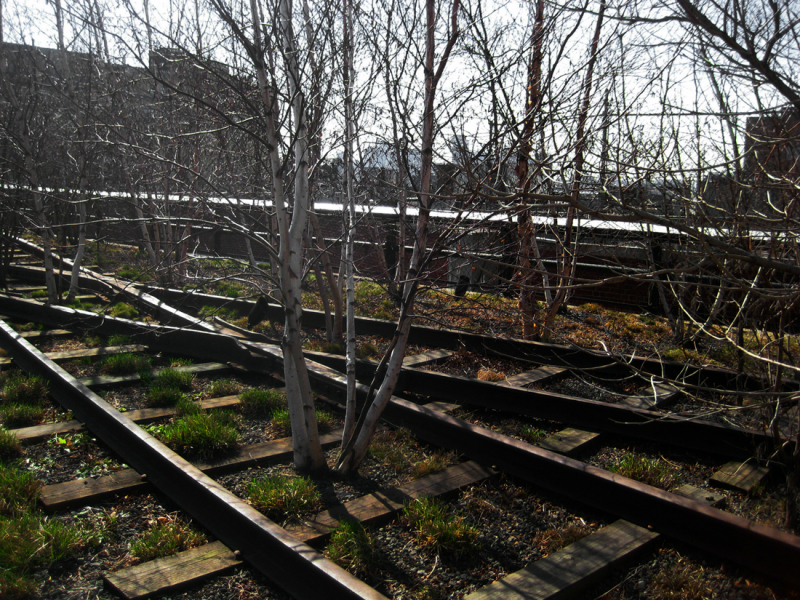 As Raquel says in her post script above, a city traversed on foot can be just as creatively inspiring as a woodland path or wilderness trail, at least for those open to its rhythms; for those who are paying attention. The following passage on urban walking comes from Rebecca Solnit's Wanderlust: A History of Walking, which devotes several chapters to the subject. To me, as a former New Yorker, this description of "city magic" rings absolutely true:

"There is a subtle state most urban walkers know, a sort of basking in solitude -- a dark solitude punctuated with encounters as the night sky is punctuated with stars -- one is altogether outside society, so solitude has a sensible geographical explanation, and there is a kind of communion with the nonhuman. In the city, one is alone because the world is made up of strangers, and to be a stranger surrounded by strangers, to walk along silently bearing one's secrets and imagining those of the people one passes, is among the starkest of luxuries. This uncharted identity with its illimitable possibilities is one of the distinctive qualities of urban living, a liberatory state for those who come to emancipate themselves from family and community expectation, to experiment with subculture and identity. It is an observer's state, cool, withdrawn, with senses sharpened, a good state for anybody who needs to reflect or create. In small doses, melancholy, alienation, and introspection are among life's most refined pleasures. "Not long ago I heard the singer and poet Patti Smith answer a radio interviewer's questions about what she did to prepare for her performances onstage with, 'I would roam the streets for a few hours.' With that brief comment, she summoned up her own outlaw romanticism and the way such walking might toughen and sharpen the sensibility, wrap one in an isolation out of which might come songs fierce enough, words sharp enough, to break that musing silence. Probably roaming the streets didn't work so well in a lot of American cities, where the hotel was moated by a parking lot surrounded by six-lane roads without sidewalks, but she spoke as a New Yorker. 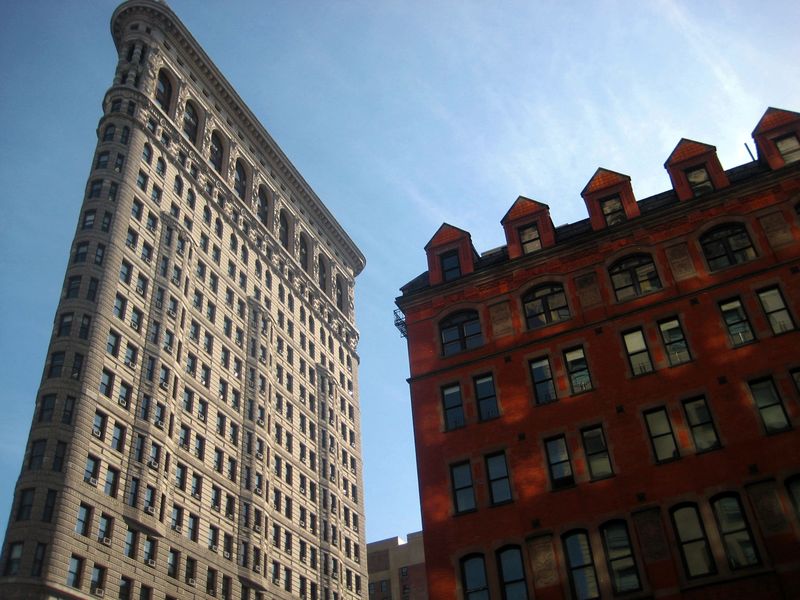 "Speaking as a Londoner, Virginia Woolf described anonymity as a fine and desirable thing, in her 1930 essay 'Street Haunting.' Daughter of the great alpinist Leslie Stephen, she had once declared to a friend, 'How could I think mountains and climbing romantic? Wasn't I brought up with alpenstocks in my nursery and a raised map of the Alps, showing every peak my father had climbed? Of course, London and the marshes are the places I like best.' Woolf wrote of the confining oppression of one's own identity, of the way the objects in one's home 'enforce the memories of our experience.' And so she set out to buy a pencil in a city where safety and propriety were no longer considerations for a no-longer-young woman on a winter evening, and in recounting -- or inventing -- her journey, wrote one of the great essays on urban walking." 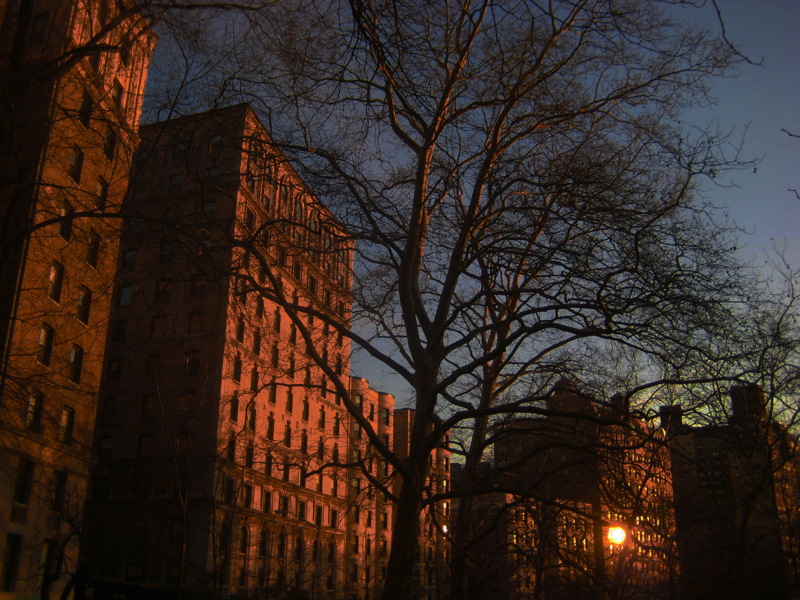 The passage by Rebecca Solnit is from Wanderlust: A History of Walking (Viking, 2000); all rights reserved by the author. The photographs were taken in New York, the city where I came of age as young writer/editor, and that I still think of as my urban home. I highly recommend Patti Smith's book Just Kids, a wonderful memoir of her own youth in New York; Lauren Elkin's Flâneuse: Women Walk the City in Paris, New York, Tokyo, Venice, and London; and Olivia Laing's The Lonely City: Adventures in the Art of Being Alone. For more on the history of the Urban Fantasy genre, see Austin Hackney's survey of the field. For a post on the life and work of Urban Fantasy writer Charles de Lint, go here.

in Life in the city, On the creative process, Walking | Permalink | Comments (21) 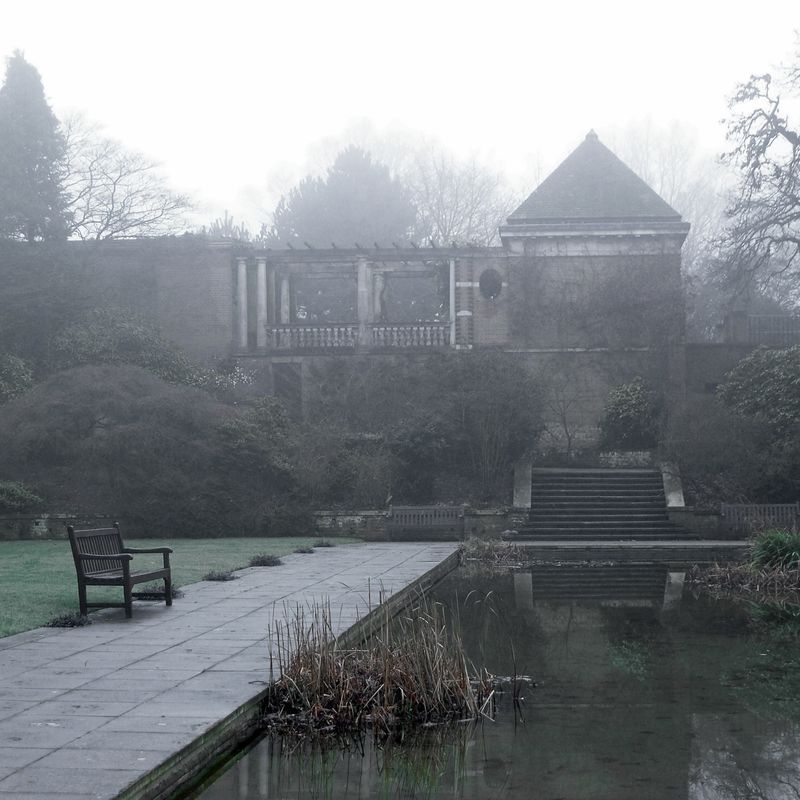 “I know this much: that there is objective time, but also subjective time, the kind you wear on the inside of your wrist, next to where the pulse lies. And this personal time, which is the true time, is measured in your relationship to memory.”  - Julian Barnes (from The Sense of an Ending) 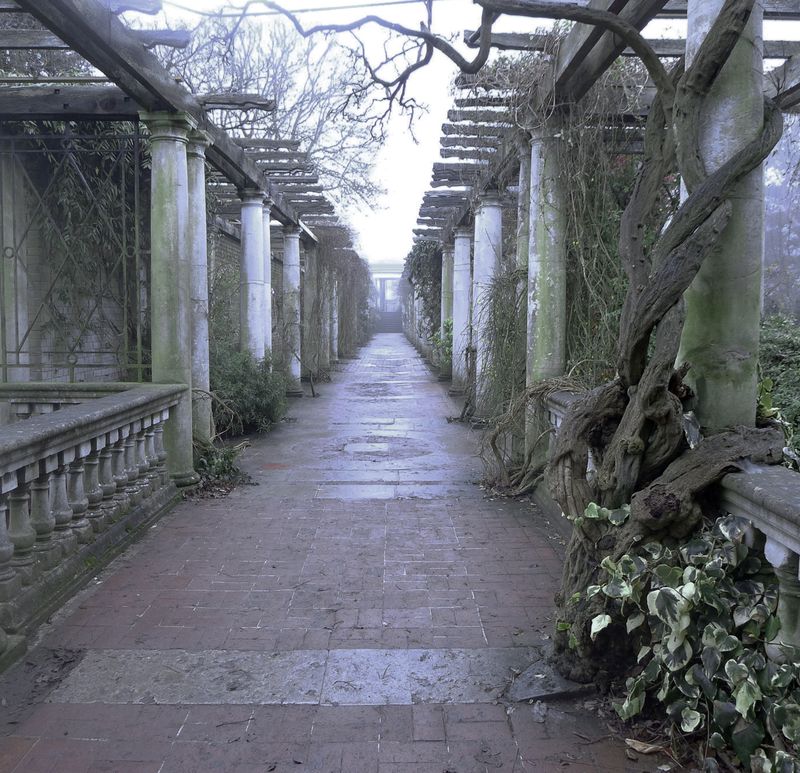 Nancy Wood (from Many Winters: Prose and Poetry of the Pueblos) 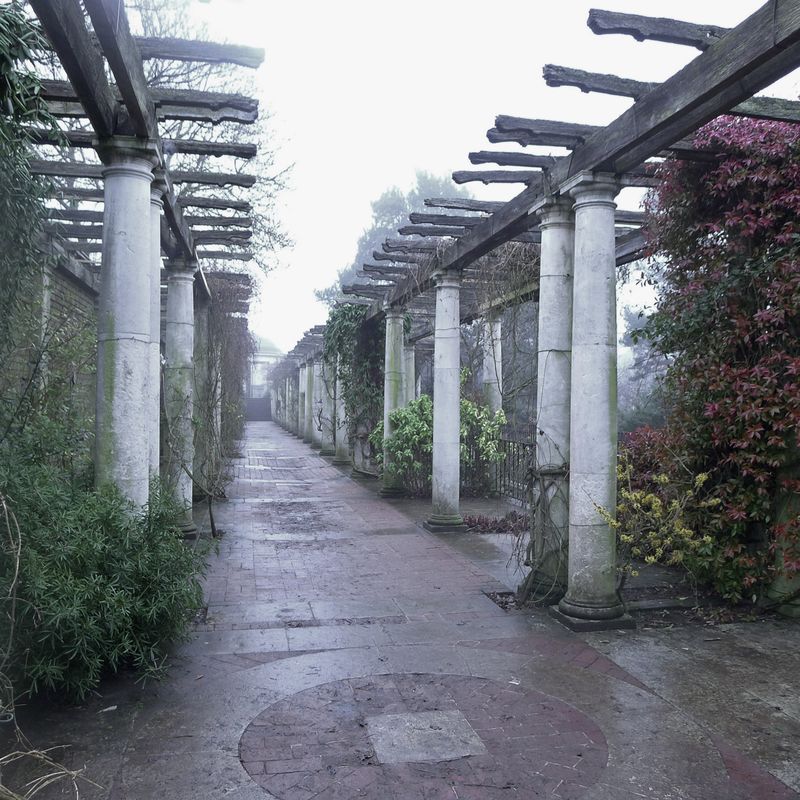 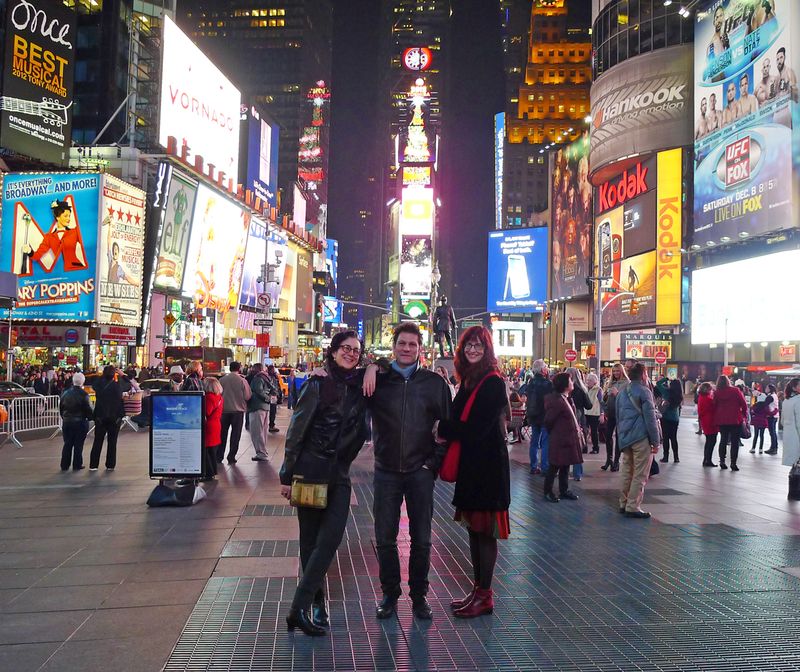 "It's the emptiest and yet the fullest of all human messages: 'Good-bye.' ” - Kurt Vonnegut

Howard and I are leaving New York today, with fond farewells to all the friends, colleagues, and family members who have made the last month such a delightful, stimulating, and richly creative time. Thank you all.

Photo above: A stroll through Times Square on our last night in the city, with Howard and our NYC hosts (and dear friends) Ellen Kushner and Delia Sherman.

Below:  A candle for me to wish on last night.... And may the wish come true. 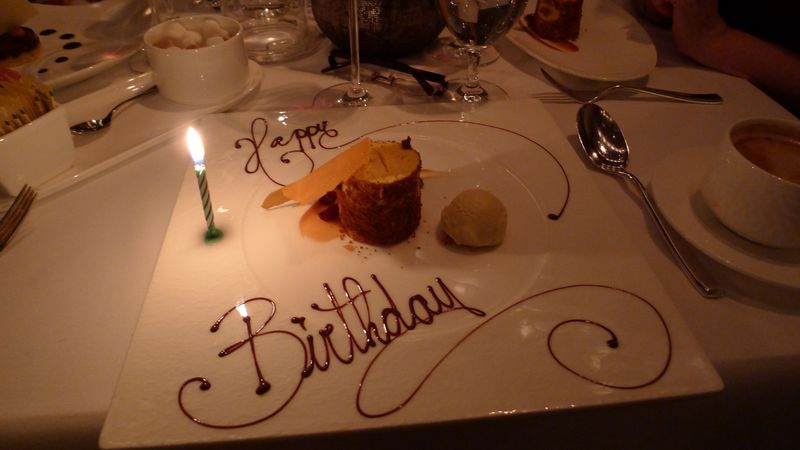 I'll be back in my Devon office (and back on this blog) on Monday, Dec. 10. Till then, have a very good week, everyone. Be well. And be magical.

The purpose of art 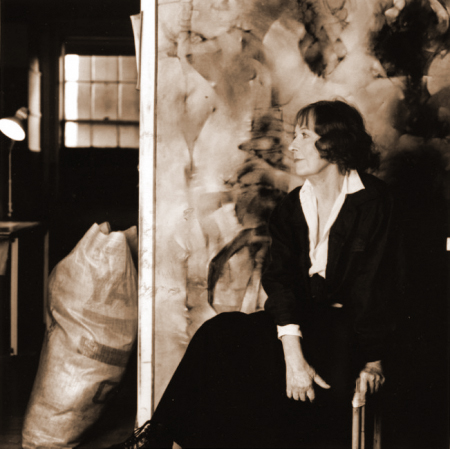 “Art has always been the raft onto which we climb to save our sanity. I don't see a different purpose for it now.” - Dorethea Tanning (1910-2012)

Tanning, of course, was one of great Surrealist writers and artists of the 20th century -- and, like Zora Neale Hurston, spent formative years in New York City; she also lived in Arizona and France over the course of her long life. The letter below is from Tanning to her friend and fellow-artist Joseph Cornell. More illustrated letters can be seen on the Smithsonian site. (And for those of you in New York, there's a terrific exhibition of Beatrix Potter's illustrated letters at the Morgan Library right now.) 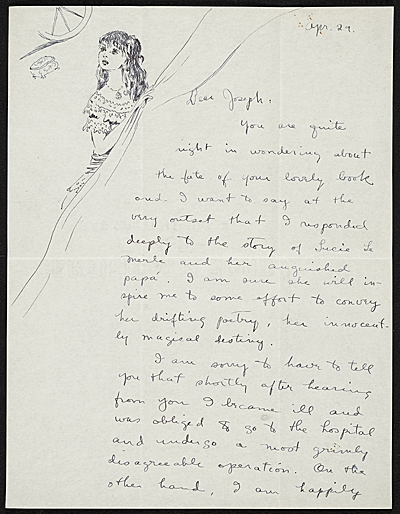 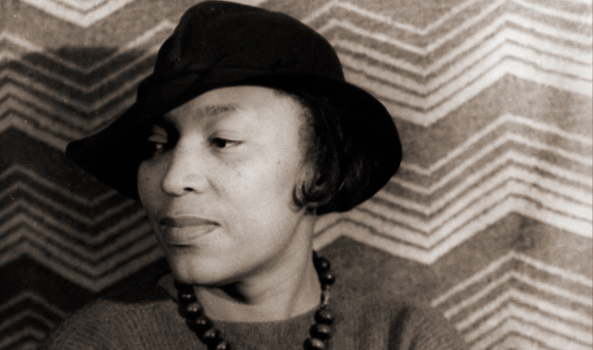 So very true. The last few years have been the former for me, but the wheel is slowly turning. And for you?

“Here was peace. She pulled in her horizon like a great fish-net. Pulled it from around the waist of the world and draped it over her shoulder. So much of life in its meshes! She called in her soul to come and see.”

So very beautiful. Like an Edmund Dulac illustration in words.

"I want a busy life, a just mind, and a timely death."

I've certainly got the first at the moment; I'm working on the second. The third is out of my hands so I'll get to work and let the Mystery be....