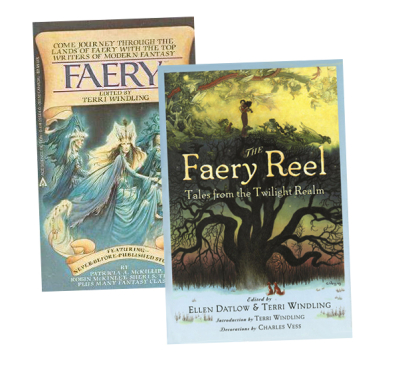 The Faery Reel is part of the Mythic Fiction Quartet which Ellen Datlow and I created for Viking Press. The book contains original stories inspired by faery folklore from around the world. The cover art and charming interior illustrations are by Charles Vess -- who, like Brian Froud, has spent many years walking the roads of Faerie. The authors in the volume include Holly Black, Emma Bull, Charles de Lint, Neil Gaiman, Tanith Lee, Kelly Link, Gregory Maguire, Patricia A. McKillip, and Jane Yolen. The Faery Reel was a World Fantasy Award nominee, and Kelly Link's fabulous story for the book, "The Faery Handbag," won the Hugo, Nebula, and World Fantasy Awards. (Bravo, Kelly!) You can read it online here.

Faery, published many moons ago when I was a young sprout of an editor at Ace Books, also contained stories about faery realms world-wide, and was also a World Fantasy Award nominee. Published way back 1985, the book is a bit dated now overall, but contains some fine contributions nonetheless by John Crowley, Patricia A. McKillip, Robin McKinley, Sheri S. Tepper, and Jane Yolen, among others.