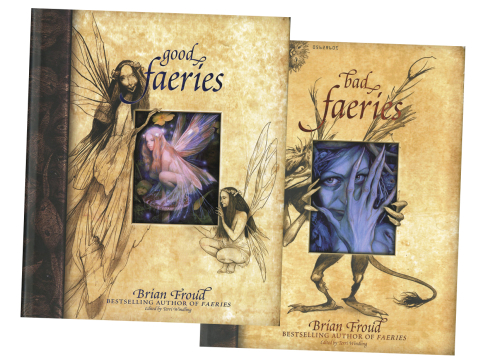 Faeries, the acclaimed volume of faery art and lore by Brian Froud & Alan Lee, had been an international bestseller -- yet despite its success, Brian found it difficult to interest publishers in a follow-up book. They wanted him to paint something new and different  (dragons? giants? unicorns?) -- to which he kept patiently explaining that he was a faery painter, not a general illustrator, and that faeries were his life's passion and his realm of expertise.

Then Brian had a brainstorm and tried a new approach. He proposed a funny book about the faeries, coming up with the idea of a Victorian young lady who "pressed" faeries between book pages, much as her compatriots pressed and collected flowers.  Thus Lady Cottington's Pressed Fairy Book was born -- and it, too, became bestseller, proving that readers were still interested in the faeries. And in Brian's vision of them.

Now he could finally publish the art book he had long been planning: Good Faeries, Bad Faeries, an exploration of the subject ranging from age-old folklore traditions to faeries in the modern world. The text would be by Brian himself, discussing his pictures, his knowledge of faery lore, and his personal interactions with these spirits of nature. But he had never written a book before...and that's where I came in.  My job was to help Brian turn his many pages of notes (scribbled on paper scraps and the backs of envelopes, stuffed into drawers and books and jacket pockets) into the organized prose of a manuscript -- as well as to contribute research and text on faeries in folklore world-wide.

It was a true honor to work on Good Faeries, Bad Faeries with one of the most original and beloved artists of our day -- and absolutely fascinating to be engaged in Brian's creative process from the germ of the idea to the completed book.