Tales of a Half-Tamed Land 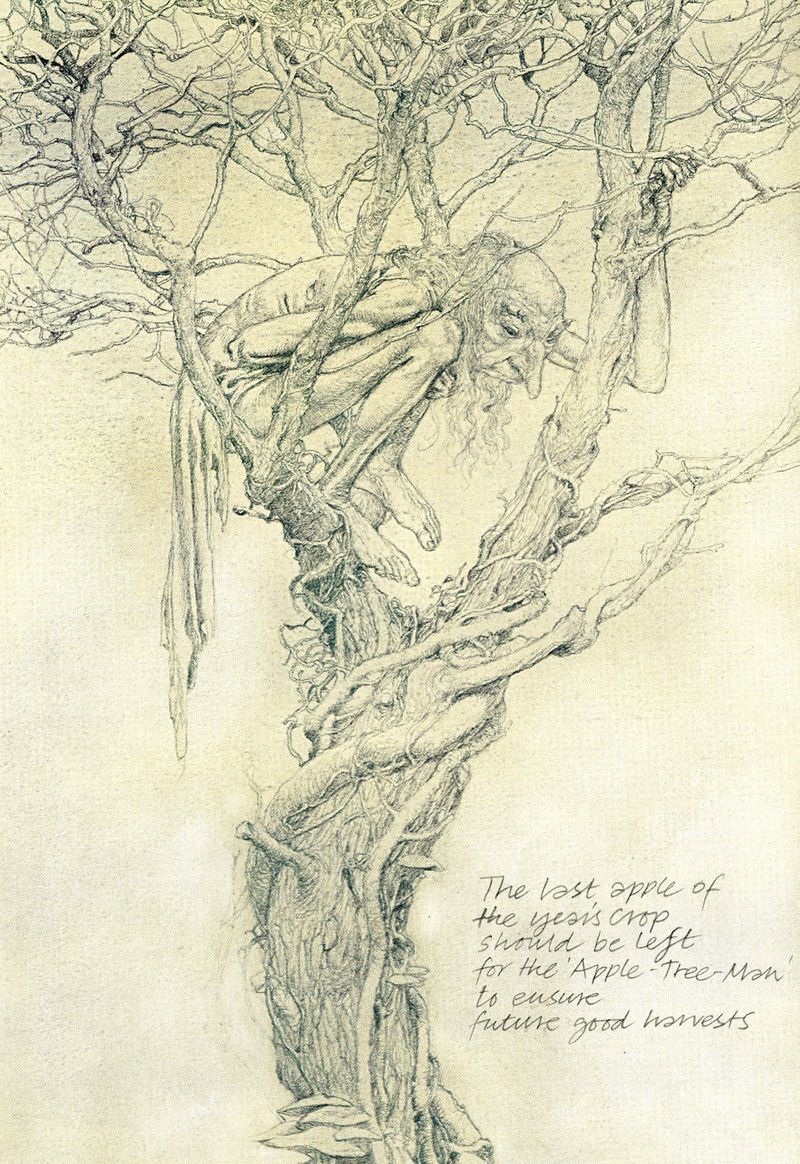 "Devon, even till the present century, was a county of isolated communities," wrote Ralph Whitlock in The Folklore of Devon in 1977. "Partly this was due to its geology and topography, partly to its history. The county,  the third largest in England, has as its nucleus the huge, austere, and almost uninhabited massif of Dartmoor, around which the more fertile countryside is arranged as a frame. On the north it is fenced by 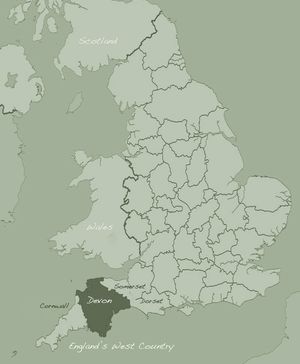 another bleak plateau of almost equal altitude,  although Exmoor itself is two-thirds in Somerset. Another maze of steep-sided hills serves as a barrier between Devon and south Somerset and west Dorset. Nor are the intervening vales flat plains but rather a tangle of lesser hills, many of them buried in woods. It is a secretive, half-tamed countryside. "

The folklore of this county, Whitlock explains, is "a rich mixture of Celtic, Saxon, Danish and goodness knows what other elements, including quite possibly some that are pre-Celtic. The Devon moors are still the alleged haunt of pixies. We are not surprised to hear much about giants, bogeymen and witches, and the Devil has here a richer heritage than in most English counties. Customs such as the wassailing of apple-trees has lingered long on Devonshire farms, and tales of smugglers, fairs, and tin-miners abound." 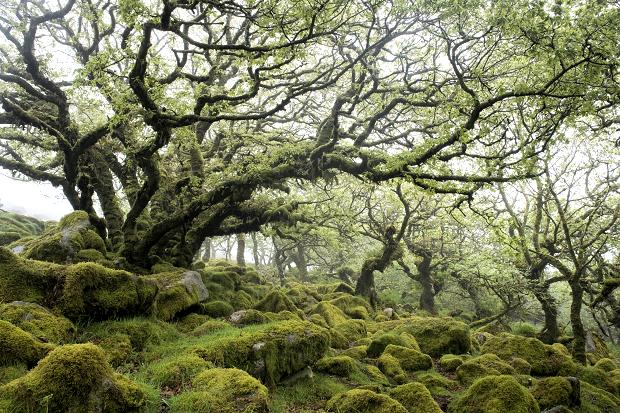 "Piskies" or "pixies" are the fairy folk of Devon, though the name tends to them sound rather daintier than they are. In most accounts, they are small but earthy creatures, usually dressed in natural elements or rags, although sometimes appearing in lordly splendor to those with Fairy Sight. Pixies, reports Whitlock, "are timid and shy, live in remote places, often in caves or holes in rocks, venturing out only at night. They are, in general, well disposed towards the human race and have been known to lend a friendly hand with farm and domestic work. Nevertheless, the creatures are not to be trifled with, for they understand magic and can make life unpleasant for anyone who offends them.... 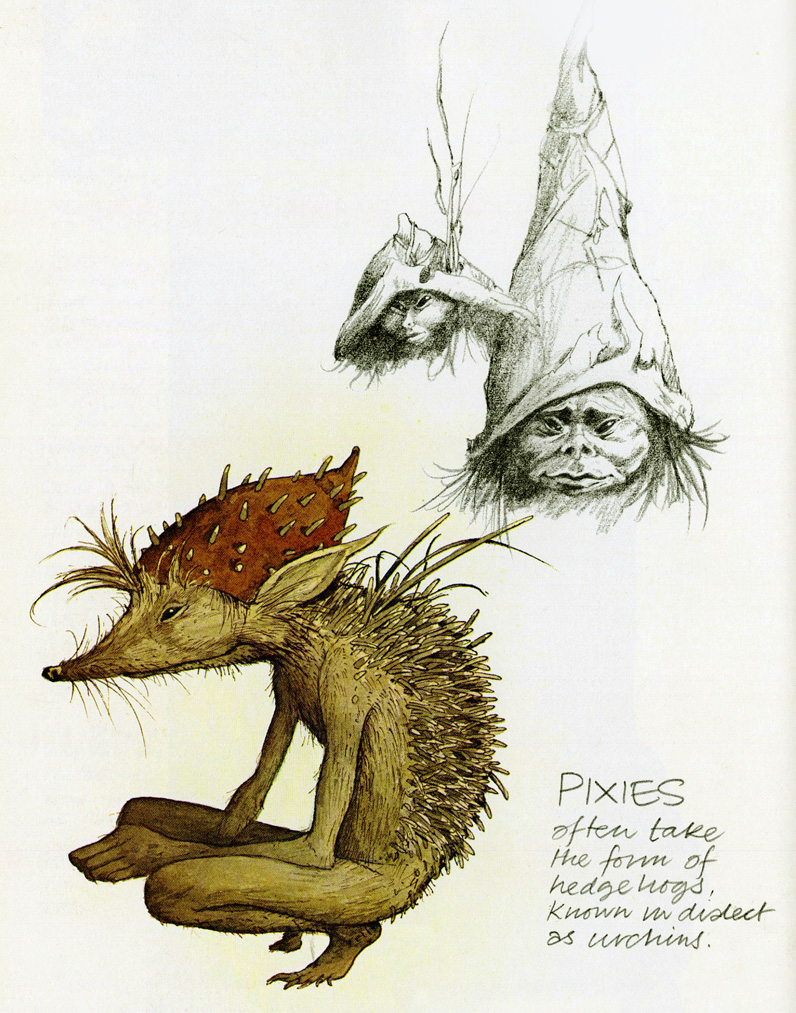 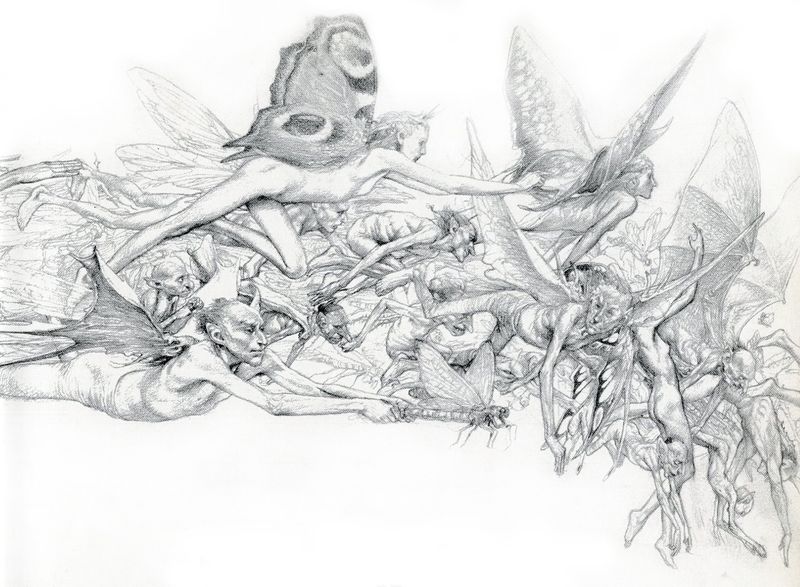 "Many remote and secluded places, especially on the moors, have particular associations with pixies. A colony is said to live on Pixie Rocks, in a combe near Challacombe. On Gidleigh Commons, high on Dartmoor, a large hut circle, ninety feet across, is supposedly haunted by pixies. No horse will cross it. The villagers of Chagford claim to have heard pixies on the moors on quiet nights." (And indeed, we have.) 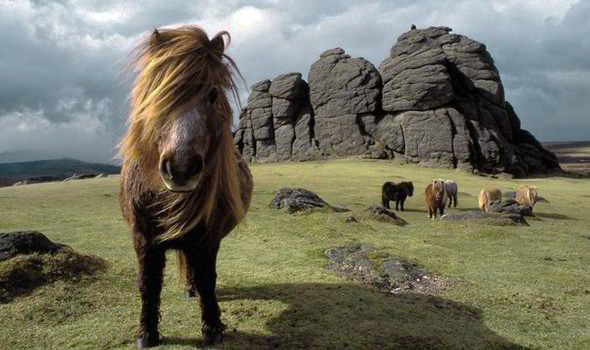 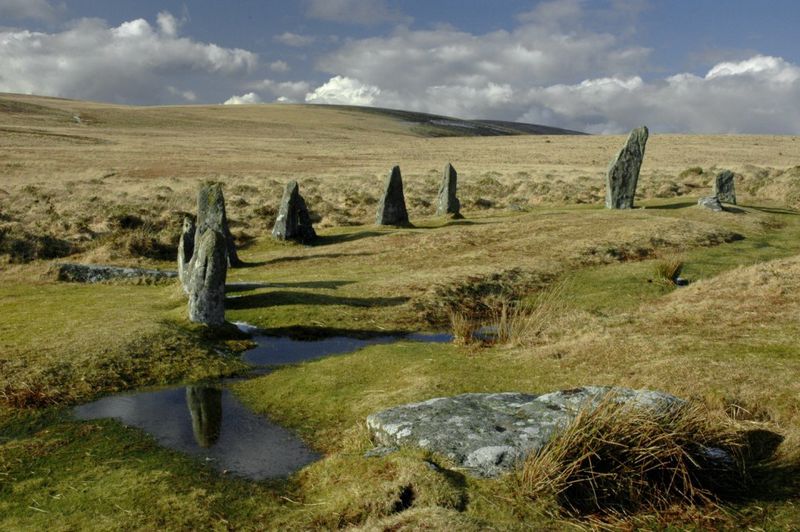 "The queen of the fairies is said to have created South Down Bridge, near Tavistock, by crystallizing the drops of water in a rainbow over the stream. First becoming tiny pebbles, then great stones. At Chudleigh Rock, a cave, waterfall and creeper-hung glen are alleged to be the favorite haunt of pixies. King Castle, an ancient earthwork near Simonsbath, is reputed to have been built by pixies, as a defense against hostile spirits from neighboring mines. 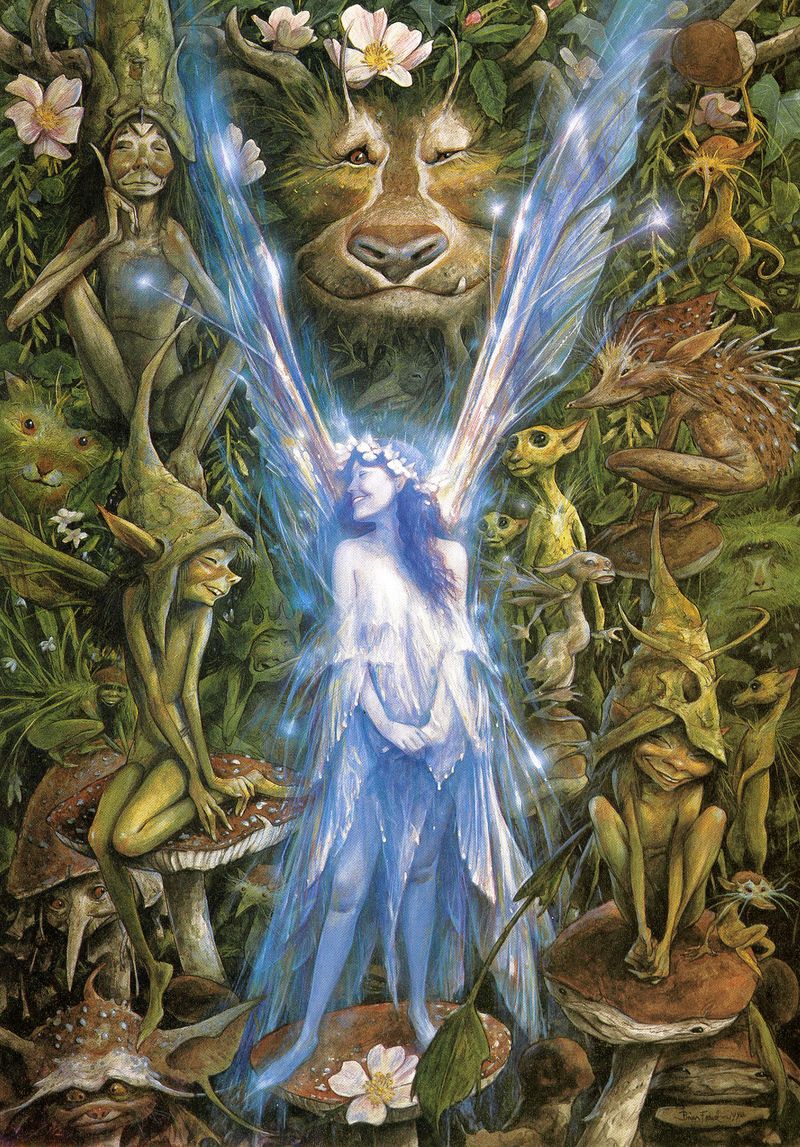 "Pixies are said to dance in a number of the stone circles on Dartmoor, including the one on Huccaby Moor. A story is told of Tom White, a young man of Postbridge, who went courting a girl at Huccaby, which involved frequent five mile walks each way over the wild moors. One summer night he saw a crowd of pixies dancing near Bellever Tor. He watched them for awhile and then tried to steal away but the pixies saw him. They formed a ring and danced around him till dawn, making him twirl like a top all the time. When eventually he was released, at sunrise, exhausted and frightened, he declared he would never risk such an experience again. He died a bachelor." 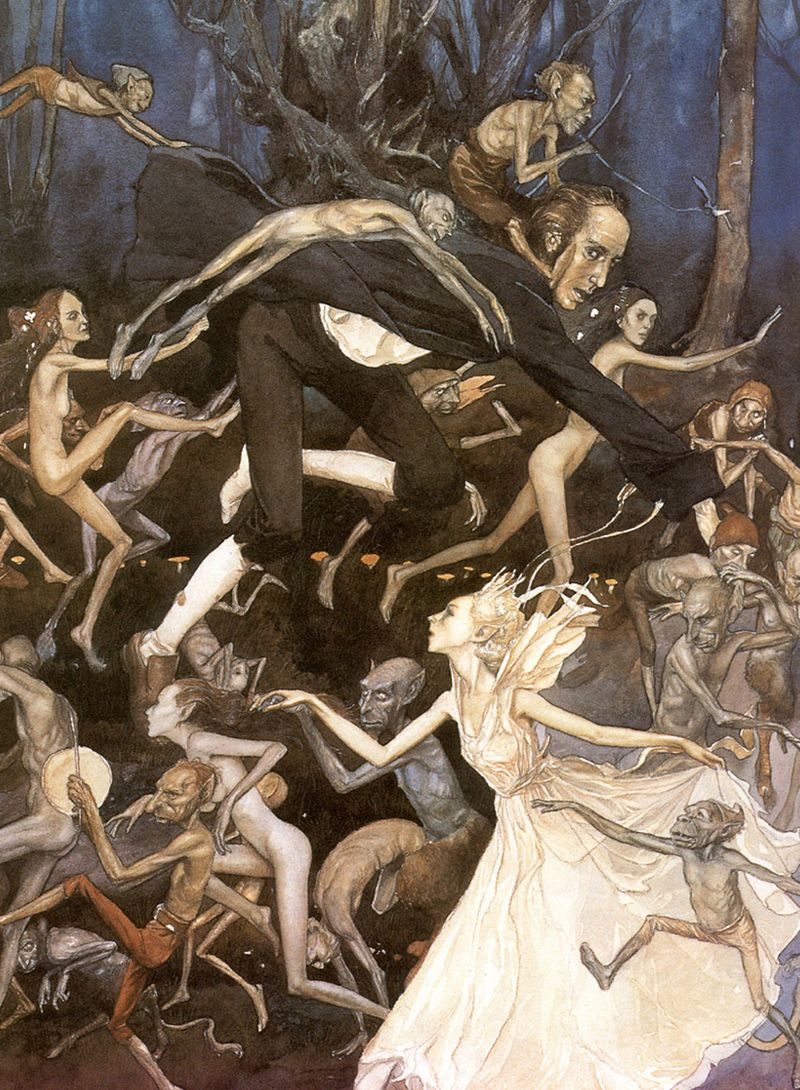 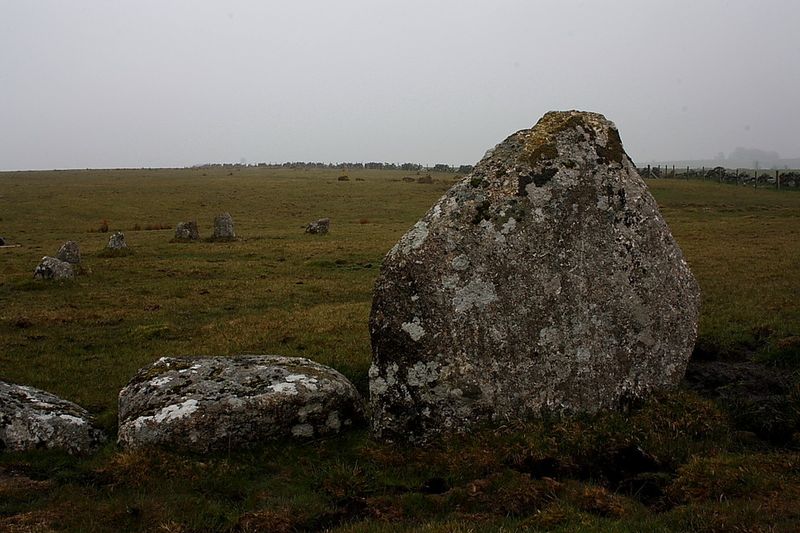 "The pixies in general, though sometimes mischievous, are simple, kindly folk," Whitlock continues, "ready to do a good turn for small rewards. And some of the pixie legends are quite lovely. We have, for example, the story of the old woman and the tulip garden. She lived in a cottage near Tavistock and took great pride in her garden, 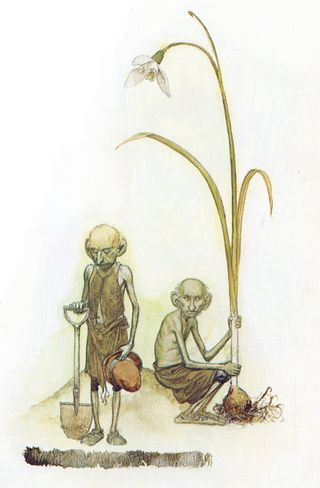 especially her tulips. Before her cottage had been built, the site was a haunt of pixies, and they continued to come and enjoy the flowers in the garden. At night they could be heard singing to their babies and caressing them. Thanks to the pixies, the tulips not only grew unusually tall and fine but as delicately fragrant as roses.

"When she died her heir destroyed the flowers and grew vegetables instead; the tulip bed was planted with parsley. The pixies were so upset that for years afterwards they saw to it that the garden grew nothing worthwhile. Instead, they transferred their attentions to the old woman's grave (which her relations had neglected), planting with lovely little flowers and neat grass lawns."

In another tale from Tavistock, "an old woman, confused and mistaking the time, got up at midnight and set out for market. Somewhere on the moors, in the small hours, she heard the cries of the Wild Hunt and saw a frightened hare, which was evidently the quarry. Being kind-hearted, she gathered up the creature and hid it in one of her panniers. Presently the devil himself appeared, in the form of a black-clothed horseman, 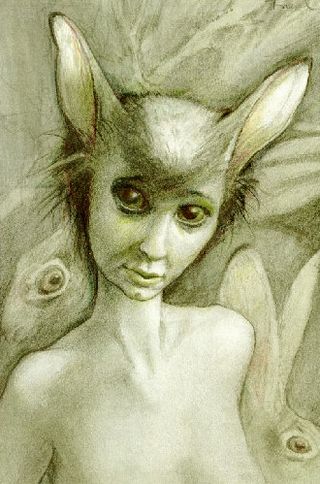 cloven-hoofed, horns sprouting from his head, and riding a headless horse. He asked her if she had seen the hare, but she replied, 'No.'

"After he had passed, she released the hare from the pannier. It turned into a beautiful young lady in white, who told the startled old woman that she was not an inhabitant of this world, but was suffering punishment for a crime committed during her earthly life. She said she was doomed to be constantly pursued either above or below ground by evil spirits, 'until I could get behind their tails, whilst they passed on in search of me.'

"In return for the old woman's help in fulfilling this condition, she promised her, as a reward, 'that your hens shall lay two eggs instead of one, that your cows shall yield the most plentiful store of milk all the year round, and that you shall talk twice as much as before, and your husband stand no chance at all in any matter between you to be settled by the tongue!' It is said that from then on the affairs of the old woman prospered." 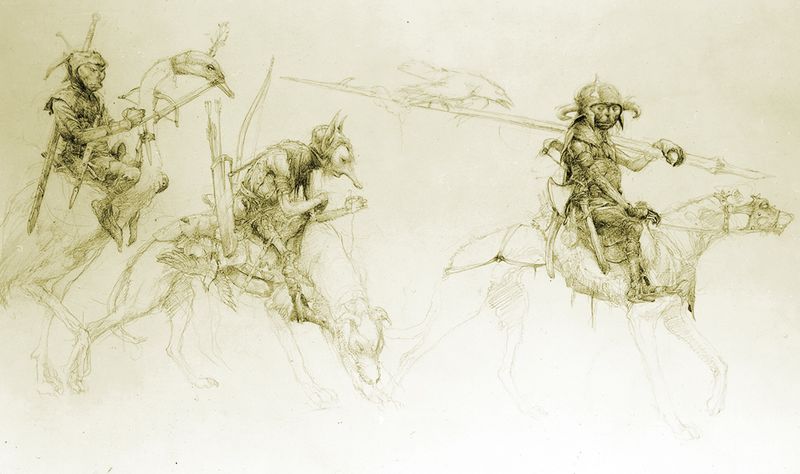 There numerous legends of spectral black hounds (take note, Tilly); also of ghosts and haunts of various sorts, and of witches who roam the moor by night in the shape of hares: 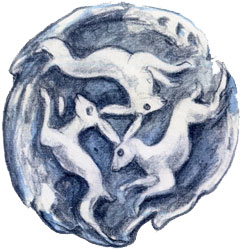 "J.R.W. Coxhead tells the story of Moll Stancombe, of Chagford, who, in the form of a hare, was often coursed by hounds but could never be caught. One of her former lovers, whom she had rejected, loaded a gun with silver bullets and attempted to shoot her, but the gun exploded and blew off his hand. A rival witch at length revealed that Moll could be caught by  a spayed bitch. Hare and bitch seemed evenly matched for a long time, but at last the dog managed to bite her flank as she scrambled through a hedge. The owner of the dog then went to Moll's cottage, looked through the window, and saw her putting plaster on a wound. It corresponded exactly with the spot which the dog had bitten." Coxhead reports that no further harm came to Moll, who never again appeared as a hare...at least where ex-lovers could see her. 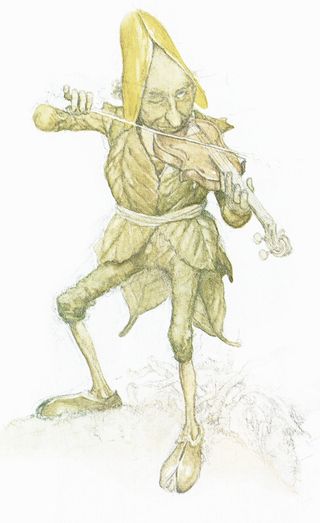 Folk musician Seth Lakeman, who lives over Tavistock way, has drawn on the legends and history of Dartmoor for some of his best work-- including "Kitty Jay," "The Bold Knight," and "The Courier" (which you'll find in this previous post), and "The White Hare," performed with Lisbee Stainton in the video below.

If you go hunting, Lakeman warns,
Or go calling out your prey,
Or if you see a fair maid
With hair an ashen grey,
Careful you don't catch her,
Or give her right of way,
For she will look upon you
Steal your soul away... 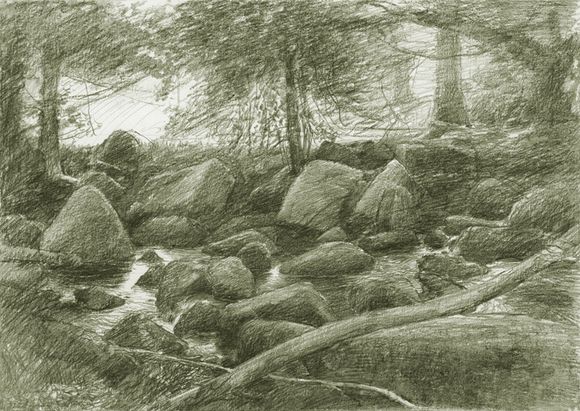 The art above is by my Chagford neighbors (and experts on Devon folklore) Brian Froud and Alan Lee., who published the classic book Faeries together many years ago, and numerous other books individually since. Titles and credits are in the picture captions, as well as photography credits. Devon Folklore by Ralph Whitlock was published by BT Batsford, Ltd., London, 1977. All rights to the text and images in this post reserved by the authors and artists. If you'd like to read more on the folklore of Devon, there's an old article of mine on the subject on the World of Froud website.