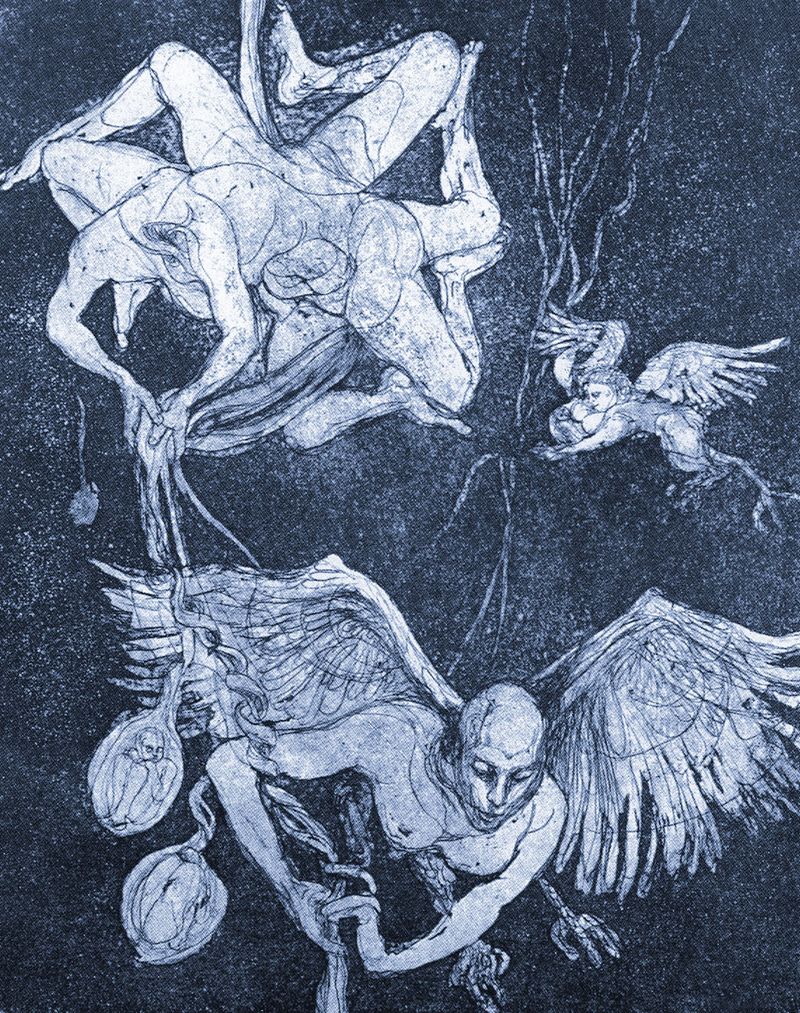 Artists have always expressed themselves in the metaphoric language of myth -- from the earliest carvings and pottery decorations to Renaissance paintings such as Botticelli's "Primavera" and "The Birth of Venus," to modernist works such as Picasso's Minotaur drawings and paintings. One of my favorite artists working in this area today is painter and printmaker Jacqueline Morreau, who uses mythic symbolism to explore psychological and political themes of contemporary life. 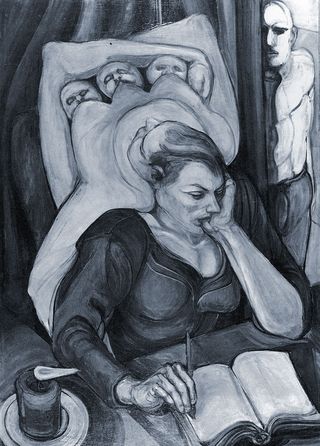 The image on the right, "The Divided Self," is one of Morreau's metaphoric self portraits, while the etching above depicts the dreaded Three Fates of classical myth. These women spin and measure out the life threads of mortals and immortals alike: Clotho spins the thread, Lachesis determines its length, and Antropos cuts it off when life is at its end. According to Hesiod, all was Darkness at the beginning, all was void and nothingness, until the cosmos stirred and Chaos split from Darkness, containing the potential for life within it. In the very moment of that separation, the Three Fates emerged from the depths of Chaos. They are primal, powerful female divinities that do not bow to any god, holding sway over every living creature, for better or for ill. (As a sidenote, it's interesting to know that the earliest fairies of Europe were related to the Fates — they were known as Fateful Women, from the Latin word fatare, meaning “to enchant,” and they appeared when a child was born, to bless or curse their destiny.) Three more of Morreau's Fate images are below: Fate as a Potter, Fate with Roller, and the three fates doing their endless, timeless work Under the Sea. 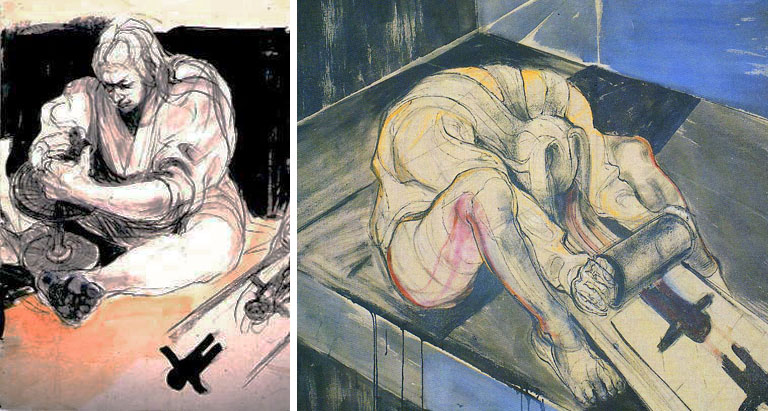 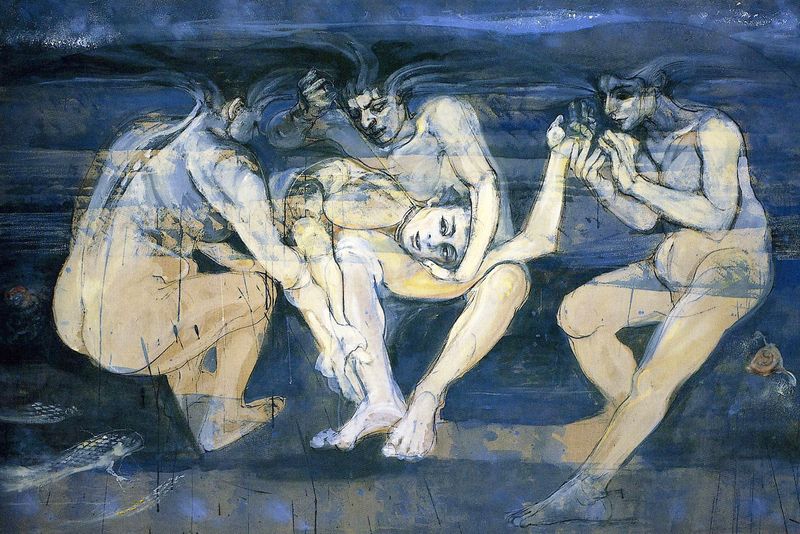 The Greek tale of Eros and Psyche (or Cupid and Psyche in the Roman version) is another story that has stirred Morreau's imagination, providing rich symbols for expressing ideas about sexuality and identity. Psyche is a girl so beautiful that the goddess Aphrodite is filled with jealousy. She orders Eros (the god of Love) to harm the girl -- but he falls in love with her instead, and arranges for Psyche to be safely carried away to a distant palace. Each night, under the cover of darkness, a tender lover comes to Psyche's bed. She does not know that this is Eros, and she's not allowed to see his face. Although she's surrounded by mysteries, Psyche is happy for a time…until she grows homesick and Eros allows her sisters to visit her. 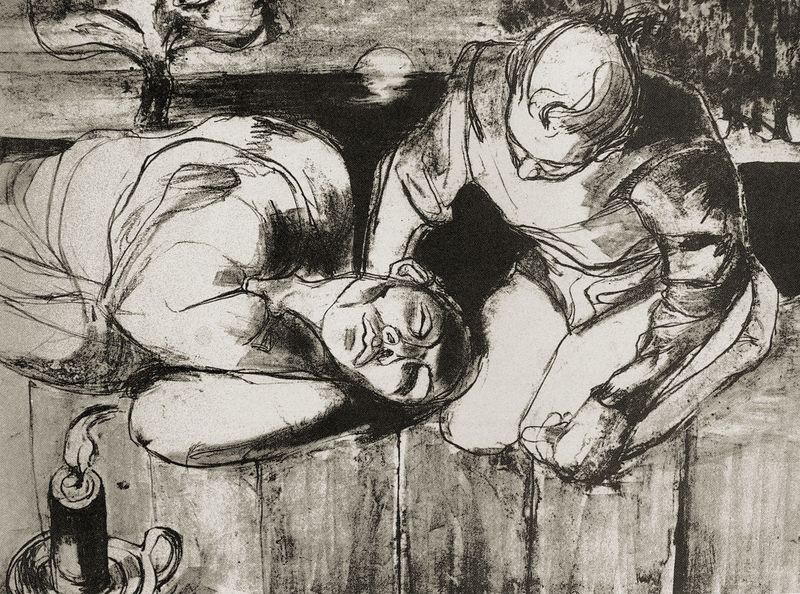 The sisters, believing Psyche is dead, are amazed to find her living in splendor. Jealous of her now, the sisters convince Psyche that her lover must surely be a monster -- for otherwise, they say, she would be allowed to see his face. That night, shaken by her sisters' words, Psyche takes a lamp and a knife to bed -- but when she lights the lamp, she sees it's a beautiful youth who is lying beside her. A drop of oil falls from the lamp, singes his shoulder, and wakes him up. “Is this how you repay my love,” Eros cries, “with a knife to cut off my head?” The ground trembles and the god and the palace disappear from Psyche's sight. 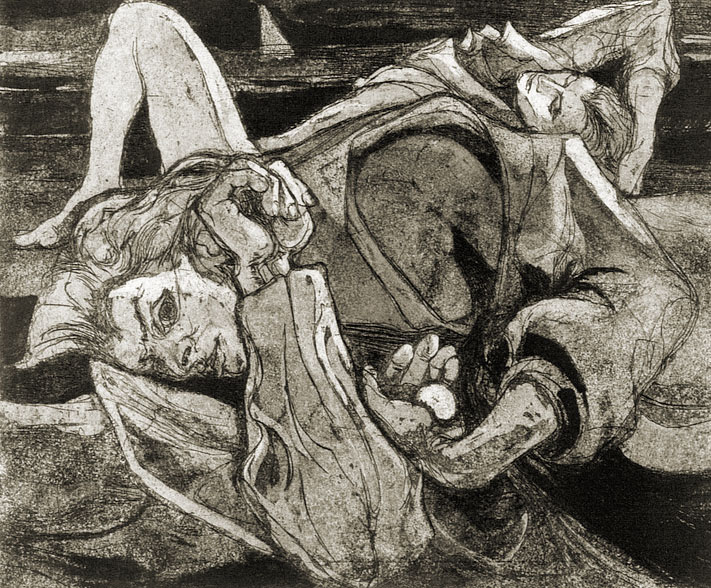 Pregnant now with Eros's child, Psyche bravely sets off to search for him and eventually comes before Aphrodite, the source of her misfortune. She humbles herself before the goddess, but Aphrodite is not easily appeased. She sets the girl three impossible tasks, including a journey to the Underworld. With some timely help from Eros, who still loves her, Psyche succeeds. In the end, Zeus intervenes, soothes Aphrodite, and turns Psyche into an immortal. He then blesses the marriage of Eros and Psyche, and their daughter, a child named Pleasure. 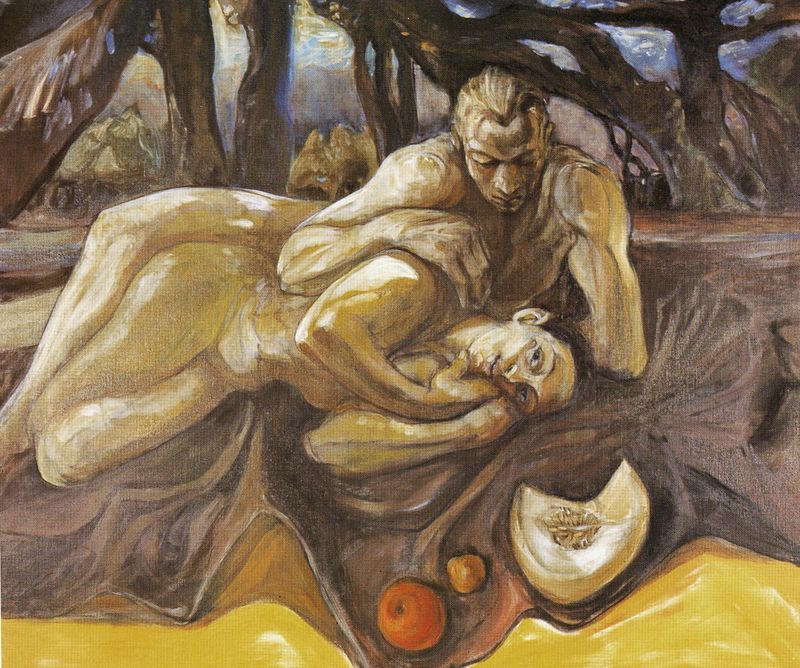 Morreau's various works based on the Persephone story are examinations of conflicted relationships: between men and women, between mothers and daughters, between the powerful and the powerless, between the forces of life and death.

Below is a charcoal study for Hades in her hard-hititng triptych, Persephone: A Season in Hell, along with the first painting in the triptych, "Rape and Abduction." 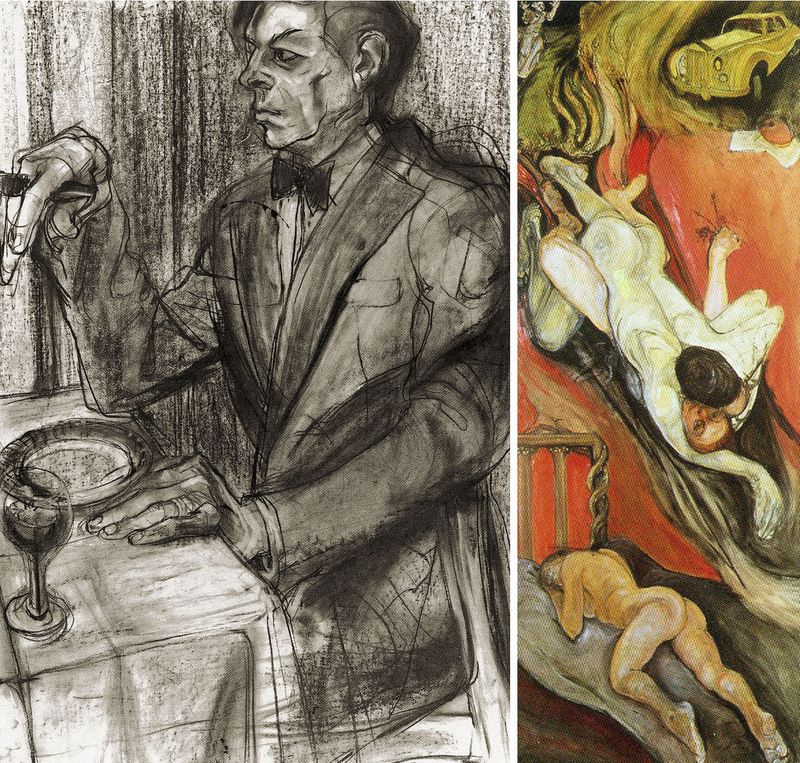 She has also turned her sharp gaze on the stories of women in Biblical myth, capturing potent moments of transformation, for good or ill. In the drawing below, Lot's wife is about to make the fateful step that will turn her to salt. In "Paradise Now" (depicted below in two different mediums), Eve and Adam stand with apple in hand. The whole of earth is the Garden, they seem to suggest. Or it could and should be. 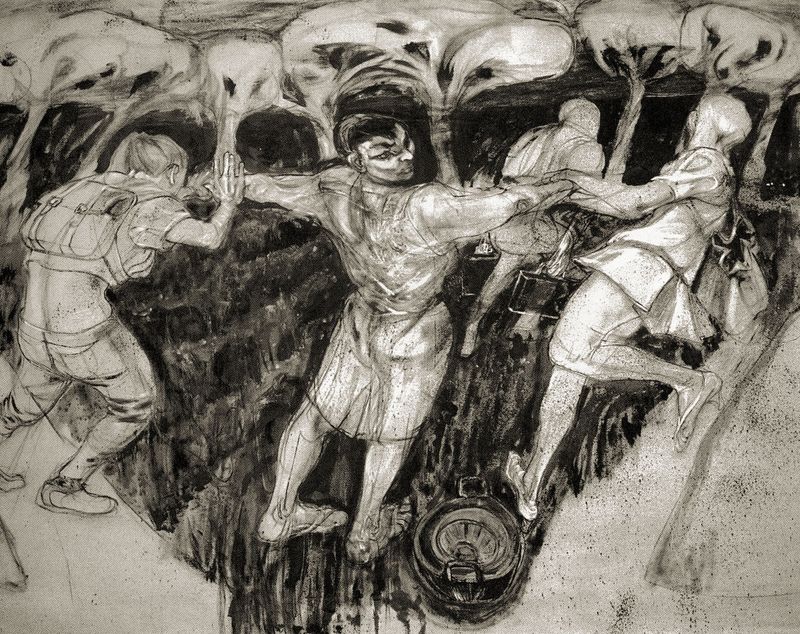 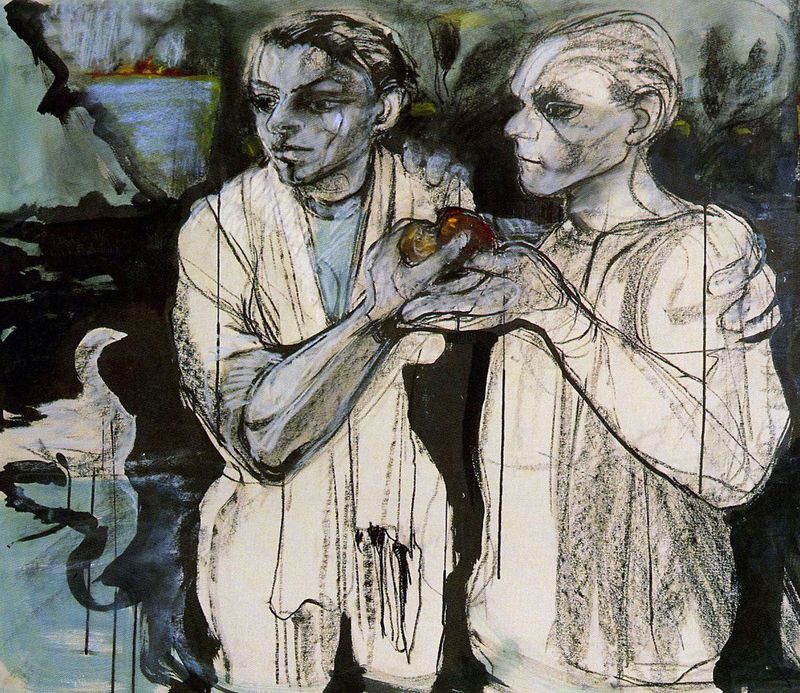 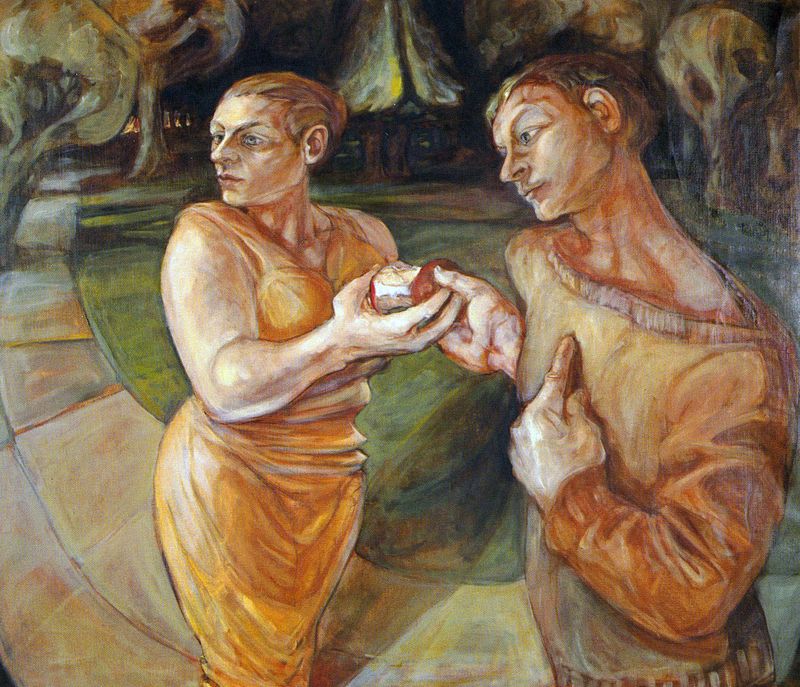 Morreau is an overtly political painter, known for powerful works in response to social injustice and the horrors of war (from the Children's Crusade to World War II to the contemporary Middle East) -- yet her recent creations also include tranquil, luminous paintings of bed sheets, water, and swimmers in the sea. In one interview, she was asked about these dual strands in her body of work:

"Perhaps this represents the basic conflict in my life," she answered, "which I have tried to express in the subject matter, delving into the dark and celebrating the light. I was born into the knowledge of evil in the 1930s, which no one of my generation could escape. That shadow often oppresses me; at the same time, I have had a love affair with nature, which sustains me. I see the world as full of intricacies, complexities and wonders and surprises, yet in spite of that, most things are constant. Because of the legacy of violence, most art of the 20th century focuses on the dark, the distorted, the ugly, and has found strength there. However, that has meant that the light, the beautiful and the joyful are seen as weak. In fact, it is much harder to depict such feelings.

"As I grow older, I'm much more interested in the light." 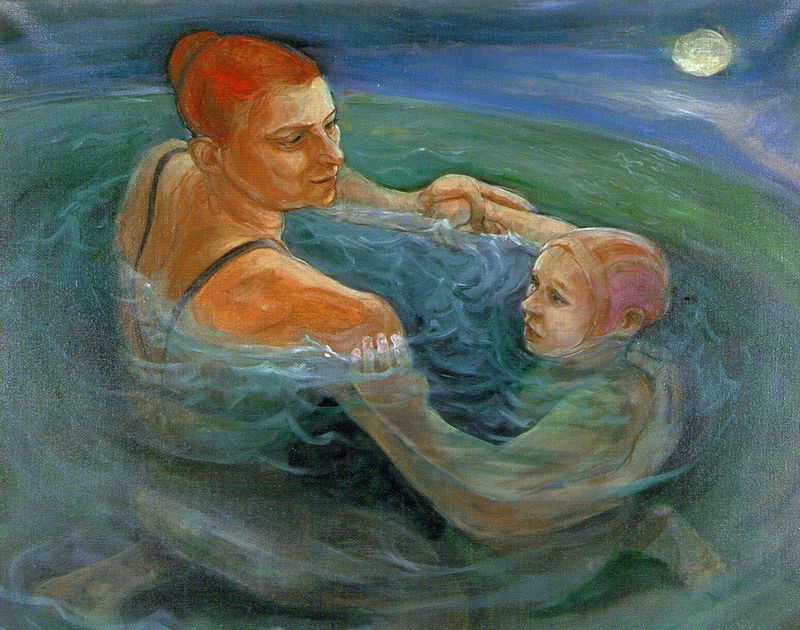 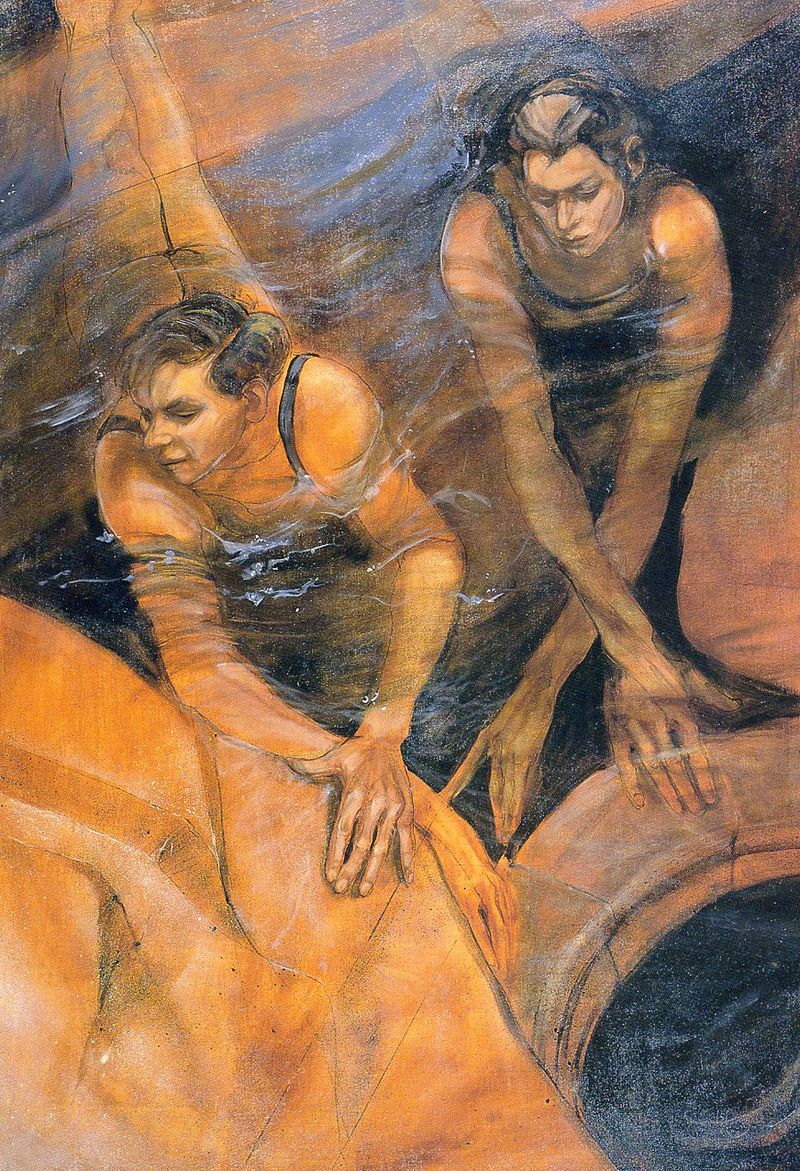 Jacqueline Morreau was born in Milwaukee, Wisconsin in 1929, studied art in Los Angeles, medical illustration at the University of California Medical School in San Francisco, and then etching and lithography in San Francisco and Boston. She moved to England in 1972, and settled permanently in London. Her work has been exhibited in museums and galleries around the world.

The paintings and drawings above are under copright by Jacqueline Morreau and may not be reproduced without her permission; all rights are reserved by the artist.

The text by Terri Windling first appeared in The Journal of Mythic Arts; all rights reserved by the author.

The poem in the picture captions is reprinted from The Journal of Mythic Arts, and is copyright © 1982 by Jane Yolen. All rights reserved by the author.