Iain McCaig received the Spectrum Grand Master Award in 2014. This article, written in recognition of the honor, was published in Spectrum 21: The Best of Contemporary Fantastic Arts, edited by John Fleskes. 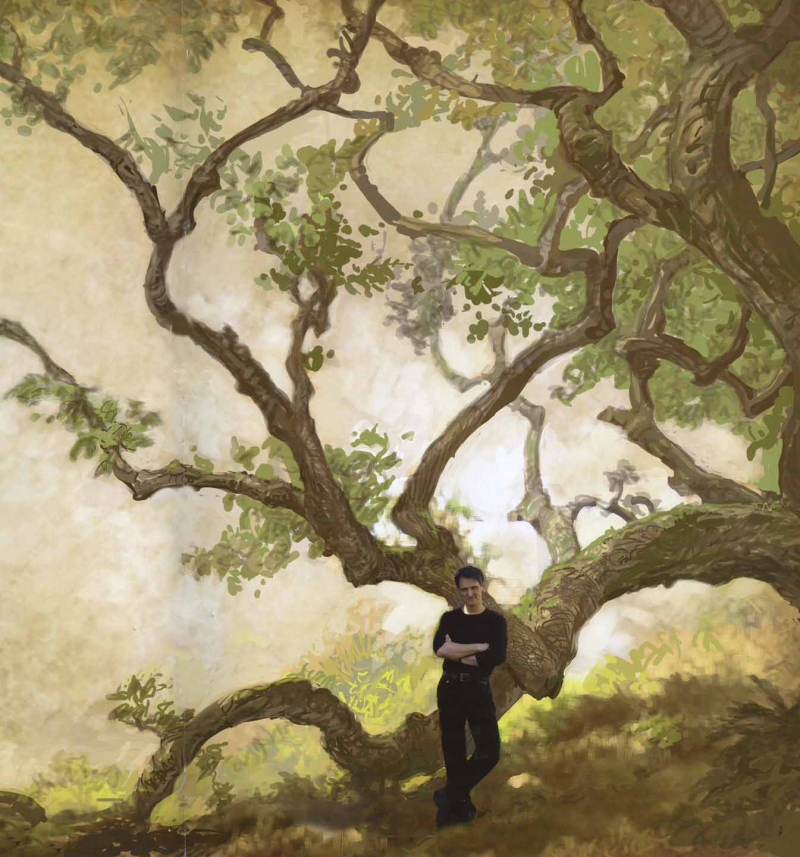 A Grand Master, as Arnie Fenner [co-founder of Spectrum] has explained, is an artist who has worked for at least twenty years at a consistently high level of quality; who has influenced and inspired other artists; and who has left their mark on our field as a whole. "Craft alone," he writes, "is not sufficient to receive the honor: there are many skilled painters who produce solid, profession work. But (and this is key) it fails to resonate. It is admired in the moment and immediately forgotten. A Grand Master's art, on the other hand, gets stuck in the viewer's heart and memory." 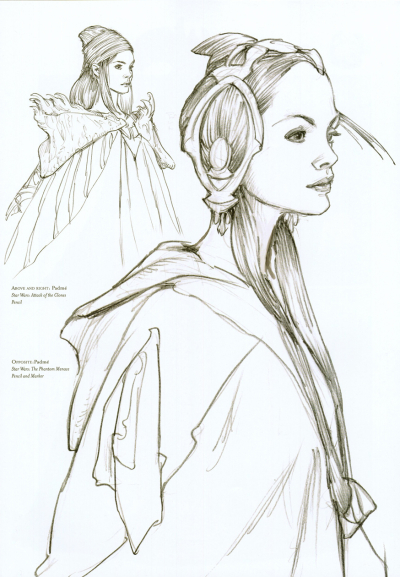 By this measure, it is easy to see why Iain McCaig has been chosen to receive this honor. In a career spanning thirty years (with no sign of waning), he has created wonders for clients that range from publishers, record labels, and game companies to major film directors -- while also producing films and fine art of his own and inspiring generations of younger artists through lectures, workshops, and instructional DVDs. Among his peers, he's admired for his technical brilliance and beloved for his generosity of spirit. Through works as varied as the album art for Jethro Tull's The Broadsword and the Beast to conceptual designs for the Star Wars films, his visions have entered the dreams...and nightmares...of millions the whole world over.

The man himself is a bit of Trickster, in the classic mythic sense: both straightforward and elusive, down-to-earth and otherworldly. No one could be more honest, open, and engaged when you meet him face to face, yet beneath that openess are layers it can take many years of friendship to penetrate, with further layers beneath where only the artist himself may roam. Articles about him don't even agree on whether he's American, Canadian, or Scottish..and the truth is that he is all these things, holding passports to all three countries. He currently lives in a house high in the trees of Victoria, in British Columbia, with his wife Lenor. They have two grown children, Mishi and Inigo, both of them artists themselves. 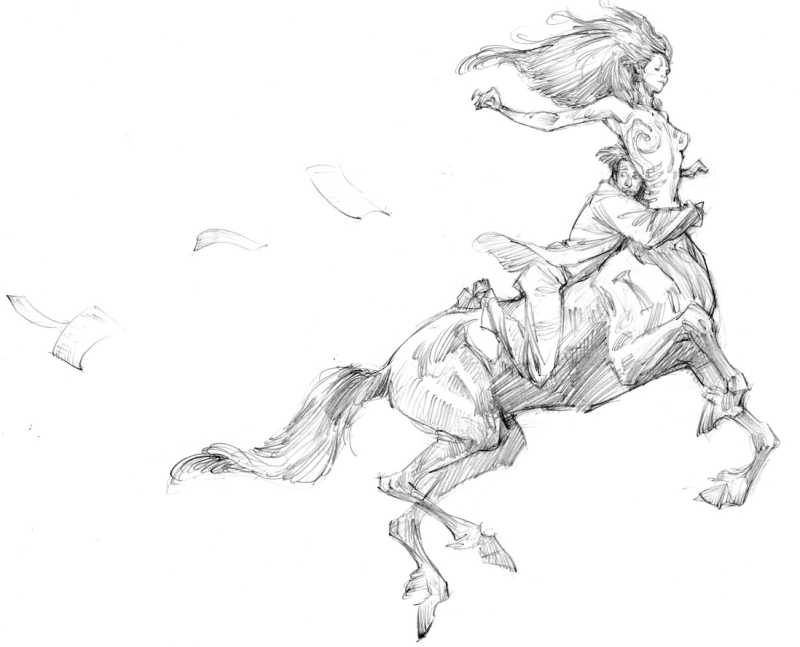 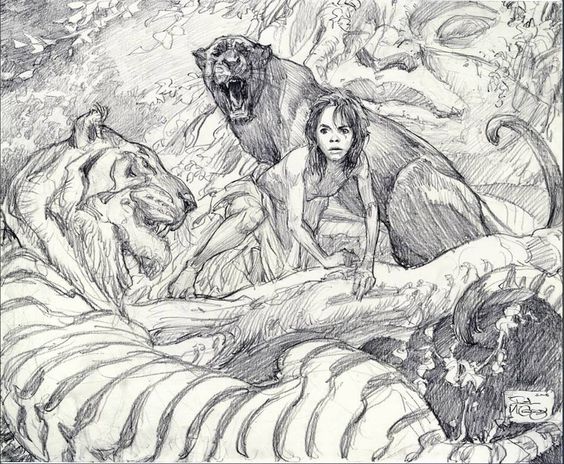 Iain was born in California in 1957, but spent most of his childhood in Canada. At 14, when his family moved back to the States, Iain persuaded his parents to let him stay behind in Canada to finish his schooling -- and it was then, left alone in a big family house with a film camera and time on his hands, that he began to make his first films. He had planned to be a writer, not a visual artist or filmmaker, but now a new path unfolded before him, leading a whole new direction.

When high school ended, Iain moved to Scotland to study art at the historic Glasgow School of Art, best known for its association with Charles Rennie Mackintosh and the Scottish Art Nouveau movment. Upon completion of his studies, Iain moved to London, spending seventeen years in Europe in total -- focused on illustration while casting sidelong glances at the world of film. 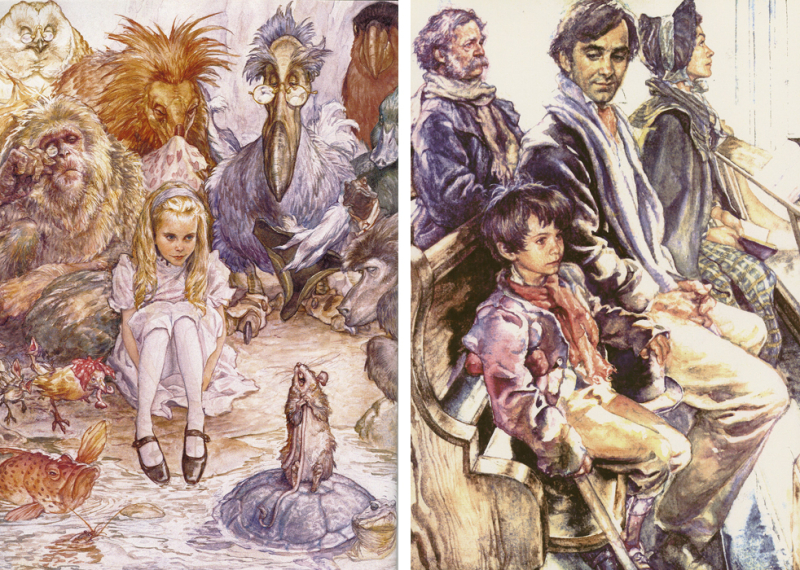 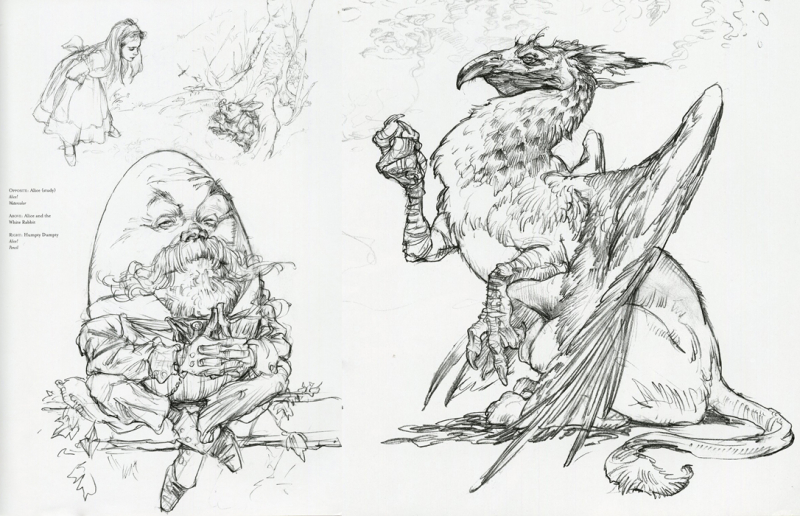 His first foray into film was a summer job working on Sesame Street cartoons, and a trailer for an animated feature called Twice Upon a Time. But it was a decade later, when he moved from London to California, that his film career took off in earnest and brought him to where he is today: recognized as one of the leading conceptual designers in the feature film industry.

He's best known for his work as a principle designer for the first three films in the Star Wars saga, where he created landmark designs for Darth Maul, Queen Amidala and many other characters. The long list of other films he has worked on includes James Cameron's Terminator II, Steven Spielberg's Hook, Francis Ford Coppola's Dracula, Neil Jordan’s Interview With the Vampire, Sony/Revolution/Universal’s Peter Pan, Warner Brothers’ Harry Potter and the Goblet of Fire, and both the Paramount Pictures’ and Disney/Pixar’s versions of John Carter of Mars. He was also co-producer and concept design director on Outlander, the science fiction epic from Ascendant Pictures. 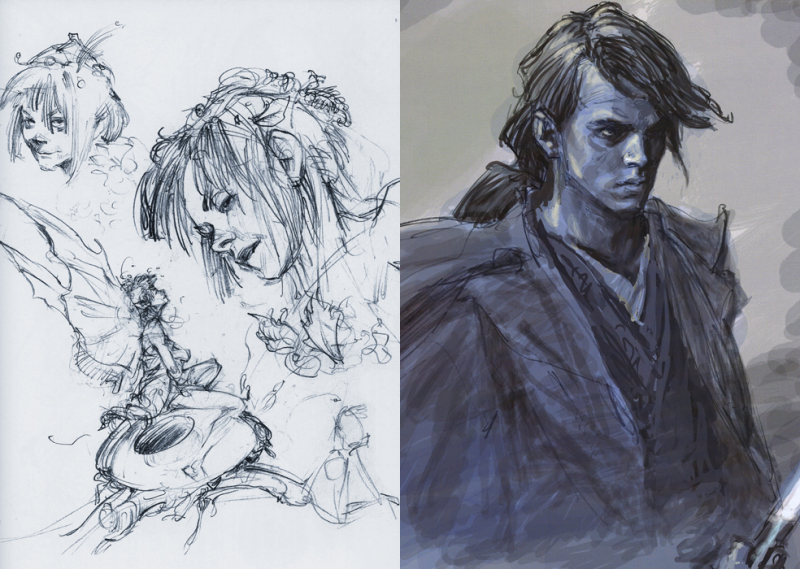 Iain made his directorial debut with a children's film, The Face, which won the Gold Medal for Best Family Film at the Houston International Film Festival and a Year 2000 Notable Video award from the American Library Institute. He wrote and designed his first CG feature film, The Pied Piper, for Imax/Mainframe in 2001. And in 2005, he founded Ninth Ray Studios, a freelance design group that has handled development and preproduction work for a number of major motion pictures, including The Spiderwick Chronicles.

At the same time, he's continued to illustrate books, and to teach and lecture widely. His art has been exhibited at the Smithsonian and in galleries around the world. 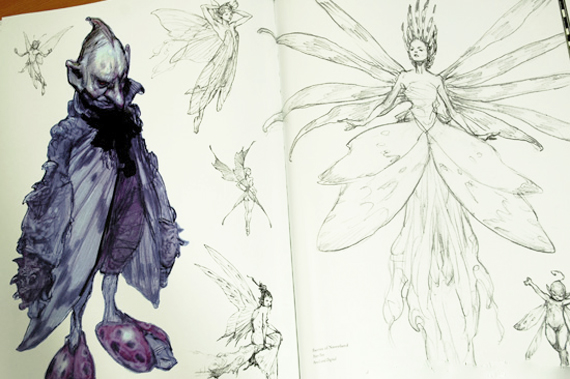 As can be seen from this list, Iain is a man with huge reserves of creative energy, drive, and passion. One rarely sees him tired, overwhelmed or discouraged. Embattled, yes, as he wrestles with deadlines or labors to move a project forward against opposition; but discouraged, no. Nor is there a drop of cynicism in his entire makeup. Iain doesn't define himself as an artist but as a "visual storyteller," which explains why he shifts so easily and so happily between many mediums. Whether painting, writing, or directing a film, he is always focused on telling a story. Stories bubble out of him constantly, surrounding him in a silvery aura and trailing behind him wherever he goes. With every job he approaches, every idea he explores, his gaze is locked on the story at its core, whether he's bringing another writer's story to life or creating one of his own.

"My higher calling is to serve the story," I have often heard him say. "I never just make images. The images are there to tell stories." 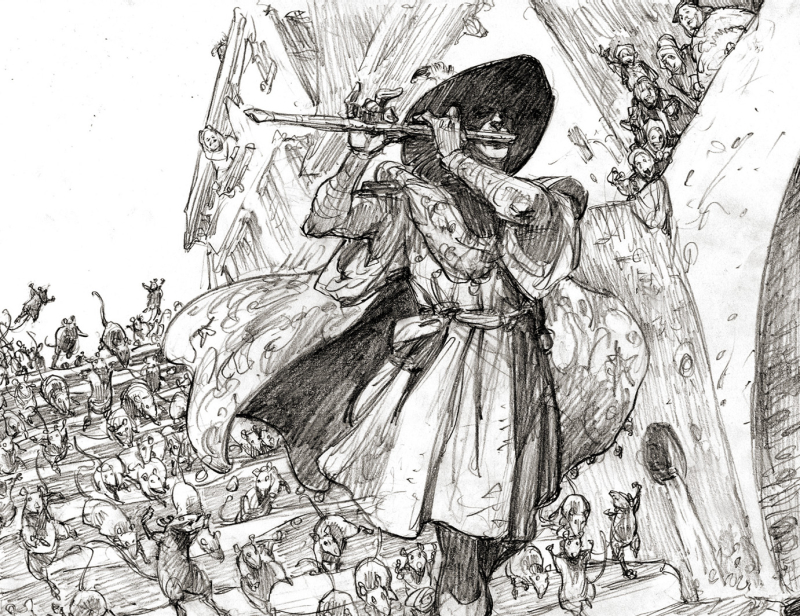 Despite the lightness of his own spirit, Iain also relishes nightmares, monsters, and tales of the dark. "Darkness," he says, "is one of my favorite places...perhaps because I am so opposite. I had a ridiculously happy childhood. My parents stayed together until I was grown. Everyone seemed to love me. I had a lot of friends. It was very hard when I first tried to write fiction, because I didn't have any dark experiences to draw on. I had to imagine my evil; I had to imagine all the bad things that could have happened to me, but didn’t. And yet, imaginary fears can be just as strong as the real ones...in fact, maybe even stronger. The imagination turns the threat you can't see into exactly the thing you are most afraid of most. I don’t think dark stories are bad for us. I think we need them, we love them, because of the contrast they make with the rest of our lives. They make the good moments better and brighter."

There's a famous story about the time George Lucas delivered his script for Star Wars Episode One to the art department at Skywalker Ranch. It contained a new Sith Lord named Darth Maul, described as "a vision from your worst nightmare."

"That was I needed," says Iain. "I sat down and drew my worst nightmare: an unseen presence watching me from the shadows, with glittering eyes and metallic teeth and red ribbons falling over its dead white flesh like rivulets of blood. I put the picture inside a folder and, at our next meeting, slid it over to George.  He took one horrified look, slapped the folder closed and slid it back to me. 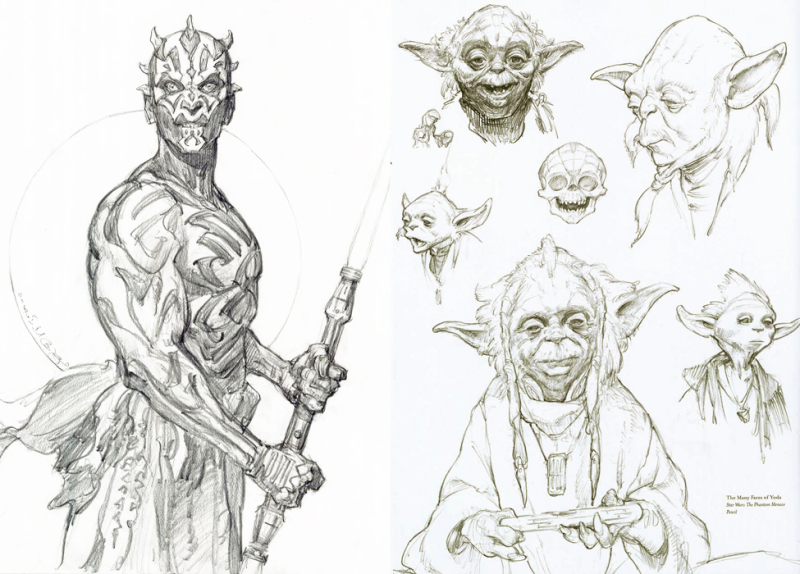 In 2008,  Insight Editions released Shadowline: the Art of Iain McCaig, an astonishing art book covering twenty-eight years of Iain's commercial and personal artwork -- from Star Wars and other film concept art to dinosaurs, otters, monsters, fairies, and Alice in Wonderland. The text, by Iain, is a story of course: a fictional journey to his studio in the magical world of the Shadowline.

The Shadowline, he writes, "is the place where things meet. Light and shadow. Hope and despair. Good and evil. It's a universal watering hole. Ideas gather there. So do artists." 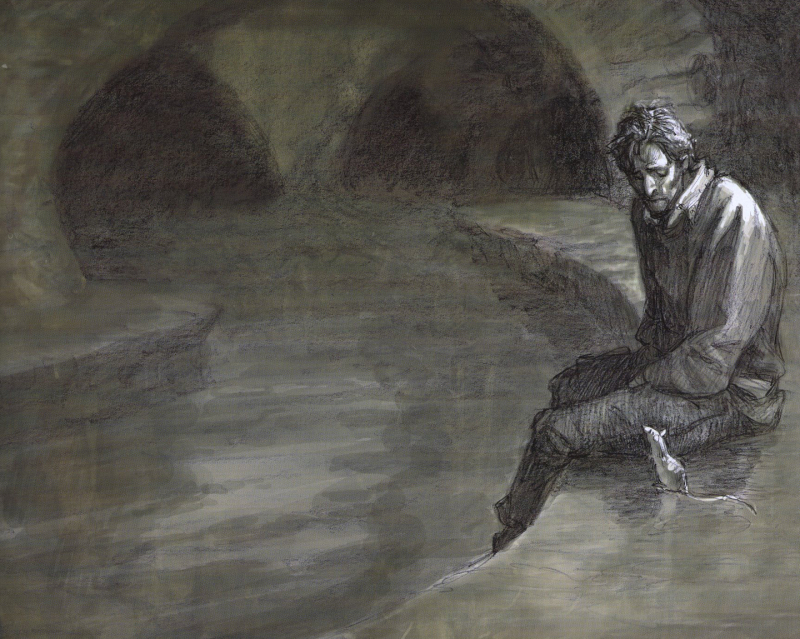 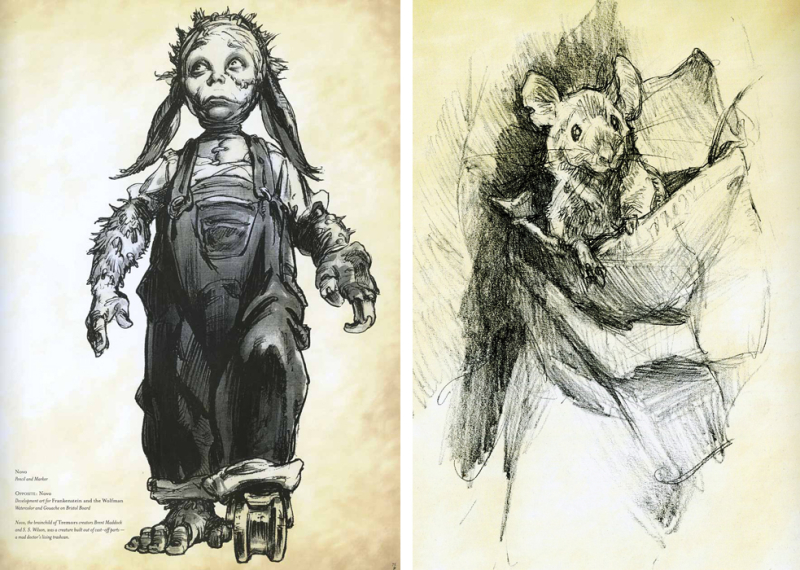 The book covers all the different facets of his career, including his dedication to the fine art of teaching. It is Iain's contention that art is a language, and as such it's one that each one of us can learn. We might never become as fluent as Michaelangelo (or, indeed, as Iain himself), but we can all learn to tell visual stories through the regular practice of some basic techniques. Iain shares his approach to the drawing board through popular classes, workshops, DVDs ... and also one-on-one with virtually everyone he meets through his work and his travels. You can often find him bent over a page showing someone that yes, they too can draw -- both for their own pleasure and to better understand the visual world all around them. "We are wired to tell stories," he says, "visually, verbally, any way we can. The more stories, the more tellers, the more points of view, the better for all of us." 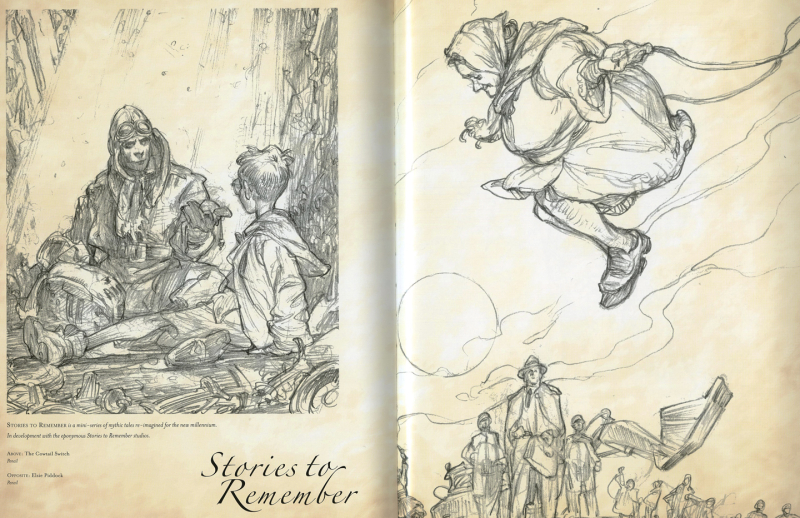 So if, as Arnie Fenner states, a Grand Master can be recognized by the influence they have on others and the number of people that they have inspired, then Iain is very Grand indeed. I should know, for he has inspired me and sharpened my vision for over two decades. And he's still going strong, trailing stories wherever he goes.....

Catch one if you can. 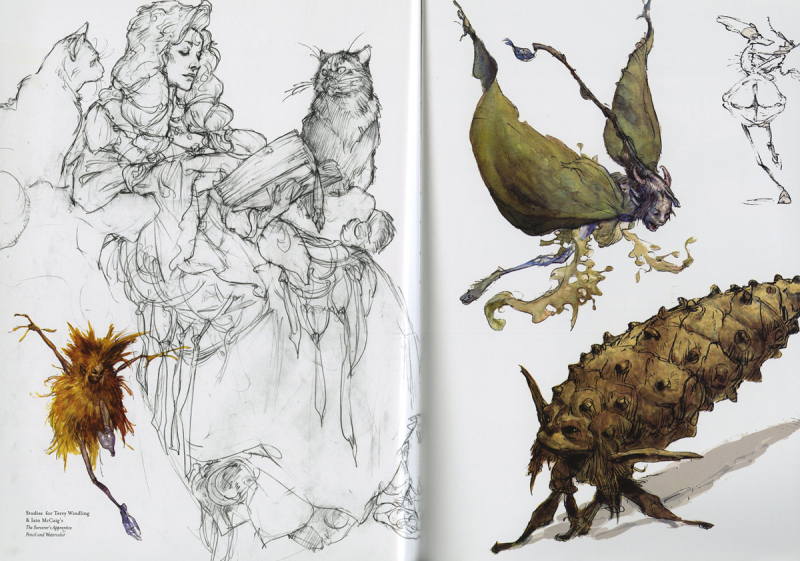 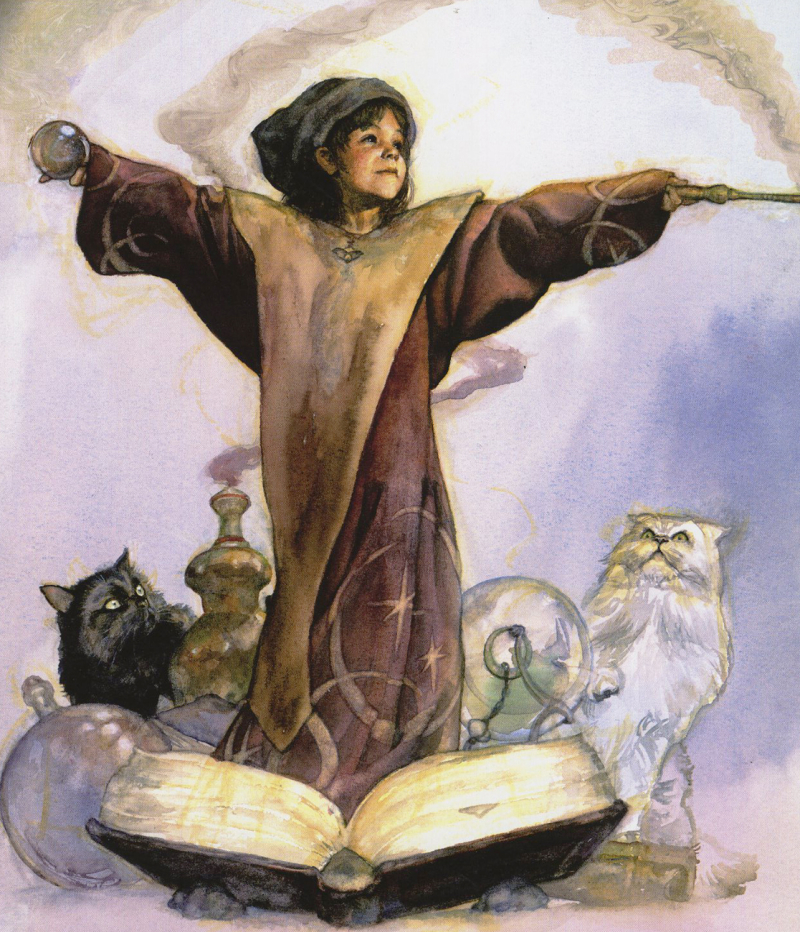 The paintings and drawings above are under copright by Iain McCaig, and may not be reproduced without his permission; all rights are reserved by the artist. The artworks are identified in the picture captions. (Run your cursor over the images to see them.) To learn more about the artist, visit his blog, or seek out Shadowlines: The Art of Iain McCaig (Insight Editions, 2008).

This piece on Iain McCaig was published in Spectrum 21: The Best in Contemporary Fantastic Arts, edited by John Fleskes (Flesk Publications, 2014). All rights reserved by the author and publisher.