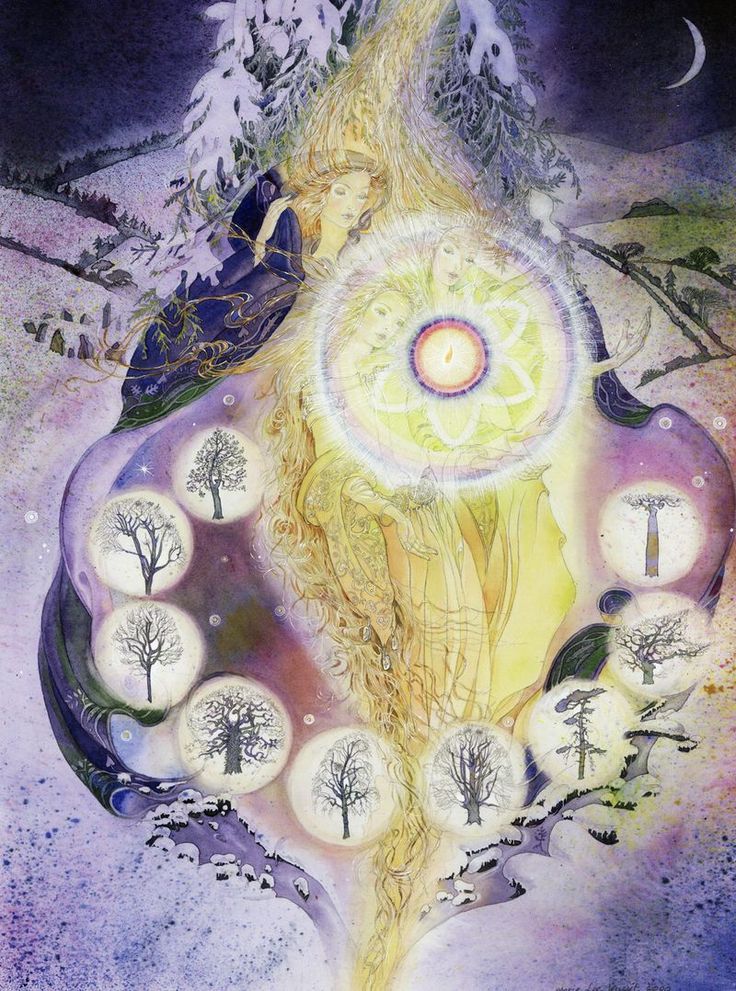 Marja Lee Kruÿt was born and raised in the Netherlands in the province of Drenthe: a beautiful, dolmen-studded region in the northeast of the country, near the German border. She spent five years studying fashion illustration design in Amsterdam, and at the age of twenty she embarked on a professional career as a fashion illustrator. In 1964, Marja moved to London, where she created fashion drawings for major stores in England and abroad, as well as for newspapers and magazines such as Vogue and Harper's Bazaar. She was also involved in the ballet — both as a dancer and as a costumer for various productions -- and she made clothes for a Plimlico boutique that catered to the likes of Marianne Faithful, Mick Jagger, Pete Townsend, and Brian Jones. (Faithful was often photographed during those years in a cape Marja designed for her.) 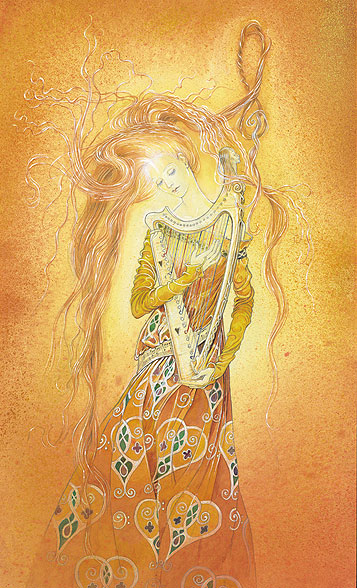 While she was living in London, in a flat above Quentin Crisp's, Marja met her future husband, Alan Lee, a talented book illustrator. In 1975, the couple moved to a rural village at the edge of Dartmoor, sharing a house with their friend and fellow-artist, Brian Froud.

Brian Sanders described the house in 1977 (in the book The Land of Froud):  "From the outside the house is a modest Victorian cottage set back from the street in a tangled garden. From the moment that one crosses the threshold, guarded by a moss and lichen jewelled hand pointing skywards, from amid a welter of muddy wellington boots, a different land begins. Two families, the Lees and the Frouds, live here: the real Lee children side-by-side with Brian's family, the Troll King, his brother, and their mother. The mother has a hand in her back, and when Brian holds her they become one. The puppet fits to him and there is a deep affection between them: Brian the wizard surrounded by his animate creations, discussing them with a child who believes in them as much as he does. Walls, shelves and floors are crowded with books, toys, found objects and constructions. Ghosts, faeries and pictures of goblins abound." (It was during these years that Alan and Brian produced their now-classic art book, Faeries.)

Meanwhile, Marja continued to pursue her London-based illustration career until her children were born, but afterwards (like so many other women artists of her generation) her fashion work was set aside while she raised her children, and provided admin support for her husband's busy career. Yet even during those years focused on running a household, her creative powers did not lie dormant. She created costumes for local theatrical productions, and for figures sculpted by doll-artist Wendy Froud; she drew portraits, designed hats and clothes, and studied the Celtic harp...all while excelling in the area Grace Nuth has dubbed domythic art: bringing myth, magic, and romantism into every aspect of domestic life. 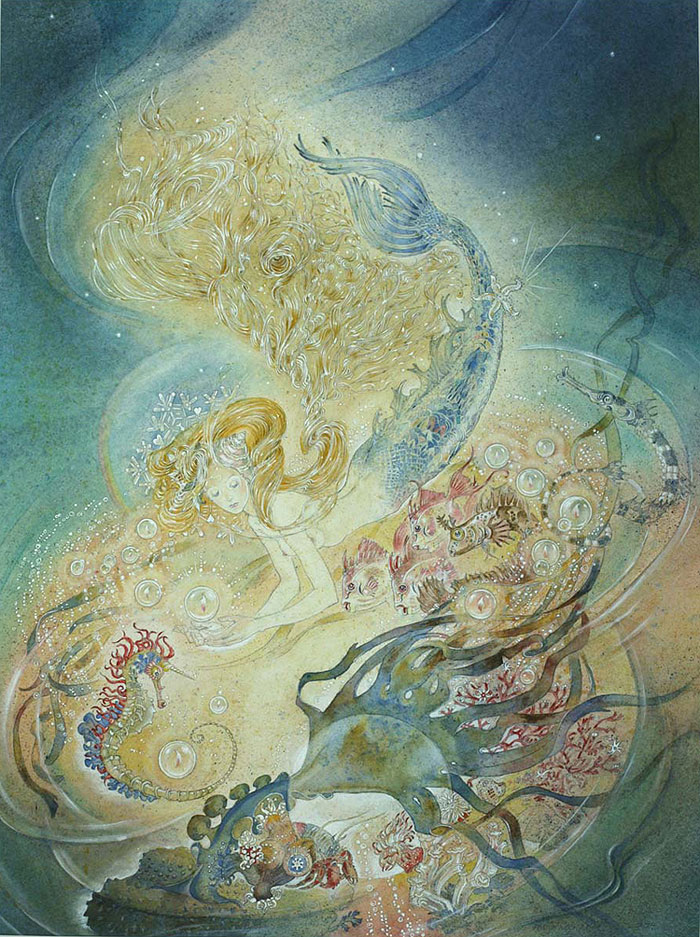 In 1998, her children grown, a new chapter in her life began when Marja returned to the studio. The work she produced was astonishing: drawings and paintings with a rich maturity of vision that had been quietly brewing over all those years, emerging like dreams, straight from the subconscious, each one a treasure of mythic art.

"I've always been interested in dreams," she says. "And in myth, mysticism, and symbolism. Through the use of color, of line, of the symbolic nature of garments, objects, patterns, and flowers, I attempt to create pictures that work on many different levels: marrying our everyday reality with other planes of dream and intuition. Painting, to me, is soul work, healing work. It's a kind of meditation." 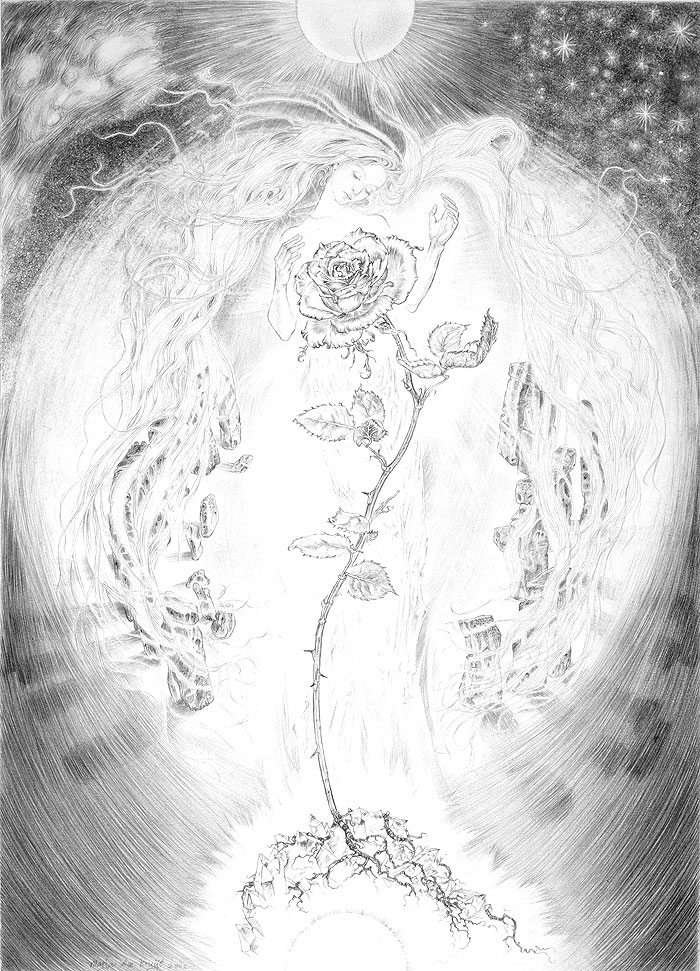 Her painting practice is a spiritual one, craft and technique in service to spiritual intent.

"I begin each picture with a ceremony," she explains, "opening myself to the picture's theme and asking to be given the symbols with which to represent that theme. It's important to stay wide open as I work, to let the images come through me, unforced, shapes and colors emerging intuitively. It's a slow, deep, painstaking process, and a single picture can take me several months -- working out the composition and colors by doing many drawings and watercolor sketches first. Each part of the picture must be right; each element has an individual meaning, yet must also be woven into the rest of the design. I often use Celtic patterns, for instance, which represent the way things weave together in life -- and the way that our lives in the here-and-now are woven with other dimensions of consciousness.

"Flowers, animals, stones -- all these pictorial elements must work as part of the painting's composition, but have symbolic meanings as well. The specific flow and movement of a garment, for instance, can represent different aspects of spiritual awareness. I draw upon Celtic symbols...Eastern symbols...Steiner colour theory...Perelandra essences...mandalas...whatever the picture calls for. Watercolor is a fluid medium and I strive to work with, not against, the flow. That may sound airy-fairy but it's not, really; watercolor is a medium that requires technical precision too. In art, as in life, we must be grounded and free-flowing, intuitive, all at once. I suppose making pictures in this way, like any spiritual practice, is really all about balance." 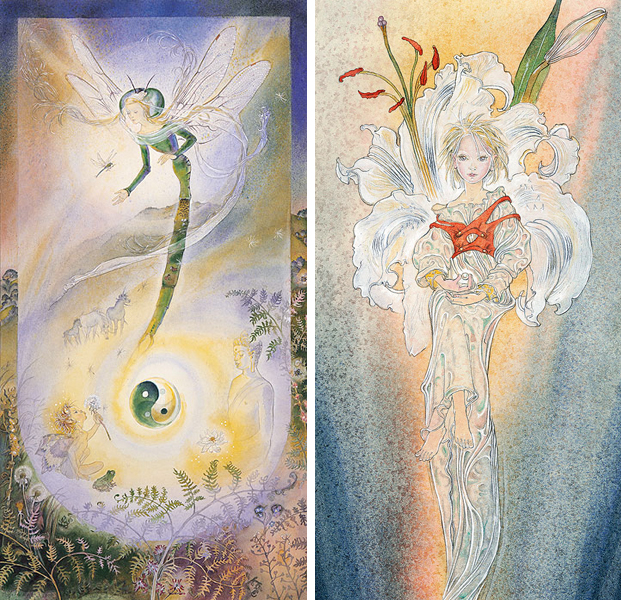 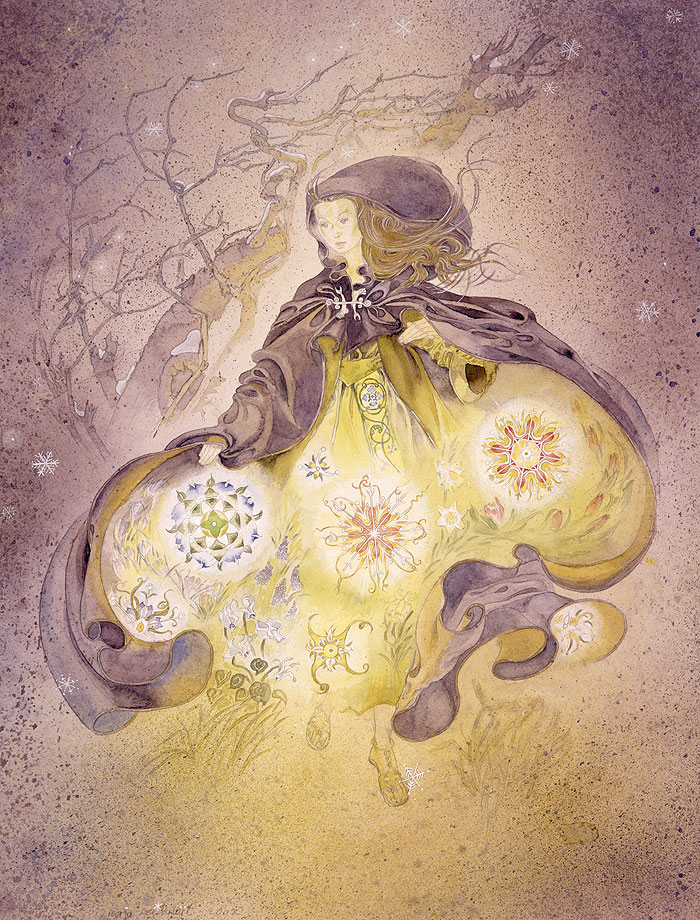 "My background in fashion illustration is probably evident in my paintings, as well as my love of music and harps. I also like painting children, representing that childlike part within each of us. And fairies. Living here on Dartmoor, fairies were bound to turn up in my pictures!

"I have always loved the Victorian 'fairy painters' and book illustrators, such as Arthur Rackham and Edmund Dulac, as well as the Pre-Raphaelites: William Morris, Burne-Jones, Rossetti. But the artists who have influenced me the most are Gustav Klimt, Sulamith Wülfing, and the Renaissance painters Sandro Botticelli and Benezzo Gozzoli -- particularly the angels. Wülfing's influence is probably the most apparent. I feel an affinity with her. She drew angels even as a little girl, often talking about her angels and guides, and was influenced by Krishnamurti, the White Brotherhood, and the Theosophical Society. She was a mystic, really, and expressed her mysticism through her art. There are things that we can portray through pictures and symbols that we can't convey as easily through words. Art can speak directly to the soul. Wülfing's best pictures do this -- as do some of the great religious pictures from the Renaissance. 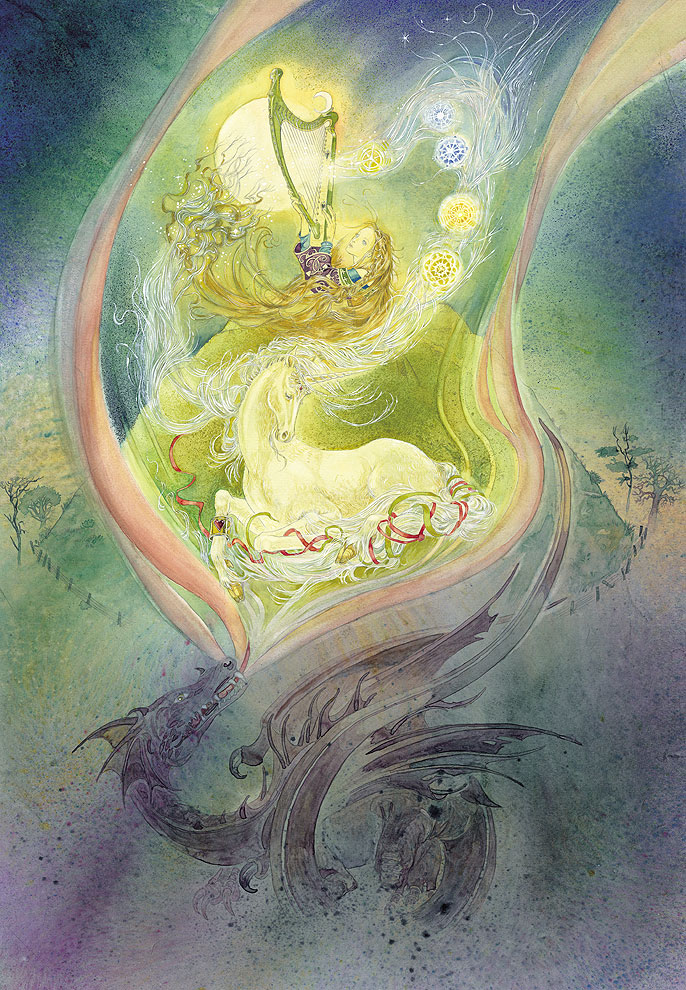 "I think art can be healing, moving, enlightening. It can also be puzzling, disturbing, or even upsetting...and sometimes that is necessary. It wakes you up. When you live with a picture, when you keep looking at it and taking it into yourself over a period of time, it can change you: moving you from one way of thinking to another, from one level of consciousness to the next. I like pictures that make you keep on looking, that reveal themselves and their meanings slowly. Art that keeps on giving you more, and a little more, every time you look."

Marja works from an exquisite painting studio at the back of a "secret garden," tucked away at the end of a path behind the old stone building where she lives. It is from here she does her "soul work," weaving painting and spiritual practices into a life lived on many levels at once. She creates magic on each one of those levels, and trails beauty behind wherever she goes. 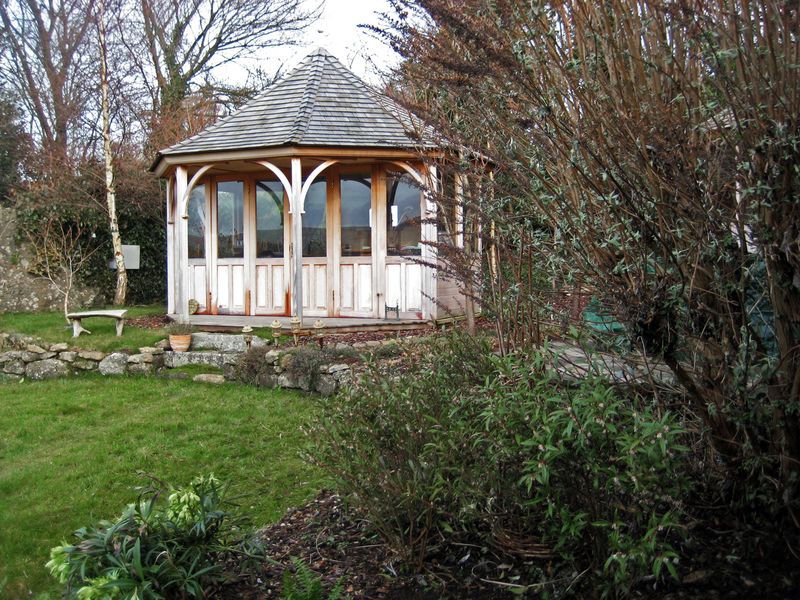 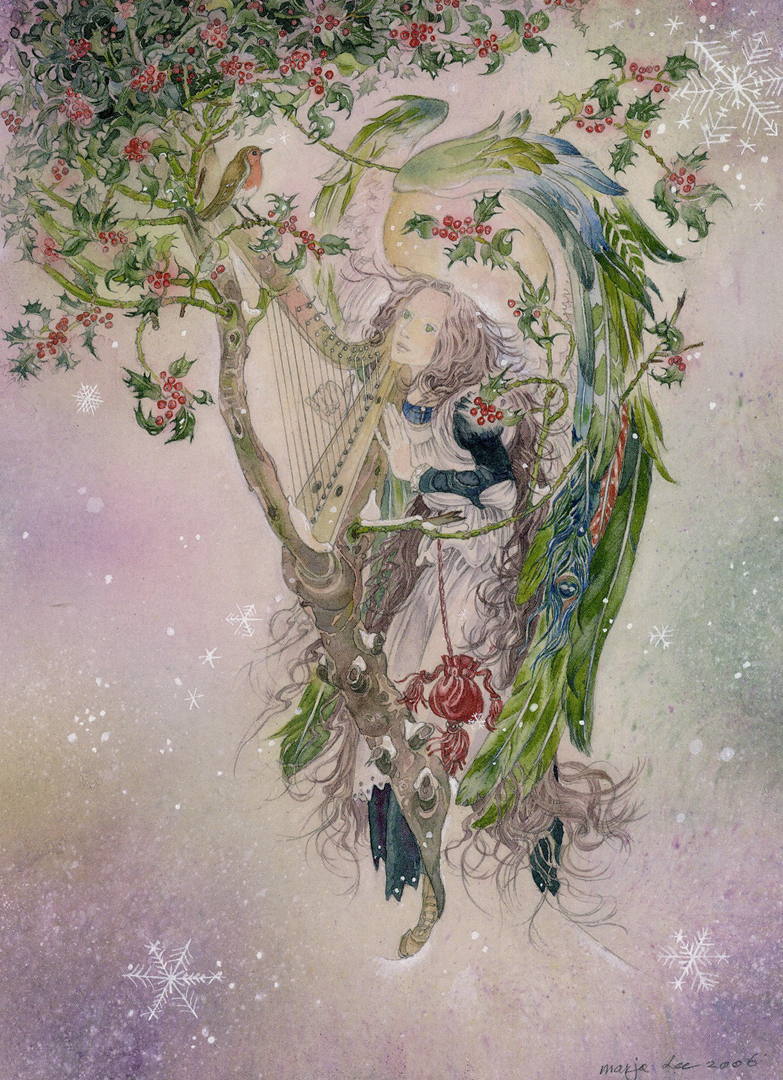 "The job of the artist is always to deepen the mystery." - Francis Bacon 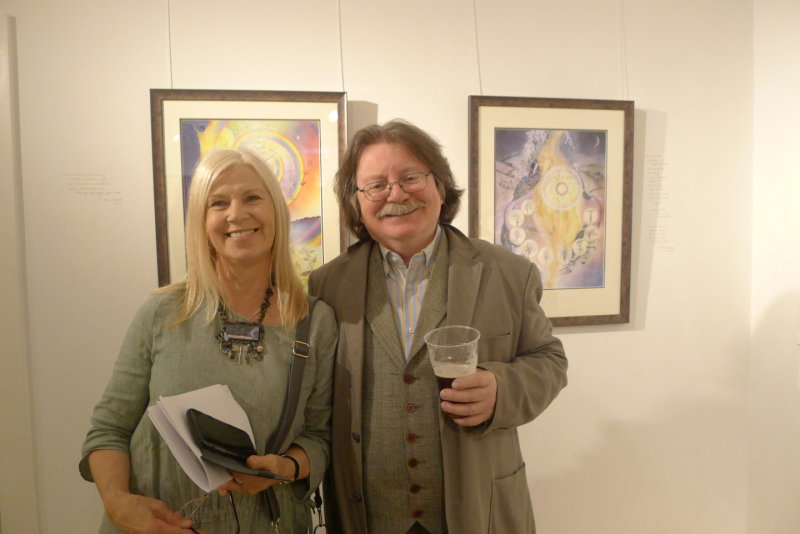 The paintings and drawings above are under copright by Marja Lee Kruyt, and may not be reproduced without her permission; all rights are reserved by the artist. The title of each artwork can be found in the picture captions. (Run your cursor over the images to see them.)

The Brian Sanders quote is from The Land of Froud (Peacock Press/Bantam Books, 1977).

The text by Terri Windling first appeared in The Journal of Mythic Arts; all right reserved by the author.