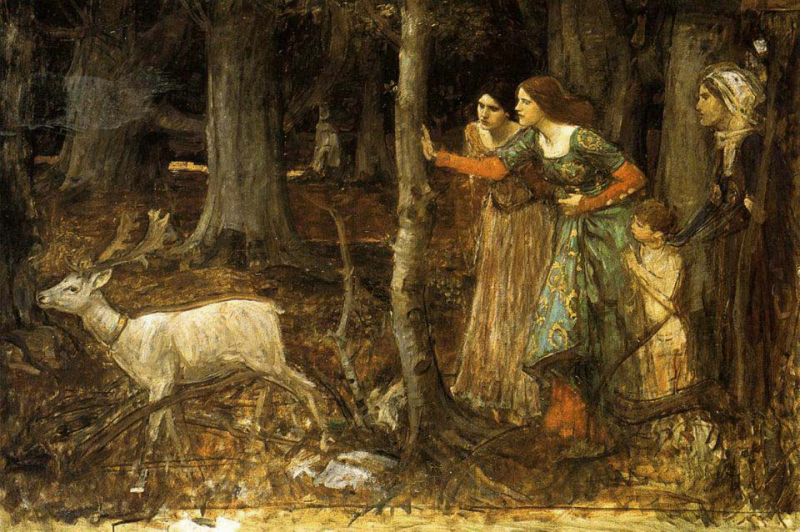 The act of creation, it has always seemed to me, is one of the great magics of our world -- an ancient magic, guarded by the gods, blessed (and coveted) by the fairies. In mythic cosmologies found around the globe specific gods are associated with each of the creative arts: building, weaving, instrument making, theatrical productions, etc., and these gods must be petitioned for their aid, or propitiated against their hindrance. Ancient poets, dancers, musicians, storytellers used their gifts to cross over the boundary lines separating the human realm from the spirit realm and the lands of the living from the lands of the dead; artists performed an almost shamanic function, creating new worlds, new ideas, new realities.

In many ancient cultures, the creative arts were used (both literally and metaphorically) to heal, blight, praise, curse, celebrate, lament, and renew. Inspiration could be sought through one's genius, which was a personal spirit-guide in Greek mythology -- or through the Muses, those lovely daughters of Zeus and Mnemosyne (memory): Clio (history), Euterpe (lyric poetry), Thalia (comedy), Melpomene (tragedy), Terpsichore (dance and song), Erato (love songs), Polymnia (divine hymns), Urania (astronomy), and Calliope (epic poetry).

In Celtic lands, the Leanan-Sidhe was a faery mistress who inspired poets with her touch -- but if misused, her powers could burn too brightly and lead to an early death. Likewise, the White Deer Woman of Cherokee tales inspired poetry and song, but only to those who show showed her respect as she roamed through the woods in deer form.

In the fields of fantasy literature and mythic arts, many of us still seek our inspiration deep in the archetypal forest, following trails blazed through the centuries by the writers and artists who have gone before. We chase the white deer through Shakespeare's fairy plays; through the French and German fairy tale salons; through the poetry of Keats, Goethe, and Yeats; through the visionary dreams of the Pre-Raphaelites, the Symbolists, the Surrealists; and through a wide, wide range of magical writers from George MacDonald to Angela Carter.

The Muses speak to us not only through stories and dreams, but also through all the creative acts of life: making food, making love, making conversation, making community, making a poem or a prayer out of each moment lived. To some, creative inspiration comes only during life's quiet times; to others, when life is abundantly full -- and as artists, we must each learn our own individual ways of summoning the Muses. 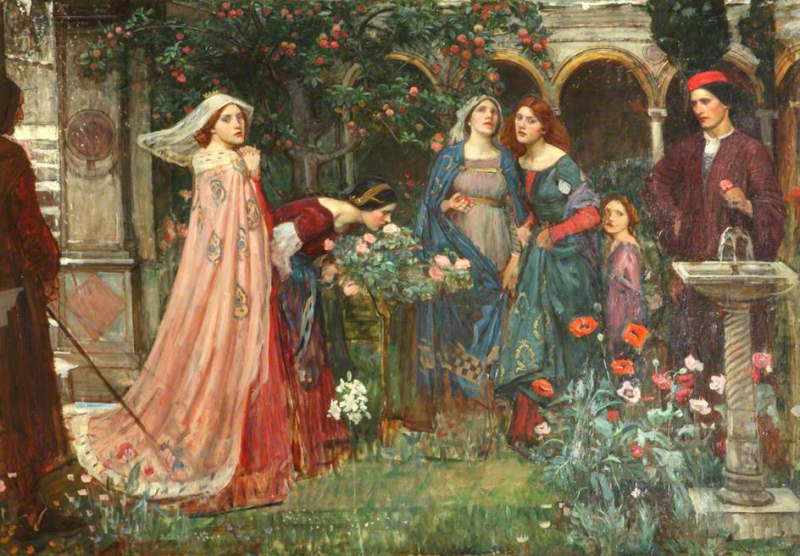 Perhaps, in this non-animist age, few leave out wine and flowers anymore -- but we still have our Muse-summoning rituals and talismans: the favorite pen or brand of paper, coffee in a certain mug, paints arranged just so on the palette, the email box emptied or the phone switched off or the desk surface cleared before we can work...all those small rituals we do each time, every time, in order to clear the mind, to focus, to prepare for the crossing from the physical world to the realm of imagination.

That moment of crossing is a mythic moment -- as potent as the old folk tales where the hero crosses running water (once, twice, three times) to enter Faerieland. Some days it is easy to make the crossing and to lose ourselves in the creative process; some days it is much harder; and we rarely know which kind of day it will be in advance. 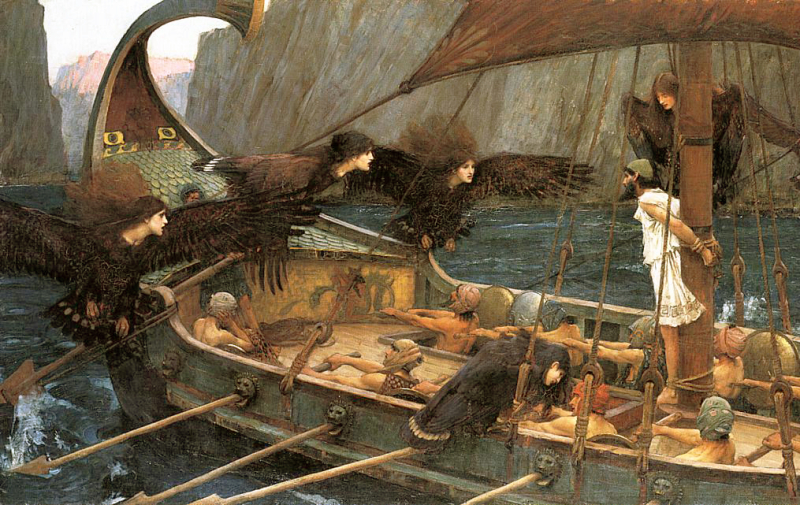 On the most difficult days, one can't cross at all -- as if Janus, god of the threshold, or Hermes, god of boundaries, stands firmly blocking the way. Occasionally I've recognized this "writer's block" as a necessary thing: a time to let the dry well of inspiration fill up with water once more. At other times, it feels like a banishment, and I fear that the gates might stay locked up too long.

"When I don't write," lamented Anaïs Nin (in 1966, at the height of her success), "I feel my world shrinking. I feel I am in prison. I feel I lose my fire and color. Writing is a necessity, as the sea needs to heave, and I call it breathing." 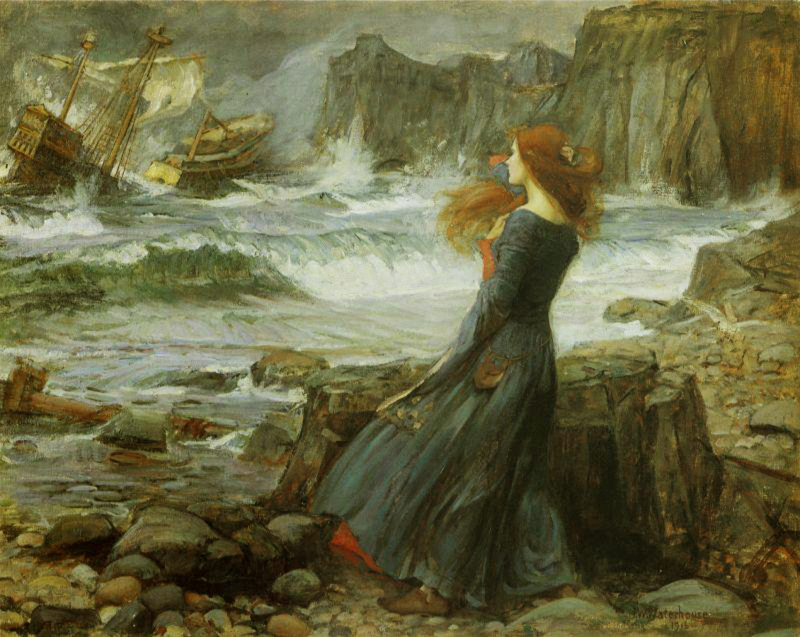 Sometimes it's not a lack of inspiration but a lack of time that interferes with one's ability to create. 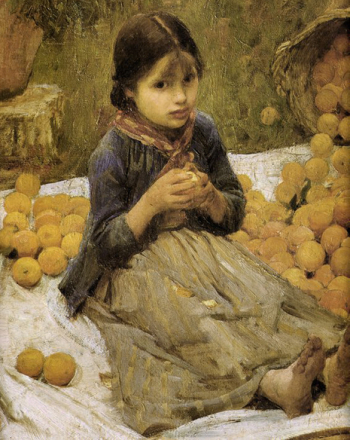 In May Sarton's splendid novel Mrs. Stevens Hears the Mermaids Singing, a poet's struggle with her Muse is often overshadowed by a deeper, less romantic struggle: the effort to push life aside long enough to actually get to her desk. Thomas Wolfe echoed this sentiment in his Autobiography of a Novelist. We can't wait for those perfect moments, he warns us, when daily life seems to melt away and nothing exists but the fire of inspiration. Those moments of grace are precious, but rare. Treasure them, he says, but don't depend upon them; for the rest of the time we must be able to work despite the bills clamoring for attention, the dog barking, the telephone ringing, and the mailman at the door.

In her inspiring essay collection The Gates of Excellence, Katherine Paterson has what is, for me, the last word on the subject of the artist's perpetual struggle to find a balance of time for both life and art:

"I had no study in [the early] days, not even a desk or file or bookcase to call mine alone. It might have happened sooner [the writing of work worthy of publication] had I had a room of my own and fewer children, but somehow I doubt it. For as I look back on what I have written, I can see that the very persons who took away my time and space are those who have given me something to say."

As for me, it's the richness of life itself that keeps luring me away from my writing desk...but, conversely, provides me with tales to tell when I find my way back again. Then, like all writers, I'm faced with that frightening and holy object: the blank white page. But it only takes one sentence, one word, to begin...and then, gods willing, the Muses come. 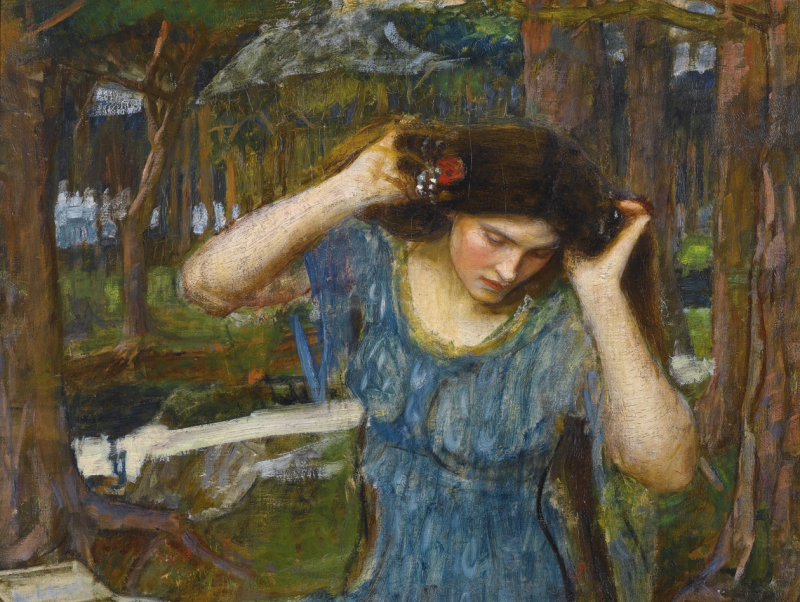 The art above is by John William Waterhouse  (1849-1917) , an English painter in the "second wave" of the Pre-Raphaelite movment. Picture titles are identified in the picture captions. (Run your cursor over the images to see them.)

The text above first appeared in The Journal of Mythic Arts, copyright c 1996 by Terri Windling. It may not be reproduced without the author's permission. For information on obtaining permission, please go here.