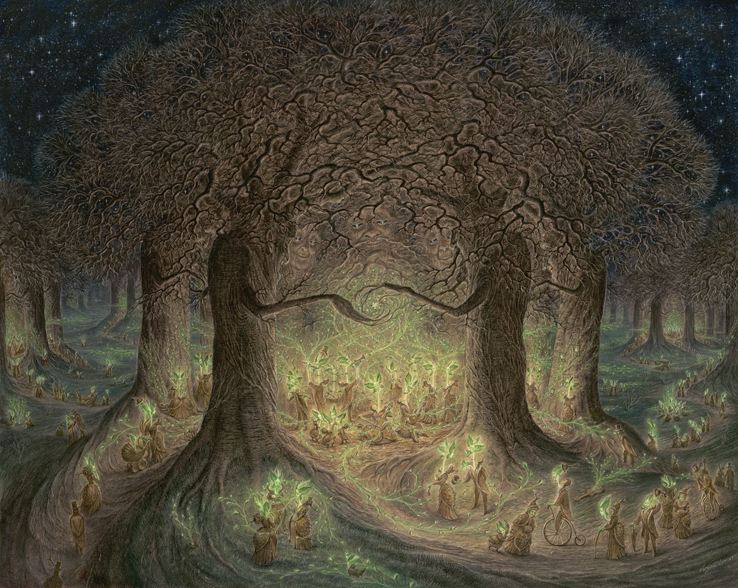 Virginia Lee is an English artist whose work is rich with symbolism drawn from myth, folklore and fairy tales, exploring the ways these symbols can be used to express themes of transformation. Her paintings, drawings, and sculptures blend elements of the Surrealist tradition with those of Victorian book illustration to create works depict the deep connections between women's lives and nature's cycles. Such visions come from the wilderness: the primeval forest in mythic quests; the endangered forests of our modern world; and the dark forests of the psyche, representing an inward journey through deep realms of the soul. 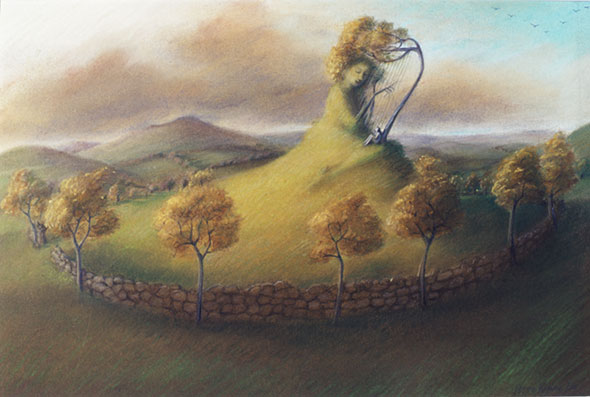 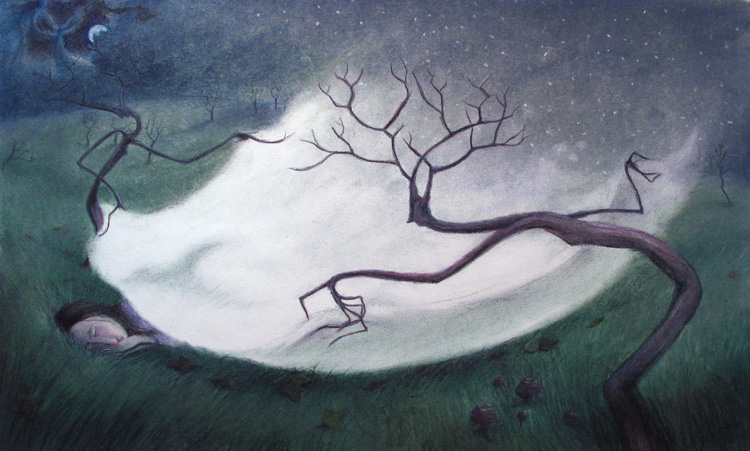 Virginia was born in England's West Country in 1976, raised in a small village full of artists on the edge of Dartmoor. As the daughter of English illustrator Alan Lee and Dutch painter Marja Lee Kruÿt, and with Brian Froud as a housemate when she was young, she grew up surrounded by the imagery of myth, fairy tales, and folklore. Although she shares a love of the mythic tradition, Virginia works in a style that is distinctly her own -- which is no mean feat when growing up in a household of well-known artists. 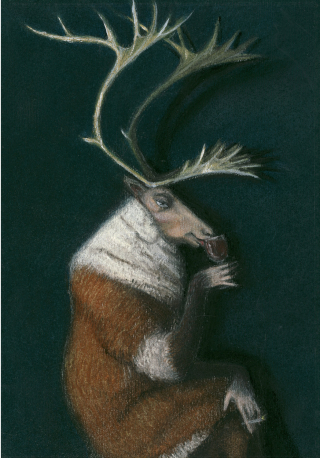 She studied Art & Design at Exeter College, then trained in Illustration at Kingston University, where she experimented with model-making and animation in addition to two-dimensional illustration. She completed her degree in 1999 with a Degree Show of paintings, drawings, and sculpture inspired by animal transformation themes in myth, folklore, and fairy tales.

After a stint in London working on illustration projects, Virginia traveled to New Zealand to work on the set of the Lord of the Rings films directed by Peter Jackson, sculpting architectural statues and details, as well as merchandise for the films. When this work was done, she returned to England and lived Brighton for a time, until Dartmoor called her home again. She's now settled in Devon, dividing her time between illustration work and mythic art for exhibition.

Virginia has published two beautiful children’s books, The Frog Bride (a retelling of the Russian fairy tale), and Persephone: A Journey from Winter to Spring, as well as contributing illustrations to other 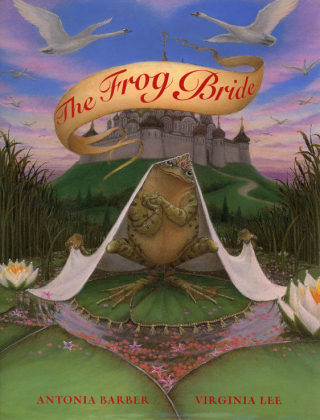 editions including The Secret History of Mermaids and Hobgoblins. She created the art for The Storyworld cards and for The Enchanted Lenormand Oracle deck, and her art has appeared in a variety of other publications. Her paintings, drawings, prints, and sculptures been exhibited in England, France, and America, and are collected on both sides of the Atlantic.

Virginia works with a range of media: pencil, charcoal, pastel, oil paints, clay, plaster, fimo, and other materials. Whatever the tools she uses, however, her style is a distinctive one, drawing a clear line from her powerfully emotive works to her more whimsical creations. The latter pieces are charming without being ethereal, well-grounded with an earthy, sharp, sly humor as the artist presents familiar folklore figures in unexpected new forms: a mermaid eyes a frog with frank suspicion; a swan cranes her feathered neck to examine her plump human derriere; an old woman's head opens to reveal the memories inside; mythic fossils line a faux-Victorian specimen box; fat fairies float blissfully overhead on tiny wings. 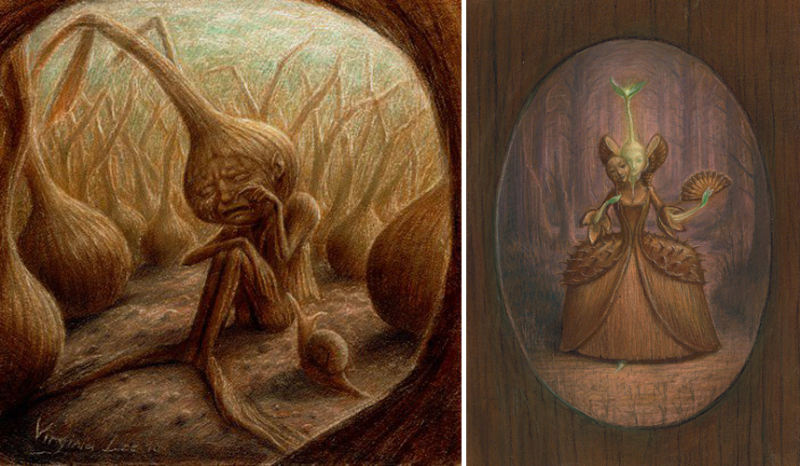 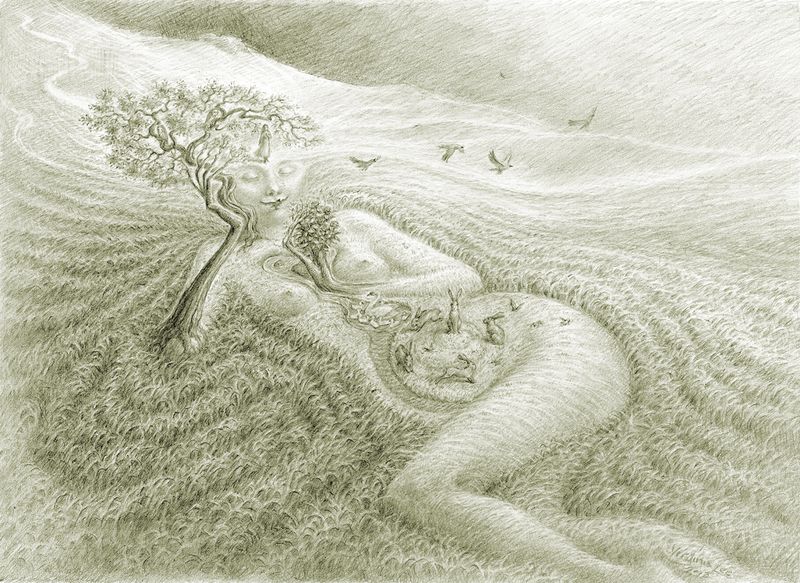 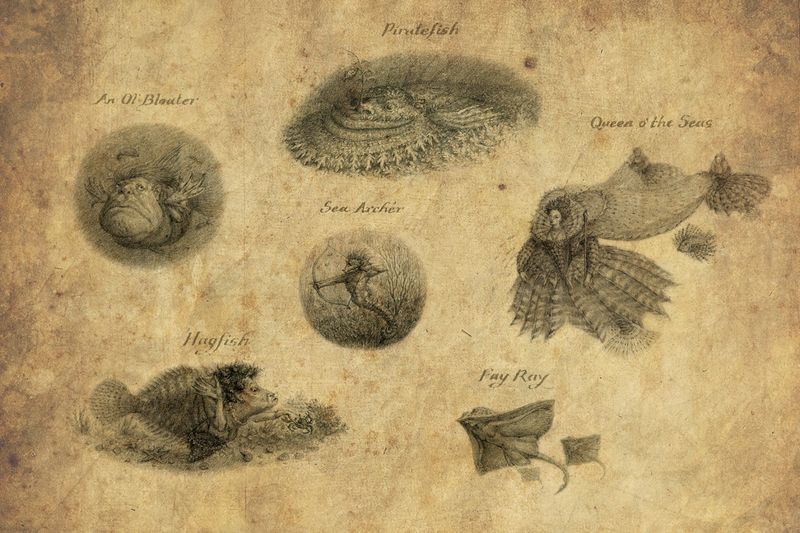 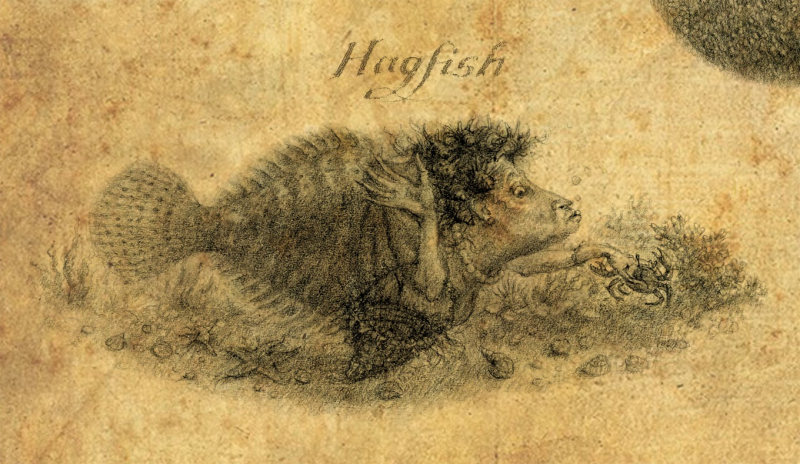 In whatever medium she chooses to work in, Virginia's art is multi-layered, psychologically astute, and imbued her deep understanding of myth. "I have developed my own visual language," she explains, "using themes of transformation to explore our connection to nature's cycles, creating realms where deep aspects of the psyche are embodied in folkloric characters and revealed in the mythic landscape." 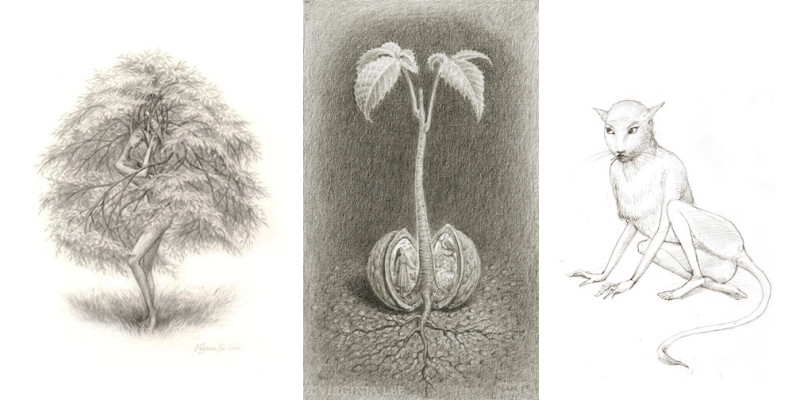 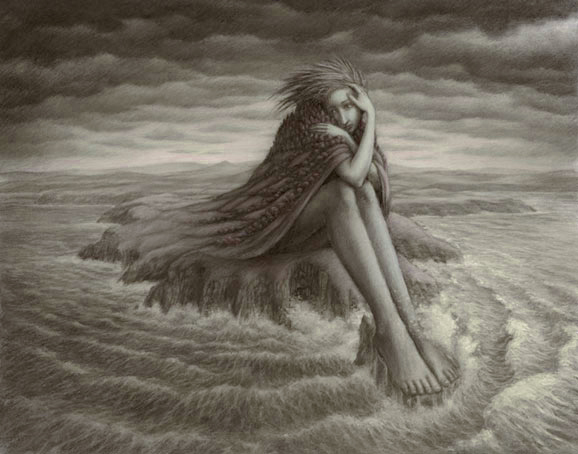 Her imagery is rife with such transformations: princess to swan, harpist to hill, man to animal, woman to tree. And as we view Virginia's work we, too, are transformed -- reconnected to the wonders of nature, to the oldest of stories, and to the wild, wild world. 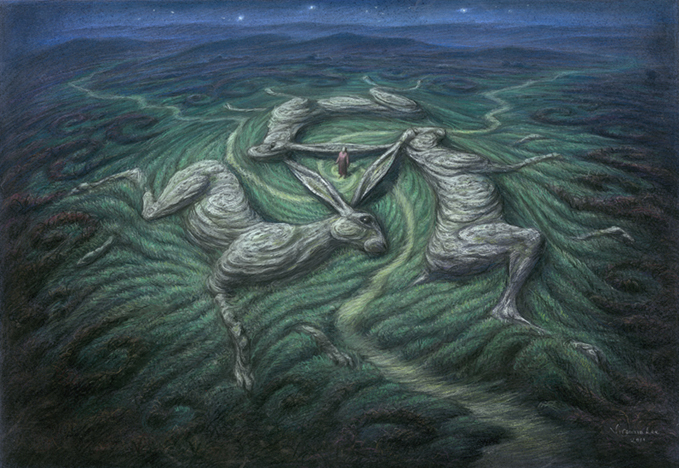 "Bone by bone, hair by hair, Wild Woman comes back. Through night dreams, through events half understood
and half remembered...."    - Clarrisa Pinkola Estés (Women Who Run With the Wolves) 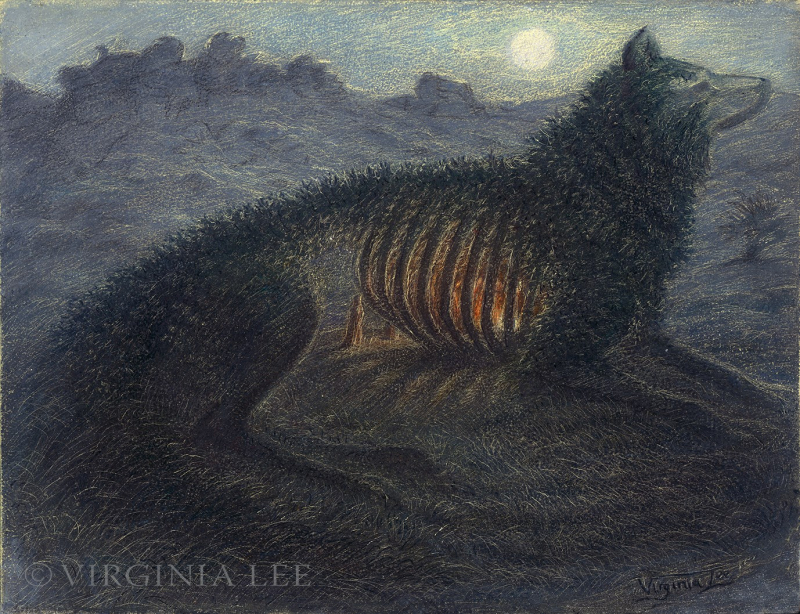 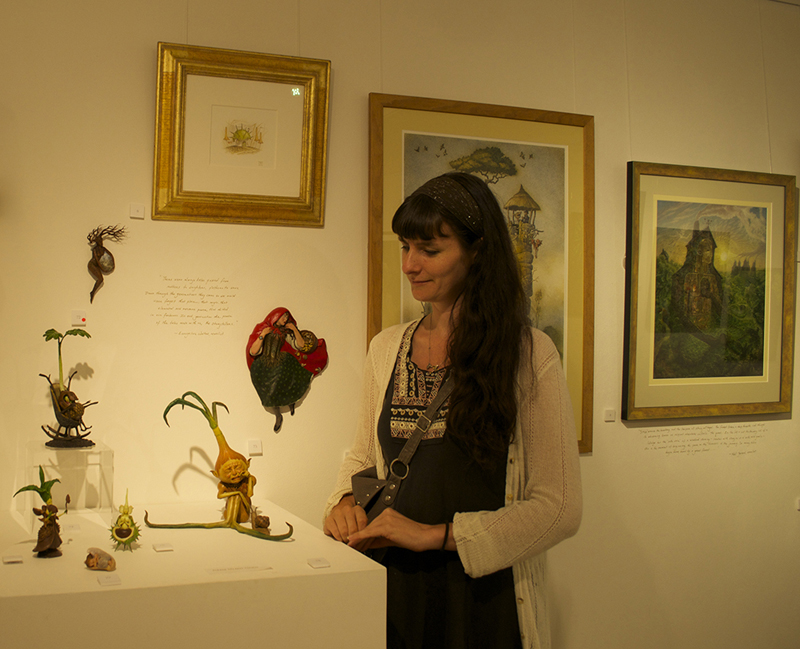 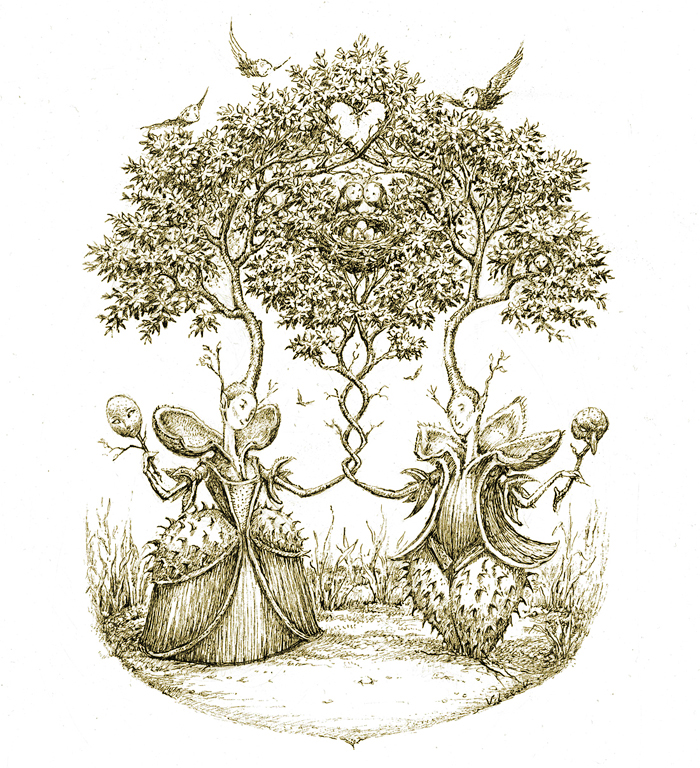 The paintings and drawings above are under copright by Virginia, and may not be reproduced without her permission; all rights are reserved by the artist. The title of each artwork can be found in the picture captions. (Run your cursor over the images to see them.) To see more of Virginia's work, visit her website and blog.

The text by Terri Windling first appeared in The Journal of Mythic Arts; all rights reserved by the author.